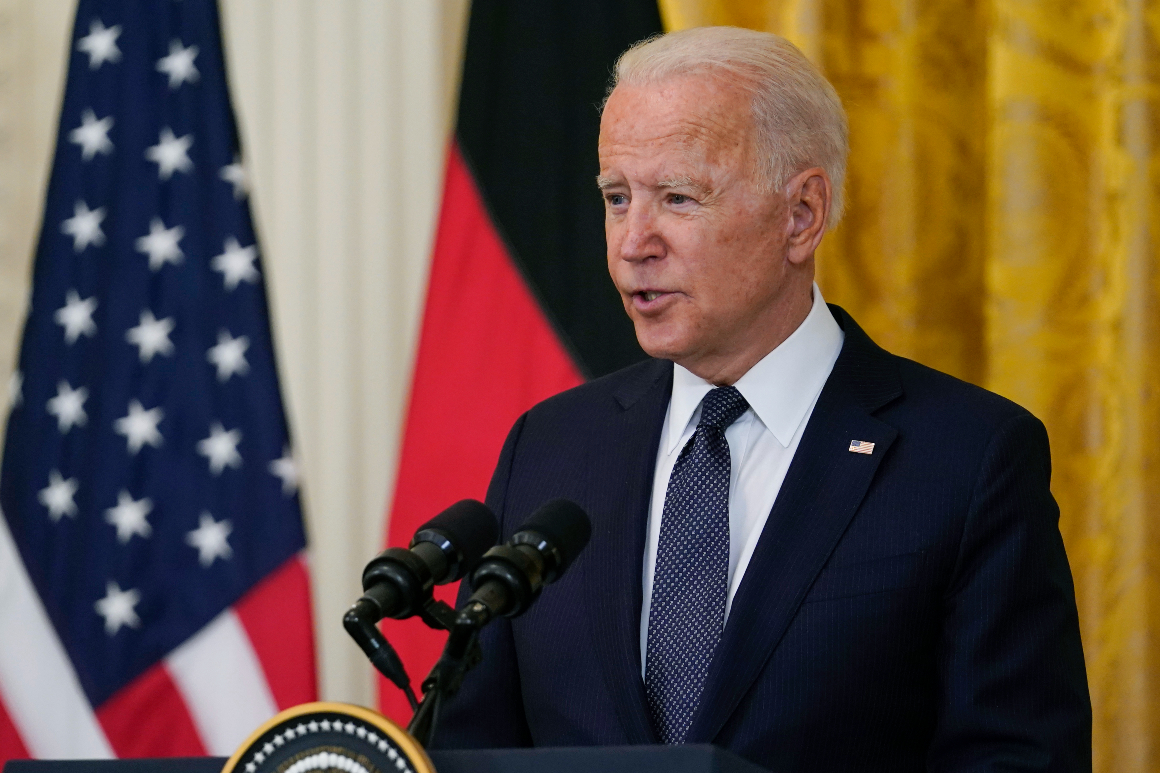 When it comes to ethics in the White House, President Joe Biden is no Donald Trump. But for a growing number of Democratic lawmakers and government watchdog groups, that’s too meager.

Six months into office, they’re pushing the president to follow through on his campaign promise to press for an aggressive 25-point plan for ethics reform, fearful that the window to do so may be closing — and with it an opportunity to prevent the lapses of the Trump years from happening again.

“There should be strong leadership coming out of the White House on the need for ethics legislation,” said Virginia Canter, chief ethics counsel at Citizens for Responsibility and Ethics in Washington, who served in the counsel’s office in the Obama White House. “But after what we suffered, in terms of the level of corruption we saw in the last administration, we realize that a lot of our norms, particularly with respect to presidential ethics, it’s not enough.”

Having campaigned on bringing ethical behavior back to the Oval Office, Biden made quick strides on that front. He established strong ethics rules for his own aides, banning them from receiving compensation from their previous employers, prohibiting them from lobbying the White House if they leave their administration jobs during Biden’s term and restricting gifts from lobbyists.

But executive actions only last as long as the president in office is willing to live by them. The longer lasting reforms, Canter and others say, come through legislative action.

So far, Biden has embraced a stalled election reform bill that contained ethics proposals in it. But he rarely emphasized the ethics part of that legislation. And he hasn’t publicly or privately pushed members of Congress to pass other laws that would encompass his campaign pledges — from prohibiting foreign governments from hiring lobbyists, to strengthening whistleblowers protections, to preventing Congress from being influenced by personal financial holdings — according to eight lawmakers, former presidential ethics advisers and government watchdog groups. With an evenly split Senate, Biden needs every Democratic senator and 10 Republicans to support any changes.

In the absence of that legislative push, a coalition of more than a dozen government advocates are urging Biden to appoint a senior White House official to oversee, enforce and communicate about ethics the way former Republican President George W. Bush and Democrat President Barack Obama did.

A White House official defended Biden’s efforts, saying his initial executive order included the toughest ethical standards of any president in American history and that the White House, including the president, counsel’s office, legislative affairs’ office and public engagement office, have been fighting to pass the For the People Act election bill. “We have been fighting incredibly hard for the For the People Act, which contains many reforms that the president ran on,” a White House official said, adding that every Democrat voted to advance the bill based on those efforts.

“We remain committed to everything that he ran on,” the official said. “We are not six months into the administration and we took office during a time of unprecedented crisis. This is a high priority.”

Since that first executive order, Biden has pursued other priorities. He’s focused on combating Covid-19 and pushing massive spending plans to revive the economy. Waiting in the wings are efforts to tackle climate change, protect voting rights, reform the immigration system, and strengthen firearms restrictions — all of which members of his party are demanding him to do.

“On the one hand, there are those who say it’s time for us to put the government in order and establish thorough ethics guidelines so this never happens again,” said Rep. Jamie Raskin, (D-Md.), a member of the Oversight Committee who led the second impeachment prosecution against Trump. “But then there’s another impulse, which is to say that the problem was one guy, and he’s gone. …There’s a kind of complacency that sets in.”

Biden likely has a limited time to act. By the end of his first year, members of Congress will be consumed by the midterm elections and then the next presidential race.

But a closing legislative window isn’t ethics experts’ only concern. In recent weeks, Biden’s commitment to ethical governance has been questioned after aides put in place a purchasing system that helped ensure buyers of Biden’s son’s artwork remain secret. There have also been concerns over the president’s decision to hire former lobbyists and those with corporate ties, including Secretary of State Antony Blinken and counselor Steve Ricchetti, and over his acceptance of unnamed donations to the Biden Institute at the University of Delaware.

In a letter sent to Biden last month, government watchdog groups wrote they were worried about potential conflicts of interest between senior officials who have financial ties with Uber and Lyft, the same rideshare companies providing free transportation to vaccine sites. As a result, the groups met with White House officials in June and learned the administration has a team of seven to eight employees in the counsel’s office that tackle ethics issues, according to a second White House official. “We have an entire team in the White House counsel’s office dedicated to doing ethics work,” the official said.

“Biden proposed this sweeping reform agenda, most of which can only be done through legislation, and thus far, has thrown absolutely zero weight behind legislative reforms,” said Walter Shaub, former director of the Office of Government Ethics who is now a fellow at the Project on Government Oversight. “So it’s all good and well that he wants his own appointees to behave ethically. But nothing he does will outlast his presidency if he doesn’t get any legislation through Congress. And that’s the big disappointment here.”

The criticisms about Biden are often dulled by caveats that he’s charted a much more ethical path in office than his predecessor. Trump broke countless norms involving financial transparency and conflicts of interest in the White House and across his administration. He was accused of using the presidency to make money for his vast real estate business, having federal employees break the law by campaigning for him, and employing staffers who spent staggering amounts on travel.

But for government watchdog groups, Trump’s lapses are not baselines upon which Biden should be judged. Rather, they are examples of the need for legislative solutions.

“What we learned during the Trump administration is the guardrails, the norms, they weren’t enough to fight corruption and to make sure the public was informed about what was going on in this country,” said Lisa Rosenberg, executive director of Open The Government, a nonpartisan coalition that works to hold the government accountable. “And so we really expect Biden to go above and beyond just getting back to normal. Normal is not good enough. And so far he hasn’t gone above and beyond.”

Norm Eisen, who served as Obama’s ethics czar and spearheaded a report on Biden and ethics earlier this year through the Brookings Institution, where he serves as a senior fellow, praised Biden for making his executive order even stronger than the one Obama signed.

Still, the Brookings report and other watchdog groups outline a number of recommendations for Biden, including strengthening the Office of Government Ethics; requiring a president to divest conflicting financial interests; and protecting inspectors general from retaliation.

“It’s not sustainable for presidents only to do [executive orders] and other forms of executive actions,” Eisen said. “They have to have the cooperation of Congress on executive branch ethics … There is no substitute for congressional action.”

During the campaign, Biden proposed a variety of reforms including a constitutional amendment to eliminate private dollars from federal elections, a commission on federal ethics to enforce ethics laws, changing the way national party conventions are funded and mandating more meaningful lobbying disclosures.

Most would have to be implemented through legislation but some could be done at the agency level. For example, the White House and Justice Department have yet to issue long-promised guidance limiting contacts between Biden White House staffers and DOJ officials. Those policies typically require the White House counsel’s office to sign off on interactions, generally limit them to high-level officials, and seek to avoid White House interference in DOJ enforcement decisions. By comparison, the Trump White House issued a memo about DOJ contacts in late January 2017, though the president was accused of ignoring the restrictions time and time again.

The Department of Justice declined to comment on any efforts it is making but did say a new iteration of the contacts memo will be out “very soon.” The first White House official clarified that White House counsel Dana Remus did issue an internal memo on Inauguration Day on how to communicate with agencies, including the Justice Department, and included language in Biden’s executive order.

Biden hasn’t advocated for any of the ethics legislation that has been introduced, including those that would protect whistleblowers and require lawmakers to put stocks in blind trusts. The White House officials said the president supports other efforts but that some bills have not been introduced yet. He did support the For the People Act — a sweeping elections bill that included significant campaign finance changes — but often talked about the legislation as a way to protect voting rights and rarely as a vehicle for improving government ethics.

In the official statement of administration policy dated June 22, the White House did mention ethics, saying “it would reform our campaign finance system with more transparency. It would establish stronger ethics rules for all three branches of government. These provisions would also serve to help restore confidence in our government, and in democratic institutions.”

Sen. Jeff Merkley (D-Ore.), who pressed Biden to enact strong federal ethics standards at the start of his term, said that even though Biden didn’t speak much about the ethics aspects of the legislation, White House staff recognize ethics is one of the bill’s major pillars, along with voting and redistricting. “I’ve talked with a lot of members of his team, who are very clear about the importance of all of these provisions,” he said.

The bill includes a variety of changes, including some Biden didn’t tout on the campaign trail. It requires presidential and vice presidential candidates to publicly disclose their previous 10 years of income tax returns; establishes ethics rules for the Supreme Court; sets new disclosure rules and limitations on presidential inaugural committees; and restructures the Federal Election Commission to reduce partisan gridlock.

But Senate Republicans blocked the bill and — like other ethics legislation — it doesn’t appear to be moving ahead. Democrats are pushing Biden to support lifting the 60-vote threshold that comes with the filibuster for select issues, including the For the People Act. But the White House has been resistant to such a reform.

“The 60-vote threshold in the Senate is still a steep climb for everything,” said Rep. Gerry Connolly (D-Va.), a member of the House Government Oversight Committee. “I do think there are pieces of legislation that still have good prospects before them. But overall, broad ethics reform in some kind of sweeping fashion is problematic.”