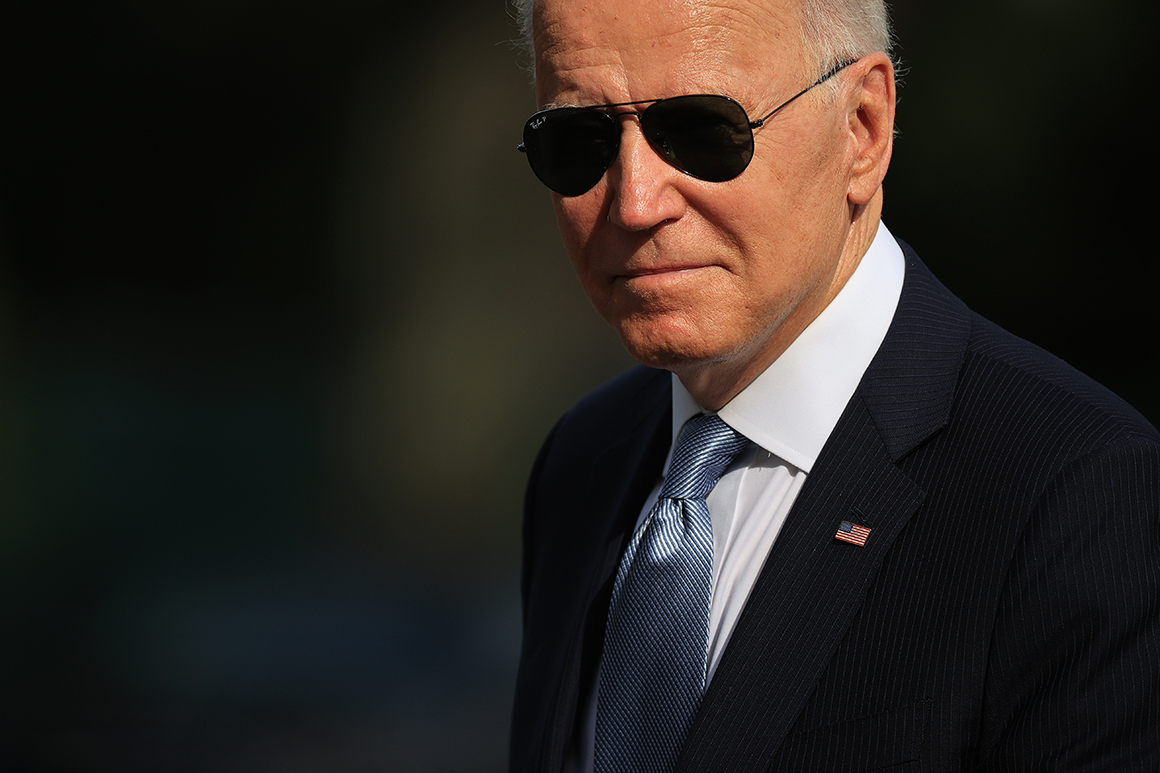 President Joe Biden’s effort to resurrect the Iran nuclear deal was already in a precarious position. Allegations this week that Tehran planned to kidnap a U.S. citizen are not helping.

As word spread of the suspected plot, detailed in a federal indictment, a U.S. official familiar with the issue said the Biden administration will keep pursuing the nuclear agreement’s revival, despite a seeming stall in the negotiations with Tehran.

Ending Iran’s nuclear program remains one of America’s “most important and urgent concerns,” the U.S. official said on Wednesday, the sixth anniversary of the day the nuclear deal was reached. “Every single challenge and threat we face from Iran is made more pronounced and dangerous by an unconstrained nuclear program.“

Senators emerging from a classified Iran briefing on Wednesday with Secretary of State Antony Blinken said they were skeptical about the prospects of nuclear diplomacy with Tehran.

“It’s obviously a work in progress. But it sounds like — and things can always change — it’s not happening any time soon,” Senate Foreign Relations Committee Chair Bob Menendez (D-N.J.) told POLITICO after hearing from Blinken. Menendez, one of the few Democrats who opposed the Obama-era nuclear deal, said the indictment unsealed on Tuesday about the alleged kidnapping plot raises questions about “the good faith of the Iranians.”

Senate Intelligence Committee Chair Mark Warner (D-Va.) said there are “not a lot of great options at this point” and “getting out has not made the situation better for us, for our allies, for the region, and our European friends” — a reference to former President Donald Trump’s 2018 decision to pull the U.S. out of the agreement.

Critics, meanwhile, seized the moment to demand that the administration abandon the talks.

Rep. Michael McCaul, the top Republican on the House Foreign Affairs Committee, warned that the U.S. would lose leverage over Iran because restoring the 2015 deal means lifting many U.S. economic sanctions. Without the sanctions, the United States cannot ensure that Iran will discuss other thorny subjects beyond the nuclear issue, McCaul said.

“This is a regime that holds American hostages and is actively trying to kidnap an American from the streets of New York,” McCaul said in a statement. “President Biden should not enter into any deals with Iran without an end to these assaults on our citizens.”

The indictment, unsealed in Manhattan on Tuesday, alleges that four Iranian nationals with intelligence links plotted to abduct a Brooklyn-based Iranian American journalist who has sharply criticized the regime in Tehran. The journalist, Masih Alinejad, has confirmed that she was the target. A fifth person was also indicted on related charges.

According to Assistant Director Alan E. Kohler Jr. of the FBI’s Counterintelligence Division, “the government of Iran directed a number of state actors to plot to kidnap a U.S.-based journalist and American citizen, and to conduct surveillance on U.S. soil — all with the intention to lure our citizen back to Iran as retaliation for their freedom of expression.”

The plotters tried to find different ways to bring Alinejad back to Iran, including by pressuring her relatives. They even looked into using “military-style speedboats“ to see if they could transport her from New York to Venezuela, a country with friendly relations with Tehran, as part of the plot, according to the Justice Department.

The Justice Department said the four intelligence operatives reside in Iran, while the fifth suspect resides in California. It is unlikely the United States will be able to detain the four in Iran given that the two countries lack diplomatic relations.

Alinejad is perhaps best known for campaigning against Iranian rules mandating that women wear headscarves. She did not immediately respond to a request for comment from POLITICO, though on Twitter and in other media she has expressed shock and disbelief over the ordeal, while also castigating Iran for its abuses of its people. She has in the past expressed doubts about Biden’s efforts to revive the nuclear deal, arguing that it should take into account Iran’s poor human rights record.

Talks on reviving the nuclear deal have stalled in recent weeks. Negotiators, which include those from the United States and Iran talking indirectly via European intermediaries, had been meeting in Vienna. But after wrapping up a sixth round of discussions in June, a seventh has yet to be scheduled. Adding to the uncertainty is the election of a new, hard-line Iranian president who is still putting his team together.

But for now, at least, the administration intends to keep pushing for additional talks, according to the U.S. official, who spoke on condition of anonymity due to the sensitivity of the issue.

The official stressed that the U.S. “categorically condemns” the alleged Iranian plot, but he also argued that the Justice Department’s pursuit of the criminal case shows that Washington can simultaneously tackle multiple objectives when it comes to the Islamic Republic.

“So yes, we intend to continue our effort to limit Iran’s nuclear program through a return to mutual compliance with the [deal] while also actively protecting American citizens and American interests on non-nuclear issues,” the U.S. official said.

After being briefed by Blinken on Wednesday, Sen. Marco Rubio (R-Fla.), the vice chair of the Senate Intelligence Committee, said that “anyone who’s being realistic about it knows it’s going to be difficult to get a good deal.”

The 2015 Iran nuclear deal lifted an array of U.S. and international economic sanctions on Iran in exchange for major restrictions on the country’s nuclear program. It came together during the presidency of Barack Obama, and the negotiations involved several countries, including Russia and China.

During his presidency, Trump abandoned the agreement, saying it was too narrow and time limited. He echoed longstanding opponents of the agreement in saying it should have dealt with other aspects of what the U.S. considers malign behavior by Iran, including its ballistic missile program and its sponsorship of terrorism.

In pulling out of the agreement, Trump reimposed the past U.S. sanctions on Iran, while adding new ones in a “maximum pressure“ program aimed at weakening the Islamist regime in Tehran. Iran’s economy has suffered as a result, but, in defiance of the U.S. pullout, the government has resumed several aspects of its nuclear program. (Iran has always insisted its nuclear program was meant for peaceful purposes, not weapons.)

Biden has sought to reenter the nuclear agreement, but he’s refused to lift sanctions so long as Iran is out of compliance with the deal. Biden also wants Iran to commit to additional, future talks on non-nuclear issues, as well as finding a way to extend and even expand the terms of the 2015 deal.

The U.S. official argued that since Trump abandoned the agreement in 2018 and heaped on sanctions, Iran’s behavior has not improved. Tehran is still sponsoring militias in the Middle East that have attacked U.S. troops, including by using drones. It has not eased its repressive policies toward its people. Iran even eyed a plot to assassinate the then-U.S. ambassador to South Africa, Lana Marks, as potential retaliation for Trump‘s decision to kill a top Iranian general.

The latest allegations involving Alinejad suggest that walking away from the agreement and putting “maximum pressure” on Iran didn’t do much to change Tehran’s calculus, the U.S. official said.

Critics of the nuclear deal say that, if revived, it will economically strengthen Iran, including by giving it access to tens of billions of dollars in frozen assets. Once the main terms of the deal expire in the coming years, Iran will be able to wreak damage in the Middle East and beyond from a stronger financial position, the critics allege.

“Let the latest indictment be a warning,” said Behnam Ben Taleblu, a senior fellow with the hawkish Foundation for Defense of Democracies, which has long opposed the deal. “Now is certainly no time to be talking about removing terror sanctions or any other sanctions frankly, from the world’s foremost state sponsor of terrorism.”