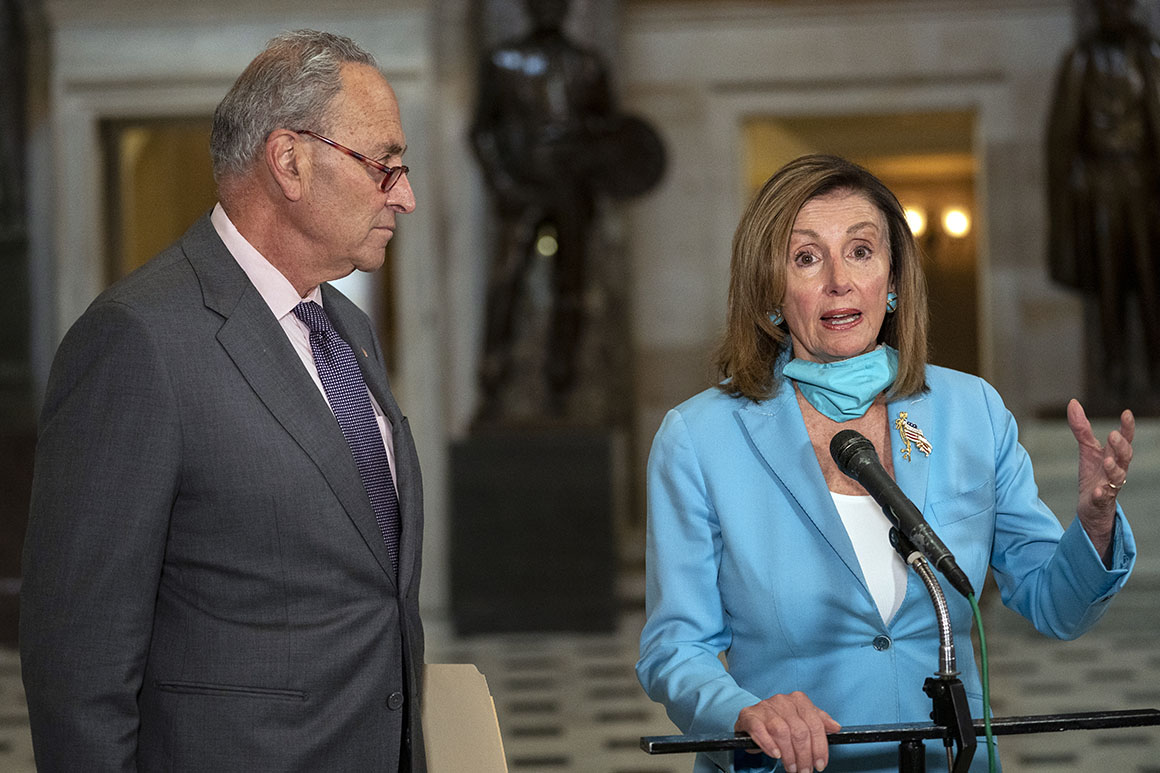 As the Senate’s bipartisan infrastructure talks drive closer to a ditch, the House is impatiently waiting for its turn at the wheel.

Fresh off a two-week recess, Speaker Nancy Pelosi and her leadership team have begun early discussions about how to achieve the near-perfect sequencing needed to steer two behemoth bills — a bipartisan infrastructure deal along with a $3.5 trillion social spending package — through the narrowly divided House. But with the Senate likely to go first on both, it’s unclear whether the upper chamber can get either plan ready for House consideration in the coming weeks.

That’s not sitting well with some Democrats.

“Obviously, we need to be more involved,” said Rep. Juan Vargas (D-Calif.), describing the frustration of many House Democrats who want to have a greater role in the talks. “They’ve got to be able to pass something over there, and bring it over here … That’s gonna be the tough part.”

Pelosi is telling her members to hold tight for now, reflecting a cautious degree of trust in Senate Majority Leader Chuck Schumer as well as her confidence that she can calm her anxious caucus. In a leadership meeting Monday night, she told lawmakers that they would let the Senate process play out, according to multiple Democrats familiar with the meeting.

“The timing is what his timing is,” Pelosi said in a brief interview Monday night, referring to Schumer. “As I say, bring the bill to the floor when you’re ready to go. So I respect his timing.”

The Senate is expected to hold a test vote Wednesday on President Joe Biden’s $1.2 trillion infrastructure deal with the GOP, which includes nearly $600 billion in new funding for roads, bridges and broadband.

The bipartisan Senate bill has yet to be finished, with both parties still battling over how to pay for it. Senate GOP leaders are already predicting the Wednesday procedural vote has “no chance” of succeeding unless negotiators shape legislative text first.

But Schumer’s hardball move — forcing an initial vote even with the bill still in the drafting stage — has animated House Democrats’ disparate factions, with all corners of the caucus plotting post-Senate vote strategy. The New York Democrat said on the Senate floor Monday night that he was proceeding as planned, and that if the Senate negotiators can’t finish in time, he might tee up some of their committees’ already-drafted transportation bills.

Pelosi, meanwhile, has to cool down antsy members who feel they’re being forced to watch the talks from the sidelines with little direct say in a multi-trillion dollar package they could be voting on just a few weeks after Senate action.

“We’re not a cheap date,” quipped House Rules Committee Chair Jim McGovern (D-Mass.) when asked about the House role in the talks. “I think we’re all in sync … The House is going to do what we have to do.”

Those cross-Capitol tensions boiled over on Monday with House Transportation Committee Chair Peter DeFazio (D-Ore.) ripping into the Senate talks during a private call. DeFazio, who is enraged that the bipartisan negotiators seem to be largely ignoring the infrastructure bill he shepherded through the House earlier this year, even said he hoped the Senate talks fell apart.

He wasn’t alone. Rep. Salud Carbajal (D-Calif.), who also spoke up on that call, later described the “discombobulated” process between the House and Senate that has irked him and some of his colleagues.

“It’s frustrating because I think we’re all rowing towards the same goal, but it’s fluid,” Carbajal said. “Sometimes it’s counterproductive and we take two, three steps forward and a few back.”

If the Senate test vote succeeds Wednesday, House moderates are privately planning an aggressive public relations push to convince Pelosi and her leadership team to immediately allow a vote on their side of the Capitol once the infrastructure bill clears the Senate.

Ten of those House centrists have already publicly called for their leadership to decouple the bipartisan deal from the party-lines budget blueprint, urging top Democrats to hold a vote before the August recess and “without any unnecessary or artificial delay upon arrival from the Senate.”

Progressives are taking an opposite tack, intent on holding Pelosi to her previous commitment that the Senate’s bipartisan deal won’t get a vote until that chamber has also advanced the Democrats’ sweeping social spending plan. Liberals fear that Senate moderates like Sen. Joe Manchin (D-W.Va.) would balk at any additional spending as soon as the smaller bill they negotiated is signed into law, dooming the Democrats’ plans for a massive $3.5 trillion safety net investment.

“I’m hoping that she keeps her vow. I think she will. She’s been steadfast from the very beginning,” said Rep. Jamaal Bowman (D-N.Y.) of the speaker. “If she said it, she means it.”

But all the jockeying could prove for naught, with the prospects for any bipartisan infrastructure bill appearing rocky as of Monday night. Democrats would need 10 Republicans to join them to move the measure forward — something GOP leaders said won’t happen until it’s fully written.

If the bipartisan deal does collapse, it would rip apart Democrats’ carefully choreographed legislative plan, raising huge new questions about what the party would put on the floor in the fall. Several senior Democrats said Monday that they still seriously believed the negotiators could reach a deal, though they said it remained unclear how the two sides could agree to billions of dollars in funding mechanisms.

“We can do a lot over here, but it doesn’t really matter what we do if [the Senate] can’t push something through,” said Rep. Dan Kildee (D-Mich.). “The next two weeks are pretty critical.”

For weeks, much of the debate on Biden’s spending plans has played out in the Senate, where Democrats must achieve perfect unity on any budget bills given the chamber’s 50-50 split. But Democratic leaders will also face an enormous hurdle in the House, where Pelosi’s tight margins will only shrink after a special election in Texas later this month.

After that Texas run-off, House Democrats will only be able to lose three votes on any legislation. That promises to complicate the path for Biden’s massive domestic spending plan, not to mention the rest of Congress’s to-do list.

“There’s always that tension between the House and the Senate,” said Rep. John Larson (D-Conn.). “And with margins being as thin as they are, it’s amplified even more because every vote becomes critical.”