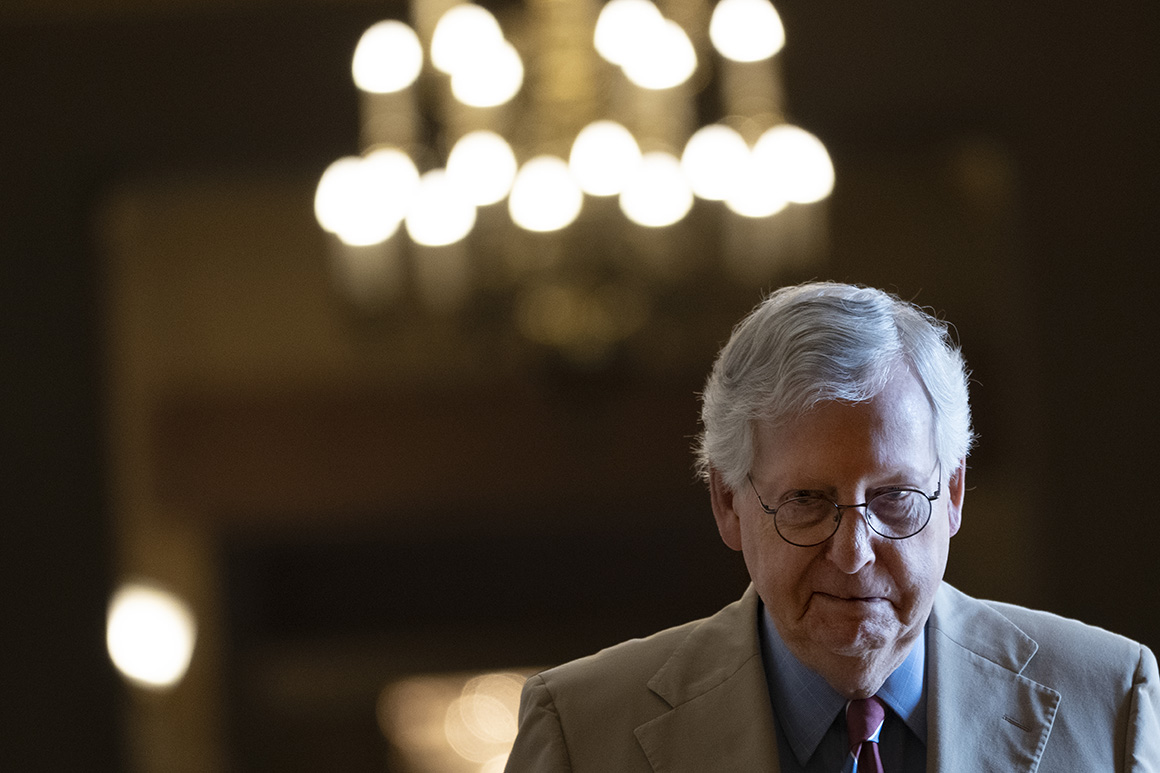 Something strange is happening in Washington: Mitch McConnell might go along with a central piece of Joe Biden’s agenda.

The self-appointed “Grim Reaper” of the Senate, a minority leader who said just two months ago that “100% of my focus is on standing up to this administration,” has been remarkably circumspect about the Senate’s bipartisan infrastructure deal. He’s privately telling his members to separate that effort from Democrats’ party-line $3.5 trillion spending plan and publicly observed there’s a “decent” chance for its success.

Other than questioning its financing, McConnell has aired little criticism of the bipartisan agreement to fund roads, bridges and other physical infrastructure, even as he panned Democrats’ separate spending plans on Wednesday as “wildly out of proportion” given the nation’s inflation rate.

His cautious approach to a top Biden priority reflects the divide among Senate Republicans over whether to collaborate with Democrats on part of the president’s spending plans while fighting tooth and nail on the rest. Many Democrats predict McConnell will kill the agreement after stringing talks out for weeks, but the current infrastructure talks are particularly sensitive for the GOP leader because one of his close allies, Ohio Sen. Rob Portman, is the senior Republican negotiator.

McConnell is aware of the conventional wisdom that he will ultimately knife the deal and is taking pains not to become the face of its opposition.

“He usually is the brunt of the demonization of the other side,” said Sen. John Cornyn (R-Texas), another McConnell confidant. “I don’t think he is Dr. No when it comes to all legislation.”

For the moment at least, McConnell’s approach marks a shift from his past strategy of blocking Democratic priorities to portray the governing party as chaotic and inefficient. Advisers say he understands the bipartisan appeal of infrastructure and views it as less ideological than other Democratic priorities.

The Kentucky Republican is also perceptive of moments when his power is limited, evidenced by his 2013 decision to oppose — but not try to defeat — his members’ immigration compromise with Democrats. He’s also sent emissaries out in the past to engage with Democrats on health care and the deficit, efforts that eventually failed.

“His problem is that many of his members like what’s in it,” Murphy said. “McConnell is going to have a hard time keeping his caucus together if he decides to oppose it.”

Sen. Jon Tester (D-Mont.), who helped negotiate the bipartisan framework, was skeptical that McConnell would sink it, given that Democrats could simply then fold the failed cross-aisle deal into their larger partisan package.

“I don’t think it would be smart for him to do that, so I don’t think he will,” Tester said. “It’s better for them to pass the bipartisan bill and let the Democrats fight it out on the $3.5 trillion bill.”

McConnell could take a similar tactic this summer to his 2013 play on immigration, opposing the deal without whipping against it. But there’s a flip side to the squeeze he’s feeling, and it’s coming from the right. Conservatives are increasingly leaning on the Senate GOP to rip up the bipartisan deal and kill its attempt to pour $40 billion into increased IRS enforcement. Former President Donald Trump has trashed the deal, as well.

And many Republican senators worry they are stepping into a trap by agreeing to an infrastructure deal that will help Biden pass a larger spending bill, one designed to increase taxes on the wealthy while expanding social programs and policies to fight climate change. At a closed-door Tuesday lunch, Sen. Ron Johnson (R-Wis.) bluntly asked his party what working with Democrats will get the GOP in the end, attendees said.

Asked afterward if that argument appeals to him, Johnson responded: “No.”

“All I see is a greater chance for much larger deficits,” Johnson said. “I’m not on board with this strategy of: Let’s do this and complicate their ability to pass reconciliation. I don’t agree with that.”

Republican proponents of the bipartisan infrastructure plan, however, argue that the GOP has nothing to lose by supporting it. Doing so, they say, lets the 50-vote minority put its stamp on a physical infrastructure proposal that doesn’t include tax hikes and later put vulnerable Democrats on the spot for supporting the $3.5 trillion tax-and-spend package.

Even if he ultimately sides against the deal, McConnell is cognizant that being too heavy-handed in bringing it down carries risks. Much more likely, allies say, is that a handful of Republican senators who initially endorsed the accord end up balking at Democrats’ big spending plans and the bipartisan deal’s rocky revenue sources.

McConnell’s top deputy on Wednesday winced at Democrats’ plans to marry the nearly $600 billion in new spending on roads and bridges with a $3.5 trillion, GOP-free package of spending to fight climate change and expand Medicare.

Democrats view Thune’s comment as a harbinger of McConnell’s eventual opposition. Sen. Jeff Merkley (D-Ore.), a frequent McConnell antagonist, said “the fact that he’s quiet now means he’s not sure of the lay of the land.”

“When all you have is a hammer, everything looks like a nail. And all he does is oppose, and I don’t anticipate this will be any different,” said Sen. Brian Schatz (D-Hawaii).

Republican negotiators say that thus far they have not sensed resistance from McConnell. Some proponents of the deal took it as a positive signal that he advised them to evaluate the bipartisan plan separately from the Democrats’ social spending plan.

Sen. Susan Collins (R-Maine) described the GOP leader, so often opposed to all of Democrats’ big ideas, as “very open-minded.”

“He has encouraged us to proceed,” she said. “He has not committed one way or the other, which is understandable, because we don’t have a final product.”

On Thursday, the bipartisan group is hoping to finalize the framework it laid out at the end of June. It’s unlikely McConnell will weigh in, however, until they release legislative text and the Congressional Budget Office rules on whether the proposed financing mechanisms actually pay for the legislation.