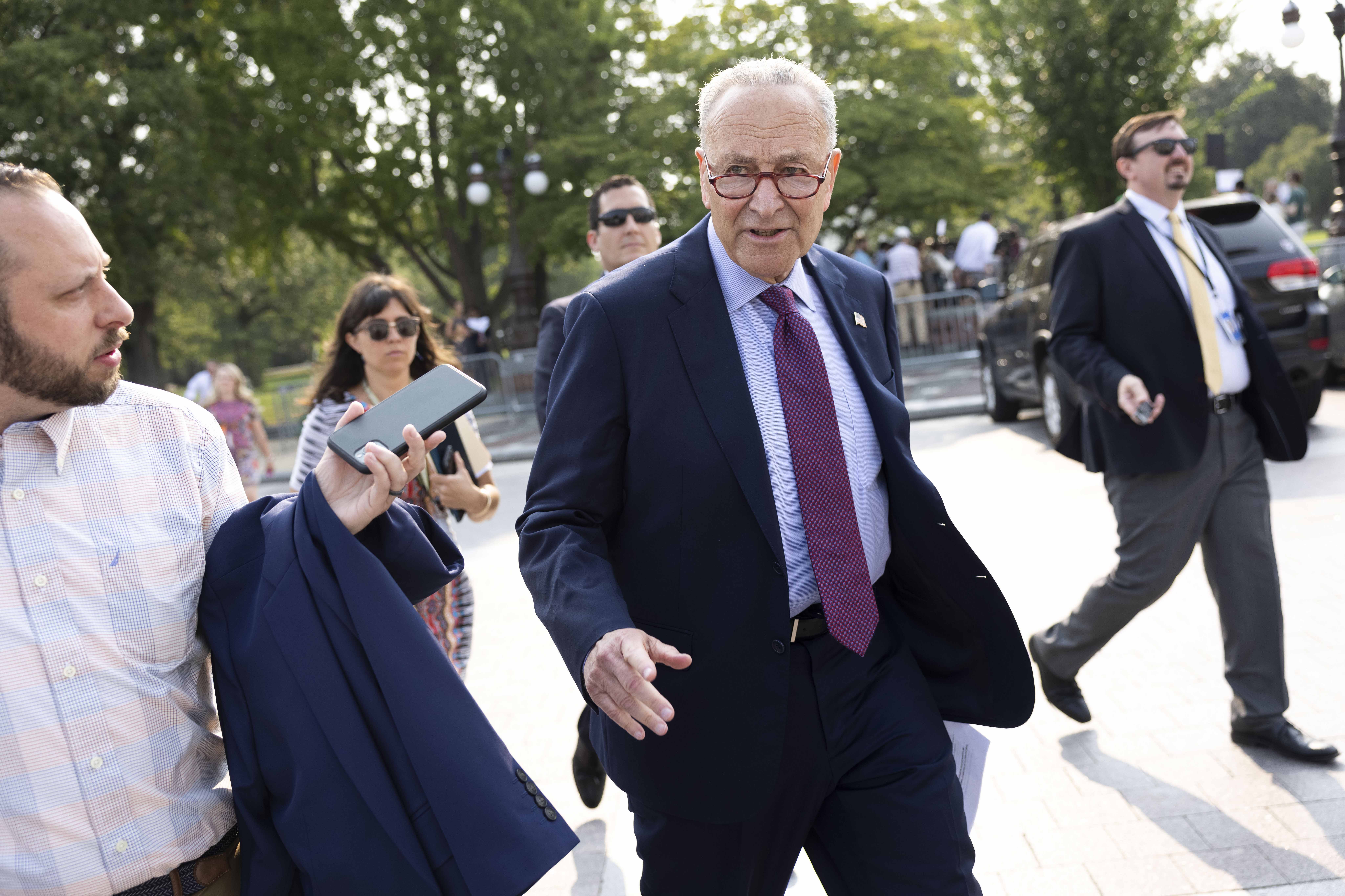 The Senate’s bipartisan infrastructure negotiators are hustling to finish their bill as Republicans push for Senate Majority Leader Chuck Schumer to move a Wednesday test vote that’s likely to fail.

The bipartisan group is meeting Tuesday afternoon, after a two-hour Zoom session Monday night with the White House. Though participants reported progress on that call, some in the group say the talks are likely to drag into next week given the size and scale of both the potential bill — with nearly $600 billion new spending — as well as disagreements over how to pay for it.

Schumer has set up a Wednesday vote to advance the bill, but GOP leaders signaled Tuesday that Republicans wouldn’t support even beginning debate on legislation that remains unwritten. Schumer insisted it is “not a fish or cut bait moment,” but added that the Senate needed to start the process this week in order to finish the legislation before the August recess.

Schumer also offered the bipartisan group more time to negotiate, if Senate Republicans agree to move forward Wednesday. If the cross-aisle legislation is not finished by Thursday, Schumer said the Senate could consider elements of the underlying infrastructure framework that have already passed key committees.

But that did not appease Republicans, many of whom want to see cost estimates from Congress’ nonpartisan budget scorekeeper before voting to start debate. Republican Whip John Thune of South Dakota said he expected 50 Republican no votes, including the bipartisan negotiators.

And Sen. Rob Portman (R-Ohio), the lead GOP negotiator, said Tuesday that the group was still waiting for the legislation to be scored by the Congressional Budget Office and the Joint Tax Committee.

Sen. Joe Manchin (D-W.Va.) insisted that a failed vote on Wednesday should not mean the end of the road for the group of senators. “We’ve resurrected everything but Lazarus around here so we can resurrect this one,” Manchin said after a party lunch on Tuesday.

Sen. Susan Collins (R-Maine), one of the GOP negotiators, is pushing for the vote to be delayed until Monday and added that a failed vote on Wednesday “certainly is not helpful.” Sen. Bill Cassidy (R-La.) said the bipartisan group needed to discuss Schumer’s remarks on Tuesday before he could say how he will vote on Wednesday.

Republican negotiators are considering sending a letter to Schumer asking him to delay the vote to next week. But given that Schumer has already started the floor proceedings, the most straightforward path to moving the vote would require buy-in from all 100 senators. And Democrats are supportive of Schumer’s move.

On Monday Sen. Jon Tester (D-Mont.) told members of the bipartisan group: “We rolled this thing out a month ago and we’re still talking about it? C’mon guys. Everybody on that call has been around long enough to know nothing happens unless pressure is put on.”

Schumer’s push to move forward on the bipartisan infrastructure framework comes as Senate Democrats also prepare a $3.5 trillion social spending plan that they expect to wrestle through without GOP buy-in. Schumer has also set a Wednesday deadline for Senate Democrats to reach an agreement detailing how committees will construct that bill.

It’s not clear if the failure of the bipartisan deal would force an increase in the separate bill’s $3.5 trillion price tag.

Schumer has long insisted that President Joe Biden’s physical infrastructure and social spending plans are proceeding on two separate tracks. Biden and a bipartisan group of 10 senators announced agreement on an infrastructure framework in June, but translating that into legislative text has proven a heavy lift.

Sen. John Cornyn of Texas, a Republican close to Senate Minority Leader Mitch McConnell said the vote will still fail on Wednesday despite Schumer’s entreaties: “How would he expect us to vote on a bill that doesn’t even exist yet.”

McConnell told reporters Tuesday that Schumer would “not be slowed down” by the failed vote.

“All that does is give him the opportunity to move to reconsider and if at some other point the bipartisan deal comes together, we can reconsider the vote,” the GOP Leader said. “No time is lost by the very simple principle that we’re not going to the bill until we know what the bill is.”

“The public should know they’re rejecting a bipartisan infrastructure approach,” Pelosi told her members, according to people familiar with the remarks.

Pelosi also suggested that the House could tweak whatever bipartisan bill is passed by the Senate, a potential response to the growing unrest among some senior Democrats in her caucus. “When we get the Senate bill, we may want to tweak this,” the speaker said.

And while Schumer insisted that the vote was not a make-or-break moment for the Senate’s bipartisan talks, some progressives don’t see it that way.

“They’re trying to get everybody to coalesce but if that doesn’t happen, we’re going to have to move forward,” Rep. Pramila Jayapal (D-Wash.), who leads the Congressional Progressive Caucus, told reporters.