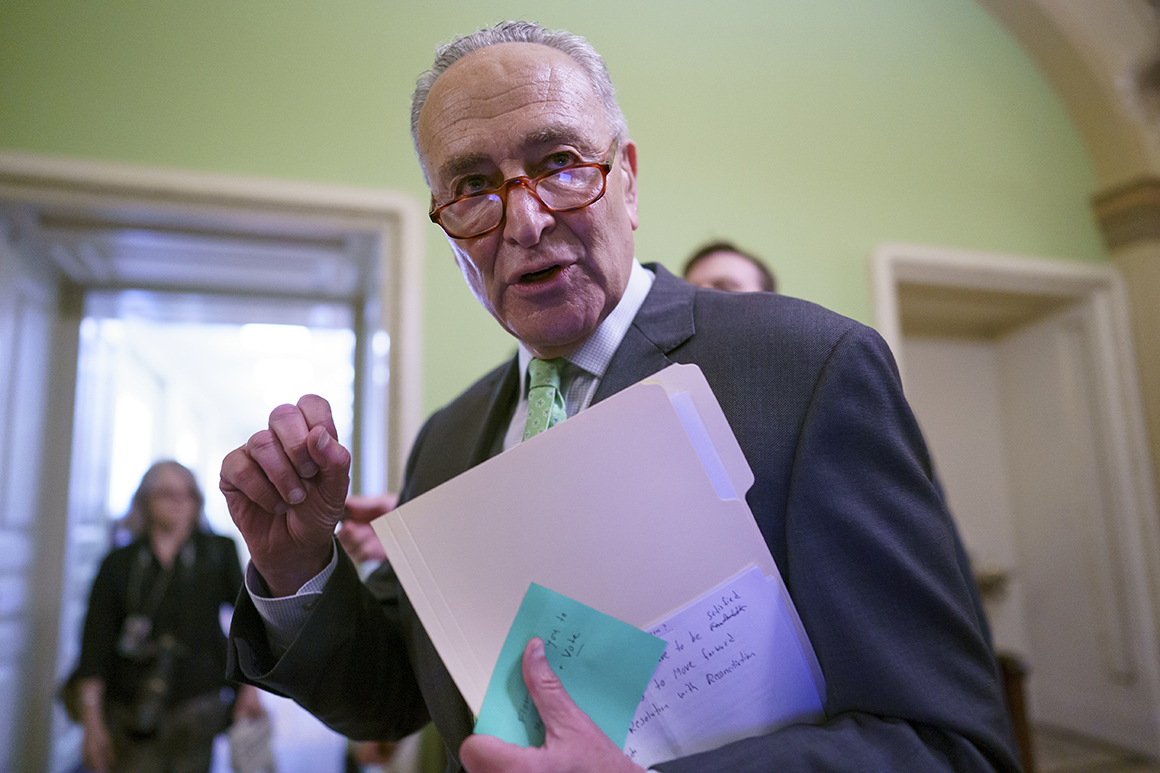 “Everyone has been having productive conversations and it’s important to keep the two-track process moving,” Schumer said in a floor speech Thursday. “All parties involved in the bipartisan infrastructure bill talks must now finalize their agreement so that the Senate can begin considering that legislation next week.”

The New York Democrat added that he is setting the same deadline for the Democratic caucus to reach a consensus on a budget resolution setting up a $3.5 trillion social spending plan.

The fate of Wednesday’s vote, however, remains uncertain. Although Democrats expressed optimism about the timetable, Republicans were less sure. At the moment, it’s not clear whether 10 Republicans will vote to advance the bipartisan bill.

When asked whether he was confident the bipartisan group would meet Schumer’s deadline, Sen. Mike Rounds (R-S.D.), a member of the group negotiating the bipartisan framework, had a blunt response: “No.”

“We’re not done yet,” Rounds said. “I don’t think we’re going to have any artificial deadlines. I think we’re going to do our best to get done in an expeditious fashion, but if we were successful in coming to an agreement, it’d be great to have it done before” August recess.

Schumer’s timetable comes as the Senate’s bipartisan infrastructure negotiators are unlikely to meet their own self-imposed Thursday deadline to resolve outstanding issues among members, according to two sources familiar with the talks. The group met again early Thursday afternoon, but members still need to resolve key disagreements over how to pay for the $1.2 trillion physical infrastructure deal that Biden supports. The bipartisan group met Tuesday evening and made progress, but a host of questions about spending priorities also remain unanswered.

Among the proposed funding sources that could change is a provision related to IRS enforcement, a source of controversy for Republicans. One Senate Democrat suggested that money from increased IRS enforcement could instead be used to pay for for Democrats’ $3.5 trillion package.

Members of the group are racing to turn the bipartisan framework they announced last month into legislative text, and Schumer’s deadline will only add pressure to wrap up the discussions. Several Senate Republicans interpreted it as an effort to sink the bipartisan talks, given the absence of legislative text and the likelihood that members will not yet have a score from the Congressional Budget Office by Wednesday.

“Why in the world would you vote for something that hasn’t been written yet,” asked Sen. John Cornyn (R-Texas), a McConnell confidante. “I don’t know whether Sen. Schumer is just setting this all up to fail so he can then move to the budget. That may part of his Machiavellian scheme.”

Sen. Shelley Moore Capito (R-W.Va.), who attempted to negotiate a bipartisan infrastructure package but failed, interpreted Schumer’s move as an attempt “to put pressure on the group to either put up or shut up.”

Schumer will take the first steps toward moving the bipartisan physical infrastructure proposal Monday, using a House bill as a legislative vehicle that would later be amended to reflect the Senate’s bipartisan infrastructure deal. Even if a deal is clinched and the Senate votes to move ahead on the bill next week, it will likely take days or even weeks to finish its work on the bipartisan legislation because of intense desire to vote on amendments to a bill likely to win Biden’s signature.

Speaker Nancy Pelosi, meanwhile, has vowed that the House will not move forward on the bipartisan infrastructure package until the Senate passes a budget setting up the $3.5 trillion social spending package. Senior Democrats do not expect that calculation to change based on the Senate’s latest moves.

And with Democrats just starting to hash out the details of that party-line spending package, it could be weeks, if not months, before the House takes up the bipartisan bill.

Both the physical infrastructure and social spending bills are top priorities for Biden, who attended a Senate Democratic caucus lunch Wednesday.

Senate Minority Leader Mitch McConnell has withheld judgment so far on the bipartisan plan, encouraging his members to view it as a separate effort from Democrats’ $3.5 trillion bill. Several Republicans have expressed concerns about its financing and are waiting for an official score from the Congressional Budget Office once the bill’s text is completed.