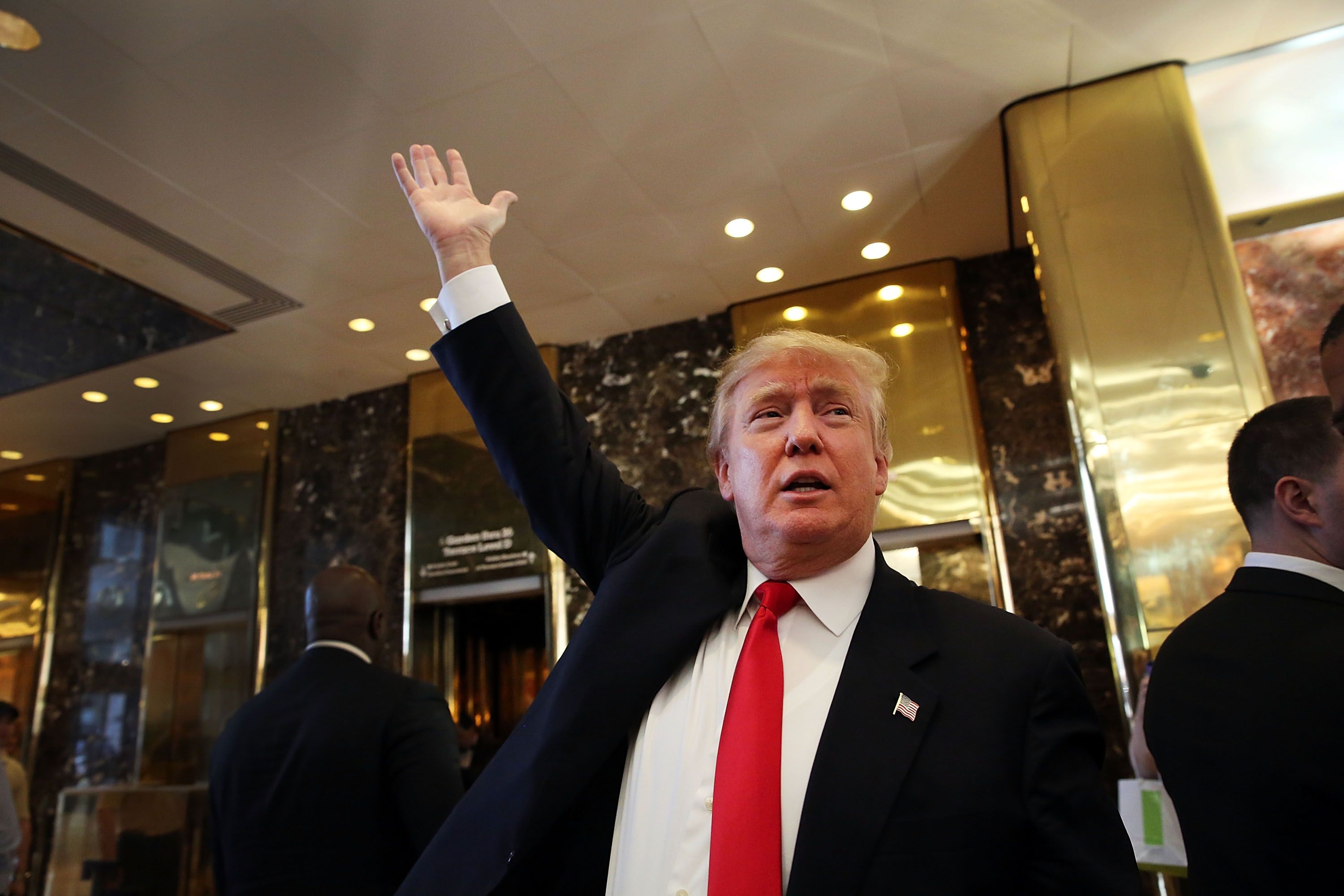 Informed earlier this week that he would not be personally charged on Thursday by prosecutors in New York, Donald Trump reportedly was thrilled. And when indictments were unsealed in an afternoon session in court in Manhattan, they indeed did not name him. The former president’s attorney invoked the title of a Shakespeare play—“Much Ado About Nothing.”

But Thursday’s arraignment of the Trump Organization and chief financial officer Allen Weisselberg for fraud, grand larceny and tax crimes in an alleged 15-year-long scheme was not nothing.

The development isn’t simply an escalation in the three-year probe by investigators into the business practices of Trump’s company. It’s also not only an especially fraught next chapter in Trump’s decades-long catch-me-if-you-can relationship with legal peril. And it’s not even just that it poses potential new threats of financial and political fallout.

It is most elementally a direct and personal hit.

For just shy of half a century the Trump Organization has been eponymous to the point of synonymous. The man is the brand is the business. The business is the brand is the man. Anyone who’s ever worked with him knows this. Anyone who’s ever even watched him or thought about him in a rigorous way knows this. The Trump Organization, always, right from the get-go, was nothing if not an extension and reflection of Trump himself.

“Nothing,” Cohen added, echoing what he said in his congressional testimony in 2019, “gets done there without his knowledge and consent. Period. End of story.”

The person, though, who has said the most about this indivisibility is … Trump himself. “I am the chairman and president of the Trump Organization,” he wrote in the first sentence of the first section of his 2004 book Trump: How to Get Rich. “Remember that your organization is your organization,” he stressed. “At the Trump Organization,” he reiterated in his (other) 2004 book Trump: Think Like a Billionaire, “I listen to people, but my vision is my vision.” It’s hard not to hear echoes of the French monarch Louis XIV. L’etat, c’est moi. I am the state.

It’s always been this way.

In the mid-1970s as he attempted to spin his father’s success into something he could claim as his own, Trump came up with the name. Fred Trump had made himself chairman of the board of the family business and his chosen heir its whippersnapper of a president. “One of his first acts,” biographer Gwenda Blair wrote of the younger Trump, “was to bypass all the pedestrian corporate names used by his father and instead adopt one classy-sounding label, the Trump Organization, as a sort of umbrella identity.”

In the beginning, when he started to piece together the deal that let him renovate a midtown hotel that led to Trump Tower that led eventually to … everything else, it was just him. The Trump Organization was a single person: Trump. “Somehow the word ‘organization’ made it sound much bigger,” Trump wrote in Trump: The Art of the Deal. “I acted,” Trump said in his 2007 book Trump: Think Big, “as if I had an organization.”

Later, when he actually did have one, when he bought a casino in Atlantic City and then another and then another, when his role on “The Apprentice” as the omnipotent boss of a company with his name on it in a building with his name on it proved to be a runway to the White House, what never changed within his organization was his own primacy and centrality. The brand was big—the core of the company was not. Trump, as Blair once explained, “has always preferred what anthropologists call ‘a circular hierarchy’—or, in plain English, a wheel. A work-flow diagram at the Trump Organization would have put Donald Trump at the hub and connected him by spokes to his small number of top staff. They numbered about a dozen …”

And nobody questioned who was ultimately in charge. Trump did what he wanted, even when it was imprudent—ill-considered moves ranging from his debt-larded spending sprees of the 1980s to his bankruptcies of the ‘90s to the scammy “sham” of Trump University decades after that.

The more discerning “Apprentice” contestants couldn’t help but notice the Trump Organization was something of a Potemkin enterprise—but one nonetheless assembled and operated in Trump’s image. Pamela Day, an investment banker with a Harvard Business degree who was on the second season of the show, recalled in an interview with the biographer O’Brien a telling back-and-forth in a meeting with chief operating officer Matt Calamari.

“He said: ‘I used to be a security guard and now I’m the COO,” Day said. “I thought, ‘What does a real estate company do with a COO?’

“Who works here?” she said.

The Trump Organization, O’Brien told me this week, is “not really ‘organized’ at all. It’s a hodgepodge of his own passions and interests, untethered from sophisticated strategic thinking.” Emphasis on his—“a reflection and extension,” O’Brien added, “of himself.”

Any notion that his ascension to the Oval Office would alter that bedrock reality and that Trump would adhere to convention and disentangle from his business interests in any hard-and-fast manner evaporated a little more than a week before his inauguration in a press conference in Trump Tower. “I could actually,” Trump said, “run my business and run government at the same time.”

“He’s incapable of seeing himself as anything other than the CEO of his company,” Wayne Barrett, the late Trump biographer, told me at the time. “It’s his identification—it’s his self-identification.”

His oldest sons, Don Jr. and Eric, were supposed to handle day-to-day operations while Trump focused on his day job. But that arrangement never made sense to people who had watched Trump up close.

“I do not believe for one minute that Trump ever left anyone to make decisions about his company,” Barbara Res, a former Trump Organization executive, told me this week.

“You cannot separate the two,” former Trump publicist Alan Marcus said. “Everything is interrelated with Donald.”

“The Trump Organization,” Trump said in his unwittingly revealing 1990 book Trump: Surviving at the Top, “is in some ways like the Disney Company. Images mean a great deal to me. If people don’t associate my name with quality and success, I’ve got serious problems.”

“The strategy is up to you, and so are the results,” he said in How to Get Rich. “Remember Harry Truman’s famous words, which he kept on his desk in the Oval Office? THE BUCK STOPS HERE.”

“As the Trump Organization has moved forward, I have very much seen it as a living organism that needs to be fed and replenished. It needs to be whole, which requires many sections fitting together and working together tightly. It is a daily requirement on my part to make sure all the ingredients are there and working together to make the best product possible. I can’t have any missing pieces. I can’t have any ingredients that aren’t the best. Those are my standards, and it’s my responsibility to make sure they are kept,” he wrote in his 2009 book Trump: Think Like a Champion.

“See yourself,” he counseled, “as an organization.”

Trump, meanwhile, in a statement called it a “political Witch Hunt by the Radical Left Democrats” who are, he said, “dividing our Country like never before!”

“This is the beginning of the end,” Louise Sunshine told me when I called her to talk about the indictments. And Sunshine’s worth listening to. She, after all, was there at the beginning of the beginning. She started working for Trump in 1973. She was an executive vice president for the Trump Organization until 1985. “He’s spent his whole life franchising his name,” she said, “and now his name is going to be worthless.”

“And the end of the Trump name.”