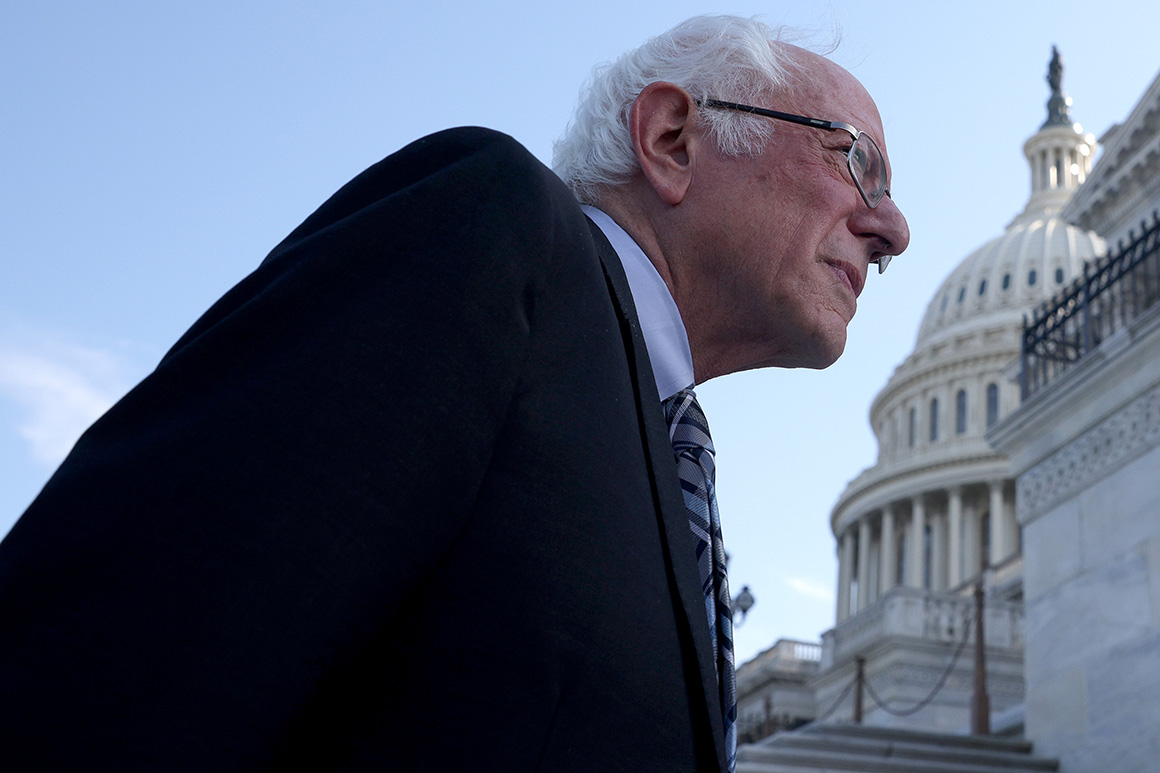 Bernie Sanders gave Washington whiplash this week — and it was all part of his plan.

Barely 24 hours after the Vermont senator publicly rejected a $3.5 trillion spending deal following a Monday meeting with President Joe Biden, he turned around to tout it as the most transformational policy proposal in nearly 100 years.

The shift in tone was a tactic Sanders used to coax moderate Democrats into going far higher than they might have otherwise felt comfortable. After he had insisted on shooting for the moon with a $6 trillion budget proposal, $3.5 trillion suddenly looked pretty reasonable.

The episode revealed a conciliatory side to the liberal icon often depicted by the media and Republicans as wild-eyed and well to the left of his party. Sanders has opposed some of Biden and Senate Majority Leader Chuck Schumer’s policies and nominees, but never in instances when his vote would prove decisive. He’s also softened his opposition to a bipartisan infrastructure deal, recognizing that he can’t alienate his fellow Democrats if he wants to move his own agenda.

Still, the Independent from Vermont isn’t quite ready for the “P” label.

“It’s not that I’m more pragmatic. It’s that there are 50 members of the Democratic Caucus. And unfortunately not all of them agree with me on everything,” Sanders said in an interview.

“It was important to have a vision going forward of where we needed to go. And I think that was the right vision,” Sanders added. “Obviously, it was a vision that was a little bit more comprehensive than some of my colleagues.”

Even after two presidential runs garnered him national stardom and effective ownership of the American left, Sanders has toiled in the Senate minority with few levers to pull. This Congress, as the Senate Budget chair and a member of Schumer’s leadership team, the 79-year-old is one of the most powerful people in Democratic-controlled Washington.

He also seems to be having a good time after decades of prowling the Capitol with gruff rebuttals for reporters delivered in his signature Brooklyn accent. After his interview with POLITICO, he was pressed by another reporter to take “one more question.”

“She makes me speculate,” he teased the second reporter, his voice rising in playful incredulousness. “One more question?!”

Jokes aside, moderates surmised it wasn’t easy for Sanders to shed his uncompromising stance on this year’s massive spending blueprint, which is still perhaps months away from becoming law. Tester, who quickly endorsed Sanders’ budget blueprint, despite reservations, observed that Sanders likely “had hesitation” in coming down by $2.5 trillion.

“It may have been one of those deals where it was: ‘Look, Bernie, if we don’t get this, we can’t do anything.’ And he decided to move with it,” Tester said of the haggling.

Yet senators on the Budget Committee viewed Sanders as taking an extreme position precisely so that it would yield a compromise all the more fruitful for liberal Democrats. If Sanders had started off endorsing Biden’s number of $4 trillion, it’s possible he and other progressives might have had to settle for a number lower than the $3.5 trillion they agreed upon.

“Bernie Sanders is like a human embodiment of shifting the Overton Window,” said Sen. Tim Kaine (D-Va.), who serves on the Budget Committee. “We wouldn’t be there without him putting out $6 trillion.”

With a ceiling of $3.5 trillion, Sanders says he can pursue all the changes that he’s prioritized, just not for not as long as he wants. That raises the possibility of future fights over the extension of programs like the expanded child tax credits championed by Democrats.

Nonetheless, Sanders argues every chance he gets that he’s pushing “the most consequential piece of legislation passed since the 1930s for working people.” On the price tag alone, he’s right: If successful, the current social spending bill will be the biggest ever passed by Congress. 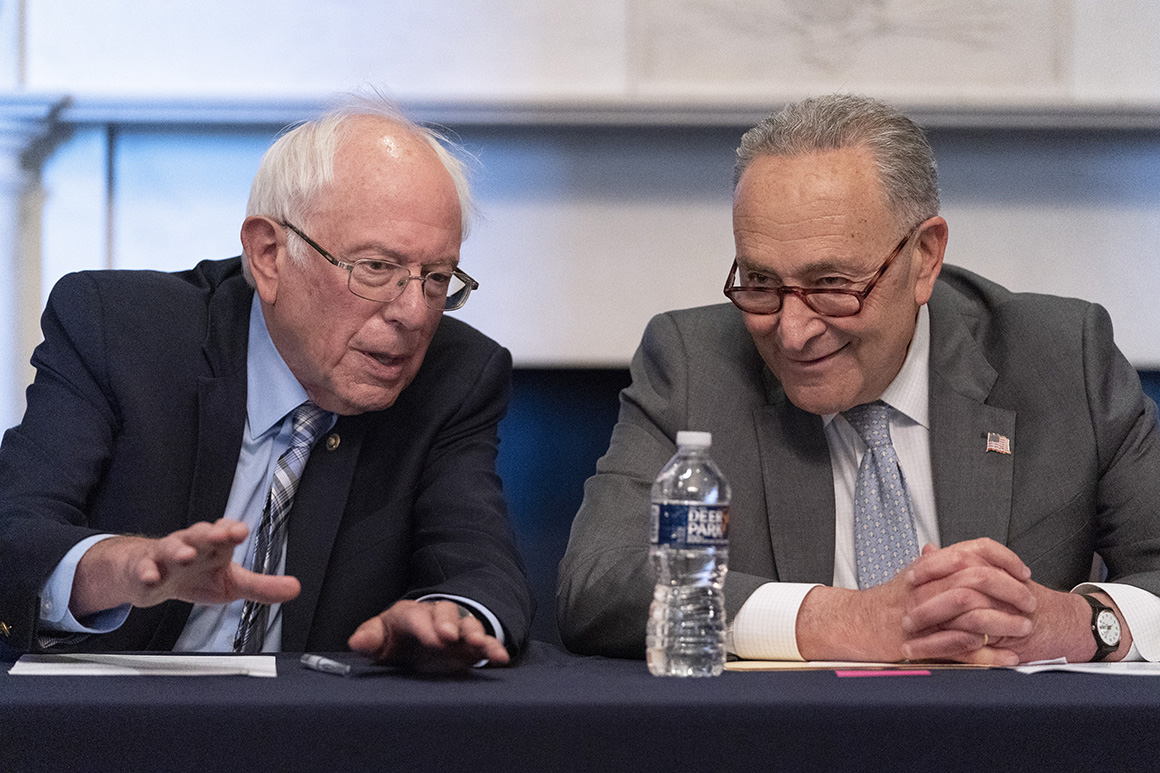 Those ambitious aspirations, and his influence on the Democrat Party’s agenda, make Sanders a handy villain for Republicans. The GOP tried to use his possible ascension in the majority as an attack line in the Georgia Senate races — only to see Democrats win those contests, giving Sanders the budget gavel.

Senate Republicans still try to tie vulnerable Democrats to Sanders, more so even than Biden or Schumer.

In addition to his central role in the Democratic caucus, Sanders also has the ear of former presidential rival Biden. Since winning the nomination and throughout the first six months of his presidency, the president has kept Sanders close.

White House chief of staff Ron Klain essentially had an open-door policy with Sanders as he pushed for a $15 minimum wage earlier this year. That hike was ultimately crushed by moderates and the Senate parliamentarian, an early blow for Sanders.

Medicare expansion is included in Senate Democrats’ budget proposal, though it’s unclear whether Sanders will be able to lower the Medicare eligibility age as he set out to do months ago. Nonetheless, Sanders seems close to cinching a major change to an entitlement program that’s helped define the party’s legacy for generations.

For many years, Sanders played “a kind of gadfly role,” said David Axelrod, who served as an adviser to former President Barack Obama, who Sanders briefly entertained primarying during the 2012 presidential campaign. But now, he added, Sanders “has comfortably shifted into the role of deal-maker.”

“You’re seeing a very pragmatic Bernie Sanders, but he’s pragmatic in a principled way,” Axelrod said, observing that Biden and Sanders, “who really were from different places in the party, have come together in the sunset of their careers to do something potentially historic.”

Asked if Sanders is a pragmatist, Sen. Brian Schatz (D-Hawaii) offered a clipped “yes” for an answer: “I don’t want to get him in trouble.”

This isn’t the first deal Sanders has cut, and it probably won’t be the last. In 2014 he memorably teamed with the late Sen. John McCain (R-Ariz.) on a landmark agreement to reform the scandal-plagued Veterans Affairs Department. As part of that agreement, Sanders signed off on expanding private care access for veterans, a concession directly at odds with his long-standing commitment to single-payer health care. Sanders also struck an alliance last year with Sen. Josh Hawley (R-Mo.) in pushing for new pandemic stimulus checks.

“He’s obviously a passionate advocate. But he also understands this is a moment that we can’t let go by,” said Michigan Sen. Debbie Stabenow, a member of the Budget Committee and Democratic leadership. “He was able to read the room.”

Sanders is already digging in for the next round of fights. He may have centrist Sen. Mark Warner (D-Va.) and the rest of the Budget Committee on board with his budget plan, but he still needs to win over more conservative Democratic Sens. Joe Manchin of West Virginia and Kyrsten Sinema of Arizona. Manchin said he hasn’t yet talked to Sanders about the proposal.

Once again, Sanders is drawing a line in the sand, saying he’s not coming down any more from $3.5 trillion. Time will tell whether this one is real or tactical.

“No. Quite the contrary,” he said, hinting that progressive allies across the Capitol might drive the price back up. “We’ll see what happens in the House.”