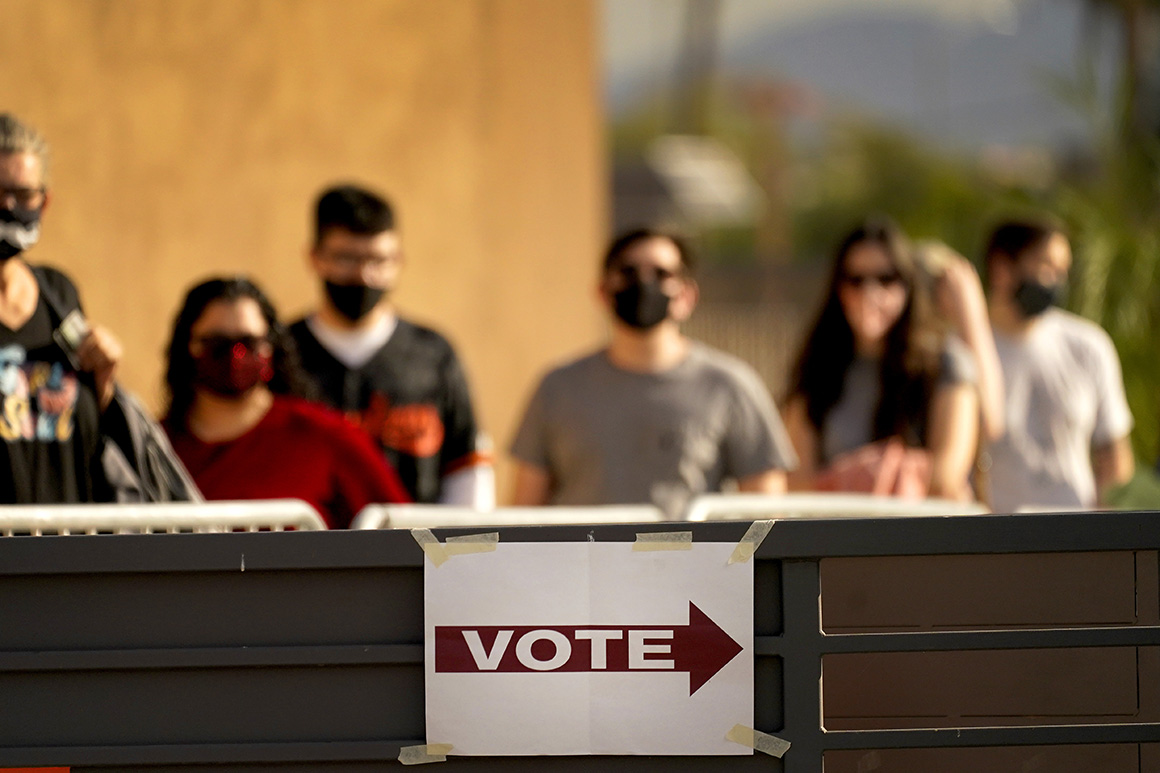 The Supreme Court ruled Thursday in favor of the state of Arizona in a high-profile voting rights case, once again reining in the impact of the Voting Rights Act by taking a narrow view of when state voting practices can be held to violate the rights of minorities.

The justices split 6-3 along ideological lines, with the Republican-appointed majority concluding that disparate impacts on minority groups would typically not be enough to render voting rules illegal under the act.

The decision, in a pair of cases from Arizona about out-of-precinct voting and collection of mail-in ballots, could make it more difficult for voting rights activists to challenge a slew of new voting restrictions Republicans are seeking to implement in states across the country.

The court’s majority opinion, from Justice Samuel Alito, does not offer a bright-line test for future cases. However, he stressed that rules posing only a modest burden on voters would not usually amount to a violation of the act.

“Every voting rule imposes a burden of some sort. Voting takes time and, for almost everyone, some travel, even if only to a nearby mailbox. Casting a vote, whether by following the directions for using a voting machine or completing a paper ballot, requires compliance with certain rules,” Alito wrote.

Alito also stressed that not every disparity in impact on minority voters would run afoul of the law.

“The mere fact there is some disparity in impact does not necessarily mean that a system is not equally open or that it does not give everyone an equal opportunity to vote. The size of any disparity matters,” he wrote. “What are at bottom very small differences should not be artificially magnified.”

All the court’s liberals dissented, joining an opinion by Justice Elena Kagan that portrayed Thursday’s ruling as part of a profound and ongoing curtailment of the landmark 1965 voting rights law by the high court.

Kagan pointedly accuses the conservative justices of betraying a principle they claim to hold dear: that statutes should be unfailingly interpreted according to the text Congress enacted.

“The majority fears that the statute Congress wrote is too ‘radical’ — that it will invalidate too many state voting laws,” Kagan writes. “So the majority writes its own set of rules, limiting Section 2 from multiple directions.”

Language added to the Voting Rights Act in 1982 prohibits states or localities from employing any election practice which “results” in the infringement of voting rights “on account of race.”

Alito said in his majority opinion that practices adopted in many states at the time that amendment was adopted would also generally be permissible, even if they had some adverse impact on minority voting.

“We doubt that Congress intended to uproot facially neutral time, place, and manner regulations that have a long pedigree or are in widespread use in the United States,” Alito wrote. He also noted that in 1982 most states “required nearly all voters to cast their ballots in person on election day” and had strict limits on absentee voting.

However, the court left open the question of whether a state’s decision to return to the practices of four decades ago would pass muster under the VRA’s ban on voting procedures that result in discrimination.

In a suit the Justice Department filed last week against Georgia over its newly-enacted voting rules, Biden administration lawyers seemed to be trying to steer clear of the uncertainty about the so-called “results” test.

Instead, the department based its suit entirely on the claim that the state’s changes were motivated by a desire to limit African Americans’ voting strength. The use of the Voting Rights Act to challenge practices that are intentionally discriminatory has been largely undisputed since the landmark civil rights law’s passage in 1965.

The rulings come amid a broad push by Republican-led legislatures across the country to consider or enact new voting laws that would add restrictions on how voters access the ballot box, often in the name of “election integrity.” The proposals follow a sustained push by now-former President Donald Trump, who continues to spread lies about the 2020 election, insisting he won an election that he lost.

The cases decided Thursday involved challenges to a 2016 Arizona law banning what critics dub “ballot harvesting” and to the state’s longstanding policy allowing counties to disregard ballots cast by voters who show up at the wrong precinct.

A lawyer arguing on behalf of Arizona’s state Republican Party, Michael Carvin, contended Arizona’s laws don’t prevent anyone from voting — so the Voting Rights Act should only apply if someone can prove the rules were enacted for racial reasons.

“Arizona has not denied anyone any voting opportunity of any kind. It’s not like a literacy test that denies you the right to vote,” said Carvin. “Everyone here is eligible and registered to vote. All they have to do is utilize the myriad opportunities that Arizona has offered them.”

Carvin noted that about 80 percent of Arizonans already cast their ballots by mail, but Justice Sonia Sotomayor said many Native Americans in the state don’t get mail delivery at their homes, and some Hispanics in rural areas lack cars to get to post offices that are often far away.

“If you just can’t vote for those reasons and … your vote is not being counted, you’ve been denied the right to vote, haven’t you?” she asked. “You’re denied something if you’re not given the right to vote, or it results in your denial from circumstances that the state could remedy easily.”

Kavanaugh repeatedly signaled that he favored an interpretation where courts would look more skeptically at changes that adversely affect minorities than at challenges that focus on existing practices. He also said rules that are “commonplace” in states that don’t have a history of racial discrimination might be presumed to be acceptable.

However, Carvin cautioned that suspicion about changes to election procedures could leave politicians concerned about “ballot integrity or security … hamstrung” by the actions of their predecessors. He warned the court that a murky standard would result in “an amorphous, manipulable situation where no one knows what the rules are going into the next election.”

Even Sotomayor, who is widely considered the court’s most liberal justice, suggested Arizona’s newfound interest in limiting who can collect absentee ballots was more dubious than the state’s well-established policy refusing to count out-of-precinct votes in counties with precinct voting.

“It’s been around for a long time,” Sotomayor said of the precinct-voting rule.

Arizona state Attorney General Mark Brnovich urged the justices to be cautious about using “statistical anomalies” to overturn state rules designed “to uphold the integrity of the election process.” He argued that rejections for out-of-precinct voting are very rare in Arizona, given that most voters vote by mail.

While Roberts seemed generally sympathetic to the position taken by Democrats in the cases, he also made clear he doesn’t think absentee-ballot fraud concerns are frivolous. He repeatedly referred to a 2005 report by former President Jimmy Carter and former Secretary of State James Baker that said such ballots have historically been the focus of fraud efforts.

Carter has broadly chided conservatives for continuing to cite the Carter-Baker report. “In the 16 years since the report’s release, vote-by-mail practices have progressed significantly as new technologies have been developed,” he said in a statement responding to Georgia Republicans’ legislative proposals, days after the oral arguments in the Arizona cases. “In light of these advances, I believe that voting by mail can be conducted in a manner that ensures election integrity.”

Under Trump, the Justice Department filed a brief that did not go as far as the state or the Republicans, but largely sided with their view. In February, with new officials in charge under President Joe Biden, the department withdrew its support for that brief.

However, at the arguments in March, Deputy Solicitor General Ed Kneedler stood by the Trump administration’s position that neither of Arizona’s challenged practices at issue in the cases violates the Voting Rights Act.