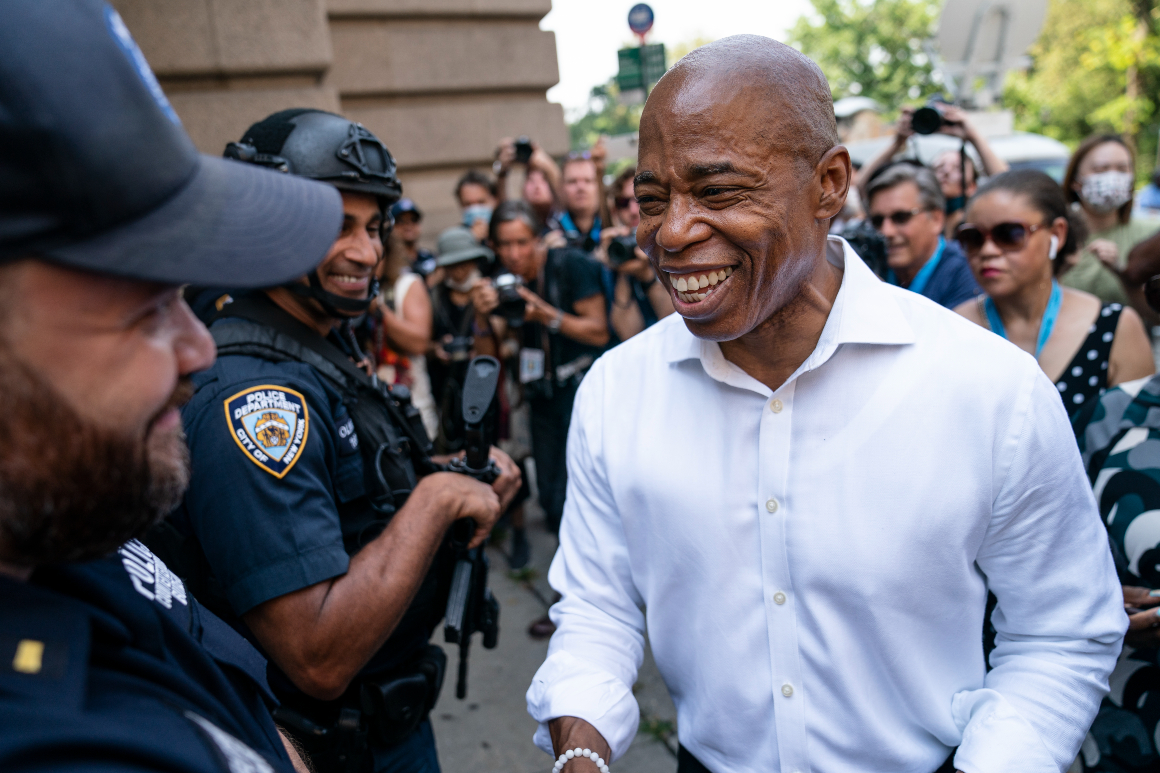 NEW YORK — To hear Eric Adams tell it, his win in the New York City Democratic mayoral primary should send a message that resonates across the country.

He sounded the theme again Wednesday after officially winning the nomination with a centrist message focused on public safety: “I know how we can turn around not only New York, but America.”

The theory that moderates are the future of the Democratic Party will be tested soon both in the midterm congressional elections and mayoral races from Seattle to Boston where the dynamics that drove New York City’s race will play out amid a national surge in gun violence and local economies sputtering toward recovery.

Adams ran as a moderate and the central argument of his campaign was that he’s uniquely positioned to balance police reform while reversing a surge in crime. He excoriated rivals to the left he deemed “fancy candidates” for tiptoeing around gun violence with academic and untried solutions. It proved a winning message in one of the most liberal cities in America where self-styled progressive Bill de Blasio has been mayor for nearly eight years.

Last year, amid national protests over the murder of George Floyd, progressives raised the banner of “defund the police” and called for an end to the carceral state that disproportionately imprisons Black and Latino Americans. But the gunplay and violence that would surge in the intervening months had an outsize effect on those communities as well — and voters in those neighborhoods formed Adams’ strongest base of support.

Yet, while national Democrats may take lessons from Adams’ pro-public safety message, political strategists, observers and politicians themselves warn against drawing far-reaching conclusions from a race shaped by a unique candidate in a city with unique dynamics.

“We see in an election a confirmation of our own biases. But the reality is always more complicated, especially in a city as variegated as New York,” he added.

Adams won his narrow victory by dominating in Black, Latino and working-class white neighborhoods outside of Manhattan, defeating both Maya Wiley, the progressive favorite, and Kathryn Garcia, a technocrat who won more affluent neighborhoods.

Adams has a unique biography, as a politician who grew up under hardscrabble circumstances, was beaten by cops and went on to join the police department himself where he became a prominent voice for reform. He is difficult to pigeonhole both politically and personally: a dedicated vegan, he also made waves by publicly drowning rats.

“He has his finger on the pulse of communities of color. Striking a balance between public safety and police reform is going to be immensely complicated, but he’s uniquely equipped to navigate it because he’s had the experience of both a Black man and a police officer,” Torres said.

A variety of factors helped Adams’ message resonate in the first citywide ranked-choice election: New York saw a sharp spike in shootings, pushing crime to the front of many voters’ minds, even as the city reopened and concerns about Covid-19 receded. Two progressive candidates saw their campaigns implode over sexual misconduct allegations and staff unrest, and the left was late to coalesce around Wiley.

Adams has also been preparing for the race for years, cultivating allies in the city’s Democratic establishment, building a campaign warchest and racking up union endorsements.

Some see his win as a referendum on his public safety stances, which included opposition to defunding the police, a call to reinstate the NYPD’s controversial plainclothes anti-crime unit and a proposal to spot check bus passengers arriving in the city for guns.

But equally important in his win, backers say, is his long record of advocating against police misconduct.

“He was Mr. Reform — any time you saw an injustice anywhere, any time you saw a police-involved shooting,” said Queens Borough President Donovan Richards, who supported Adams. “He was the face of all that. And that’s part of why the community … trusted him.”

Democratic operatives and politicians are divided on whether the Adams playbook translates outside of New York City.

“Democrats should look no further than a mayoral primary in one of the most progressive, traditionally Democratic cities in the country,” said New York City-based Democratic strategist Jon Reinish, a former adviser to Sen. Kirsten Gillibrand. “This victory should send an immediate message to all Democrats that the so-called defund the police movement is an ineffective one.”

That message will be tested in Boston’s upcoming mayoral race, where the parallels between Adams and Boston City Councilor Annissa Essaibi George are plainly clear.

Essaibi George is the most police-friendly candidate in the race and has locked up key public-safety endorsements by calling for reform without budget cuts, unlike some of her biggest foes.

The Democrat has also effectively steered herself into the more moderate lane of the nonpartisan race for the office vacated by her childhood neighbor Marty Walsh, who traded in his plans to run for a third term as the city’s mayor to serve as Biden’s Labor secretary.

Essaibi George, like Walsh before her, polls well among working-class white voters — a dependable voting bloc in Boston that could push the councilor, who’s currently third in most recent public and internal polls, over her more left-leaning rivals.

That may be even more likely if progressives split the vote — a scenario that’s played out in several open-seat Massachusetts primaries recently. Essaibi George only needs to land in the top two to advance from the September preliminary to the November general election.

But the two top-polling candidates, City Councilor Michelle Wu and Acting Boston Mayor Kim Janey, both progressives, still enjoy wider name recognition in a smaller city where politics is still very much about who you know. And the crime wave that propelled Adams to victory in New York is not as prevalent in Boston, where the police department is currently embroiled in scandal, bolstering calls for reform.

A more direct parallel seems to be playing out in Seattle, another liberal bastion, where the message of defunding the police has lost momentum. Like New York City, there was a cry to cut that city’s police department budget in half last year. At a mayoral debate late last month, there was barely a mention of cutting police funding.

“A number of candidates campaigned openly that what Seattle really needs right now is more cops — which is quite a political shift from a year ago,” wrote Seattle Times columnist Danny Westneat.

But progressives are taking stock of Adams’ success and what it could mean for campaigns elsewhere. Sean McElwee, who heads the polling firm Data for Progress, said far-left candidates have “tiptoed around the issue of crime” and must find ways to address it head on.

“I do think this shows that progressives need to take crime more seriously,” he said. “Far too much of our messaging has been focused merely on what we don’t like, and not enough has been on solutions that communities can sort of respond positively to.”

Others are more skeptical the race’s impact will translate beyond the five boroughs. De Blasio also cast his 2013 victory as a bellwether win for national progressives — a vision that never panned out.

“Every big winner like Eric Adams likes to think of his win as a model for the nation, and a model ideally for higher office,” said Democratic strategist Max Burns. “The effects nationally will likely be muted to non-existent. It doesn’t strike me as likely that someone running a race in Minneapolis or in Cleveland is going to be looking to the Eric Adams playbook.”

Like Adams, President Joe Biden’s success as a moderate in the Democratic primary owes a lot to Black voters who tend to be more conservative than their white counterparts in the party. But also like Adams, his success was more down to the candidate than the message, says Jordan Ragusa, a political science professor at the College of Charleston and co-author of “First in the South: Why South Carolina’s Presidential Primary Matters”

“Biden’s appeal here was personal,” Ragusa said. “I don’t think policy was the leading thing that drove his victory.”

Biden put in a lot of hours campaigning in the state during his career in politics and was a known quantity to voters there, much like Adams was to voters in Brooklyn and Queens where he was strongest. Adams grew up in Queens and served as a state senator representing Brooklyn before becoming the borough’s president.

“When [Rep. Jim] Clyburn endorsed [Biden], he said famously, ‘I know Joe, we know Joe. But most importantly, Joe knows us,’” Ragusa recalled. “He focused on the personal to a greater extent than the other candidates because he could.”

David Giambusso and Joe Anuta contributed to this report.