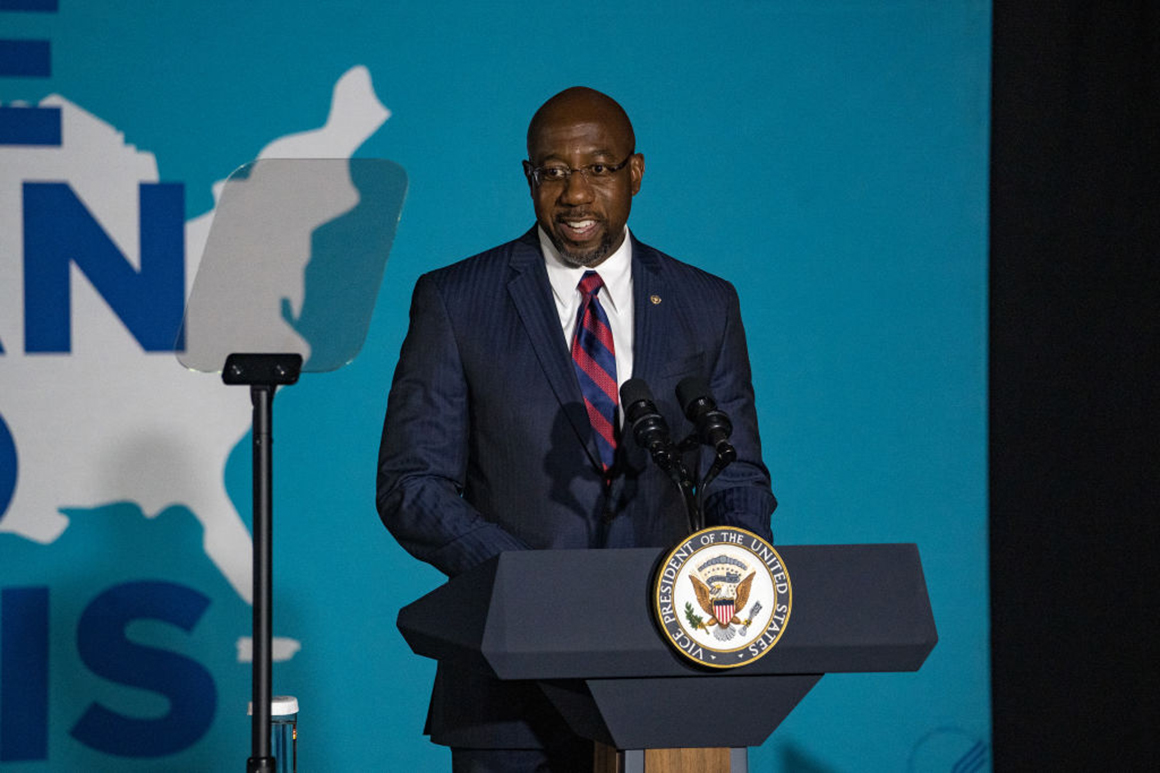 Democrats shattered fundraising records in 2020 to narrowly win their fragile 50-50 Senate majority, and so far they’re keeping up the momentum in the fight to hold onto it.

The four most vulnerable Democratic incumbents — Sens. Mark Kelly in Arizona, Raphael Warnock in Georgia, Catherine Cortez Masto in Nevada and Maggie Hassan in New Hampshire — all increased their fundraising pace in the second quarter of this year. The incumbent senators stretched their early cash advantages while the Republican primaries to face them are still forming.

Republicans need to win just one of those seats back to recapture the majority. But they also have to hang on to their own seats. Republicans are defending five states where GOP incumbents retired — Alabama, Missouri, North Carolina, Ohio, Pennsylvania. And two other potential swing-state senators — Sens. Ron Johnson of Wisconsin and Chuck Grassley of Iowa — haven’t yet said if they’re running again, but started to ramp up their fundraising over the past three months.

Here’s a breakdown of the most important takeaways from the second fundraising quarter:

Warnock led the way among swing-state incumbents with $7 million raised and $10.5 million in cash on hand, while Kelly raised $6 million and had $7.6 million on hand. Both senators picked up where they left off after winning hard-fought special elections.

They were among the top spenders in the past quarter, too. But the vast majority of the massive spend went back into fundraising. During the quarter, Kelly spent $725,000 on digital advertising, and Warnock spent nearly $950,000 on digital consulting — investments that will likely bolster their already robust small-dollar programs.

In Georgia, all eyes are on Herschel Walker, who isn’t yet a candidate and hasn’t started fundraising. In the meantime, veteran Latham Saddler raised an impressive $1.4 million; state Agriculture Commissioner Gary Black raised $703,000 in just a few weeks; and Kelvin King raised about $671,000, including a $300,000 candidate loan. Walker will likely be the behemoth in this race given his background and pre-endorsement from former President Donald Trump, but the other Republicans are raising enough to compete. Rep. Buddy Carter raised just low-six figures, but the Savannah-area congressman has $1.8 million in the bank if he decides to run.

Meanwhile, Hassan raised $3.3 million, while Cortez Masto raised $2.8 million. Each has just shy of $7 million on hand. Republicans have preferred candidates in both races: Gov. Chris Sununu in New Hampshire and former state Attorney General Adam Laxalt in Nevada. Each could essentially clear their primary field if they run, so they can take their time deciding. But the wait is giving Democrats a head start financially.

Rep. Ted Budd, who secured Trump’s endorsement in the three-way, open-seat North Carolina Senate primary, raised $953,000 in his first quarter in the race, including a $250,000 candidate loan. He came in behind former Gov. Pat McCrory, who raised nearly $1.3 million in the quarter. Former Rep. Mark Walker rounded out the field with roughly $203,000.

In Alabama, Rep. Mo Brooks raised $824,000 for the quarter after being endorsed by Trump in early April. But he was well behind Katie Boyd Britt, who raised more than $2.2 million in just a few weeks after joining the race in June. Britt, a former chief of staff to retiring Sen. Richard Shelby, had almost $2.2 million on hand compared to $1.7 million for Brooks. Lynda Blanchard, a former ambassador, raised just $191,000, but she’s sitting on by far the most in the race, $5.2 million, most of it from a loan she gave the campaign earlier this year.

And Sen. Lisa Murkowski (R-Alaska) ramped up her fundraising in her first full quarter with a Trump-endorsed Republican challenger. Murkowski raised $1.1 million for the quarter, three times more than she raised the previous quarter, and has $2.3 million in the bank. She’s got a hefty financial advantage over Republican Kelly Tshibaka, who raised $544,000 and has $276,000 in the bank.

There are major benefits to Trump’s endorsement in a primary that won’t show up in an FEC report. Trump remains highly popular among the GOP base, and his endorsement is great ad fodder: Budd is already running radio ads touting the backing. The former president has promised to campaign in Alaska and is expected to rally soon in Alabama, events that will drive earned media for his preferred candidates. But the fundraising reports show that there’s plenty of opportunity for non-Trump candidates to run strong campaigns in these primaries.

Undecided Republicans step it up

Three key senators who have yet to officially declare their 2022 intentions raised enough money to keep their midterm options open. Johnson has pointedly said he won’t decide anytime soon whether to run again, though that has concerned some Republicans who want to see the race start sooner. But Johnson did step up his fundraising this past quarter, hauling in $1.2 million — more than double what he raised in the first three months of this year.

Grassley has similarly said he’ll wait until fall to make a decision on seeking an eighth term. Iowa has been solidly Republican recently, but a Grassley retirement could add some uncertainty if there’s a GOP primary to replace him. He raised $625,000 in the quarter, more than double his most recent haul. Meanwhile, Murkowski’s $1.1 million was more than triple her previous quarter — though she, too, has yet to say officially whether she’s running again.

None of these fundraising hauls are declarations of intent. But all three senators are ramping up their campaign apparatuses should they decide to officially hit go on reelection bids.

Meanwhile, Sen. Marco Rubio (R-Fla.) is the only swing-state GOP incumbent who’s off to the races. Rubio significantly ramped up his fundraising, hauling in $4 million and sitting with $6.2 million on hand. He faces an expensive challenge from Democratic Rep. Val Demings, who raised $4.7 million in the quarter after investing heavily in small-dollar fundraising around her campaign launch. She already has $3.1 million in the bank.

Primary fields remain up for grabs

Both parties have to navigate competitive primaries in critical, open-seat battlegrounds next year.

In North Carolina, Democrat Cheri Beasley led the field in her first quarter in the race with $1.3 million, a solid showing for the candidate with backing from groups like EMILY’s List and The Collective PAC. But Beasley and state Sen. Jeff Jackson are near parity in cash: Jackson has $865,000, Beasley has $833,000. Former state Sen. Erica Smith is in the mid-five figures. The third quarter will be pivotal there to see if Beasley can sustain her initial fundraising.

John Fetterman remains the financial behemoth in Pennsylvania, raising $2.5 million and holding $3 million on hand. But the Democratic lieutenant governor’s fundraising slowed down from his massive first quarter. Another Democrat, Val Arkoosh, topped $1 million in her first quarter. State Rep. Malcolm Kenyatta raised half a million dollars, and Rep. Conor Lamb, who hasn’t officially joined the race but is expected to run, was just under $1 million and has $1.8 million on hand.

On the Republican side, Missouri is wide open. State Attorney General Eric Schmitt was the only candidate to top $1 million in the second quarter. Rep. Vicky Hartzler, who is already running, and Rep. Ann Wagner, who’s considering a bid, both raised in the high-six figures. Reps. Billy Long and Jason Smith, who are also considering running, came in behind them but still comfortably in six figures. Disgraced former Gov. Eric Greitens and controversial lawyer Mark McCloskey raised mid-six figures as well. That all amounts to more than a half-dozen potential candidates who are relatively well funded. The rest of this year will determine which candidates have true staying power — or whether a less well-funded candidate could slip through a divided field.

The Ohio GOP race, by contrast, is shaping up as one of the most expensive primaries ever. Bernie Moreno raised $2.2 million in his first quarter as a candidate, with no self-funding. Jane Timken topped $1 million raised for the second quarter in a row. Josh Mandel raised seven figures and has $5 million in the bank. Mike Gibbons loaned himself $5.7 million to lead the cash battle. Every candidate in the primary has seven figures on hand, and that’s all before J.D. Vance even announced his bid. Buckle up, Ohioans.