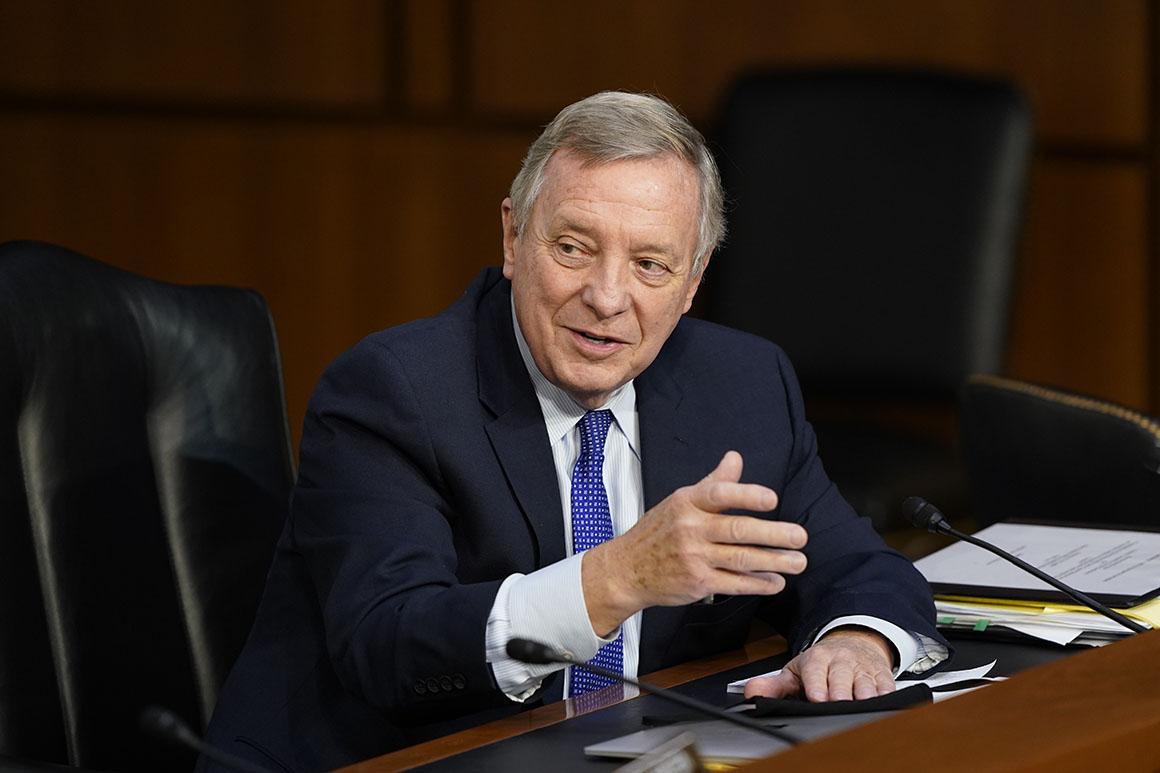 As police reform talks edge closer to collapse and Democratic priorities from gun control to immigration stall, the Senate is chugging ahead on an overhaul of the U.S. criminal justice system that advanced under Trump. Senate Judiciary Committee Chair Dick Durbin (D-Ill.) described criminal justice reform as a “personal priority” for himself and his GOP counterpart, Iowa Sen. Chuck Grassley.

“Most of the legislation we’ve passed has been strong, bipartisan,” Durbin said in an interview. “So we’ll work toward getting that consensus support on the floor.”

Backers of this year’s criminal justice legislation acknowledge it’s a more modest effort than the 2018 criminal justice reform bill, a rare moment of unity during Trump’s presidency. They also admit that getting Senate GOP buy-in might be tougher without Trump around. But advocates argue that the current bills mark a necessary next step and that Congress has little time to act to build on the Trump-era law known as the First Step Act.

Any bipartisan legislation that passes Congress could help define President Joe Biden‘s legacy on crime. Parts of the 1994 crime bill, which Biden played a key role in shepherding through at the time, have since faced sharp criticism from progressives who say it contributed to mass incarceration — and Biden himself apologized for his decades-old stance during his White House campaign.

Durbin isn’t alone in his optimism that the Biden administration can make its own progress on building a more equitable justice system. House Democratic Caucus Chair Hakeem Jeffries (D-N.Y.) said this week that he expects both chambers will “be moving a series of bipartisan criminal justice reform bills … to deal with the mass incarceration epidemic that we have in America and the over-criminalization problem which both Democrats and Republicans recognize as a challenge that must be decisively tackled.”

Whether Republicans back criminal justice reform to the extent that they did in 2018 remains to be seen. The First Step Act, which included sentencing as well as prison reform provisions, passed the Senate with 38 GOP votes but only after many conservatives got on board following a personal appeal from Trump. A potentially stronger deterrent than a Democrat in the White House, for some Republicans weighing this year’s bills, is the current increase in violent crime.

“A bigger issue is the big rise in crime in the last year,” Grassley said in an interview. “I think that’s the biggest impediment, not because Trump’s not president.”

Durbin countered that the package he is working on with Grassley, a trio of bills, focuses on non-violent crime.

But, more so than his committee’s ranking Republican, the Illinois Democrat agreed Trump’s absence is having some effect on the GOP outlook for criminal justice reform.

“Some of them who had no open opposition to the First Step Act are more skeptical now that Trump is out of office,” Durbin said. “His blessing on that effort ended up being a big factor for some Republicans, but I have to say many others stayed loyal to the cause.”

Holly Harris, president and executive director of the Justice Action Network, described the Senate Judiciary Committee as the “most difficult platform for bipartisanship in all of politics” but predicted that “a lot of these lawmakers are going to be reminded of the really positive narrative that surrounded the bipartisan cooperation involved in development” of the 2018 law.

So far, the Senate Judiciary Committee has approved three bills co-sponsored by Durbin and Grassley. 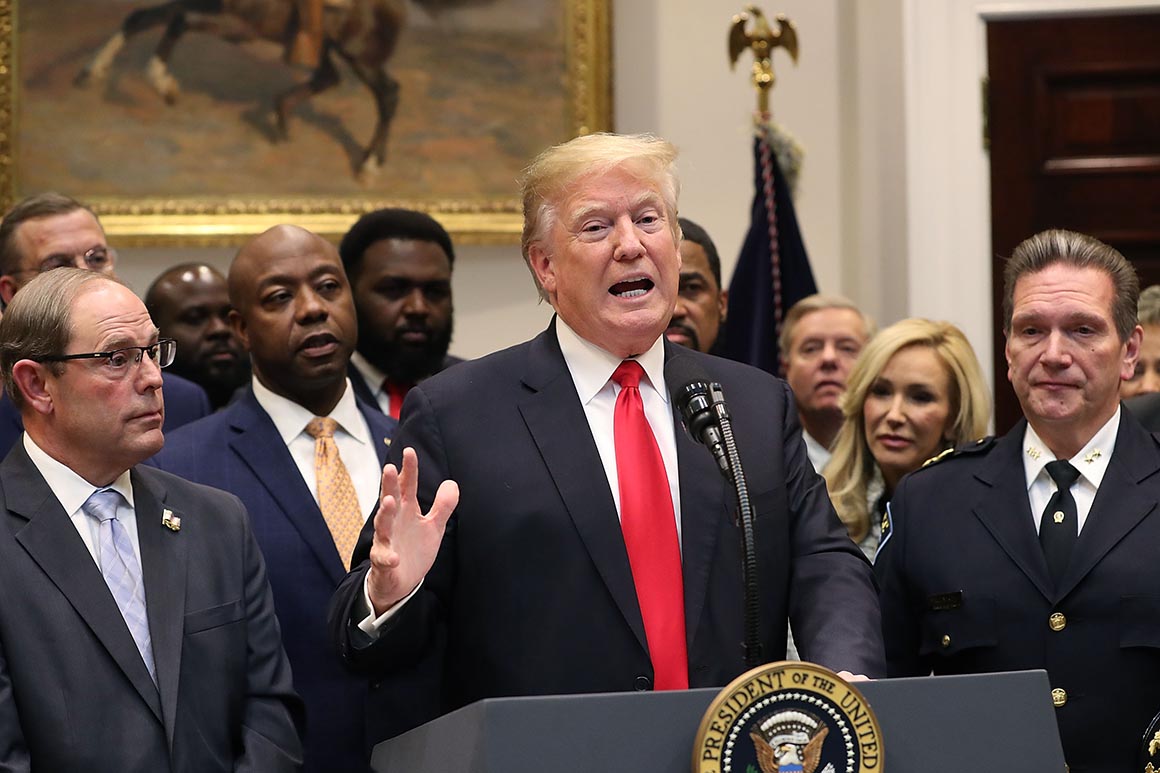 The first would give inmates the ability to petition for the sentencing changes established in 2018 to apply retroactively, among other provisions. The second would prohibit a judge from considering any conduct for which a defendant was acquitted in sentencing. Finally, the third would expand eligibility for a program that allows elderly prisoners to serve out the remainder of their sentences at home. That measure also includes a provision that would allow vulnerability to Covid-19 to qualify as a reason for compassionate release.

But criminal justice reform advocates are pushing for the inclusion of more provisions in a larger package, especially legislation that would eliminate the sentencing disparity between crack and powder cocaine offenses. The Biden administration recently backed the bill, and Durbin’s committee held a hearing on it last month that featured GOP Gov. Asa Hutchinson (Ark.), a former Drug Enforcement Administration chief, and Matthew Charles, the first person released from prison after the First Step Act passed in 2018.

The road to closing that crack-cocaine sentencing disparity, a longtime progressive cause, is a hard one. Senate conservatives aren’t expected to sign on; during the recent hearing, for example, Sen. Ted Cruz (R-Texas) questioned why the committee wasn’t more focused on drug trafficking at the U.S.-Mexico border.

Grassley also has yet to back the legislation, and it only counts two Senate Republican supporters, Rob Portman of Ohio and Rand Paul of Kentucky. The bill builds on a 2010 bill Durbin co-authored with then-Sen. Jeff Sessions (R-Ala.) that reduced the sentencing disparity from 100-to-1 to 18-to-1.

“We’re in a position right now where I think a lot of people are wondering what that second step on criminal justice reform looks like,” said Jason Pye, director of rule of law Initiatives at the nonprofit Due Process Institute. “You have these three bills, but there’s a lot more that we can do.”

Grassley suggested that a bipartisan package could include other priorities, outside of his three bills with Durbin, and warned that “each of us are going to have to give some in order to get a package put together.”

The Iowa Republican posited that a compromise could be within reach on reducing the sentencing disparity between crack and powder cocaine, but that eliminating it entirely “maybe is a stretch for Republicans.”

Advocates are hoping to see further movement before Congress leaves for its scheduled August recess. However, both Grassley and Durbin suggested that could be a heavy lift, given their limited days left in session and the intense focus on moving through both the bipartisan infrastructure deal and reconciliation. Durbin said he is working to pass his bills by voice vote, but if that doesn’t work he will ask Senate Majority Leader Chuck Schumer (D-N.Y.) for floor time. Grassley predicted that some time in the fall would be more likely.

Meanwhile, some advocacy groups like the ACLU are pushing for Biden to do more when it comes to clemency for inmates in prison for drug-related crimes and commuting the sentences of individuals released to home confinement during the pandemic.

As Congress enters the second half of the year, proponents of criminal justice reform are confident that some type of legislation will get through, given the ideological range of groups pushing for change.

“Each member, both Republican and Democrat, have very much an interest in it based upon inequities that have happened because of past tough on crime legislation,” Grassley said. “But something that really helps is when you have a broad coalition of the most liberal and the most conservative interest groups in the United States working together for it.”