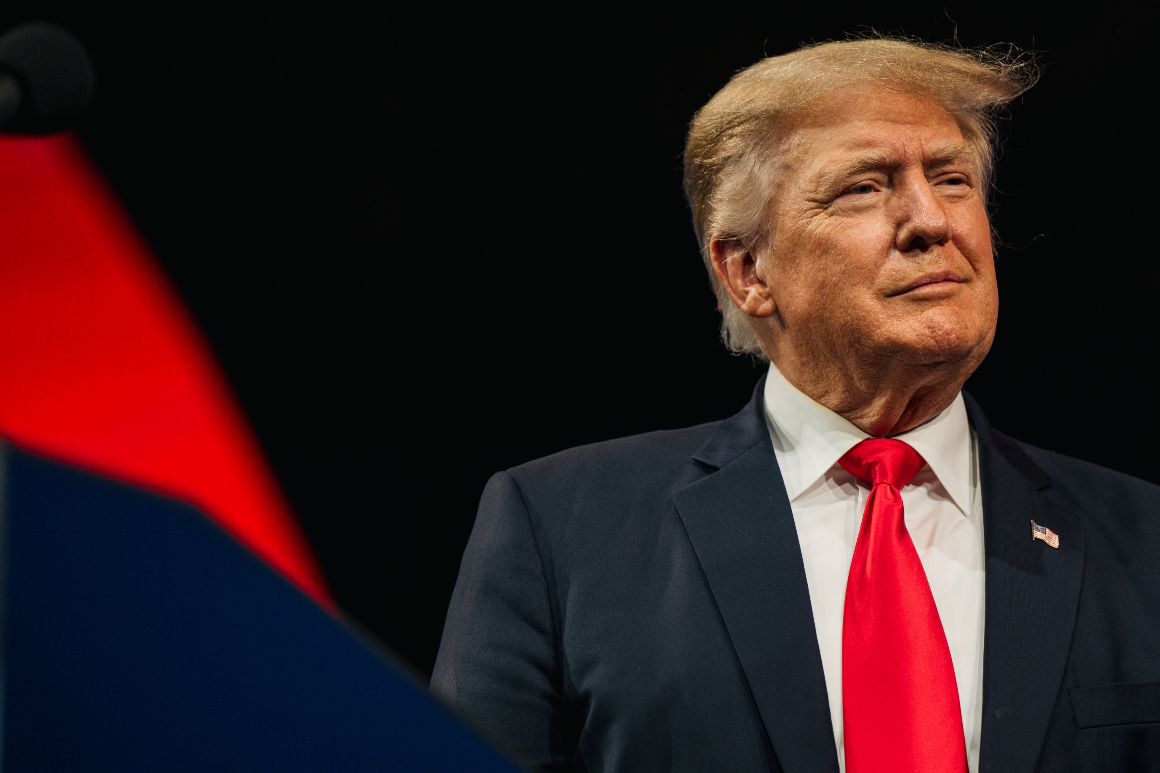 Donald Trump and his advisers are convinced that if he runs again for president in 2024, the Republican nomination will be his. Their confidence is so supreme that they view almost all of the emerging field not as competition but as possible vice presidential picks.

No formal vetting process is in place, and there is no expectation that Trump, should he run, will do so unopposed in a Republican primary. But allies of the former president are already keeping tabs on how GOP officials with presidential ambitions are addressing Trump himself and the legitimacy of Joe Biden’s election.

“You can’t wait to run for president,” said one Trump adviser. “But those doing it now look like they’re dancing on the grave and the political body’s still warm.”

As things stand now, Trump is extremely unlikely to run again with former Vice President Mike Pence as his number two, advisers say. Some Trump aides have also written off Pence’s political future, at least at the presidential level, privately arguing that he has failed to capture anything close to the same kind of enthusiasm as Trump. They point to anger among the most diehard Trump supporters over Pence’s decision to carry out his Constitutional duty in certifying Biden’s election win.

“The vice president is an incredible man and was a great vice president, but he has a huge obstacle — problem — in trying to be the nominee after dealing with what he’s dealt with over the last six months,” said another Trump adviser, pointing to his recent reception at conservative events. Asked specifically if there was a chance Pence could serve as Trump’s number two again, the adviser replied: “zero.”

Bob Vander Plaats, president and CEO of The Family Leader, an influential social conservative group in Iowa, said it’s “been there, done that for both of them.”

“I think they know they need a fresh start if Trump runs again,” Vander Plaats said. “Is that a Nikki Haley, is that a Tim Scott, is that a Gov. Kim Reynolds? Or is that a Kristi Noem? You could see all of those making a big play for VP.”

But while Pence may be on the outs as a possible Trump 2024 VP candidate because of his role in overseeing the certification of the election, others in the GOP tent say his actions that day could position him well as a presidential aspirant himself. Pence and his advisers still enjoy strong roots in conservative circles. One former Trump official argued that Pence would benefit from having already answered the inevitable question about Jan. 6 while others “like Pompeo, who said that Trump would be inaugurated again, will have a harder time.”

Pence aides have made clear he is focused on helping Republicans get elected in 2022. And Pence, unlike other potential 2024 contenders, has never said publicly that he will bow out of the race if Trump gets in. The election is still 39 months away.

Bolton, through his PAC, has been producing reems of polling data making the case that the Republican electorate is less tied to Trump than conventional wisdom suggests. His most recent survey showed that only one-third of Republicans polled believe Trump is the strongest candidate to take on Biden in 2024, while 52 percent believe a “fresh face” would make for a stronger candidate.

Few others in GOP politics are willing to say the party would be well served in moving on from Trump. Instead, other potential 2024ers and their aides have begun engaging in a shadow campaign of sorts, presenting themselves as Trump understudies — ready to step in if the former president decides to skip a third White House bid, or serve as a capable VP pick for him.

The list so far includes lawmakers like Florida Gov. Ron DeSantis, South Dakota Gov. Kristi Noem, ex-Ambassador to the United Nations Nikki Haley, former Secretary of State Mike Pompeo, and Sens. Tim Scott, Ted Cruz, Tom Cotton and Josh Hawley. Some have been flocking to early voting states like Iowa and New Hampshire to make inroads with influential party leaders and activists, or have been criss-crossing the country to speak at events for 2022 candidates and at PAC fundraisers with deep-pocketed donors. None have announced their plans. And according to advisers, most, including Trump, are waiting until after the 2022 midterm elections.

“The best thing you can do is be out there for yourself and fundraising and stumping for candidates,” said a Trump adviser. “74 million people isn’t a base. It’s half the electorate. People are asking the wrong question — how do I keep Trump saying my name with a smile on his face? But they need to know how they should connect with his base.”

In the meantime, some are already trying to distinguish themselves from the competition. Noem traveled to Iowa last week to speak to conservatives in Des Moines and took not-so-veiled swipes at DeSantis over his state’s coronavirus restrictions. Noem rose to national prominence during the pandemic for bucking many government health recommendations in the name of freedom. Among all states, South Dakota has the 10th highest death rate from Covid-19.

Former New Jersey Gov. Chris Christie, who has fueled speculation he is running by writing another book, “Republican Rescue,” appeared to take a swipe at Haley when he said he’s not going to defer to anyone — Trump included. Haley, who was critical of Trump in the aftermath of the Jan. 6 riots on Capitol Hill, deferred to her former boss and said she would not run if Trump did.

Nevertheless, Trump picked up on her criticism (and not her deference) and barred her from making a trip to Mar-a-Lago. But she’s not entirely on the outs. Haley recently met with Jared Kushner and Ivanka Trump in Kiawah Island, South Carolina.

In early speeches to Republican loyalists, there is reluctance to take on Trump, with the 2024-curious choosing instead to only highlight the administration’s accomplishments, and brush over controversies like Jan. 6.

One of the exceptions may be Pence, who has said he and Trump won’t see eye-to-eye on that day. But even as he has defended his role in certifying the election results, Pence has mainly focused on outlining “Trump-Pence administration” accomplishments and praising his former political partner.

While Trump’s grip on the party appears firm, a smattering of recent polls suggest that DeSantis, among the shadow campaigners, has an opening. The Florida governor continues to poll second only to Trump as a potential nominee and top of the list without the ex-president. DeSantis is focusing on a run for reelection in 2022. But in a sign of his popularity — or, perhaps, an early attempt to claim alpha dog status — unofficial Trump merchandise stores have begun selling Trump-DeSantis 2024 shirts and flags. And if Trump decides not to run, already there is chatter among multiple former top Trump administration officials about helping out with a DeSantis campaign.

“If Trump decides to get in, everyone else will fall by the wayside or say, ‘Trump’s the guy, we’ll back out.’ Because if you’re seen running in the primary, that hurts you in ‘28, in your own reelection — so there’s a lot of calculation going into, would you want to primary Trump or not,” said a former Trump campaign adviser.