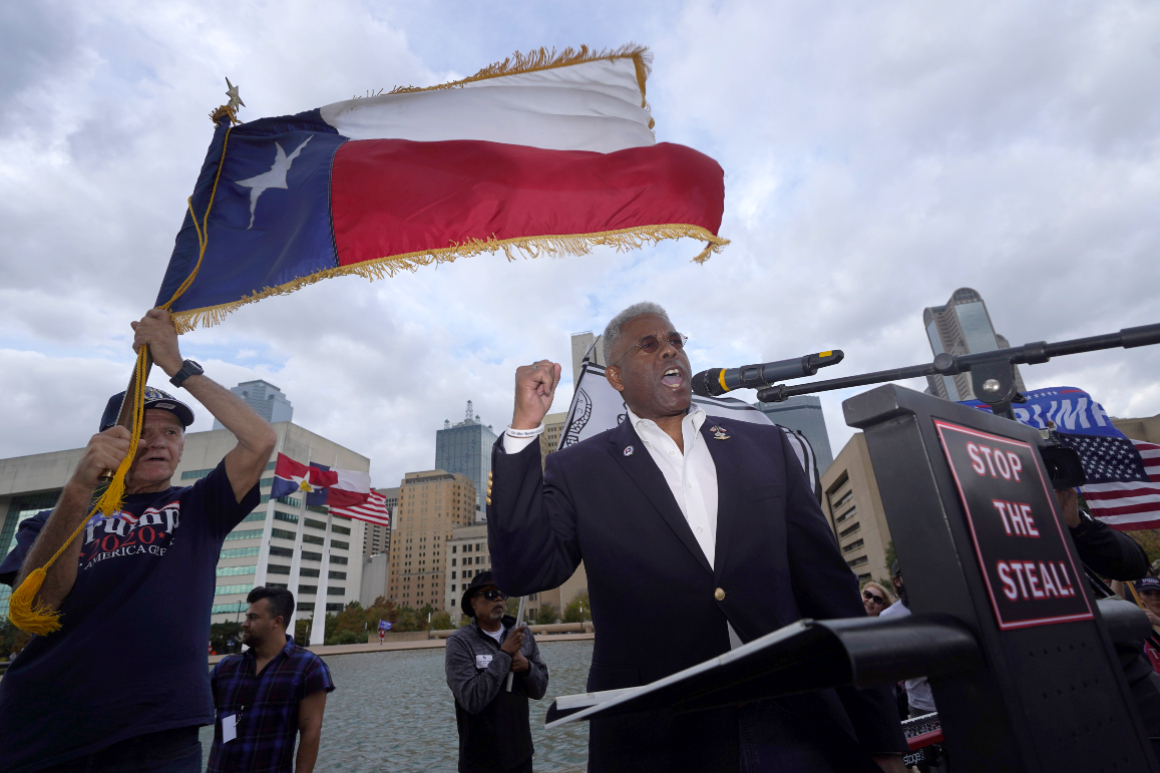 Even for a pol known for chaos and controversy, Allen West had a doozy of a first week as a Texas gubernatorial candidate.

Top state Republicans called on him to quit his post immediately as state GOP chair Tuesday, citing a conflict of interest with his campaign (he refused). He called the party’s vice chair “a cancer” on Wednesday (she’s a cancer survivor). Then West committed a Texas-sized error by heading Friday to Alaska for a joint Texas-Alaska GOP fundraiser bearing a title that strikes at Lone Star pride: “THE HEART OF ALASKA IS BIGGER THAN TEXAS.”

West’s bid for governor is a long shot: He moved to Texas only in early 2015 after serving a single term as a Florida tea party congressman. Gov. Greg Abbott appears to be in solid shape, with high approval ratings among GOP primary voters and a stunning $55 million in the bank.

But with his no-holds-barred style, West stands to complicate Abbott’s reelection campaign — which some Republicans view as a precursor to a 2024 presidential bid by the governor. 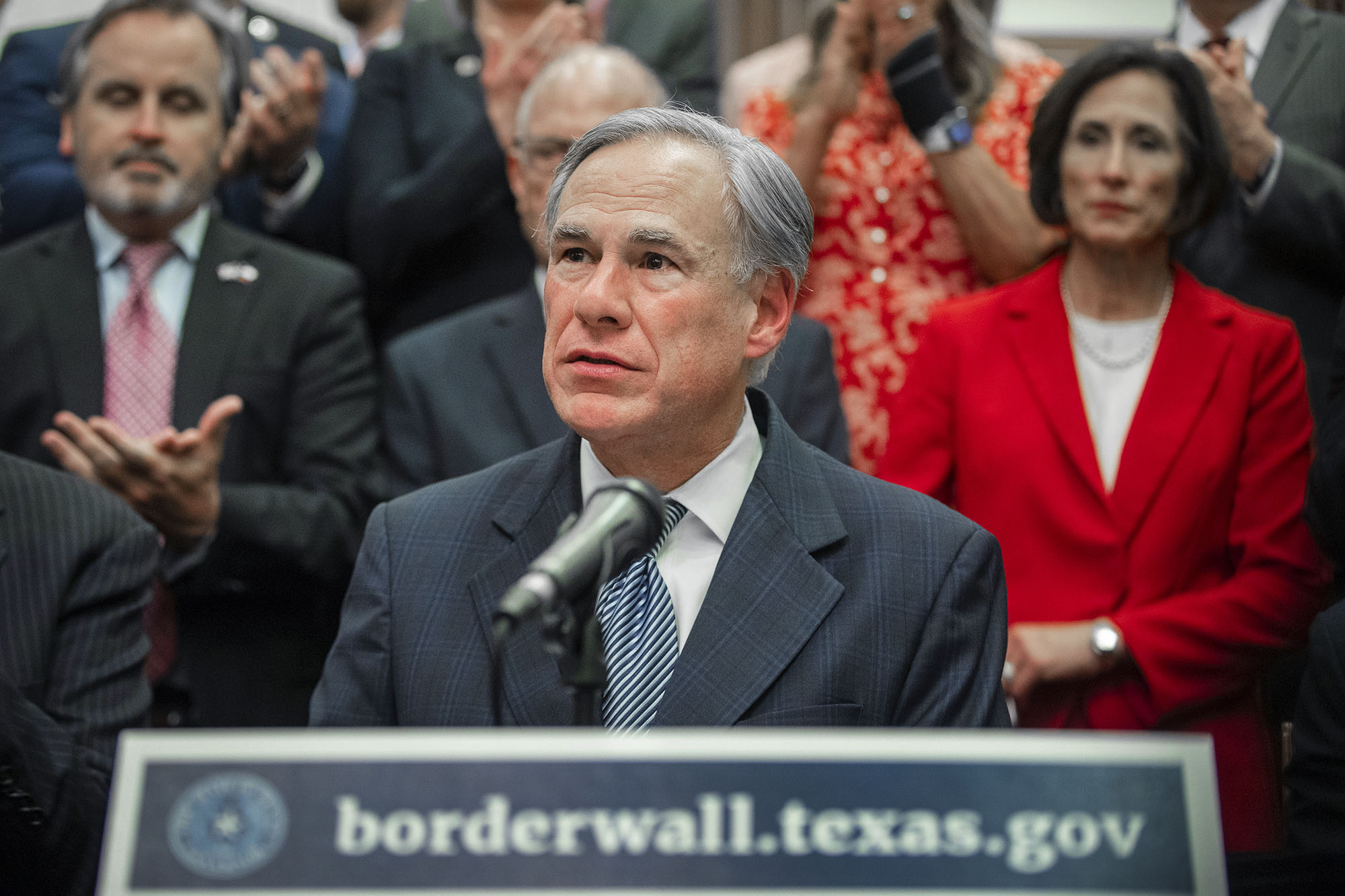 “Texans won’t agree with the event being billed as ‘the heart of Alaska is bigger than Texas,’ but Allen West has proven he has never understood our state,” Travis County GOP Chair Matt Mackowiak said. “We don’t like bullies, egomaniacs or jerks, and he is all three.”

In his brief time as a member of Congress, West gained national notoriety for his caustic rhetoric, including comparing Democrats to communists and Nazis. And he showed a knack for raising huge amounts of money. After losing his bid for a second term in 2012, West left Florida to lead the National Center for Policy Analysis in Dallas, suggesting in a news release that he was focusing “on policy, not politics.”

But many insiders expected West would run again for political office, speculation that intensified when he won election as Texas GOP chair in July 2020. West downplayed the talk even as he organized an unprecedented anti-Covid-lockdown rally targeting the incumbent governor of the party he nominally chaired.

With Abbott in such a commanding position — he has been endorsed by former President Donald Trump — West’s many critics in the Texas GOP think West himself might be using the governor’s race as a steppingstone for a presidential bid in 2024. After all, they ask, why is he fundraising in Fairbanks, Alaska?

“On day four of Allen West’s farcical campaign for governor of Texas, he finds himself 4,000 miles away in Alaska. Maybe he’s already running for president as scripture ordained?” said Mackowiak, the first signatory on a Tuesday letter from 18 county GOP chairs who called on West to quit his post as state party chair because of his “outrageous conflict of interest” in running for statewide office as a sitting party official.

West declined to be interviewed for this story. A West adviser, who was not authorized to speak on the record, said the Alaska GOP fundraiser’s title was just a “good-natured jab” from a state that has a complex about Texas. The adviser dismissed the week’s drama as a case of the establishment rallying to protect the incumbent governor.

Though polling shows Abbott is popular now, grassroots conservatives are still fuming over his initial decisions to lock down the state during the coronavirus pandemic. In addition to West, former Texas state Sen. Don Huffines and political commentator Chad Prather are challenging Abbott from the right, hoping to capitalize on that frustration.

“Allen West’s hard-charging entry into the race will absolutely force Abbott to ramp up conservative-sounding rhetoric and posturing because he knows he’s in trouble with the GOP primary voters,” said JoAnn Fleming, executive director of the Grassroots America – We the People PAC. “Abbott also has zero relationship with longtime conservative grassroots movement leaders in Texas.”

Fleming said that Huffines‘ primary campaign has already “pushed Abbott into noticing the crisis at the southern border.” Abbott advisers deny that his border security focus is motivated by political considerations.

Derek Ryan, a Texas Republican data analyst, echoed Fleming in assuming that the governor’s primary opponents “are all hoping to peel away enough votes from Abbott to force him into a runoff, where only the most conservative of voters will participate and give them a shot at beating Abbott — similar to how [Texas Sen.] Ted Cruz was able to win in 2012” over David Dewhurst, the state’s former lieutenant governor.

West is the best-known of the Abbott challengers, but Abbott’s team privately welcomes his candidacy. One Abbott adviser, who was not authorized to speak on the record, said West and all the other primary candidates will just dilute the anti-Abbott vote.

“The more the merrier,” said the adviser. “They’re dividing up about a quarter of the Republican vote that always votes against the incumbent.”

West has higher name ID than Huffines, according to Brendan Steinhauser, a Texas Republican strategist, but “Abbott is very well known among Texas voters and will have a huge war chest to make use of during the campaign. It’s going to be very difficult for West and Huffines to get their name ID up significantly among GOP primary voters.”

A recent University of Texas/Dallas Morning News Poll shows that, in a head-to-head matchup against Huffines, Abbott beats him 77-13 percent with Republican voters. The survey, which was conducted late last month, didn’t poll West because he wasn’t an announced candidate.

The poll, however, indicated that Abbott is essentially tied in a theoretical general election matchup against actor Matthew McConaughey, and Texas Republicans are privately nervous about Abbott going too far right because it might cost him in a general election.

With West and the others in the race, Abbott cannot afford to moderate his stances. He called legislators back into special session Thursday with a grab bag of primary-friendly bills to restrict voting, take on social media companies that “censor” Texans and fight critical race theory in schools.

At the same time, West is feuding with members of his own party. Not only did some demand he quit his party post immediately, but he also engaged in a war of words with the party’s vice chair, Cat Parks, in a disagreement over a GOP scorecard rating lawmakers, according to the Texas insider publication Quorum Report.

When a Republican posted the scorecard without party approval, Parks wanted West to intervene, but he blasted her instead, via email, saying that she was doing “nothing but seek to advance yourself and never raised any funds for the Republican Party of Texas. It is obvious your goal is to protect the failures of certain Republican legislators.”

Parks struck back and essentially accused West of using his “position at the Republican Party of Texas in an attempt to advance” his own political brand.

“You Ma’am are a cancer, do not EVER email me again,” West emailed back, claiming Parks does “nothing but create chaos and confusion.”

Parks — a cancer survivor — then asked the question that Abbott’s team has privately posed about West: “If you cannot perform your duty to make a ruling as Chair of the RPT [Republican Party of Texas], how in the hell do you expect to serve as Governor?”

Though West’s pugilistic style is new to Texas, Florida Republicans remember it well.

“He said all the right things about being a patriotic American and veteran. Then he would list 70 of his colleagues being communists,” LaMarca said, calling West a principled conservative who refused to stop making counterproductive remarks.

“Allen was making them every day,” LaMarca said. “I’m scratching my head, wondering why he would run against the incumbent governor Trump endorsed and who is committed to building the border wall. What puts him in position to beat that guy?”