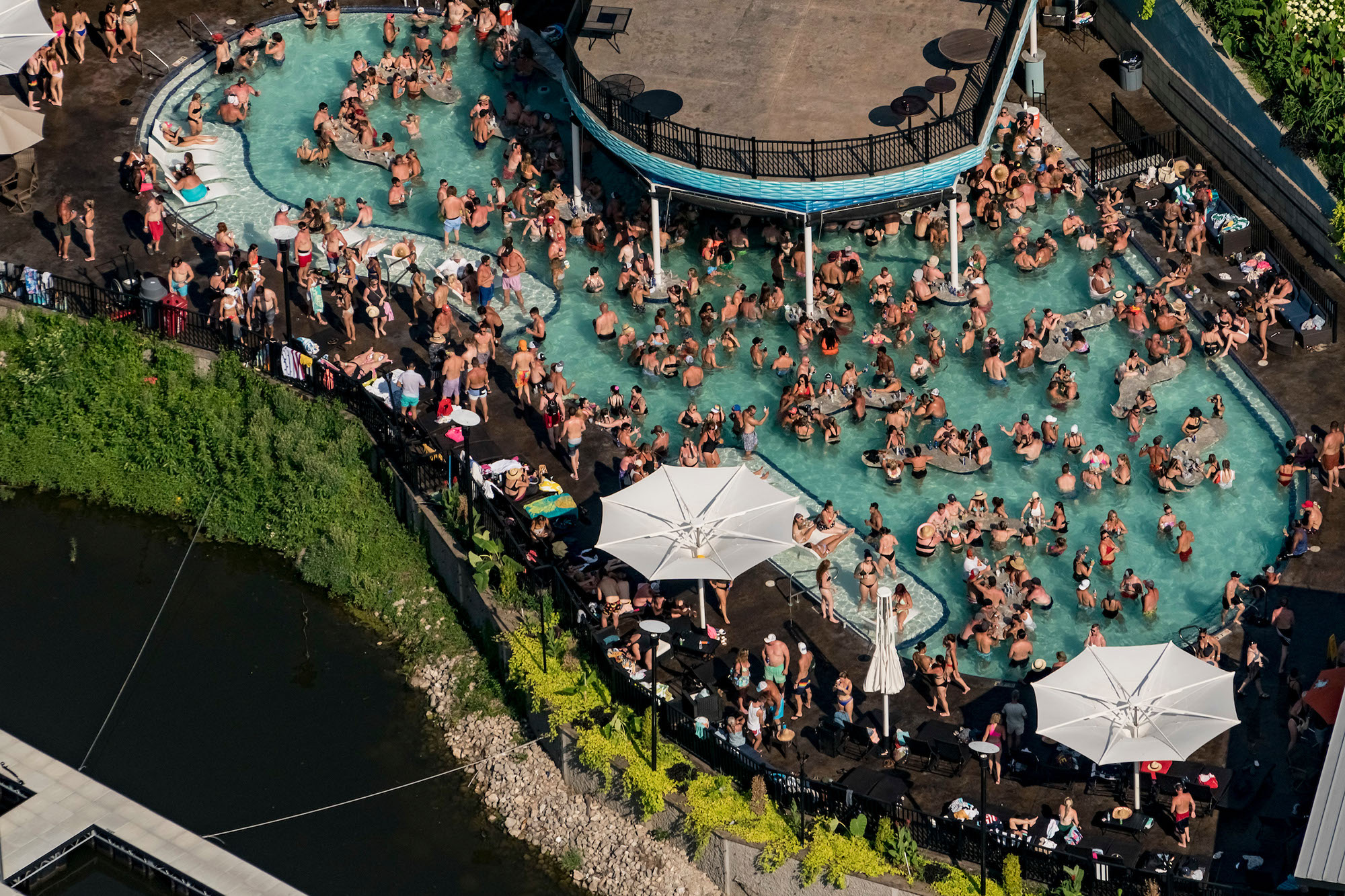 OSAGE BEACH, Mo.—The petite blonde bartender in ripped jean shorts bounced to each side of a square-shaped bar as women in bikinis and shirtless men lined up on a sweltering afternoon to order Bud Light, vodka and soda, and piles of nachos at this dockside retreat in the Lake of the Ozarks region.

In a county designated a Covid hot spot, in a state with one of the lowest vaccination rates in the nation, and in a region where hospitals are nearing capacity as the Delta variant takes hold, Erin, a bartender at Backwater Jack’s, couldn’t be in a more vulnerable position. She interacts closely with hundreds of maskless customers—sometimes on a single day. She knows most of them are probably not vaccinated. And she doesn’t care. She isn’t either.

“I’m living, breathing proof—I’ve not been sick once. I’ve been as hands-on as you can be with people from everywhere,” Erin said, as a motorboat thundered to the dock and another group of customers climbed out. Like others who spoke for this article, she asked to go only by her first name. She said she’d heard a rumor—common among vaccine skeptics but also plainly false—that “more people are dying from getting the vaccine this week.”

“Personally,” Erin added, “I feel like my immune system is doing a good job, so why pump it full of something that we don’t really know what it is?” 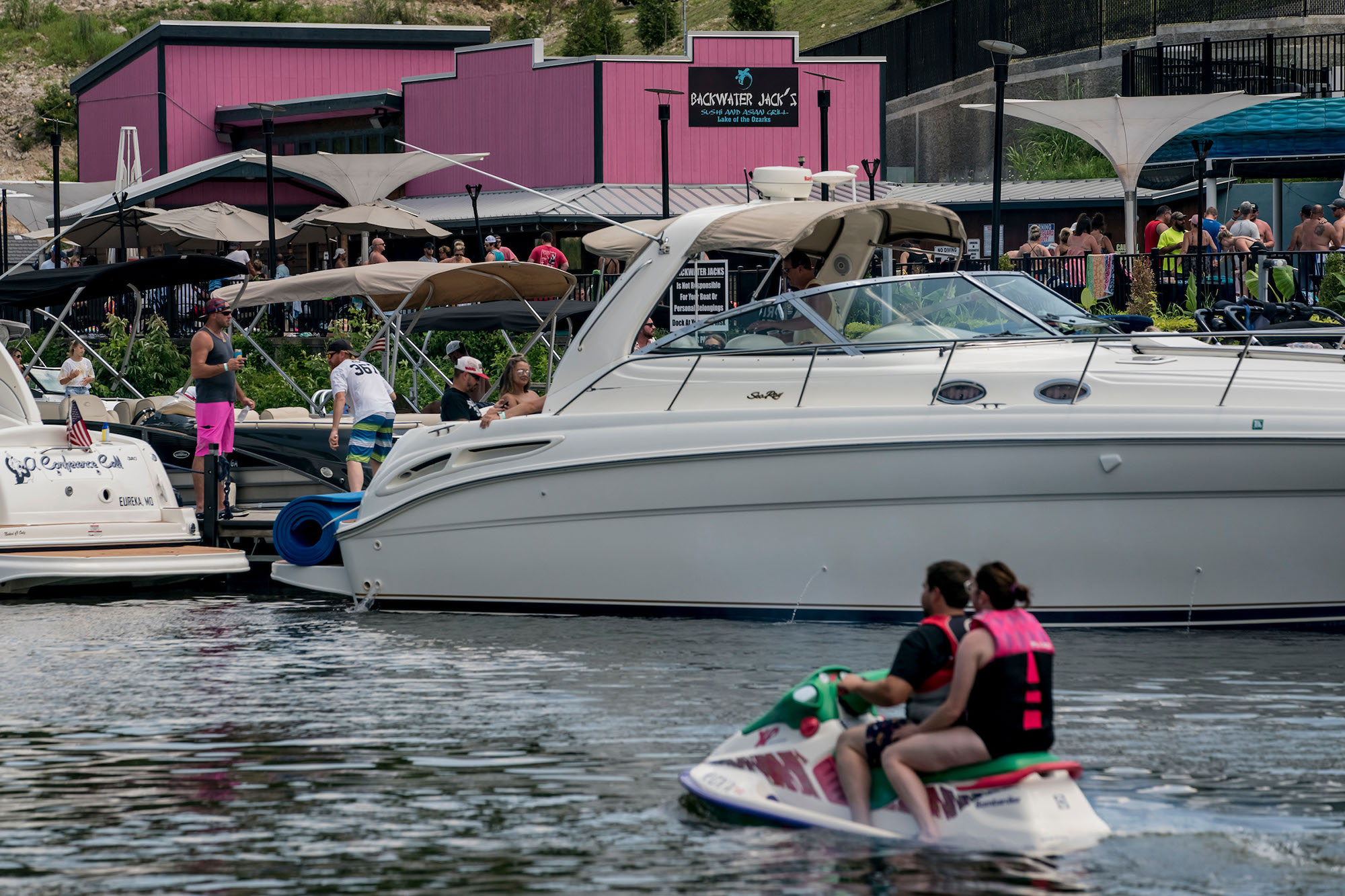 A year ago, Backwater Jack’s made national news after photos went viral of partiers packed inside the pool area, ignoring guidelines to avoid crowds and keep a distance from others. Today, as revelers laugh and toss back drinks in shallow pool water, some 600,000 deaths later, they aren’t just forgoing masks, they are forgoing the vaccine.

Talk of the vaccine draws scoffs, laughs and even cussing among the clientele. Mask-wearing, which is recommended for those not vaccinated, was virtually non-existent—and, in conversations with a flow of customers over two days, it’s clear that many are not vaccinated.

Depending on your politics, the scene at Backwater Jack’s is either a symbol of reckless abandon or unapologetic living in the face of a pandemic. It is one pole of the divide that has erupted across the country, which increasingly seems cloven into two Americas: vaxxed and unvaxxed. In the Lake of the Ozarks region, where Missourians and out-of-staters pour in to boat, fish, sunbathe and party, to be unvaxxed is a source of identity and—at times—pride, a totem of one’s independence and politics. 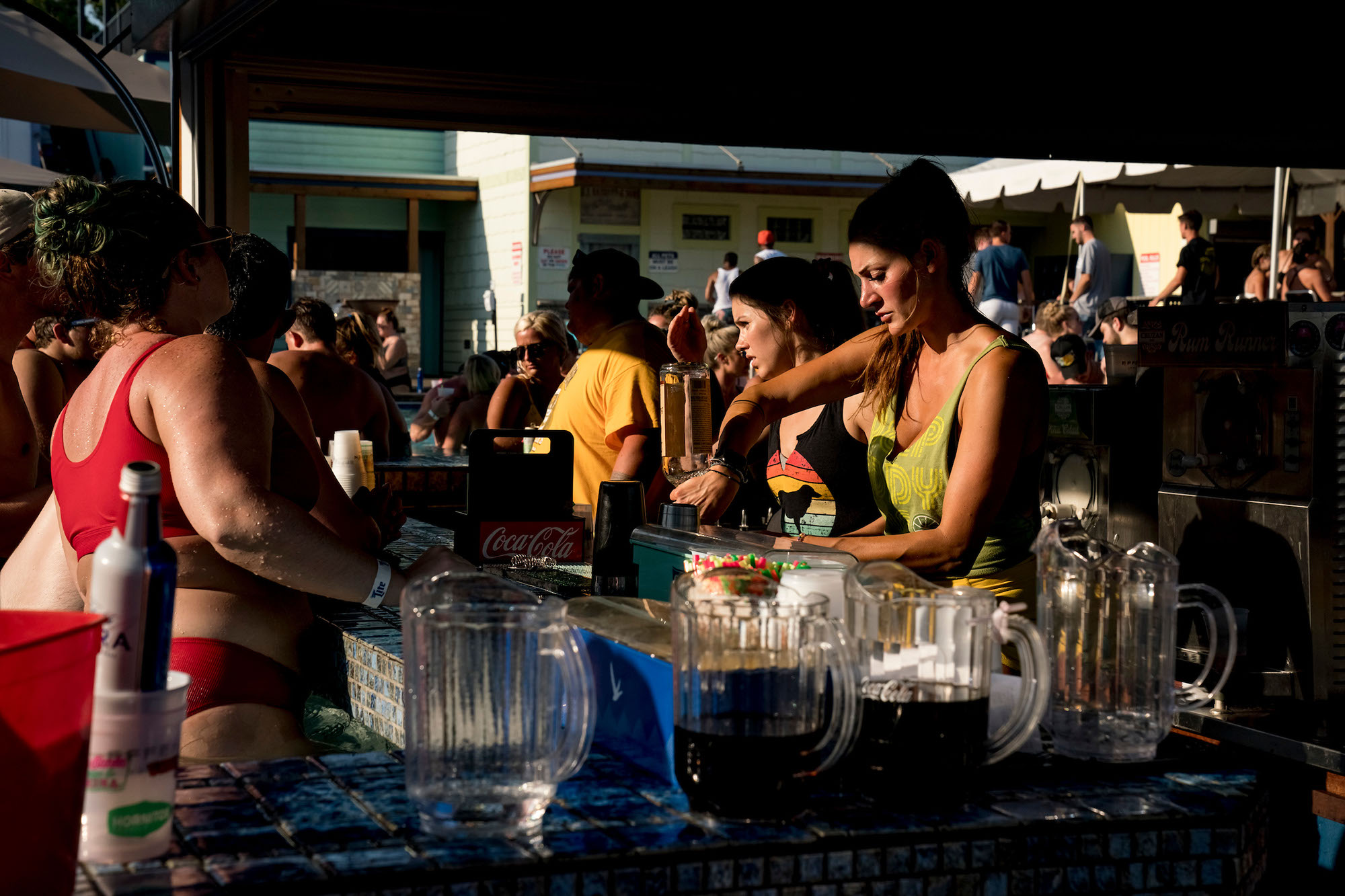 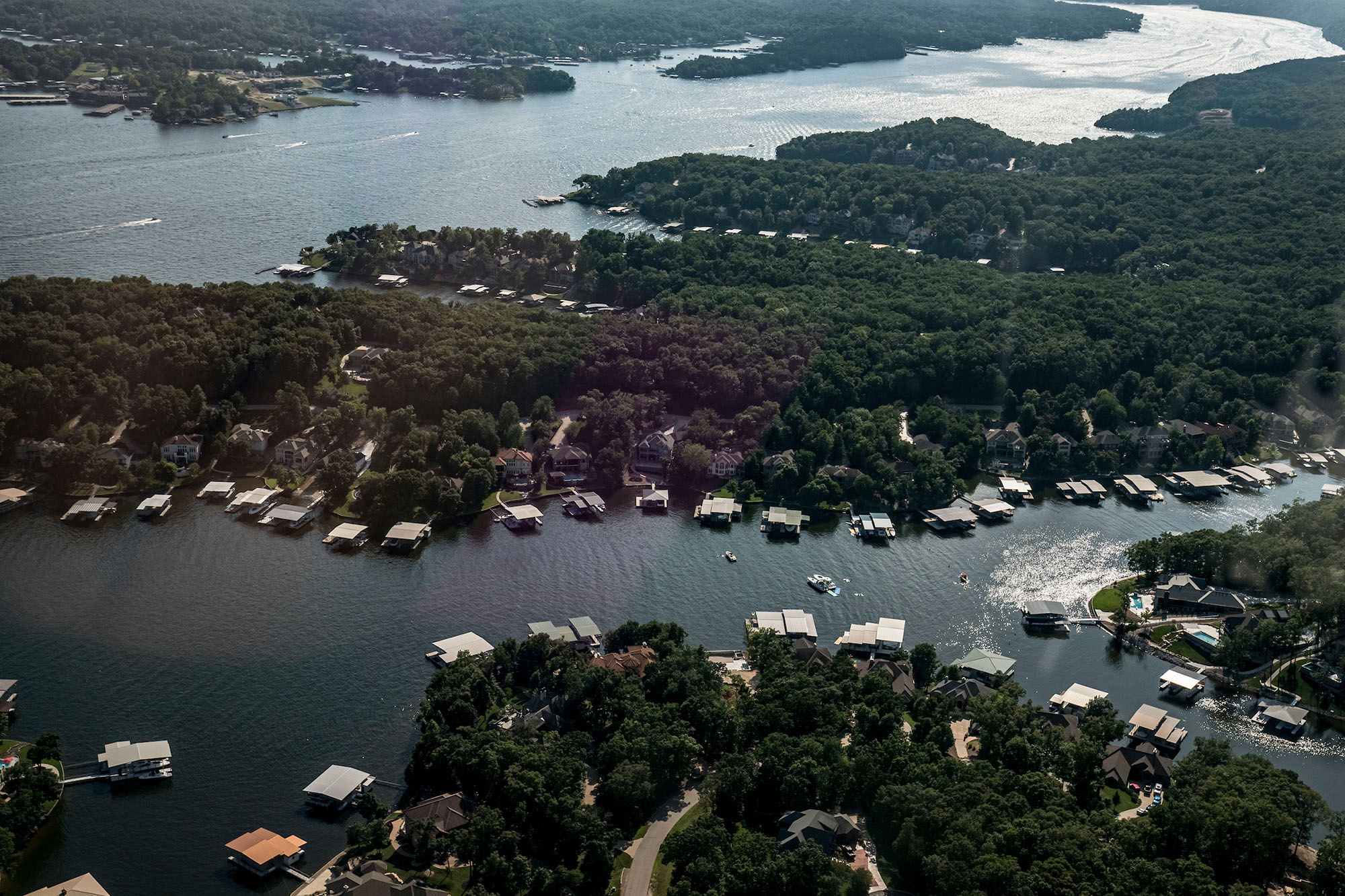 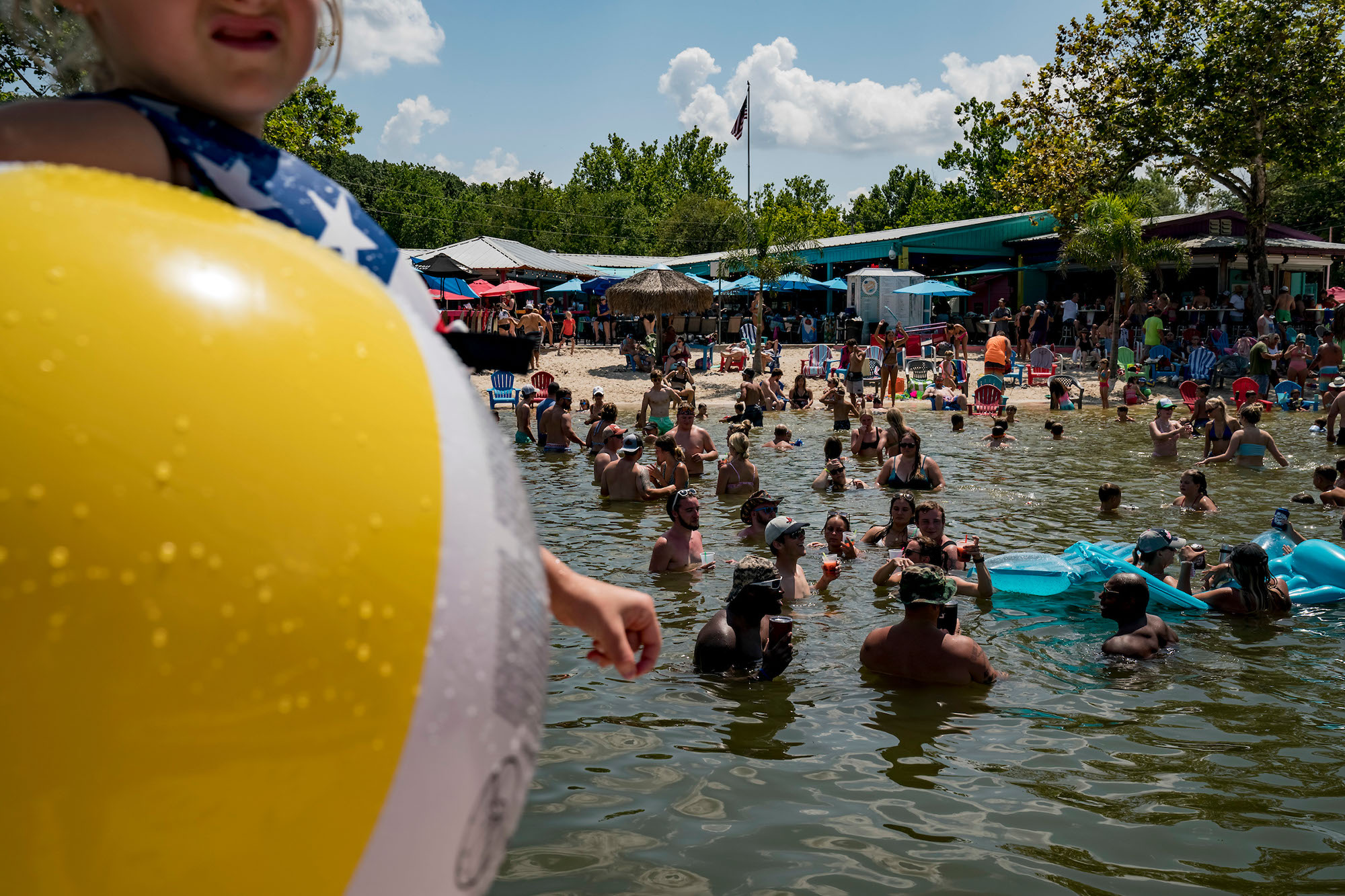 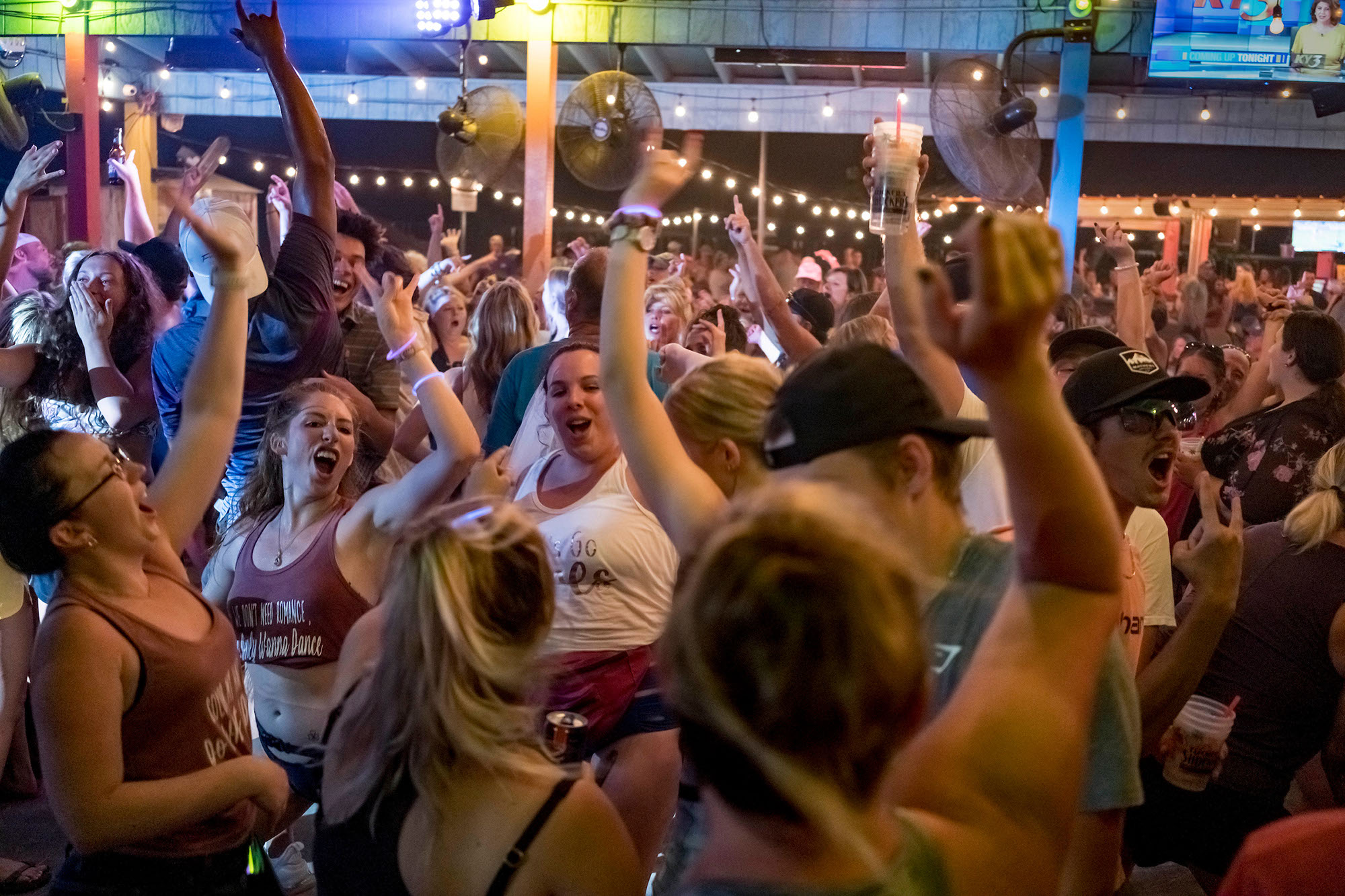 Interviews with dozens of the clientele frequenting dockside bars, restaurants and resorts in this area, famously featured in the Netflix dark drama “Ozark,” revealed an opposition to the vaccine campaign and a disbelief in news around the Delta variant so intense it bordered on belligerence. No promise, they say, would entice them to voluntarily get vaccinated, not a $1 million check, or a plea from a loved one, or the encouragement of Donald Trump himself.

Among the few who admitted to getting vaccinated, some described being shamed by friends or family.

One woman, Brittany Hanlon, who wears a mask while battling cancer, said she was heckled for doing so while walking through a Wal-Mart. “Take off your mask!” two women shouted at her as she tried shopping. The women told her, “that the mask was making them uncomfortable,” Hanlon recalled, “which I don’t understand. It’s not like I was doing anything mean or inappropriate, I just had a plain black mask on.” An employee at the Ha Ha Tonka State Park Visitors Center, in the Lake of the Ozarks area, Hanlon says she wears a mask while interacting with roughly 600-700 people a week there. She is typically greeted with sneers and requests that she remove it.

These moments—evidence of how social pressures can often pull people away from public safety measures—underscore the hurdles the Biden administration now faces as it battles a resurgence of the virus across the country.

The president has attempted to hold up his handling of the pandemic as a top political accomplishment. But those achievements increasingly seem at risk. Despite a full-scale push on the local level here, and widespread evidence that the unvaccinated are making up an overwhelming majority of those hospitalized or dying from Covid, the vaccination rate remains ominously low. Single shot vaccinations for adults in the three counties within the Lake of the Ozarks region—Camden, Miller and Morgan—stood at 46 percent, 35 percent and 42 percent, respectively, according to the Centers for Disease Control and Prevention. It is far from the 70 percent goal for adults that experts say is needed to achieve herd immunity. 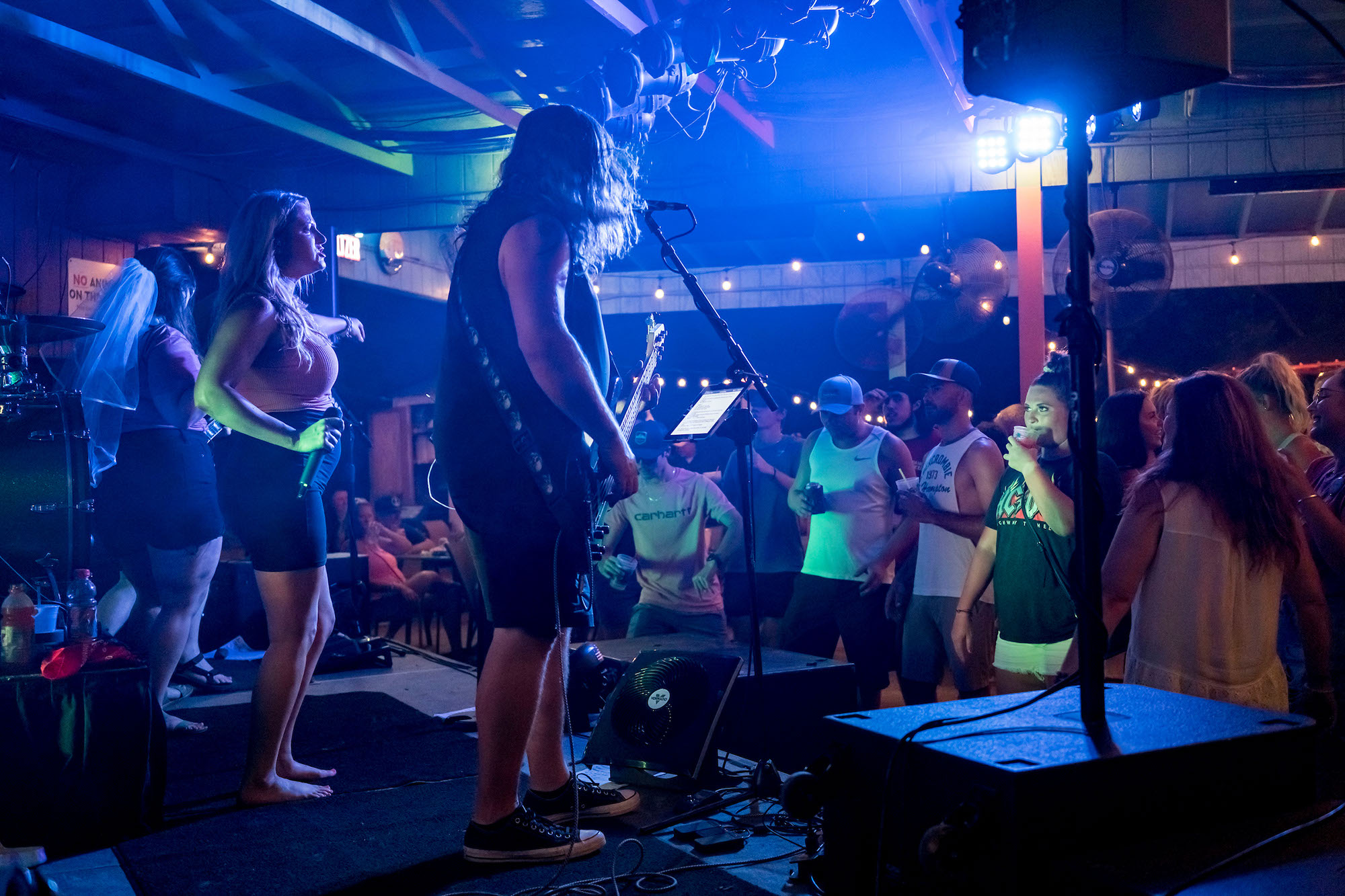 Those interviewed here had various reasons for not getting the vaccine. They felt overwhelmed by what they described as near-hysterical media coverage of the pandemic. They suspected greedy pharmaceutical companies were simply trying to line their pockets. Offers of money and incentives in exchange for the shot were met with even more skepticism.

“Now why would they be giving it away for free?” asked A. McNay, as he sat at Shorty Pants Lounge, another packed venue less than 15 minutes away from Backwater Jack’s. McNay asked that his full name not be used. Like many people here, he was suspicious of the government—and the media—and didn’t want too much of his personal information revealed. “If you think you can trust your government,” he said, “ask the Native Americans.” 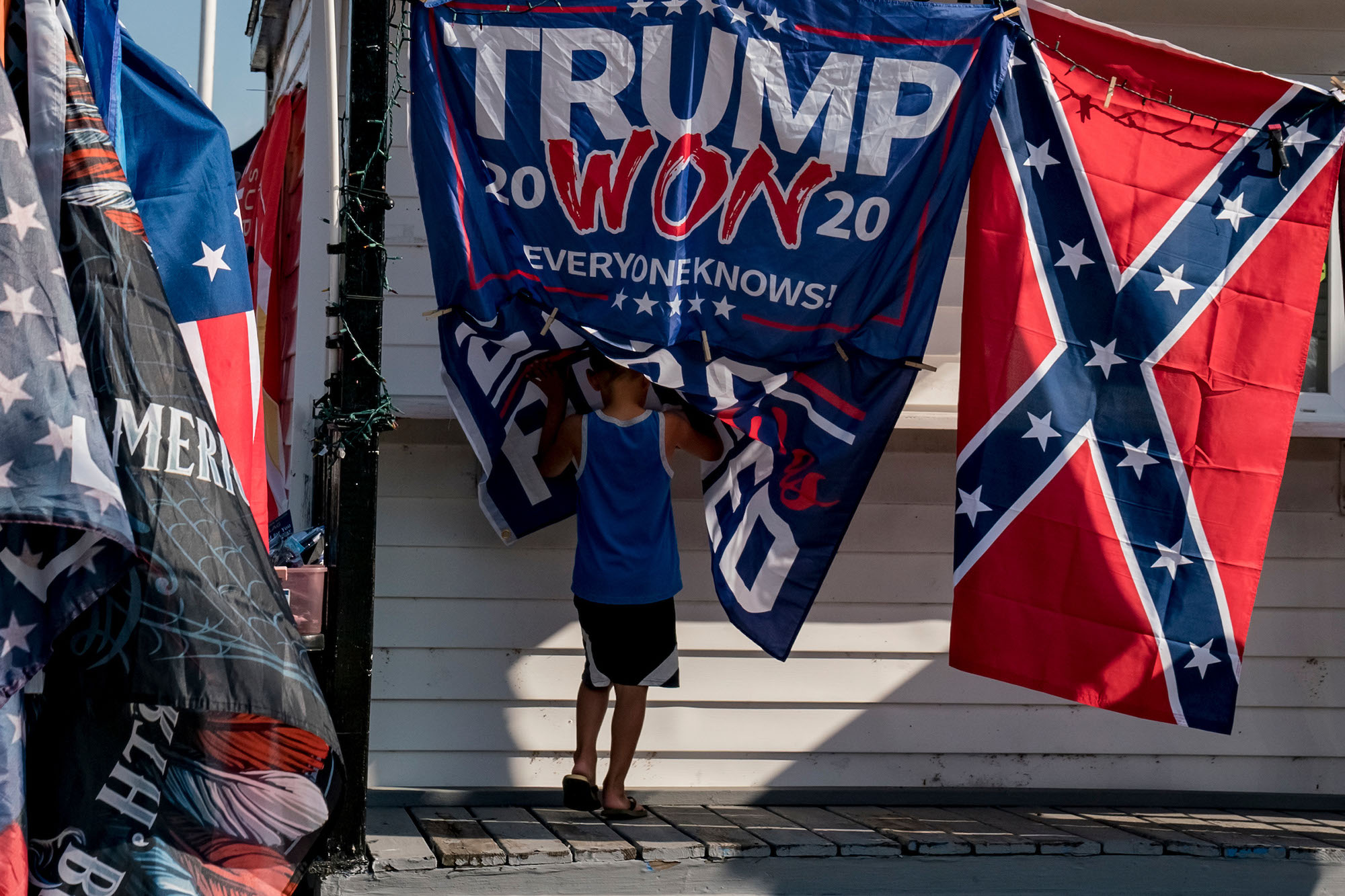 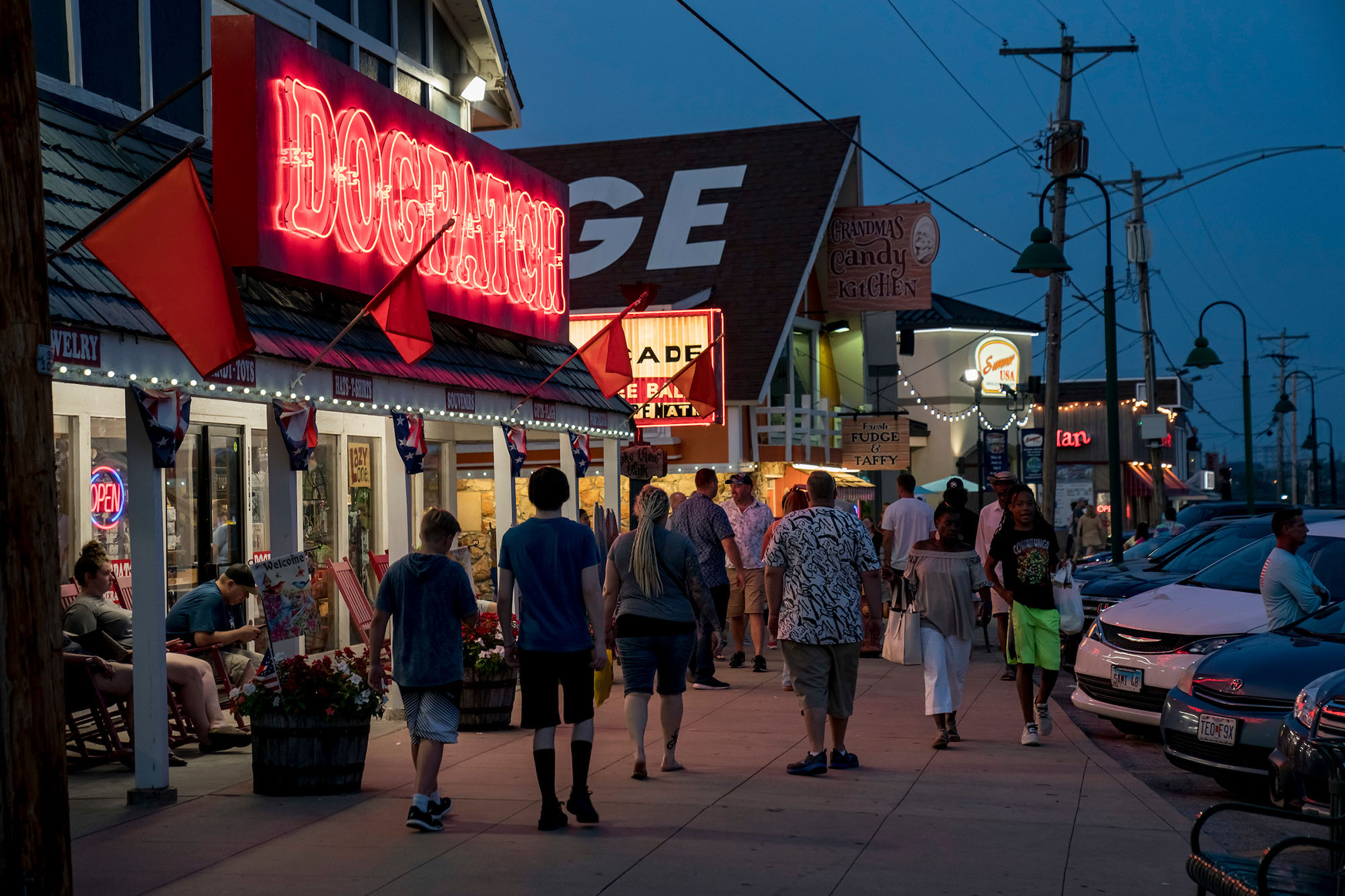 Known for its Cajun cuisine, Shorty Pants was brimming with customers on a recent weeknight. A live band took requests to the delight of dancing guests who twirled to Journey or played air guitar to AC/DC. A group of 12 sitting nearby celebrated birthdays by downing a round of shots.

Inside, McNay sat along with a half a dozen other customers who likewise lamented, what they viewed as, a breathless push for vaccines. Two bartenders floated in and out of the conversation, dropping comments like “what’s Covid?” to laughter. Just recently, a beloved cook at the restaurant had died from the virus, they said. But that hadn’t changed the thinking around vaccinations. The cook, they reasoned, likely had other underlying complications.

“We don’t know what else was wrong with him,” said Murry Ferris, who frequents Shorty Pants with his wife Jane. By contrast, Murray said, he and his wife exercise vigorously and regularly. Even so, Jane Ferris said the vaccine hadn’t been studied long enough and she didn’t want to be a “guinea pig.”

Like other places with low vaccination rates, there is a deep distrust of authority that exists among those at the Lake of the Ozarks. Politicians have agendas, the press loves controversy, even data can’t be believed. Some here cast hospitalization spikes as fictionalized. Others spin conspiracy theories about microchips.

“Now people are getting vaccinated and mysteriously you can take the average scanner and scan your arm,” Kenny Hubbard, a Backwater Jack’s customer says in a Southern drawl. He contends the virus was purposely released by the government as a form of “ethnic cleansing.” None of this is true.

Hubbard, a gregarious 57-year-old who is a regular here, pulls up a chair to the bar to explain that what’s “really happening will blow your mind.” As he talks, he wraps his arm around his wife, who is wearing a blue bikini, of which he frequently comments. The two had just spent the afternoon on their motorboat, tearing through the scenic waterways and coves that lure so many to this destination. Asked what proof he had of his claims, he clicked his tongue twice. “I can’t give away everything, baby.” 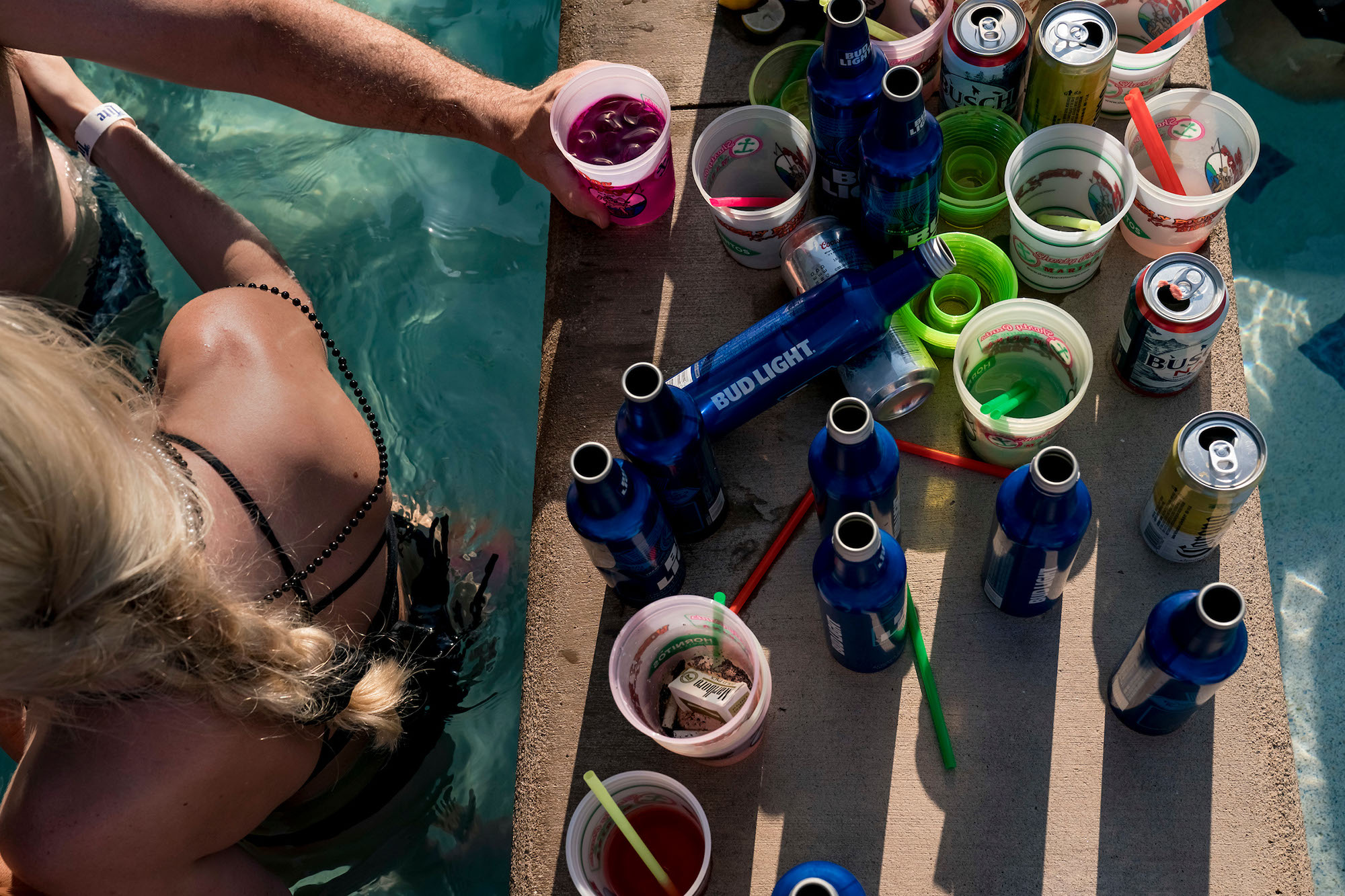 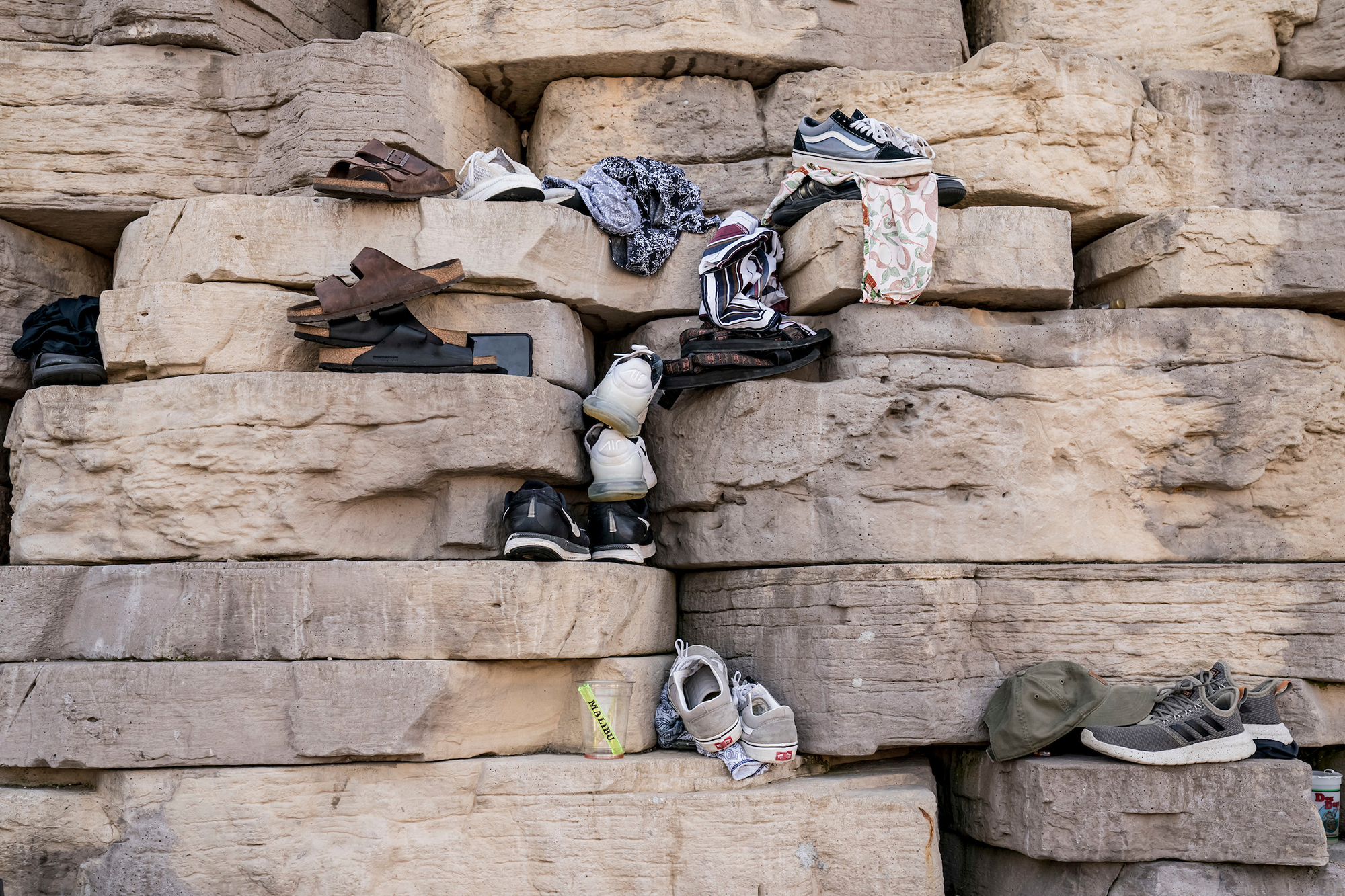 While conspiracy theories, misinformation, and paranoia may be playing catalyzing roles in discouraging vaccinations, it’s impossible to escape the reality that politics is too. In the current vaccine push, some people see an attempt to diminish the former president they love.

“I think the left is trying to extend the virus for political gain,” said Rick Shiman. Shiman did get the vaccine, in part because Donald Trump was behind developing it, he said. But he doesn’t necessarily think it’s needed.

“All this bullshit about people getting sick, look around,” he gestured over to the crowded pool, “See any masks here in Missour-ah? Not one. Is anybody getting sick? No. They’re full of shit on the left.” 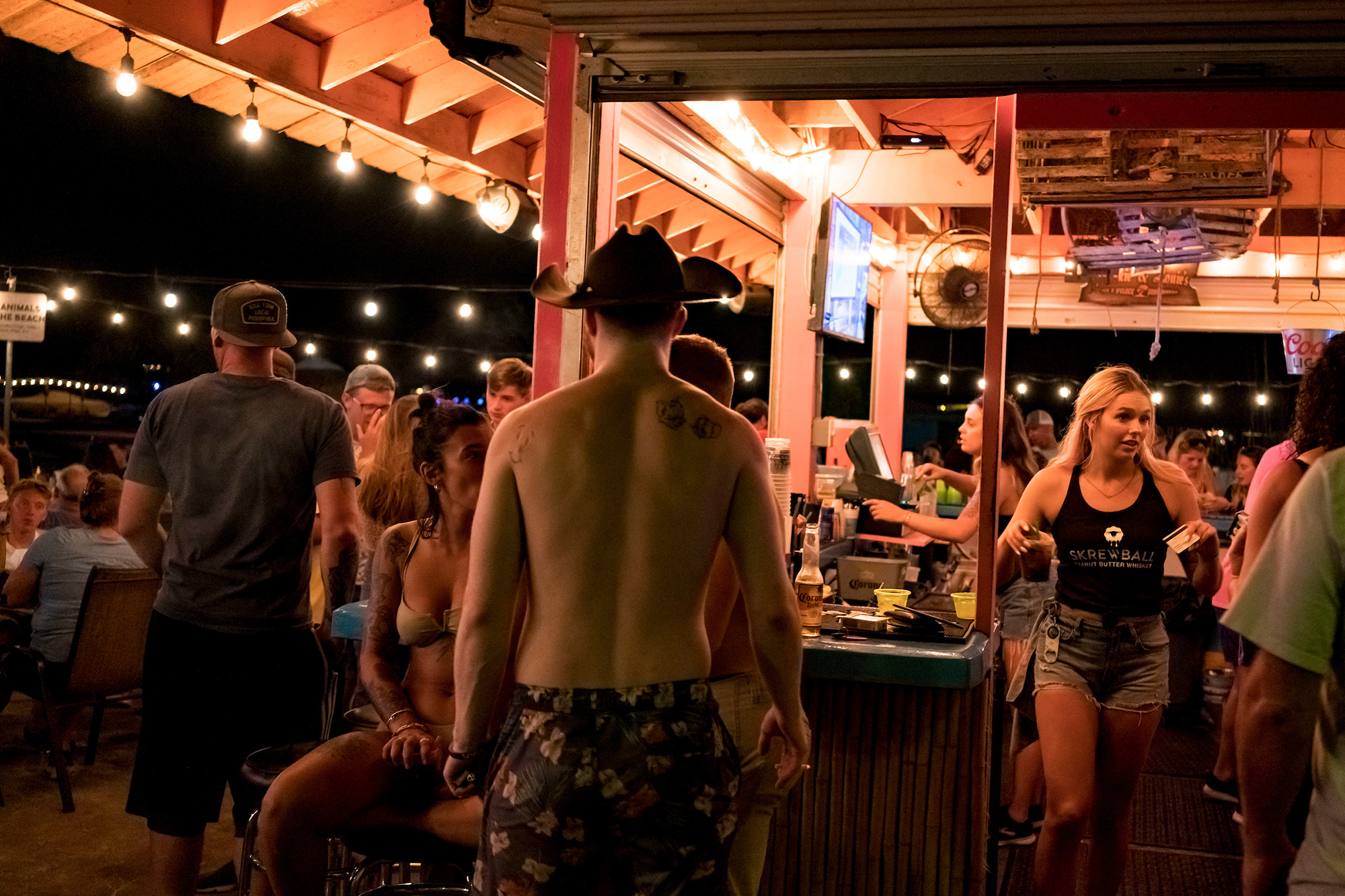 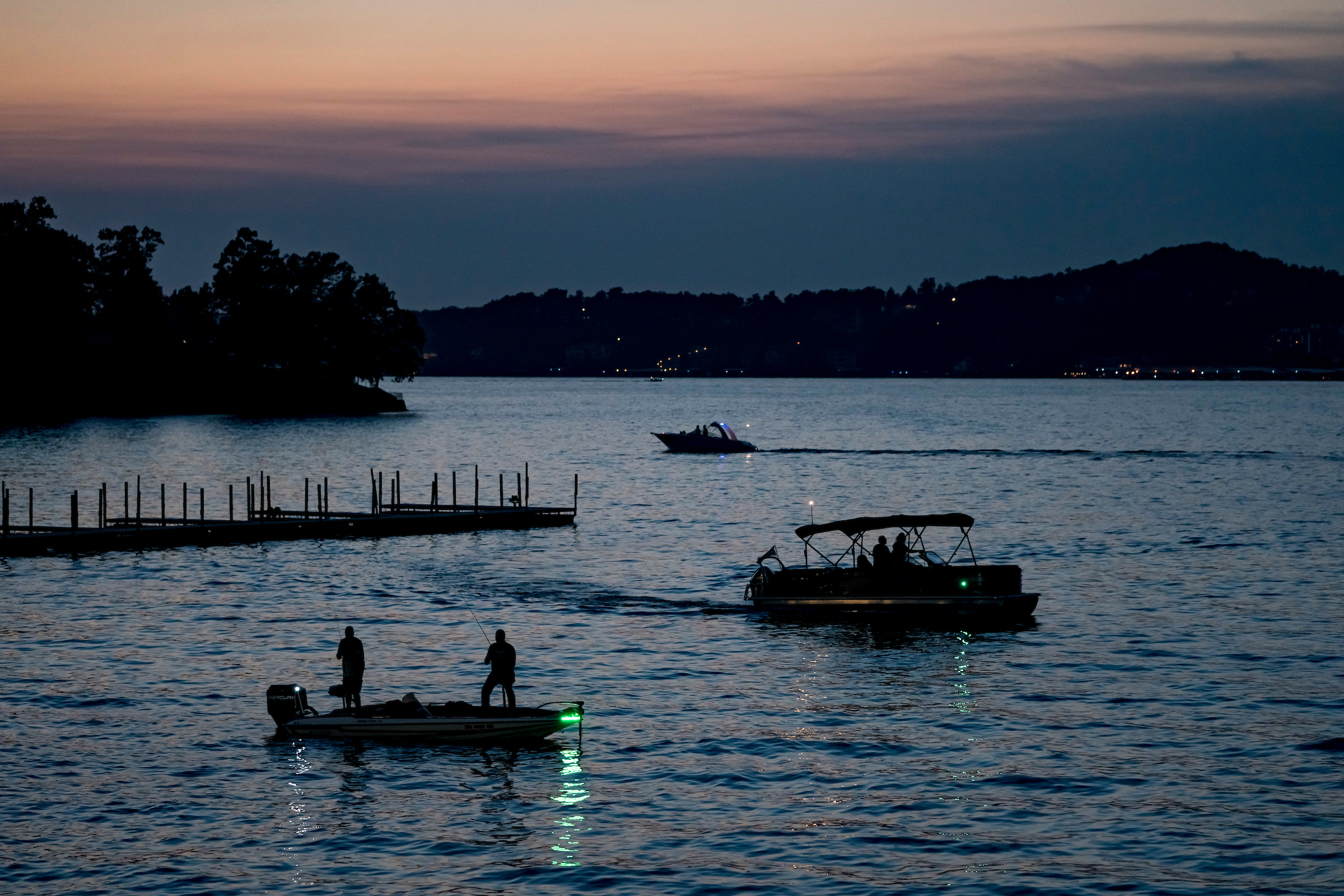 In fact, many people in Missouri are getting very sick, and they’re almost all unvaccinated. Less than 100 miles away from the Ozarks region, in Springfield, an all-hands on deck effort has been launched to fight the pandemic once more. Scraping for hospital workers to keep up with demand, state lawmakers have petitioned the governor to sign a waiver that will allow registered nurses to come in from other states. Coaches, faith leaders, firefighters and health workers are all begging local groups to get vaccinated.

That’s prompted the vaccination rate to creep up past 40 percent, not nearly enough to reach herd immunity, said Springfield’s mayor, Ken McClure. McClure said he’s had to get more frank with how he’s talking to residents. When a father told him his daughter hadn’t been vaccinated because she feared she wouldn’t be able to conceive, McClure responded, “she can’t conceive if she’s dead.”

“We’re hearing a lot of anecdotal stories of young people, no underlying health condition going in with no vaccination and they’re dead within a few days,” McClure said. “It’s going to spread statewide, we’re the tip of the spear.”

Missouri has seen an aggressive surge in Covid cases since early July, representing one of the largest outbreaks in the nation. Caseloads and hospitalizations returned to levels not seen since the thick of the pandemic last year. Over the last seven-day period, the state saw an average of 1,500 new Covid cases a day—the highest in six months—and an average of three deaths per day, according to the state’s health department.

In the past week, high-profile Republicans and conservatives have seemingly awakened to promoting the vaccine as cases explode. Alabama Gov. Kay Ivey, whose state saw a 400 percent increase in Covid vaccinations in recent weeks declared, “it’s time to start blaming the unvaccinated folks, not the regular folks. It’s the unvaccinated folks that are letting us down.” And Fox news’ Sean Hannity told viewers “I believe in the science of vaccination.”

The Biden administration is hopeful that conservative influencers can help convince those hardened against the vaccine to drop their opposition. But past attempts at persuasion haven’t fully worked.

The alternative is a more stick-heavy approach, which the White House has so far resisted. But there were indications from those interviewed that if they were deprived the ability to travel or work unless they got vaccinated first, they would indeed get a shot. In one case, Lindsey Simon, a server at Margaritaville resort, said she finally got her first shot because she feared she wouldn’t be able to get to a state fair in Springfield, Ill. where she has tickets to see a performance “on my bucket list”—the actor and comedian, Gabriel “Fluffy” Iglesias.

And yet, even if requiring vaccines is the lever the Biden administration ends up pulling, those who know Missouri say they don’t expect people’s behavior to suddenly change overnight. There are cultural elements at play here, after all, more powerful than mere acts of politics.

“The irony is it’s not the dumb rubes in Missouri who don’t understand the nature of this disease,” Gregg Keller, a longtime Republican consultant in Missouri. “Missourians understand this far better than these supposed medical experts we’ve been giving tens of millions of dollars every year.”