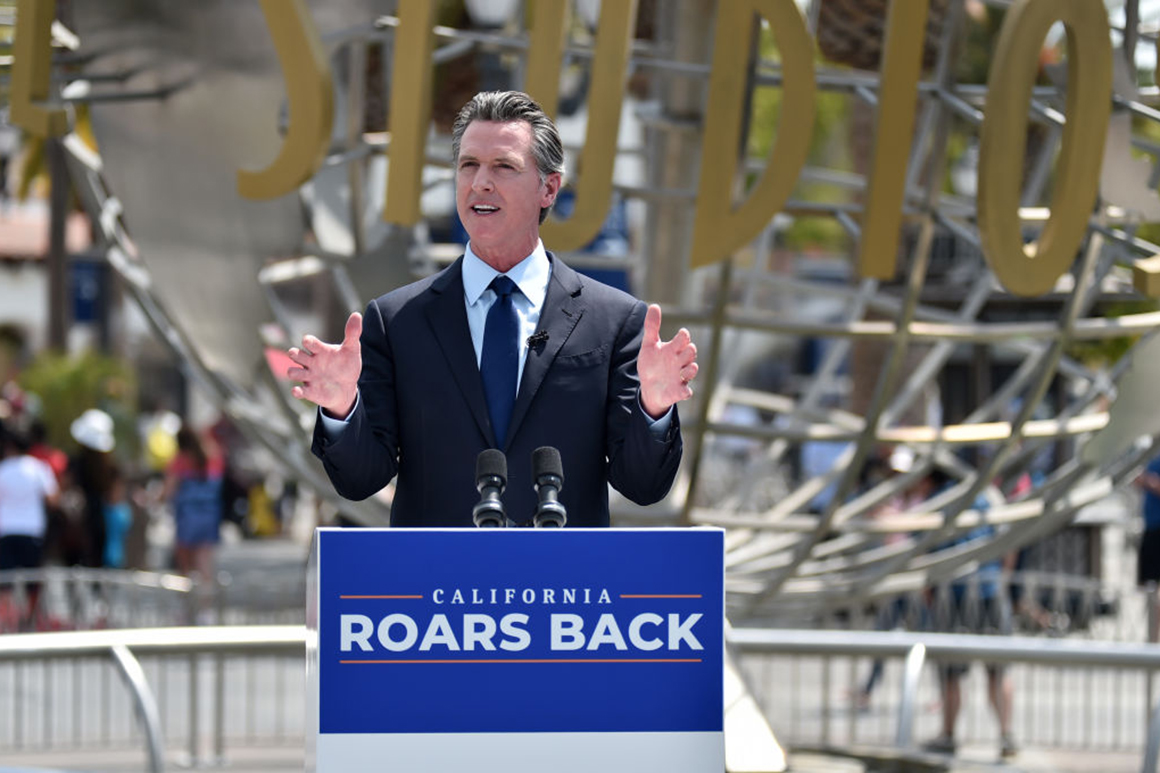 Republicans face long odds given a severe registration disadvantage and a brand still associated with former President Donald Trump, who remains deeply unpopular in this blue state. If they stand any chance, they need as many disgruntled voters as possible to remove Newsom.

To drive turnout, recall backers are encouraging any and all GOP entrants to join the race — especially those who can bring large followings. During an internal strategy session this week, recall proponents suggested that the high-profile candidates like reality TV show star Caitlyn Jenner and national talk show host Larry Elder could draw hundreds of thousands, perhaps even a million voters each, according to a person on the call who spoke on condition of anonymity.

Two other notable GOP candidates have joined the high-stakes political throwdown in recent days — Assemblymember Kevin Kiley and state tax board member Ted Gaines, both conservative Republicans with legislative experience who come from the same suburban area near Sacramento.

State GOP Chair Jessica Millan Patterson and two key recall organizers — fundraiser Anne Hyde Dunsmore, chair of the RescueCalifornia.org recall drive, and founder Tom Del Beccaro — have made no secret of their belief that a robust field of candidates will attract waves of energized voters for the Sept. 14 special election.

“You have these candidates from some of the largest cities in California pulling in constituents, you knit it all together and it makes a ‘yes’ vote very possible,” Del Beccaro said.

Newsom is in position to defend his office as California’s economy opens and voters remain opposed to the recall in public and private polls. But Dunsmore said in an interview that a bigger candidate field represents a better chance to oust the Democratic governor elected in a 2018 landslide.

While newcomers are piling into the race ahead of a Friday filing deadline, former San Diego Mayor Kevin Faulconer, 2018 GOP gubernatorial candidate John Cox, former Rep. Doug Ose and Jenner have been campaigning for months.

“The more people that get in the race, that make a serious attempt to get over 250,000 votes — and some of our candidates are going to be getting 2 and 3 million votes — you start adding all that up,” Dunsmore said. “We need to get to 6-1/2 million votes in order to get the ‘yes’ to pass on a 60 to 70 percent turnout model.”

The recall ballot features two questions, and Republicans need a majority of “yes” votes on the first one: “Do you think Gov. Gavin Newsom should be recalled?” The critical threshold represents an all-or-nothing cause for Republicans, since a failure on the first question means the second question — who should replace Newsom — would become moot.

But Democratic strategist Garry South called that strategy “delusional.” He was a longtime adviser to Gray Davis, who in 2003 became the only California governor to be recalled as voters replaced him with A-list movie star Arnold Schwarzenegger.

“We’ve seen this movie before,’’ South warned. “If you have a super-galvanizing candidate in the race like Arnold Schwarzenegger, that does change the equation, but this field doesn’t have an Arnold. It’s a bunch of Lilliputians.”

South also argues that the short time frame until the mid-September election means challengers have no time to match the large donations pouring into Newsom’s war chest, which is now beyond $27 million.

“None of these recall candidates are going to have two nickels together,’’ he said, “and the worst time to raise money is in the dog days of August.”

A flood of GOP candidates could also help drive the Newsom message that the recall is driven by Trump-aligned Republicans in a state where President Joe Biden beat Trump by nearly 30 percentage points last year.

“The reality is that they’re only attracting Republican support,” said Newsom campaign spokesperson Nathan Click. “And they can’t get past 40 percent support on the first question. That’s not going to do the job for them.”

Democrats say that the recall election will be unable to overcome the favorable political winds that have blown Newsom’s way in the past months. California’s infection rates plummeted this spring, and Newsom lifted most Covid-19 restrictions in mid-June. Many aspects of life, from family gatherings to sporting events and summer camps, are returning to normal. And California enjoyed a revenue windfall this year on the strength of its tech economy, allowing the governor to hand out $600 checks to two-thirds of state residents.

Besides that, Newsom is using the power of his pulpit like few governors before. He staged a massive rally Tuesday afternoon in Southern California built around his signing of a major budget bill, complete with rows of supporters and children behind him holding “California ROARS BACK” signs as he boasted about the state’s economy.

Some Republicans are skeptical that the hurdles can be overcome — no matter how many candidates jump in.

“I don’t know that more is necessarily bad because more messengers means more amplification” of the attacks against Newsom, said GOP strategist Rob Stutzman, an adviser to Schwarzenegger during the 2003 election. “But people aren’t going to engage in the recall because of the candidate. I think that just sounds backwards.”

He allows that “it’s entirely possible” that several thousand voters in the Los Angeles market may get fired up by the entry of Elder, whose core radio audience is in that region. “And maybe they weren’t going to vote in the recall, but now they are,” he said. But for the most part, “I don’t think any of these [Republican] candidates are driving voters to the polls.”

Still, Dunsmore cited public and internal polls showing that Republicans are nearly twice as energized as Democrats to vote in the recall and said the party is betting on passion to overcome its disadvantages.