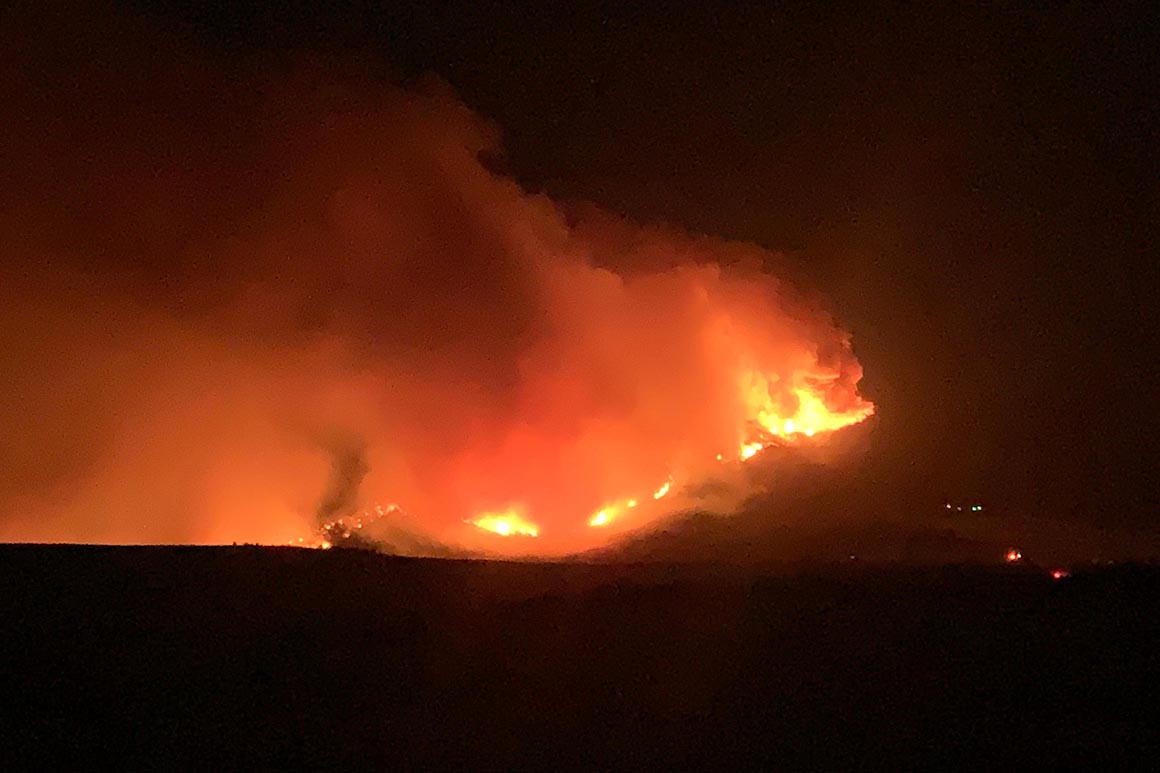 The U.S. may be facing its worst wildfire season in a century, and a new analysis of census, insurance and wildfire data show Latino residents in western states face the greatest danger.

That threat to Latinos has grown in the past decade, and they are twice as likely to live in areas most threatened by wildfires relative to the overall U.S. population, according to data compiled by climate services firm risQ, which analyzes financial sector climate risk. The Latino population makes up about 18 percent of the U.S. but represents 37 percent of the people who live in the areas that risQ identified as facing the most extreme wildfire risks.

White residents, meanwhile, have less exposure than their share of the national population — and their vulnerability actually has fallen in the last decade.

The danger Latinos face from wildfires is the latest evidence to show the disproportionate threats that communities of color and of low-income face from climate change. The combination of the shortage of affordable housing and Latino population growth has pushed people with fickle finances deeper into remote locations that are more susceptible to fires, according to experts who have studied the Latino community and settlement trends in the U.S.

The devastating wildfire season is being worsened in the West by the most severe drought in a hundred years and heat waves that have shattered records across the Northwest. The heightened risk has prompted officials to reassess land-use planning, forest management, emergency outreach efforts, housing and climate policies.

“We already see wildfire risks that are soaring out West, and if it’s anything like last year we’re talking not just about significant billions of dollars,” White House National Climate Adviser Gina McCarthy said last week, noting the deaths, asthma and other long-term health effects caused by the blazes, smoke and toxins they release.

So far this year, more than 30,000 fires have burned nearly 1.5 million acres, according to the National Interagency Fire Center. The U.S. Drought Monitor says most of the Western U.S. is experiencing moderate to exceptional drought, drying out vegetation that provides fuel for those fires. More acres have burned this year than through the same period as 2020, when 17,904 structures burned, 54 percent of which were homes.

“2020 was a pretty intense wildfire season, and the earliness of some of the wildfires we’re seeing this year is making me a little nervous,” said Jennifer Balch, a fire scientist at the University of Colorado. “We need to get ready.”

Ballooning housing costs are a primary reason for Latino residents moving into areas facing high wildfire risks, according to risQ.

risQ’s model assigned scores of 0 to 5 for counties, Census tracts, states and school districts across the U.S. based on the probability, severity and expected property losses from wildfires. Those given a score of 3 or higher represented the 12 percent of counties that met or exceeded a “high risk” designation — and which accounted for $46 billion in insured losses between between 1990 and 2020.

According to the risQ data, the Latino population in areas receiving a score of 5 for the highest wildfire risk jumped by 223 percent between 2010 and 2019 compared to areas with no wildfire risk, indicating that Latinos were moving to the areas that were the most threatened, while the white population in those areas fell by 32 percent. For areas assigned scores of 3 or 4, denoting high and extreme risk, the median Latino population rose by 37 and 87 percent, respectively, over that period, while the white population fell by 27 and 12 percent.

No statistically significant changes were observed for Black, Asian American and Indigenous populations.

The findings did not surprise Rep. Tony Cárdenas. In his previous career as a Los Angeles-area real estate broker, the California Democrat said his majority-Latino clientele often picked housing “bargains” in wildfire-prone areas because they didn’t have the financial means to settle in a safer location.

“A lot of the people who are the hardest working people in town actually work in restaurants, they work in industry, they work in places where the work is really hard. And you’re basically the minimum wage sector,” Cárdenas said. “They’re going to where they can afford. And unfortunately, those are some of the factors that drive them to live in those communities, in those households, and then they’re more subject to being a victim of a fire.”

Demographers said many Latino residents who moved to rural agricultural areas for farm work or to wealthy ski or outdoor recreation towns for service industry jobs settle in the hinterlands where land is cheaper — and services like firefighting are less accessible.

McCarthy said the Biden administration is aware of the disproportionate effect climate change has on communities of color and would be working on “opportunities to advance response to wildfires so they’re not as extensive.”

And so-called “natural amenity” communities built around winter sports, resorts and second homes began attracting Latino residents in the early 2000s to work service industry jobs that supported those burgeoning towns, said Richelle Winkler, a sociology and demography professor at Michigan Technological University who has studied migration, residential segregation and the environment. But Latino residents tended to settle in less expensive, wildfire-prone rural areas far from those towns — and from firefighters.

“Affordable housing programs are the No. 1 thing we need to work on,” she said. “It’s the root of all environmental justice issues, really, but very specifically in this case.”

People working in landscaping, housekeeping and other industries serving the Western Colorado resort towns of the Roaring Fork, Colorado River and Eagle valleys often live in high-risk areas between two and three hours from their jobs due to lack of affordable housing, said Beatriz Soto, director of public lands advocacy group Defiende Nuestra Tierra at the Carbondale, Colo.-based group Wilderness Workshop. Many reside in mobile home parks without access to clean water and rely on electric heaters, which pose significant fire hazards.

Soto said local officials and voters in wealthy towns like Aspen and Snowmass have resisted pressure to build affordable housing. “They don’t want the person who cleans their home to be their neighbor.”

Overall, more houses are being built in unoccupied land abutting forests and woodlands, known as the wildland-urban interface, to accommodate the growing population. About 46 million homes are located in these areas, which is growing at a pace of 2 million acres per year, according to the U.S. Fire Administration. That housing boom represents a 49.4 percent increase from 30.8 million in 1990. That has put people and property at greater risk while boosting wildfire probability: Humans start 87 percent of them, according to the National Interagency Fire Center.

But the threat posed by wildfires has not deterred construction: risQ found U.S. single family home permits in the top quartile of wildfire-prone counties accounted for 37 percent of all permits in 2019, up from 30 percent in 2010.

“People know the risk, and that’s been a little bit of a wake-up call to ecologists like myself,” said Volker Radeloff, a fire ecologist at the University of Wisconsin-Madison.

risQ’s analysis showed economic costs of wildfires are already significant. Losses for single family homes hit $13 billion annually under current climate conditions and are likely to climb to $14 billion a year by 2050 if greenhouse gas emissions continue unchecked. But losses held constant in a scenario with half as much warming as the worst-case forecast, which risQ CEO Evan Kodra said showed “a clear trade-off” for reducing emissions.

Climate change is also drying out wetter areas like dense Pacific Northwest forests, said Erin Hanan, a fire ecologist at the University of Nevada-Reno. Warmer, arid conditions are melting the mountain snowpack earlier, shortening the period of time in the spring that those waters flow through the region. That means trees that rely on those flows dry faster in hotter temperatures, creating fuel for ignition.

“People are getting it in their head that people are trying to live within the [wildland-urban interface], but that is not always the case,” she said. “A lot of it isn’t a choice.”

Climate change is also rapidly accelerating, strengthening and expanding wildfires into new areas previously untouched by the threat. A new challenge involves figuring out where people are moving and whether the infernos’ reach will extend there, too.

“We don’t actually have a good handle right now for vulnerable populations in terms of where they live relative to wildfires,” said the University of Colorado’s Balch. “The science has to catch up in the fire space.”