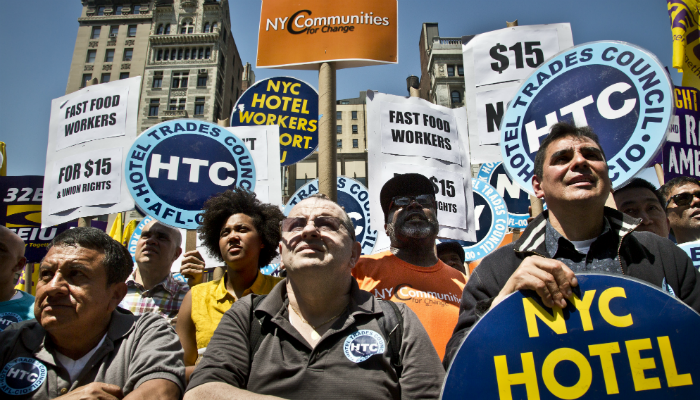 WASHINGTON — Wages are rising, employers are giving hiring bonuses and more Americans are quitting their jobs, sparking hopes from the White House on down that the workers who were hit hardest by the pandemic are finally being empowered.

Even labor advocates, however, say that newfound leverage is unlikely to last.

The country’s rapid reopening has created a unique economic environment where the demand for workers is rising faster than the supply, giving greater clout to lower-wage employees whose help is needed as Americans flock back to restaurants and retail stores.

But without significant structural changes — including legislation aimed at increasing workers’ bargaining power — the labor market will return to normal in a matter of months, handing the balance of power back to employers where it has been trending for decades, economists and worker advocates say. The flurry of bonuses is likely to be short-lived, and wage hikes might not have lasting benefits for the next round of hires.

“I think the gains of workers will be evanescent,” said Rep. Andy Levin (D-Mich.), a former labor organizer and a strong voice in Congress for workers. “They will not last.”

“For it to be durable,” he said, “they’re going to have to regain the freedom to form unions and bargain collectively.”

For President Joe Biden, who on Friday welcomed the idea that employers are “competing with each other to attract workers,” a backslide in labor power could undercut his signature pledge to elevate pay, which has been boosted in recent months as employers scramble to staff up.

Biden has also promised to “provide workers with the choice to join a union and bargain collectively with their employers,” a goal that seems out of reach in a closely divided Congress as he struggles to pass multitrillion-dollar infrastructure legislation.

One reason for skepticism is that rising wages — the most measurable sign of workers’ new power — have recently been largely centered in high-turnover industries like leisure and hospitality.

While average hourly earnings for all non-supervisory employees rose 0.9 percent over the past two months, they climbed 3.5 percent for workers in leisure and hospitality, who were among the hardest hit by the pandemic lockdowns, Labor Department data released Friday shows. Turnover in that industry is nearly double the average annual rate.

“There have been wage raises, but they’re one-off wage raises,” said Claudia Sahm, a former Federal Reserve economist now with the Jain Family Institute. “And these are in industries that have a massive amount of turnover. So you don’t have to hire them back in at the higher wage, and you certainly don’t have to give another wage rate bump next year.”

Economists expect the labor market to stabilize by the fall, when enhanced federal job benefits in all states are set to end and after schools reopen, easing pressure on parents who have stayed home to take care of their kids. By then, too, the long-term unemployed will have had more time to ease back into the labor market and find a job that fits, and fears of the virus may have faded further.

That’s expected to trigger a rush back to work for millions of unemployed Americans — at which point businesses will no longer be forced to compete for staff.

A lot of employers are “hoping to limp through the next couple of months and not bake in these higher labor costs, expecting that it’s going to be easier in the fall once schools reopen,” said Aaron Sojourner, who worked at the Council of Economic Advisers in the Obama administration.

“Will workers be able to hang onto the gains they’re able to create right now? I don’t know,” Sojourner, a labor economist who’s now an associate professor at the University of Minnesota, said. “Employers have a lot of ways to claw back value from workers.”

For now, at least, economic data makes clear that workers have been benefiting from the move back to normalcy. Wages and salaries in private industry rose 3 percent year-over-year in the first quarter, and the annualized growth rate was about the strongest it has been since the early 1990s, according to the Employment Cost Index. That’s a data set from the Bureau of Labor Statistics that controls for differences across industry and occupation.

Small businesses have been doling out raises at the same rate they typically do during the year-end rush in December, according to data from the payroll processor Gusto, which also found the size of bonuses on average nearly doubled from early 2019 to early 2021.

And beyond pay, workers also appear empowered to search for new jobs. The rate of workers leaving their jobs reached an all-time high in May of 2.7 percent — an indication of employees seeing the increased demand for their help and taking the opportunity to find something new.

But economists and labor advocates say the fact that workers have the upper hand now will mean little long-term.

“It’s adjustment,” Sojourner said. “It’s not a change in the long run.”

Sahm said there could be reason for optimism if policymakers are able to capitalize on the current environment to push through policies like a $15 minimum wage that failed in Congress earlier this year. While the chances the bill could pass remain dim, some major companies like Chipotle have raised their starting wage to $15 anyway to attract workers.

“If you were going to push this through, not only are these policies popular with workers, we have real-world proof right now that it can be done,” Sahm said. “If they would seize the moment and build on it, that’s how you get lasting change.”

Beyond raising the minimum wage, Biden has also called on Congress to pass the Protecting the Right to Organize Act, legislation that would make it easier for workers to form unions, including by expanding collective bargaining rights to independent contractors.

The PRO Act, which the president included in his sweeping American Jobs Plan, has been a priority for unions and Democratic leadership for years, and the House passed it in March. But the labor-backed legislation is unlikely to make it through the Senate, where it would need 60 votes, and where even some Democrats have declined to sign on in support.

Still, some labor leaders are hoping the current environment will encourage more organization among workers, who are worn out by the coronavirus pandemic and unwilling to return to work at the same wages and under the same conditions as before the shutdowns. Their hope is that non-unionized workers will band together to maintain pressure on employers over the long term.

By not flooding back to jobs right now, “workers are absolutely talking with their feet,” said D. Taylor, who represents 300,000 workers across the U.S. and Canada in hotel, food service and other frontline industries as president of Unite Here. “They’re saying, ‘I’m not going to work in poverty any longer.’”

But even Taylor said that while workers have some leverage on wages at the moment, their power is limited: They have no ability to ask for more in terms of health care or retirement benefits, for example, or how many hours they’re assigned each week.

“It’s a clarion call to the labor movement to organize,” Taylor said. “We need to put an enormous amount of resources to start organizing again, all the unions, in order to change the economic balance of power in this country. Until we do that, it’s only going to get worse.”