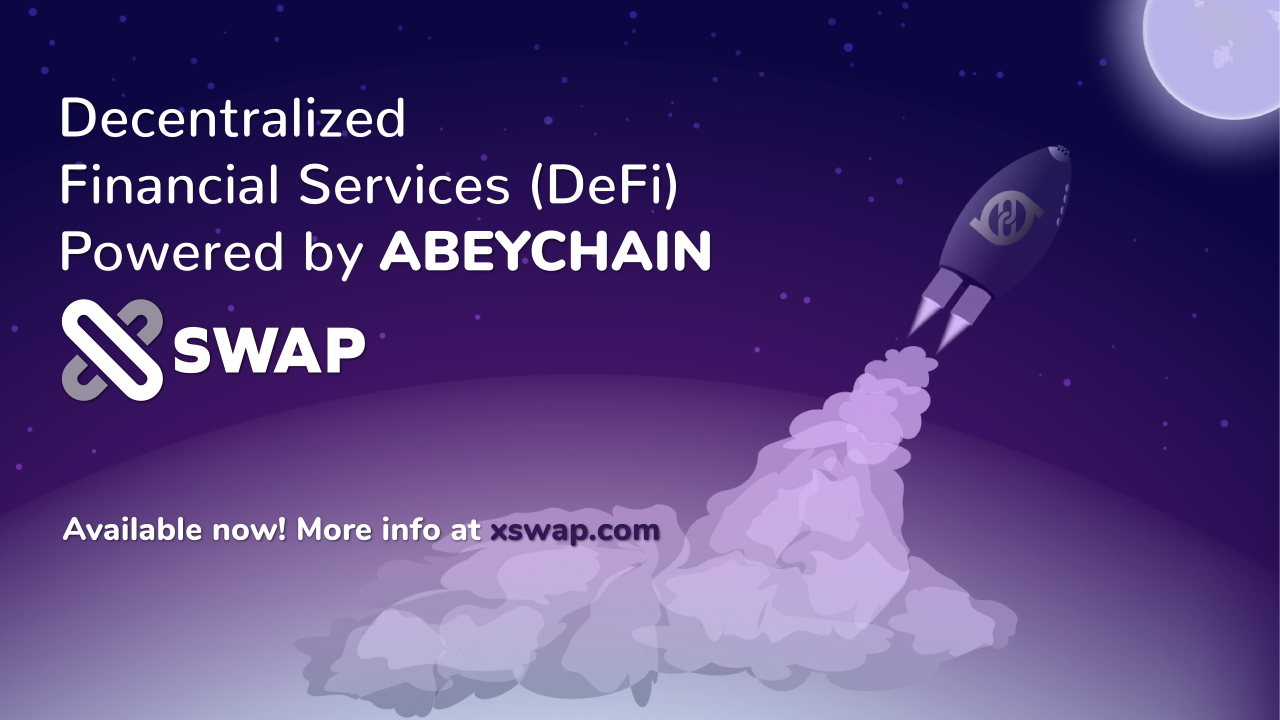 ABEY Foundation, the organization that oversees the activities of multi-layer blockchain protocol ABEYCHAIN has revealed the launch of XSWAP: its native decentralized exchange. This development is expected to herald the beginning of innovations with the ABEYCHAIN DeFi ecosystem.

XSWAP is built on ABEYCHAIN infrastructure that is designed to be highly scalable and support up to 10,000 TPS. These qualities mean that the DEX will be able to handle greater amounts of transactions as adoption increases.

XSWAP differs from traditional DEXes as it introduces a unique trading concept based on an automated liquidity protocol and an automated market maker system. In addition, XSWAP has no central intermediary making the DEX completely decentralized and permissionless.

The DEX solves the problem of liquidity faced by centralized cryptocurrencies with its automated liquidity protocol trading model. As a result, liquidity providers are incentivized to stake their capital within supported liquidity pools.

Individual tokens listed on XSWAP are provided with respective pools where LPs can stake their digital assets for rewards. XSWAP liquidity pools offer some of the best Annual Percentage Yield (APY). These rewards are paid out to liquidity providers in the form of XSWAP native token XT or in the form of other tokens based on the user’s preference.

XSWAP also makes trading easy with its automated liquidity protocol. A buyer or seller no longer needs to wait for an opposite party to complete trades.

The entire liquidity pool is designed to be algorithmically defined. Thus traders can execute trades instantly as long as there is sufficient liquidity in the pool to complete the trade.

Another key feature of XSWAP is the introduction of the automated market maker system that provides accurate prices for tokens listed on the platform. This system ensures that the price of the market is at the best price based on supply and demand.

A token value increases or decreases based on the amount of coins deposited in their respective pools. The individual price of the token is determined by a mathematical algorithm that has been embedded within the XSWAP protocol.

XSWAP is designed to be user-friendly, and anyone can access its products by connecting a supported wallet like MetaMask or ABEY 2.0 Wallet. Once the wallet is connected, users can place transactions and swap tokens on the DEX. It should be noted that gas fee is relatively low and paid using the native ABEY token.

In addition, traders can change the type of transaction speed by paying a little more for faster transactions. The extra fee serves as an incentive for miners to validate their transactions quicker.

XSWAP has a native governance token called XT. A total supply of 1.2 billion XT tokens will be distributed to users as rewards to Liquidity providers that stake tokens on supported pools. In addition, XT provides holders voting rights on new developments and changes to the DEX. Some of which include the distribution of the tokens and future changes to the fee structure.

XT token will initially be traded on XSWAP and will be listed on more DEXes in the future. ABEYCHAIN has already completed the first airdrop of XT on August 17, 2021 in just four hours, and will conduct more airdrops in the coming weeks.

ABEYCHAIN is a third-generation blockchain protocol that combines decentralization, security, and scalability via its hybrid consensus mechanism. This ensures that decentralized applications are significantly faster and cheaper to execute within its blockchain.

ABEYCHAIN currently boasts of more than 100,000 users in a rapidly expanding ecosystem. To learn more about XSWAP visit the website https://xswap.com.