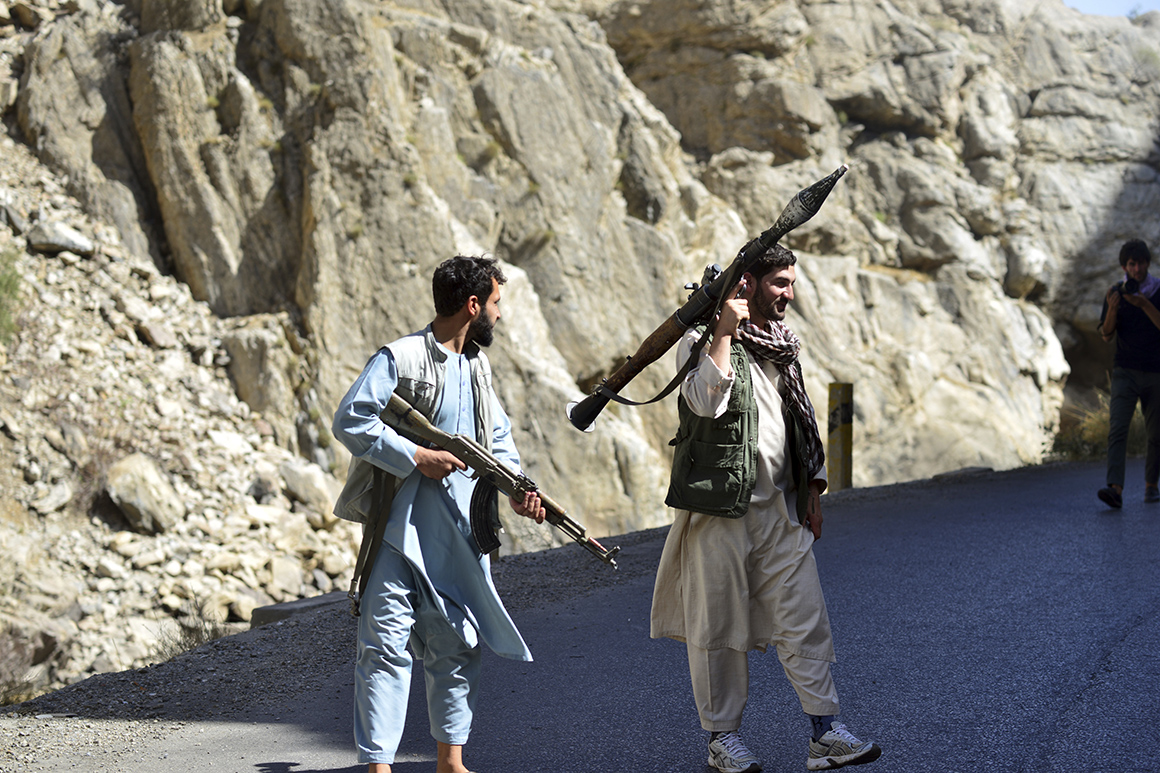 The deteriorating situation in Afghanistan has scrambled President Joe Biden’s Middle East policy. And as countries in the region sort out the new geopolitical landscape, seasoned K Street operatives are eagerly extending a hand to help.

In recent weeks and months, a slew of Middle Eastern countries — Qatar, Libya and Turkey among them — have put out feelers to D.C. lobbying firms in an effort to bolster their presence in the U.S. capital, according to federal filings and K Street operatives. The outreach started in the wake of Biden’s election but has continued in recent months. Egypt brought on an additional firm in February. India, which has been preparing for the return of the Taliban to power, and the Kurdistan regional government in Iraq did the same in the early spring. Foreign principals in Qatar, which has hosted peace talks between the Taliban and U.S. and is home to a major U.S. air base, registered with eight new firms this year.

That was before Kabul’s collapse. The Taliban takeover of Afghanistan this month has added a new level of activity to the K Street-Mideast nexus, leaving countries anxious and uncertain and lobbying shops hustling to their aid.

Former Rep. Jim Moran (D-Va.), who represents Qatar for the law and lobbying firm Nelson Mullins Riley & Scarborough, insisted that the small Gulf nation is not looking to capitalize on the goodwill they are winning for helping evacuate and house Afghan refugees, calling the effort an “all hands on deck” moment.

Still, he said, “I do think that things are going to be somewhat different [in the region] in the years ahead.” To that end, Moran didn’t rule out the possibility that at some point Doha might wind up lobbying Washington for more arms sales now that the Taliban is arming itself with U.S. weapons left in Afghanistan. He cautioned Qatar wouldn’t “want to take any initiative to build up weaponry” but that “if others in the region are weaponizing” then Doha has “to be smart about it.”

“I think that the U.S. will be more mindful of the fact that Qatar has stepped up in the way that they have,” he added, “and they’re willing to do anything else to be helpful.”

A few lobbying firms, meanwhile, have already reached out to pitch their services to Ali Nazary, Afghan resistance leader Ahmad Massoud’s head of foreign relations and spokesperson. But Nazary declined to say which firms had contacted him, citing non-disclosure agreements he had signed.

Asked whether they would consider hiring a lobbying firm, he said: “Probably in the future. There are some people who are in touch with me, but at the moment we haven’t signed any contracts with anyone.”

Nazary, who’s been working with Massoud for more than six years, said he’s spoken to many people in Congress in the last three months and that his outreach has ramped up in the last week, with more meetings this week. Asked if he had been to the White House yet, Nazary said: “No representative of the National Resistance Front, including myself, has been invited to the White House or State Department yet but we are hopeful it might happen soon.”

Massoud, now holed up in the Panjshir Valley of Afghanistan, the only remaining area of Afghanistan not controlled by the Taliban, last week wrote an op-ed in the Washington Post asking the West for weapons, ammunition and other supplies. Nazary, who only escaped Kabul last Tuesday and had to go “undercover” and off the grid for three days to dodge the Taliban, told POLITICO he sent the op-ed to the paper.

Middle Eastern nations are no strangers to K Street. Many made major investments in influence peddling during the Trump administration in hopes of shaping Donald Trump’s mercurial foreign policies. Clients in Qatar spent about $157 million on lobbying and P.R. fees between 2016 and the most recent filings, and clients in Saudi Arabia spent about $114 million in that period, according to Open Secrets, a research group that tracks money in politics.

But a portion of the influence peddling during the Trump era also took place off the books, out of public view and in violation of the law. Trump’s former campaign chair, Paul Manafort, was convicted of eight felony charges, among them failing to register as a foreign agent for a pro-Russian Ukrainian political party (he was later pardoned by the president). Former RNC deputy finance chair and Republican megadonor Elliot Broidy pleaded guilty to one count of conspiracy to violate the Foreign Agents Registration Act, after he and others failed to report that they accepted millions of dollars in exchange for lobbying services. And Tom Barrack, a longtime Trump ally and adviser, was arrested on charges that he failed to register his foreign lobbying for the United Arab Emirates.

Among the allegations, prosecutors say Barrack inserted pro-UAE language into a Trump campaign speech in 2016. But the disruptiveness of Trump’s Middle East policy didn’t end there. As president, Trump cozied up to Saudi Arabia’s rulers and vetoed resolutions that blocked arms sales to the kingdom, while initially praising a Saudi-led boycott of Qatar in 2017. He also formally recognized Jerusalem as the capital of Israel and moved the U.S. embassy to the city from Tel Aviv. And in a move that was hailed by the then Israeli prime minister, Trump pulled out of the Iran nuclear deal.

“If you have an administration that is clear in its objectives, competent in its implementation and predictable in its behavior, you probably don’t have an overwhelming need for Washington lobbyists,” said Mark Dubowitz, chief executive of the Foundation for Defense of Democracies, a nonpartisan national security think tank that has been active in Middle East policy debates, including opposing the Iran nuclear deal. “If you have an administration that’s the opposite, it’s great for business.”

When power changes hands in Washington, it’s typical for foreign governments and corporations alike to add additional members to their lobbying teams who may have close ties to the new administration or party in power. Now, countries want to maintain those returns they received from the Trump administration, said one individual who advises a foreign government.

Foreign principals in Saudi Arabia, among the most aggressive countries in its D.C. lobbying presence, reported paying $31 million to their FARA-registered lobbyists and public relations professionals in 2020, according to a report from the Foreign Influence Transparency Initiative released in May. That same year, the 23 firms representing the Saudis also made more than $1.5 million in campaign contributions (campaigns may not accept contributions from foreign nationals under federal law, but they are free to do so from their lobbyists).

“When you’re thinking about countries like Saudi Arabia and the U.A.E. especially, they had so many inroads into the Trump administration both through their legal influence operations and their illegal influence operations,” Ben Freeman, director of the Foreign Influence Transparency Initiative, said, adding that Trump’s 2020 loss was a “big hit” to their influence in Washington. “I think you’ve seen with both countries, and with Qatar too, you’ve seen the addition of some new firms to their payroll, some new lobbyists working for them that are better connected to Biden land.”

In March, Qatar signed with a firm led by Mike McKay, a former senior adviser to House Foreign Affairs Chair Gregory Meeks (D-N.Y.), and Eulice Brandon Garrett, another well-connected former Democratic aide who served as a policy director and political adviser to then-Vice President Joe Biden during the 2012 election.

Freeman speculated that the situation in Afghanistan may spur a new lobbying frenzy: “What I think we’ll see from countries in the Middle East that are the perennial lobbying heavyweights, I think they’re going to double down on their message to the U.S. about everything that they’re doing to fight terroism, and to fight radical extremism.”

One Middle Eastern ambassador to the U.S., who spoke on condition of anonymity, said that for Mideast countries banking on U.S. support, the crisis in Afghanistan increases the need for such lobbyists. The ambassador also said that as he considers the partisan makeup of the lobbying firms he may hire in the next year, he has to think about the consequences of the midterm elections, where Democrats may be more vulnerable because of the chaotic Afghan pullout.

“You need to focus on the Democrats because they have the majority, but I try to make sure that I have some Republicans as part of the mix in case things change during the midterms as I think they will,” he said.

One lobbyist who declined to be named but whose firm represents a Middle Eastern government said that their client has been providing updates to GOP lawmakers who were looking for more complete information than they’d been getting, and facilitating other backchannel communications while working to ensure the situation in Afghanistan doesn’t escalate further — in other words, “realpolitik stuff,” the lobbyist said.

Though other Middle Eastern countries may be met with open arms by K Street, it remains to be seen whether any firm or lobbyist will take the Taliban as a client. A survey of major D.C. lobbying firms asking whether any would consider representing the Taliban in Washington yielded mostly crickets. John Raffaelli, the founding partner at Capitol Counsel, put it bluntly in an email: “NO,” he responded.

When asked whether Brian Ballard, a close ally of former President Donald Trump whose firm, Ballard Partners, lobbied for the Turkish and Qatari governments, would agree to represent the Taliban, Justin Sayfie, the firm’s spokesperson, had just two words for POLITICO: