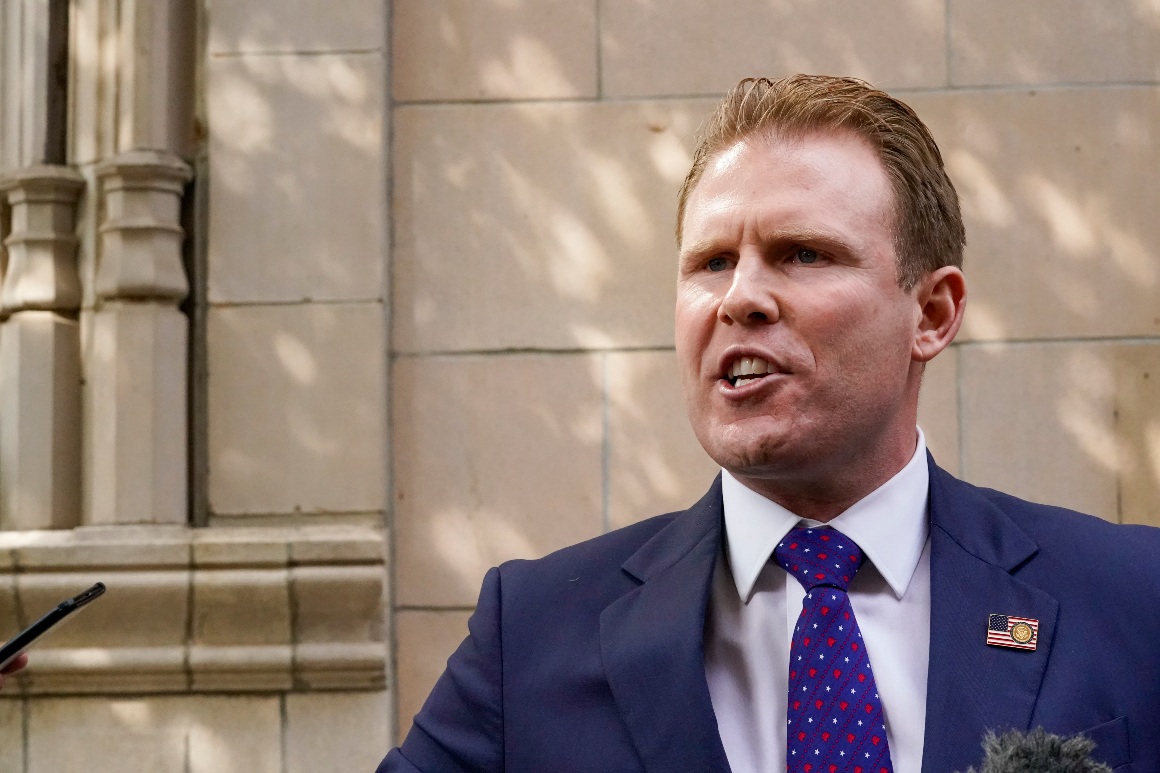 LOWVILLE, N.Y. — Andrew Giuliani stopped to pet a cow while touring a corner of the Lewis County Fair where 4-H members displayed prize chickens and the local Holstein club was auctioning off bull semen.

“I don’t do that too much in Manhattan,” he said.

Giuliani, the son of former New York City Mayor Rudy Giuliani, would like to replace Andrew Cuomo as governor of New York next year. Republicans have have attempted to center the conversation about the still-crowded field of gubernatorial candidates on Rep. Lee Zeldin. The party declared him the “presumed nominee” in June, a full year before primary voters will decide who the actual nominee will be.

But Giuliani, the son of former New York City Mayor Rudy Giuliani, just might be the biggest wild card in the still-young race to run against Cuomo or another Democratic nominee in 2022. For one, he almost certainly has the highest name recognition in the field. “How’s your old man doing?” — a question one stranger asked him at the fair — is presumably not a question that Zeldin gets asked with any regularity.

All evidence suggests he’s putting real energy into his campaign and not simply resting on his family name as a lot of people in New York political circles assumed he might when he launched this spring. While he spent four years as an adviser to Donald Trump (and, by one measure, the former president’s most frequent golf companion), his only previous run for office entailed a brief flirtation with a New York City mayoral campaign.

He’s now a regular presence across upstate New York, at places like the fair in Lowville, a town of 3,500 people located to the west of the Adirondacks, about halfway between Utica and the Canadian border.

Before this year, Giuliani’s most prominent appearance in New York politics came when he was just 7 and took the mayoral oath of office along with his father — a scene-stealing performance that earned him a Chris Farley portrayal on Saturday Night Live. Now 35, Giuliani’s work since has included the pursuit of a career in golf and a job in the White House, with a portfolio that included managing Trump’s interactions with sports teams.

Some of the people who have seen Giuliani on the campaign trail think his efforts should not be discounted.

“He seems to be more of an appeal to the Trump-oriented voter than Zeldin,” said Jeff Graham, the former mayor of Watertown, a city about five miles from Lake Ontario. Graham recently hosted Giuliani on his local talk radio show.

“Zeldin — there hasn’t been a lot of pizzazz in his efforts so far. If you’re going against Cuomo, you have to be a fighter, because Cuomo’s a street fighter. He’s going to throw a lot of elbows under the basket,” Graham said. “And I do think Giuliani has more spirit than what I’ve seen from the other candidates.”

But, Tague added, Giuliani is “very smart, very good on his feet, and he’s very personable. I was actually very impressed with him. And he has a lot of knowledge on a broad range of things, which I was also impressed with, and I think it would be wrong to just ignore him … Whether this is his time or not, to just cast him aside and not give him any respect, I think, is wrong.”

Tague backed Zeldin in a June straw poll of GOP officials. The 41-year-old Long Island congressman received 85 percent of the weighted vote, former Westchester County Executive Rob Astorino got 5 percent and none of the other candidates received any support.

If there’s a similar result when party leaders officially convene this winter, then Zeldin will receive an automatic spot in the June primary and be able to characterize himself to potential donors and voters as the party’s endorsed candidate. Everybody else will need to shift their attention to collecting tens of thousands of petition signatures in order to appear on the primary ballot.

Winning a gubernatorial primary without a party’s backing is obviously a more difficult path. But it’s been done before, most recently in 2010, when Rick Lazio — who, like Zeldin, served four terms in Congress representing Long Island — was stunned by Carl Paladino, a Buffalo developer who ran a grassroots campaign appealing to the types of voters who would eventually form Trump’s coalition.

There’s another more recent example of a candidate winning a major office with negligible establishment support at this point in a race.

“[Trump] would have just announced his candidacy in 2015 for president,” Giuliani said. “That’s kind of where we are for a gubernatorial — we’re 15-and-a-half months out still. Obviously some stuff has moved quick at this point, but I think if we continue to build the grassroots by coming to these massive gathering places, we’re going to have a great chance.”

Giuliani is promising to bring something resembling a Trumpian style of politics to office if elected. There’s long been an unwritten rule in New York politics that governors should not publicly feud with individual state legislators, and those who have violated the rule have faced serious consequences.

Eliot Spitzer crossed that line in 2007 by attacking members of the Assembly who didn’t support his plan for choosing a new state comptroller, and he was never able to stabilize his administration’s relationship with the Legislature. When Cuomo crossed the line earlier this year by lashing into Assemblyman Ron Kim, who had criticized the administration’s decision to hide the number of Covid-19 deaths tied to nursing homes, he created a national news cycle focused on the governor’s history of bullying behind closed doors that rapidly evolved into a discussion of allegations of even more improper behavior by Cuomo.

But for Giuliani, directly combating members of the Democratic-dominated Legislature is part of his campaign pitch.

“I’d like to invite every single Assembly member over for lunch within the first 90 days and see if we can develop [a] rapport,” he said. “If that doesn’t work, then, ultimately, we need to make sure that we can use the governor’s bully pulpit to cut taxes.”

He said he’d go into the districts of individual lawmakers to push his agenda if they buck him — an aggressive move for a New York governor.

“We’re going to go beyond them and go to their constituents,” he said.

Zeldin, like Giuliani, has spent recent years as a prominent supporter of Trump. He voted against the certification of the presidential election on Jan. 6 and was one of the former president’s most vocal defenders during the first impeachment.

Trump is expected to host a fundraiser for New York Republicans on Aug. 5. He hasn’t publicly tipped his hand on whether or when he’ll make an endorsement in the gubernatorial race.

Giuliani does not expect an endorsement “until the spring of next year, if he does.”

“My guess is he probably sits it out. Obviously, I would never turn down an endorsement from President Trump,” Giuliani said “But I know how his mind works, I know how the inner workings of his political team work, and if you have multiple friends in a race, generally you kind of sit that out and see how it plays out. So my guess is he sits this out until it’s clear we’re going to be the candidate.”

Even if Giuliani pulls off an upset in the primary, he would enter the general election as an even bigger underdog. No Republican has won any statewide election in New York since 2002, and the results have rarely been close since then. And unless the mood of the electorate drastically changes — much of Cuomo’s successful 2018 campaign messaging simply pointed out that his opponent was registered in the same party as Trump — it might be tough to imagine a White House alum will be the one to break that streak.

But Giuliani thinks there’s a path, and it might be very similar to the one followed by his father when he was elected mayor of New York City in 1993. He notes that crime was a top issue for Democratic voters in June’s mayoral primary, which was won by Eric Adams, a former NYPD captain who pushed a law-and-order message.

“When that’s the number one issue for Democrats, generally what you see is Democrats will cross the lines and vote for Republicans or may not come out to vote,” Giuliani said “That gives me a lot of hope that we’re going to have a great chance to get the crossover vote that we need.”

It also helps that Cuomo is as vulnerable as he’s ever been. He is facing multiple investigations, including an impeachment inquiry, related to allegations of sexual misconduct, the scandal around deaths tied to nursing homes and claims he improperly used state resources to help him write a book. He will almost certainly face a bruising primary if he follows through on his plans to seek a fourth term.

But to even have a chance at pulling off a seismic upset — against Cuomo or another Democrat — Giuliani will first need to pull off a primary upset and win over voters in Republican strongholds like Lewis County.

The county, which gave Trump 70 percent of the vote last year, might be sparsely populated, but it’s the type of place where a Republican characterizing themselves as running against the establishment could find some success: The first house seen when crossing the county line from the south displayed a flag similar in design to a MAGA banner, but containing a message that was nine letters long. The final five were C-U-O-M-O.

“We feel like if we can make inroads with these voters,” Giuliani said, saying doing so will give him “the best chance to ultimately win.”

“Rather than appealing to the few of the party leaders,” he added, “I’d much rather appeal to the 3 million New Yorkers who are going to vote in June of next year.”