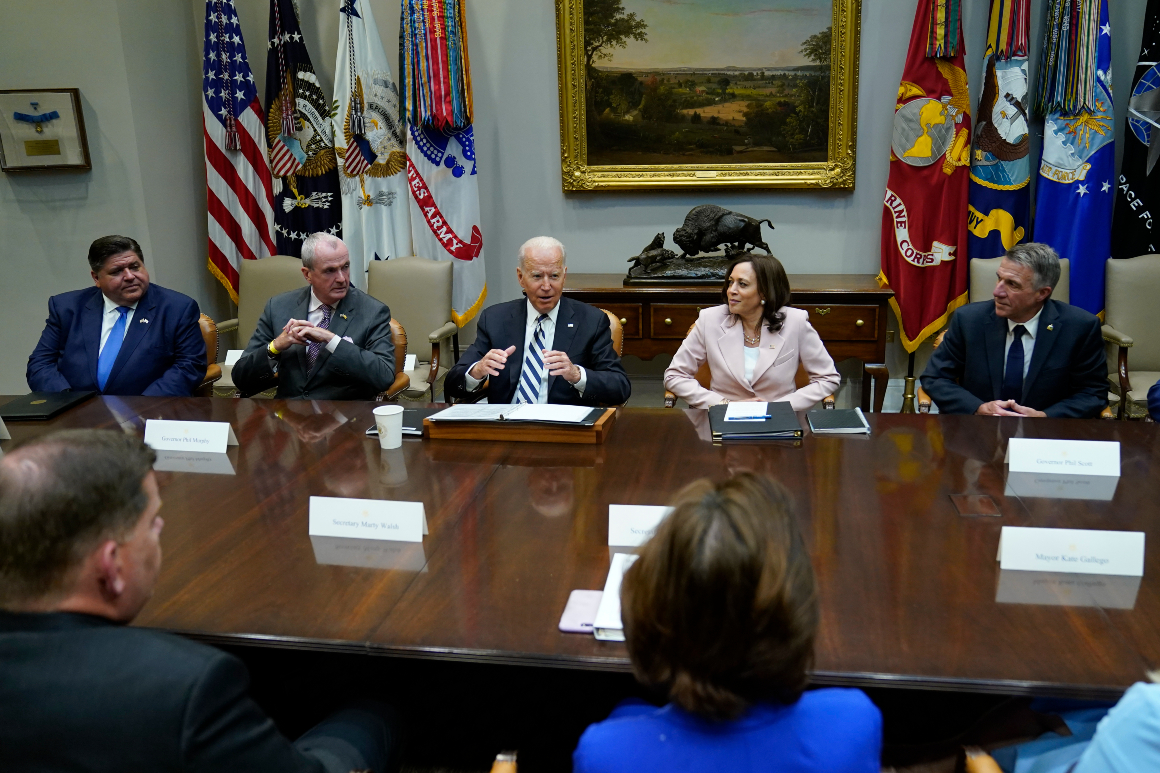 For months, White House negotiators had a clear directive from the president: Whatever you do, find a way to get to “yes” with Republicans.

President Joe Biden’s team, as one White House official put it, ignored the “constant commentary” and “lots of Monday morning quarterbacking” that came with across-the-aisle negotiations. Instead, they paid close attention to concerns of the elected lawmakers, moving rapidly to tamp down the intermittent flare-ups.

Those major flare-ups didn’t come. And on Tuesday, Biden’s physical infrastructure bill passed the Senate with every Democrat and 19 Republican votes.

“Being bipartisan and finding places where we can be bipartisan, that is a mandate that we’re working under all the time, whether it’s on infrastructure” or smaller items, said Louisa Terrell, director of the White House Office of Legislative Affairs. “I don’t think we’re Pollyannaish. But I don’t want to underestimate the kind of momentum you get from this.”

The passage of the bill caps a remarkable stretch of negotiations between the administration and the Senate, one that moderates from both parties believe could serve as a blueprint for future agreements. In a victory lap after Senate passage on Tuesday afternoon, Biden took aim at those who consider bipartisanship “a relic of an earlier age.”

“I never believed that. I still don’t,” the president said. He chided his critics and the press — asking if they’d learned any lessons from watching him negotiate — and said he had just read 50 statements from “very serious press people that my whole plan was dead from the beginning.”

But “momentum,” as described by Terrell, is often short-lived in Congress. And even as the White House celebrated passage of the infrastructure bill, it remains unclear what other agenda items Republicans will be willing to collaborate on. Even advocates for bipartisanship are skeptical about future deals.

The infrastructure bill still must go through the House. And the reconciliation package, which includes more ambitious spending on child care, education and climate change, has an uncertain fate in the Senate. When pressed on the timing of House passage of the infrastructure deal, Biden laughed, confidently declaring, “we’ll get it done, I’ll get both.”

All 50 Senate Democrats need to be on board to move the reconciliation package. Progressives are concerned their party-line bill will be slashed to accommodate moderate Democrats. Moderates, meanwhile, want to see the bipartisan bill reach Biden’s desk as soon as possible, rather than waiting for the second, Democratic-only legislation to pass.

“We have a delicate balance right now,” conceded Sen. Brian Schatz (D-Hawaii), noting that the fate of both bills is closely linked. “It’s fair to say that we have our incentives aligned, the people who want to vindicate their MO, in terms of bipartisan cooperation, know that it’ll only work if they play nicely on reconciliation.”

Beyond infrastructure, it remains unclear what types of bipartisan cooperation can be achieved on other legislative items. Even those who spend their days promoting political moderation aren’t bullish about the prospects.

“Hope will spring eternal with the moderates on both sides to try to keep the magic going,” said Matt Bennett, co-founder of the center-left group Third Way. “But nobody has even the faintest idea if they can produce another seven of their colleagues to do anything beyond this bill. There are nuts that are too tough to crack.”

Democrats in both chambers say they share that skepticism about future cross-aisle deals with Republicans and are tired of waiting for them.

For many party members, the time spent on the bipartisan bill was important for achieving Biden’s campaign promises. But it also poses potential risks. They have bet big that progress on pocketbook issues can reverse decades of political headwinds for a president’s party in the midterms. Biden’s advisers and Democrats argue that individual provisions in the multi-trillion spending plans could alone be enough for down-ballot Democrats to run on in the midterms.

But the president’s ability to reap the political rewards of the infrastructure package is complicated by another coronavirus surge as administration officials struggle to boost vaccination rates.

In recent weeks, Sarah Longwell, a Republican strategist who supported Biden in 2020, has been conducting focus groups with college-educated voters who supported former President Donald Trump in 2020, trying to determine if there is an opening for Biden with them. Longwell found no wiggle room, at least not yet, saying the voters won’t mention infrastructure in her focus groups and are fixated on the idea that critical race theory — the academic concept that racism is embedded in American institutions — is poisoning their children’s views of the country. They also are deeply committed to the erroneous idea the election was stolen, she said.

“[Democrats] think that they can sort of policy their way toward bringing more white working class voters back to the Democratic side. I’m not convinced yet that even concrete, material, monetary benefit overrules a lot of these cultural issues,” Longwell said. “And I think that Republicans’ theory of the case is that you can sort of critical race theory, Dr. Seuss your way into the majority.”

In the weeks ahead, White House officials say they plan to use public polling showing the popularity of the proposals inside the bipartisan deal to compel skeptical House Democrats to support it. White House officials will hammer home the impact of money for bridges, electric vehicle charging stations, and lead pipe replacement, said Terrell. “That kind of momentum and energy will help us in our strategy with our House colleagues to move as quickly as they can.”

To get to this point, the White House adopted what Terrell described as a “three conveyor belts” strategy. One belt was focused on Senate negotiations, another involved deploying the Jobs Cabinet to sell the president’s plan to key lawmakers in their home states and districts. The third was “day-to-day outreach” from Biden’s legislative affairs team to congressional lawmakers.

Biden’s focus on working across the aisle was a campaign promise. But it was also part of the conveyor belt approach. Democrats believed that in order to win the votes of moderate members for the party-line reconciliation package, the president needed to work with Republicans first.

The president’s advisers predicted that there would be reputational benefits to striking the deal with Republicans, ones that would suit them well in the midterms. A number of Senate Democrats agreed.

“[Biden] does it because he thinks it will maximize his chance of getting something done and I think he also believes, honestly, and I agree with him, that the American public wants to see us not just squabbling but trying to work together,” said Sen. Tim Kaine (D-Va.). “I don’t view this as the last bipartisan deal, and maybe some of the working relationships forged within that group of 10 or 20 might facilitate other bipartisan deals going forward.”

Some senators point to legislative efforts to counter China’s economic and geopolitical ambitions, repealing the authorization for use of military force, cutting the price of prescription drugs and addressing mental health needs, particularly for frontline health and caregiving workers during the pandemic, as future areas of agreement.

But among bigger ticket items, including a pathway to citizenship for Dreamers and voting rights legislation, there are few, if any, legislative paths forward through the Senate due to Republican opposition. The White House supports tucking citizenship for some immigrants into the reconciliation bill, but it’s unclear if it will pass the Senate’s budget rules. The window on other issues may have already closed. Once-promising negotiations on police reform have all but stalled, and Democratic moderates remain strongly opposed to eliminating the filibuster to pass legislation with a simple majority.

“If we don’t fix voting rights, how are you going to up the numbers?” asked Tiffany Flowers, a leader with The Frontline, a group of liberal organizations led by Black activists. “We can’t organize [voters] that don’t feel inspired, We can’t gin up any more inspiration without any results.”

Once (and if) Biden’s infrastructure and social spending plans are signed into law, many across the party anticipate the president will face far more scrutiny from his Democratic allies. Lawmakers and activists are already agonizing about their chances in next year’s midterms if federal voting rights legislation isn’t passed to counter the GOP-backed voting restrictions moving out of statehouses.

Biden reiterated his support for voting rights bills in Congress and pointed to his 36 years in the Senate as evidence he understands the process, attendees told POLITICO. Biden also stressed that it was important to focus on the infrastructure bill early on to demonstrate good faith with Republicans rather than immediately turning to areas of more pronounced disagreement.

“I left feeling like I trust what he’s saying, and they weren’t giving up on this, and it was a question of sequencing,” said Neil Makhija, executive director of Indian American Impact.

For now, Biden’s focus is on shepherding the infrastructure bill and the $3.5 trillion reconciliation package through Congress, and selling it to the American public. Top-line elements of that bill are popular in public opinion polls and officials anticipate Biden will spend the better part of 2022 campaigning on the measures. Democrats up and down the ballot told POLITICO they plan to hitch their fortunes to Biden’s accomplishments in next year’s campaigns.

“What is extremely clear from polling is that both the bipartisan infrastructure deal as well as the larger Build Back Better agenda are overwhelmingly popular with voters,” said Zac Petkanas, a Democratic consultant who founded a group that helped Democrats push through the Covid-relief bill.