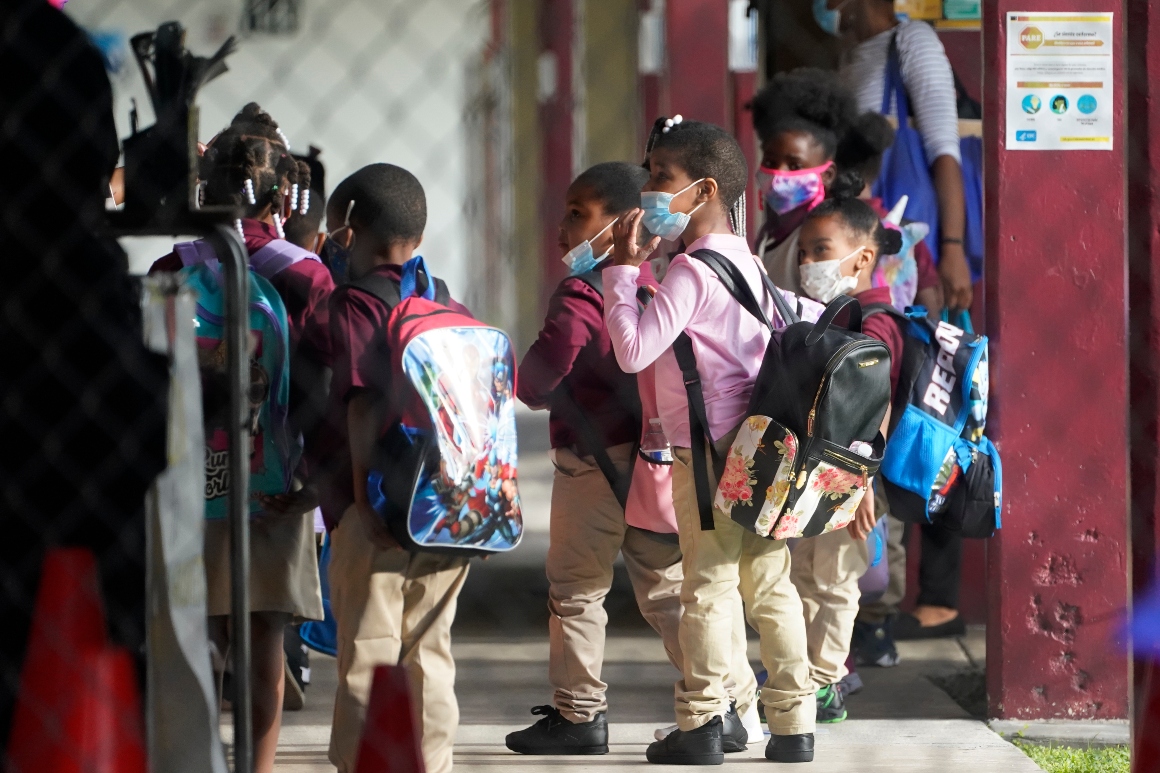 TRENTON, N.J. — New Jersey has spent more than two decades — and many billions of dollars — building a high-quality, free universal pre-K system to serve all needy kids in the state. It’s won widespread acclaim. And President Joe Biden’s administration wants to make it a model for the nation.

But the program has an accountability problem.

In Trenton, the state’s capital and one of its poorest cities, private pre-K providers have long complained of “political favoritism” and a state Department of Education unwilling — or unable — to step in.

Now, some of these providers — community groups that are funded by the state and contracted by the school district — say it’s time for the state to confront the structural issues they claim are degrading the preschool experience for needy children throughout New Jersey as Gov. Phil Murphy seeks reelection.

Documents obtained through records requests show a head custodian at the Laura Spelman Preschool Academy in Trenton who was a former deputy mayor and one-time congressional candidate went from earning $53,000 to more than $113,000 in a four-year period from 2016 to 2020 — overseeing the cleaning of eight classrooms in a school run by his wife.

In an April letter to the state Department of Education, one provider, Alma Garcia, cited documents she obtained that were reviewed by POLITICO showing instances of directors being paid above their experience levels, teachers being underpaid and one director earning $144,600 for working “0.78 time.”

Another director — a position akin to head of the school — is allegedly being paid a salary that calls for a graduate degree, despite only earning a bachelor‘s degree, according to Garcia’s letter.

According to community pre-K providers POLITICO spoke to across the state, the situation in Trenton is not an anomaly, but rather evidence of a much larger accountability crisis within New Jersey’s nationally recognized preschool system.

School districts, providers said, are controlling the purse strings and when tensions arise, can use their power to approve arbitrary or politically motivated salary increases, withhold contracts and reduce budgets without explanation.

Kimberly Stout-Figueroa, executive director of Kids Ink, another Trenton pre-school program, wrote in a separate letter to the DOE that in 2018, the city school district inexplicably reduced her program’s budget and altered its expenditure reports. In the letter, she said that in 2019, the district withheld more than $55,000 and “recouped” nearly $85,000 in salaries paid to substitute teachers claiming “they were not a board-approved expense.”

As a result, Stout-Figueroa wrote in her Oct. 7, 2019, letter, Kids Ink was unable to pay rent and was forced to close two classrooms, meaning “there are now fewer spots for the preschool students of our county.”

After receiving no response to her letter, Stout-Figueroa used the state’s Open Public Records Act to track her emails within the Education Department. According to her OPRA documents, which POLITICO reviewed, officials at DOE received the letter and forwarded it to colleagues. Stout-Figueroa said no one responded.

Providers in Trenton said teachers at state-funded private community groups — which mainly serve low-income children and children of color — are often underpaid compared with their district counterparts, program directors aren’t always properly credentialed, the district can be uncooperative and the state is nowhere to be found.

“If it is not being implemented as designed, then we are just pretending we have this excellent program, but in reality, I know we don’t,” Garcia, executive director at the Puerto Rican Community Center, another private preschool provider in Trenton, said in an interview. “It looks like everywhere we turn, it’s kind of like a cover-up and pretending that this is not happening.”

After years of suspecting all pre-K providers were not being treated equally by the Trenton school district, Garcia and education lawyer Denise Lanchantin Dwyer filed requests for thousands of employment documents, staffing reports, budget spreadsheets and contracts for all of the private pre-K providers working in Trenton dating back to 2017.

What they found, Garcia said, was evidence of large sums of taxpayer money being misspent on administrator salaries while preschool teachers and aides went underpaid. This ultimately deprives some of the state’s most vulnerable children of the preschool education they are entitled to receive by law, Garcia said.

Officials from the Trenton school district did not respond to several phone calls and a detailed email request for comment.

Garcia said she has been sounding the alarm for years but that her calls, emails and letters warning state officials about abuses and improprieties within the system have been ignored.

Garcia said that as Murphy runs for reelection, relying heavily on his track record of expanding access to pre-K statewide, it’s time for the state to acknowledge the holes in the system.

“This is a crisis and they need to pay attention,” she said.

A spokesperson for Murphy did not respond to several requests for comment.

The Department of Education denied several requests by POLITICO to speak with officials in its Early Childhood Division.

Shaheed Morris, a department spokesperson, said in an email that the DOE “reviews every concern it receives, including those that are anonymous.” If necessary, Morris said, the DOE works with providers and districts to “address the situation.”

“For matters that arise to a level of dispute,” Morris referred to a clause in the contract that districts and providers sign that says, “The District and Provider shall attempt to resolve any dispute that may arise under this Agreement. If the dispute cannot be resolved locally, an appeal may be made to the Commissioner” of education.

The pre-K system in New Jersey was built up over a generation. No other state has a program like it.

One branch of the system is the so-called Abbott preschool program, created in 1998. It’s the realization of a vision put forth by the state Supreme Court through its landmark Abbott v. Burke school funding case that requires all 3- and 4-year-olds in New Jersey’s 31 poorest school districts to receive a high-quality, full-day, full-year preschool education at no cost to parents.

What’s different about New Jersey’s preschool system — what has members of the Biden administration meeting with the state’s education advocates and preschool experts — is something called mixed delivery. Under the system, private providers already working in the community are funded by the state but receive their money through contracts with local school districts.

These providers are held to the same standards as the districts — small class sizes, credentialed teachers and aides and curricula linked to K-12 academic standards.

Many school districts in New Jersey offer their own pre-K programs that are state-funded. But in Trenton and some of the other Abbott districts, preschool is handled exclusively by both private providers that receive state money funding and federally funded Head Start programs.

The state budget Murphy signed in June includes an additional $50 million for pre-K, including $26 million for new programs, upping the $781 million New Jersey spent in 2019-2020 to serve 55,413 kids. In total, Murphy has spent more than $3.3 billion on preschool funding during his four years in office according to state treasury figures.

According to data from the National Institute for Early Education Research at Rutgers University, New Jersey and Oregon were the only states to expand access to preschool in 2020-21, despite the pandemic.

The need for private providers

Working with private providers is crucial to a strong preschool system, said Cynthia Rice, a senior policy analyst with the nonprofit group Advocates for Children of New Jersey. Rice has studied and advised previous administrations about implementing the Abbott preschool program to get the most out of its promise.

Even the courts have recognized that when handing down their order, “our public schools have not been known for their early childhood expertise,” Rice said in an interview.

That’s where the private providers come in.

Rice said that by living, working and and serving in their communities, providers bring the experience and trust necessary to care for and educate young children while districts focus on developing their own programs.

Ideally, Rice said, school districts would recognize what providers bring to the table and work with them to share knowledge, expand their preschool offerings and benefit the community.

“It’s like a marriage. You have good times and bad times but the best ones work collaboratively on behalf of the kids,” Rice said.

For many providers, districts and education advocates — including Garcia — the system as imagined is admirable. But Garcia and others on the ground say it’s being undermined by a gutted Department of Education. The department lacks the staffing necessary to keep school districts from inflating salaries, fighting with providers and retaliating against those who speak out, they say.

When things go south and tensions flare between the parties, it’s the providers who are left vulnerable.

Lorraine Cooke, executive director of the Egenolf Early Childhood Center in Elizabeth, said providers across the state often share stories among themselves of districts that have lashed out at them, taking away classroom space, failing to settle contracts in a timely manner and general conflicts over funding.

“When there is tension between a district and a provider and I have turned to DOE, the response has generally been the provider needs to work it out with the district,” Cooke said. “It feels like providers are out on their own.”

Not every provider has struggled to work with their districts.

But even when relationships between providers and district officials are successful, DOE’s absence has been noticeable, district superintendents say.

“Its a bear to get anything done,” Trisha Camp, superintendent of the Rahway Public Schools, said of working with DOE staffers in Trenton. “We get in, we get established, and things are chugging along. Then, all of a sudden, they’re not there any more.”

Camp said Rahway, which is not an Abbott district, has had success dealing with providers. She said she recently participated in a Zoom call with U.S. Secretary of Education Miguel Cardona to demonstrate why her program was working so well.

Garcia said the fight to get DOE’s attention has been a lonely and isolating one. Providers are fearful of speaking out, she said, because they are “terrified” of being retaliated against by their districts or ignored by the state.

She said the fact that she’s advocating for majority low-income children of color factors in.

“If this was Princeton, would they have the same attitude?” Garcia said, referring to one of the state’s wealthier areas.

How to fix it

Garcia, Rice and Cooke said it wouldn’t be a heavy lift to fix the problems with New Jersey’s preschool system, but it will require recognizing that things are not in perfect working order.

Providers say they want more funding, more hands-on support from the state and more accountability measures to give them a seat at the table in the system into which they contribute so heavily. They’ve called for representative advisory boards or councils where they can bring their complaints directly to the state.

Garcia said, she just wants to know someone at DOE is listening.

“As a woman of color, my experience as a whole in just life, there is no change unless tension is created,” Garcia said. “The more we are silent and the more we conform, the less things are going to change.”