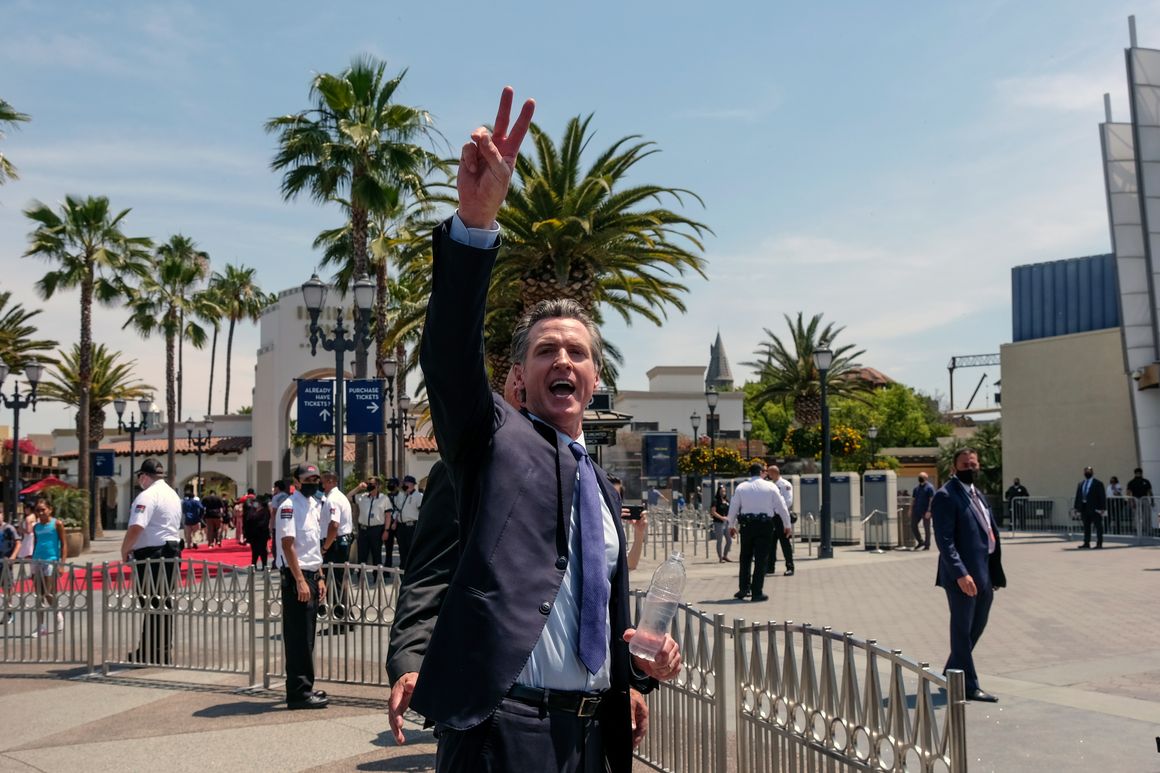 Gov. Gavin Newsom can’t stop talking about the Sunshine State as he campaigns to save his job. He’s using Florida as the ultimate threat of what California could become if the complex recall process leads to Republican leadership in the deep blue state next month.

Meanwhile, Republican hopefuls have repeatedly evoked the East Coast alternative as something to aspire to, fighting to replace Newsom and his public health orders with someone more like mask-averse conservative Florida Gov. Ron DeSantis.

The latest state-on-state tensions show just how much power governors have amassed during the Covid-19 pandemic as they’ve set policies on masks, closures, schools and vaccines. DeSantis and Newsom have become party figureheads in their own right, the former a stand-in for open rules, the latter for strong mandates.

The latest polling suggests California is closer to having a DeSantis-like governor than anyone thought. And those Florida comparisons — with anti-recall proponents begging voters not to “DeSantis my California” — are escalating as the Delta variant surges and the Sept. 14 election looms. Ballots have already been mailed to California voters.

“Your daily reminder that on September 14th the Republican party is trying to drive CA off the same cliff as Florida and Texas,” Newsom said in a recent tweet, urging people to vote. “They want to pretend COVID doesn’t exist. Reverse the progress we’ve made on vaccines. Ban masking. And put partisan games over people’s lives.”

Thousands of miles away, hugged by a different ocean, home to a different Disney theme park and dominated by a different political party, Florida has become a primary talking point in the debate over California’s future. While a state rivalry is nothing new — California Democrats used to be singularly obsessed with Texas — the Florida juxtapositions have escalated in the recall debate from both sides.

As DeSantis was threatening to withhold funding from schools that implement mask mandates against his wishes, Newsom was set to unveil the strictest teacher vaccine requirements in the country, having already implemented school mask policies in California.

“I know this is not a political press conference, but I cannot miss the opportunity to say that if Californians do not participate in the special election coming up, this could be our fate as well,” Oakland Mayor Libby Schaaf said this month at Newsom’s announcement about new school rules, nodding to Florida directives.

At a recall debate hosted at the Richard Nixon Library & Museum in Yorba Linda, GOP contenders lavished praise on Florida.

“What we need to do is look at what other states have done. I mean, I compare California to Florida. I have two nephews that live in Orlando, they were able to go to school the whole time in front of a teacher. Kids in California were not given that privilege by Gov. Newsom,” Republican John Cox said, calling Newsom’s pandemic response and prolonged campus closures “an absolute disaster.”

It’s not really about Florida, though. It’s about who the state, and its political leaders, remind California of.

“Florida has become a proxy for Trumpism,” said Kim Nalder, director of the Project for an Informed Electorate at California State University, Sacramento, pointing out that Florida is home to Mar-a-Lago and embattled Rep. Matt Gaetz (R-Fla.) “California Democrats can use Florida as shorthand for Trumpism at the state level. Republicans can do the same, and to their base, that’s a positive. It’s a way to say the T-word without literally saying it.”

Two states can play at this game, however.

“CA lockdowns have destroyed small businesses, decimated the middle class & kept kids out of school for going on 2 years,” Pushaw said in a tweet. “Grateful to be in Florida now.”

Politically, some recall candidates would certainly fit better in Florida. And some Californians, frustrated from lockdowns, school closures and a Democratic supermajority in the Legislature, would rather have Florida politicians.

That could work for Elder’s base. But it could also work for Newsom, whose campaign has labeled the recall effort as a MAGA initiative, pointing fingers at DeSantis-led Florida as a sort of alternative universe.

“Republicans here also look to California-style regulations as a foil for any number of things they’re trying to get done,” said Steve Schale, a Democratic political strategist in Tallahassee who worked on former President Barack Obama’s Florida campaign. “A lot of it is just playing the game and is a fun-spirited rivalry, but the reality is we’ve gotten into such a place where everything is just a binary choice. For Newsom, turning the mirror back on redder states is a pretty smart strategy.”