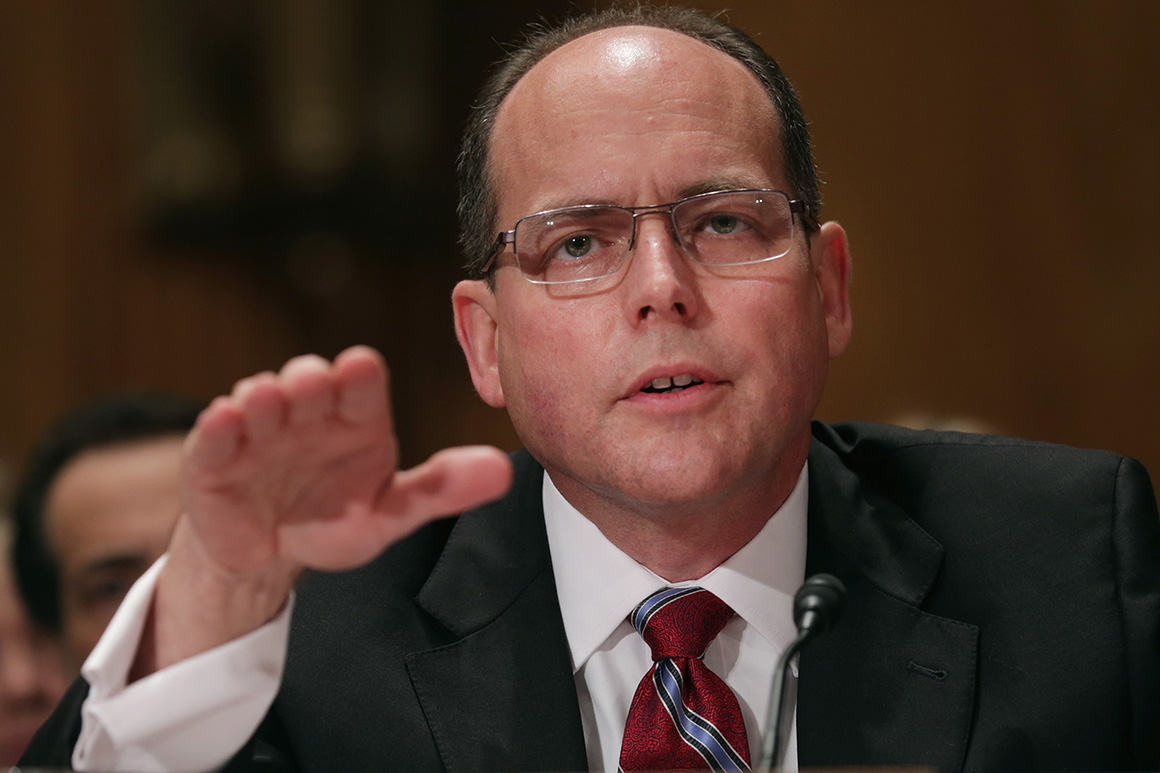 A long-percolating conflict between two prominent alumni of the CIA’s secretive internal watchdog office has burst into public view, creating a headache for the House’s investigation of the Jan. 6 Capitol riot.

David Buckley is now the top Democratic staffer on the select committee investigating the insurrection. But 11 years ago, he was a CIA inspector general who made clear upon taking office that he wanted a cultural shift: Buckley sought a more aggressive approach to rooting out alleged wrongdoing in the agency, prioritizing probes that could lead to criminal prosecutions over inside-the-family resolutions, according to multiple people familiar with the dynamics there.

The shift Buckley imposed was risky. And a dust-up inside the cloistered spy agency during his tenure there — linked to a case involving $3 million and numerous meals at Hooters — shows what’s at stake when government watchdogs disagree over who counts as a whistleblower. It’s a question Buckley may be called on to judge as part of his role in the Jan. 6 probe, and whistleblower advocates warn that his reputation could deter potential witnesses from coming forward.

“I as a whistleblower attorney would definitely need to weigh the costs and benefits of recommending to a client that they go to this committee while David Buckley is the staff director,” Kel McClanahan, a lawyer who represents national security whistleblowers, said in an interview. “Especially if those clients are of the type that don’t have strong whistleblower protections, like Capitol Police or Intelligence Community employees.”

Buckley’s past already has worked its way into the Jan. 6 investigation once thus far. Andrew Bakaj, the former CIA IG office employee who, like Buckley, was connected to the Hooters-related probe, is now a prominent whistleblower attorney who represented two of the four law enforcement officers who testified at the select panel’s first hearing. The two men’s years-old dispute created a dramatic subplot for the proceedings.

Despite the whistleblower advocates urging the select panel to replace Buckley, there are no signs that House Democrats are considering it or have lost any confidence in him.

“David Buckley has served this country for more than 30 years to protect American security and democracy, and he’ll continue to do so on the Select Committee’s staff,” said Tim Mulvey, a spokesman for Democrats on the Jan. 6 panel, said via email. “He understands as well as anyone the importance of whistleblowers in providing information to keep us safe and to keep our government accountable.”

Mulvey added, “The years-old situation conveniently resurfacing now dealt with possibly unlawful handling of information that could have jeopardized one of the CIA IG’s most important and sensitive investigations in recent years. Mr. Buckley did his job to protect the integrity of that effort, and since these events unfolded, a federal court has ruled that the precise sort of action he took does not constitute retaliation.”

That court ruling did not involve Bakaj’s case. And he has been unequivocal. “There can be no credibility without integrity,” he tweeted this week about the select committee.

House Republicans, while torching the Jan. 6 investigation as partisan, don’t appear interested in trying to turn Buckley into a political liability for the committee.

But Mark Zaid, a national security lawyer who represents Bakaj and has worked with him to represent other whistleblowers, said the Committee’s defense of Buckley is troubling. Zaid and Buckley represented the whistleblower who triggered Trump’s first impeachment, and Zaid said he would be “hesitant” to bring other whistleblowers before the committee now.

”The Committee’s defense of Buckley embarrassingly reveals that the Democrats’ support of the IC whistleblower, who Andrew and I represented, was just a partisan exercise to get Trump,” Zaid said. “Once a whistleblower issue conflicts with their political agenda, the whistleblower apparently gets sacrificed. Given this position, the Committee is continuing the illegal reprisal against Andrew.”

The backstory of the Buckley-Bakaj conflict began in 2007, when sales teams at multiple government contracting firms were showering perks on CIA officials, according to a whistleblower complaint filed in 2011.

Among the gifts CIA officials received were tickets to baseball games, VIP access to NASCAR races, hunting trips, and dinners. One CIA official had such a penchant for Hooters that a contracting company named one of its products the “HTRS cable tray.” In return, the companies got lucrative deals for the cabling and wiring of CIA buildings.

But for the contractors and CIA officials involved, the scheme ended badly when that whistleblower filed a lawsuit laying out the kickback allegations. The whistleblower’s case was persuasive enough that the companies settled for $3 million.

Buckley, the top CIA watchdog at the time, touted the office’s work in a press release that vowed his office would work with the Justice Department “to ensure that illegal acts are addressed in an effective manner.”

It wasn’t as effective as it could have been.

The U.S. Attorney’s office in the Eastern District of Virginia had worked to bring criminal charges related to the scheme. Investigators in the CIA Inspector General’s office also gathered evidence about the wrongdoing and shared materials with prosecutors.

But according to four people with knowledge of the situation, some of those materials were mishandled. A document listing the concerns about the evidence, which formed the basis for a Congressional briefing and which POLITICO reviewed, said whistleblowers believed there were inconsistent copies of witness interviews and, in one case, a falsified signature by a person who didn’t even work in the office at the time.

Federal prosecutors working with the CIA IG’s office persuaded one person connected to the scandal to plead guilty to a crime, according to multiple people familiar with the probe. That alarmed multiple officials in the IG’s office, who decided to blow the whistle about those concerns regarding evidence.

With help from Bakaj — the CIA whistleblowers’ colleague at the time — they laid out their concerns to the Intelligence Community inspector general’s office. They also notified DOJ and the House and Senate intelligence committees.

According to the people familiar with the matter, the guilty plea was withdrawn after prosecutors in the Eastern District of Virginia learned about the alleged mishandling of evidence. Though the kickback scheme as described in the complaint raised a host of legal problems, no court records show that any of the people it named were charged with related crimes.

The fiasco triggered tumult inside the CIA IG’s office, which couldn’t investigate itself to figure out what went wrong. So Buckley’s deputy asked former colleagues at the Federal Housing Finance Agency’s inspector general to review the whistleblower allegations.

That review detailed multiple problems involving the management of evidence but did not find deliberate efforts to distort it, according to a copy obtained by POLITICO. Importantly, the review indicated that a top official in the office said she had no training on how to properly store and handle evidence. The report also said that one federal prosecutor working with the CIA IG’s office said, “[T]hings always happen in investigations with a lot of documents and evidence.” It said that one person believed a second person in the office was directed to sign off on reports that she herself hadn’t authored. That second person, however, told the FHFA IG officials that she was only directed to sign reports that she had authored.

The FHFA’s follow-up review sparked more fears in the CIA watchdog office, where some people worried it was an effort to identify the whistleblowers. According to one former CIA IG employee, top officials walked in on their own employees’ interviews for that review –– deepening the concerns.

Bakaj later told officials in the Intelligence Community inspector general’s office that he believed Buckley had targeted him because of his role in helping whistleblowers report the office’s mishandling of evidence.

According to a review from yet another inspector general’s office (this time, the Department of Homeland Security, first reported by Yahoo), Buckley retaliated against Bakaj by placing him on administrative leave. The DHS watchdog concluded that Buckley and other top officials in the CIA IG’s office wrongly punished Bakaj for appropriate activity (the specific appropriate activity in question involved communication Bakaj had with an official in the Intelligence Community Inspector General’s Office on a topic unrelated to the Hooters-connected matter).

David Buckley did not respond to requests for comment. Howard Cox — a senior official on Buckley’s team when the probe of Bakaj opened — pushed back on the DHS report and said it included “a gross misapplication of the law.”

“The report failed to properly examine the fact that the CIA OIG had a legitimate reason to investigate Bakaj in order to determine if he was improperly accessing classified files concerning an ongoing criminal investigation, for the purpose of leaking them to an unauthorized individual,” Cox said.

Cox, who has since retired from the CIA, added that CIA IG leadership suspected Bakaj was linked to an effort to leak material connected to the office’s probe of the CIA rendition program that began during the George W. Bush administration –– a complex and high-stakes investigation scrutinizing one of the ugliest episodes in the history of the U.S. Intelligence Community.

Bakaj told POLITICO the DHS OIG report references Cox as one of several senior managers who also retaliated against him. The report says multiple officials retaliated against Bakaj, but redacts their names. Bakaj said he reviewed an unredacted version of the report. He also said he recently received a TS/SCI security clearance, underscoring the DHS IG conclusion that he did not mishandle classified material.

The CIA kickback affair, byzantine as it is, might complicate the select committee’s probe of the Capitol riot. That’s because, since leaving the CIA, Bakaj has worked extensively with congressional whistleblowers — including perhaps the most important of the Trump era, the still-anonymous person whose account of a now-infamous phone call with Ukraine’s president triggered the former president’s first impeachment.

Efforts to find and prevent government wrongdoing often hinge on who counts as whistleblowers and what counts as retaliation against those people. That dynamic will likely be front-of-mind for the committee’s investigators and witnesses, as well as for the bevy of lawyers managing the complex interactions between those two groups.

And the tension over Buckley’s leadership has underpinned advocates’ calls for his ouster from the committee. On Thursday, the Project on Government Oversight –– a prominent nonpartisan government watchdog group – joined Bakaj, his law partner Zaid, and McClanahan in urging Buckley be replaced. In a blog post, POGO executive director Danielle Brian detailed those concerns.

“I once thought highly of David Buckley’s skill and leadership as inspector general, but revelations about his treatment of whistleblowers are too troubling to ignore,” she wrote.