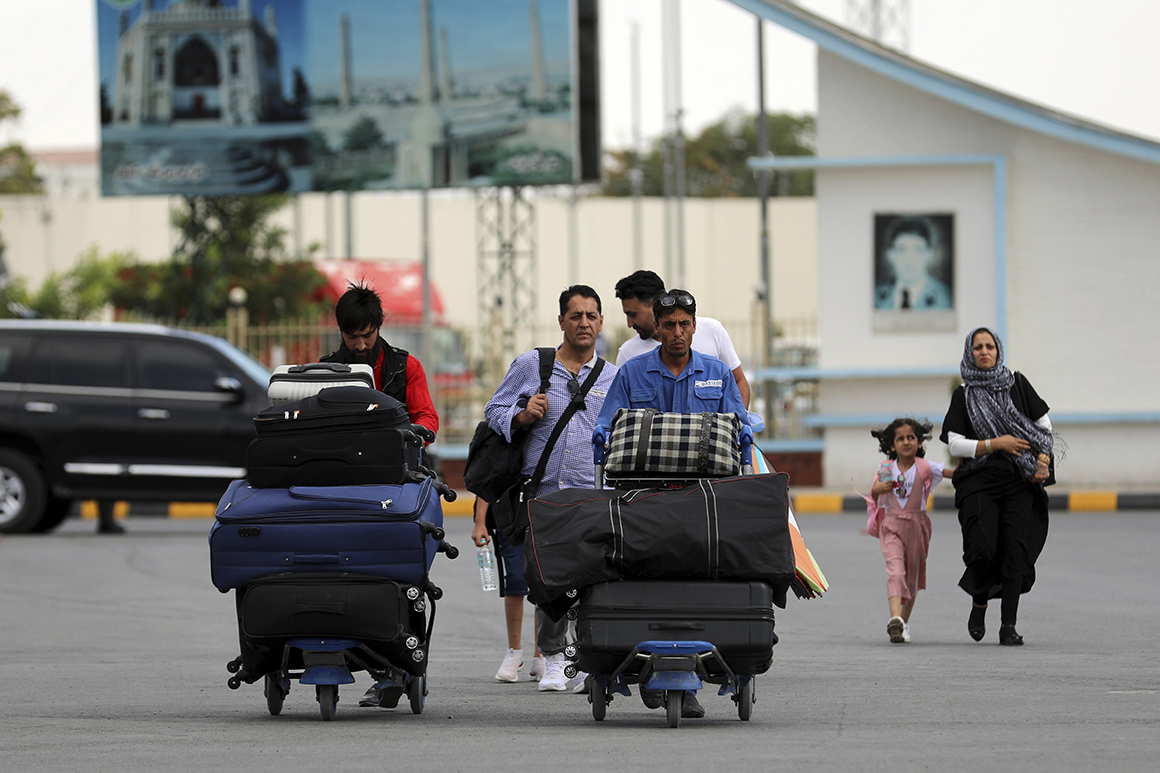 President Joe Biden long touted his foreign policy credentials as a core asset he’d bring to the Oval Office. And once he was in the White House, he proudly proclaimed “America is back” on the world stage.

Instead, chaos and confusion dominated his first major foreign policy decision — the withdrawal of U.S. troops from Afghanistan.

Far from bringing a return to stability as he promised, it has led to the sort of imagery he insisted would not take place on his watch: scenes of American diplomats fleeing the U.S. embassy by helicopter as the Taliban tightened their noose around Kabul.

All day Sunday the White House fended off a firestorm of criticism — rushing Secretary of State Antony Blinken onto Sunday cable shows to attempt damage control. Then Blinken, Defense Sec. Lloyd Austin and Chair of the Joint Chiefs of Staff Mark Milley briefed Hill lawmakers, some of whom railed against what they called a lack of preparedness by the Biden administration. Overwhelmed by pleas from those attempting to exit the country safely and the need for expedited visas, the Pentagon announced an emergency deployment of additional troops, soon to total 6,000 on the ground in Afghanistan.

Heart-rending images of desperate Afghans trying to board flights out of the airport in Kabul flooded social media, while Taliban militants broadcast live from the presidential palace amid reports of al Qaeda and other extremist prisoners breaking loose from government facilities.

“The White House was clearly blindsided and unprepared for the speed of Afghanistan’s collapse. Even Biden allies will not try to claim this as a job well done or say this is what they had planned. After all, nobody would have planned for a last-minute evacuation that was just thrown together out of necessity,” said Brian Klaas, a political analyst and expert on democracies who now teaches at University College London.

For months, Biden’s advisers had been downplaying the likely political impact of the U.S. exit, pointing to polls showing that voters were tired of war and just wanted to bring the troops home. And they noted that it was Biden’s predecessor, Donald Trump, who approved the peace agreement with the Taliban in his final year in office.

It’s the execution of the withdrawal policy, however, that’s under assault — a particular failure given it happened under a president who since the presidential primary boasted he stood out from the pack because of his four decades serving on the Senate Foreign Affairs Committee and his time on the global stage as vice president.

“Whether the policy was right or wrong,” Klaas said, “the execution was clearly botched.”

That sentiment was echoed by Rep. Seth Moulton (D-Mass.), a Marine who served four tours in Iraq. “The time to debate whether we stay in Afghanistan has passed, but there is still time to debate how we manage our retreat,” Moulton said in a lengthy statement Sunday. “For months, I have been calling on the Administration to evacuate our allies immediately,” he continued. “The fact that, at this hour, we have not even secured the civilian half of the Kabul airport is testament to our moral and operational failure.”

The end of America’s longest war was supposed to happen quietly. But the chaotic American departure from Kabul suggests that Biden will forever own what is undoubtedly a humiliating coda for a doomed nation-building effort that began shortly after 9/11 and will end shortly before the 20-year anniversary of that tragedy.

Perhaps the most damning moment for Biden were his own words at a July 8 news conference, when he explicitly declared there would be no parallels between the U.S. withdrawal from Afghanistan and the fall of Saigon, when military helicopters took part in an urgent evacuation in the final days of the Vietnam War.

“There’s going to be no circumstance where you see people being lifted off the roof of an embassy,” Biden said then. “It is not at all comparable.”

The whole episode hit home for Rep. Stephanie Murphy (D-Fla.) a Vietnamese refugee whose parents escaped the war-torn country by boat when she was an infant. Murphy said her heart breaks for those battling to leave Afghanistan and expressed disappointment in how the U.S. was departing.

“I also worked at the Department of Defense, I know what a planned drawdown looks like. I know what an orderly departure looks like. I’m disappointed that this is the way in which we are withdrawing,” Murphy said in an interview Sunday. Murphy participated in lawmakers’ call with Blinken, Austin and Milley, observing, “I think Gen. Milley’s silence on the White House call when questioned about the ‘how’ is a reflection of, he gave his best military advice and it wasn’t heeded by the politicians.”

The White House on Sunday said little as the crisis unfolded on live TV. It did relay that Biden in the morning met with Vice President Kamala Harris and his national security team in a video conference. Underscoring the sense that the U.S. was caught by surprise, the White House then released a photo of Biden on his retreat at Camp David, staring pensively at officials on a monitor, surrounded by empty seats.

Biden plans to remain at Camp David on Monday, according to his White House schedule.

Biden issued a lengthy statement on Saturday, before Kabul fell, laying out five points of action in response to the rapid takeover, which included communicating to Taliban representatives that the U.S. would swiftly retaliate to any acts that put U.S. personnel at risk.

Biden laid part of the blame for Afghanistan’s collapse on the Trump administration, saying he had inherited a situation where troops had been drawn down to just 2,500. The president also stressed that he didn’t want to pass on this “forever war” to a fifth president.

“The question is, did the Biden’s administration execute in the best way possible, given the circumstances they were given?” Murphy asked. “I think that question is for the history books.”