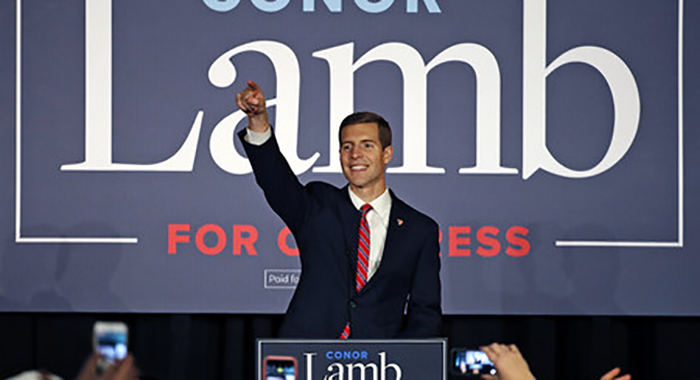 Rep. Conor Lamb is launching his long-expected Senate bid in Pennsylvania Friday, joining the crowded Democratic field in a state that is critical for the party as it seeks to protect or expand its narrow Senate majority.

Lamb, 37, a Marine and former prosecutor, rose to prominence when he won a nationally-watched House special election in 2018 months before the party flipped control of the chamber. He won reelection in 2018 and narrowly captured a second full term last year. Lamb, in an interview prior to his official launch, highlighted his string of competitive House victories as a strength in the Senate race, and said he’s running because he’s grown frustrated by House-passed legislation that falls flat in the upper chamber.

“A single Senate seat in the Democratic column at this point would make a huge difference in our ability to get things done,” Lamb said. “I want to be part of that. I think the House campaigns that I’ve had — I ran three in a very short period of time that were very hard, that had [then-President Donald] Trump personally involved every time — and I think that has prepared me uniquely for this race.”

Pennsylvania is critical for Democrats’ Senate hopes in next year’s midterms. They are defending four vulnerable incumbents, all in states President Joe Biden carried, and are on offense in two Republican-held seats Biden won: Pennsylvania and Wisconsin. GOP Sen. Pat Toomey is retiring, and Republicans have a competitive primary to replace him.

Lamb is hosting an event at a union hall in Pittsburgh on Friday to officially announce his candidacy. In a video previewing his campaign launch, Lamb says the “other side denies reality and worships Trump.” He said Democrats needed to “build on our majority” and called Pennsylvania “the most important Senate seat in the country.”

Fetterman has built a substantial lead in fundraising, but Lamb will join the race with the second-most cash on hand of the primary field. Fetterman had $3 million in the bank as of June 30, while Lamb has nearly $1.8 million, Arkoosh has $632,000 and Kenyatta has $282,000, as of the most recent Federal Election Commission reports.

Lamb, a centrist House member who represents a Pittsburgh-area district Biden carried narrowly, has been critical in the past of the more liberal wing of the party, particularly on issues like defunding police, which he has said put strain on members in battleground districts. His candidacy provides a contrast to the current field, with Fetterman and Kenyatta in particular running on more progressive campaign messages.

Lamb said there are issues such as law enforcement where he’s more moderate, but also touted his record backing campaign finance reform and supporting union rights as “economically progressive positions.” Lamb said this spring the Senate should ditch the filibuster after Republicans blocked a bill to establish an independent commission to investigate the Jan. 6 riots at the Capitol.

In the interview, he called the party’s Covid relief legislation the “most progressive piece of legislation that we’ve ever passed in a generation” and said his record “puts me somewhere in the middle of where we are as a party” in the state.

“The way we did it was by choosing Joe Biden as our nominee and then electing him, and then returning people like me back to the House so that we would be the majority,” Lamb said. “We can achieve very, very progressive results if we’re open-minded about the people we want to elect, and we have a teamwork frame of mind.”

Republicans also have a competitive primary for their nomination to replace Toomey. Businessman Jeff Bartos, veteran Sean Parnell — who lost to Lamb in a House race last year — former Ambassador Carla Sands, attorney Sean Gale and former congressional nominee Kathy Barnette are all running, as are a handful of other candidates.