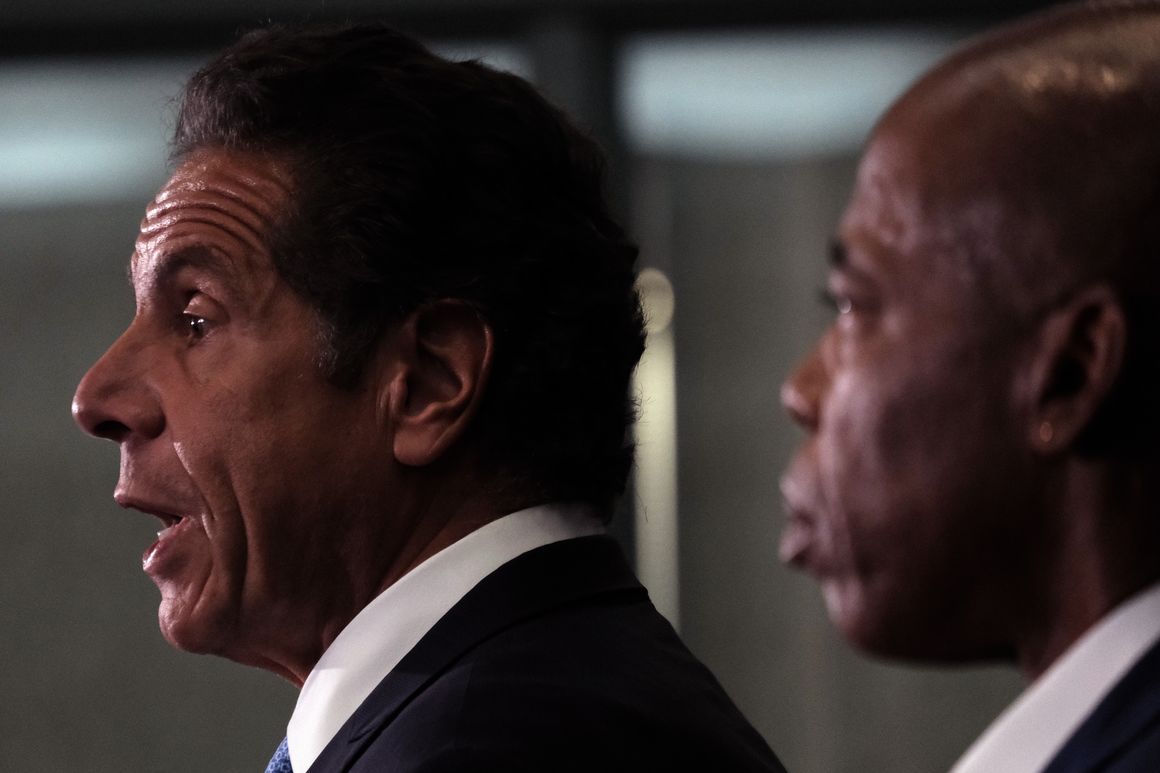 Gov. Andrew Cuomo faced a deluge of new calls for his resignation or impeachment Tuesday after the release of a damning attorney general’s report that found he sexually harassed multiple women under his employ.

The investigation directed by state Attorney General Tish James found that Cuomo sexually harassed 11 women, including an executive assistant whose breasts and buttocks he groped and a state trooper on his detail he touched inappropriately. The report concluded the governor broke state and federal laws.

After its release, many who had months ago said they would hold judgment until the report was released, joined those who have been calling for Cuomo’s ouster since the allegations first surfaced.

Reps. Hakeem Jeffries, Greg Meeks and Tom Suozzi — among the few members of the New York Congressional delegations who had not previously called for Cuomo to resign — said he must step down.

“The office of Attorney General Tish James conducted a complete, thorough and professional investigation of the disturbing allegations against Governor Andrew Cuomo. The investigation has found that the Governor engaged in abusive behavior toward women, including subordinates, created a hostile work environment and violated state and federal law,” the three Democratic members of Congress said in a joint statement.

“We commend the brave women who came forward and spoke truth to power. The time has come for Governor Andrew Cuomo to do the right thing for the people of New York State and resign,” they said.

Another erstwhile ally, former Council Speaker Christine Quinn joined the call for Cuomo to step down, saying, “I am deeply saddened and disgusted by the findings.”

Cuomo’s own environmental commissioner tweeted Tuesday that the governor’s actions were unacceptable, though he stopped short of calling for him to resign.

“All of this behavior is outrageous and unacceptable and unbecoming of a public official— or any person,” Basil Seggos said. “I’m in awe of the strength of these women. Enough.”

Even Lt. Gov. Kathy Hochul — who would take over as governor should Cuomo be removed before his term expires — chastised the governor’s behavior.

“The Attorney General’s investigation has documented repulsive and unlawful behavior by the Governor towards multiple women. I believe these brave women and admire their courage coming forward. No one is above the law,” she said in a statement. “Under the New York Constitution, the Assembly will now determine the next steps.”

She declined to comment further on the Assembly’s impeachment process “at the moment,” citing her position as first in the line of succession.

Mayor Bill de Blasio, who has previously called for Cuomo to resign, on Tuesday backed the governor’s immediate impeachment. A dozen members of Congress said the same, if Cuomo does not resign.

“It is beyond clear that Andrew Cuomo is not fit to hold office and can no longer serve as Governor. He must resign, and if he continues to resist and attack the investigators who did their jobs, he should be impeached immediately,” de Blasio said.

Brooklyn Borough President Eric Adams, the likely next mayor of New York who appeared alongside Cuomo at a joint press conference last month, also called on Cuomo to be impeached — something he has stopped short of calling for until Tuesday.

“Attorney General James conducted a thorough and revealing investigation that yielded disturbing conclusions about the conduct of Governor Cuomo,” Adams said in a statement. “It is now the duty of the New York State Assembly to take swift and appropriate action and move forward with impeachment proceedings if the Governor will not resign.”

The report drew many longtime critics to renew their calls for Cuomo to be removed from office if he does not go willingly.

Cuomo denied many of the report’s findings, saying he never touched anyone inappropriately and specifically denying an aide’s allegations that he groped her under her shirt at the executive mansion.

Cuomo faced a host of calls for his resignation from most of the state’s top Democrats in March, but refused to leave office.

On Tuesday, Sens. Chuck Schumer and Kirsten Gillibrand again called for him to quit.

“The New York State Attorney General has conducted an independent, thorough and professional investigation that found the Governor violated state and federal law, had a pattern of sexually harassing current and former employees, retaliated against at least one of the accusers and created a hostile work environment,” Schumer, the Senate majority leader, and Gillibrand said in a statement.

“No elected official is above the law. The people of New York deserve better leadership in the governor’s office. We continue to believe that the Governor should resign.”

“It is clear that he engaged in inappropriate, unlawful and abusive behavior,” the House members said.

“The Attorney General’s report is deeply disturbing, clear and thorough. For the good of New York State, Andrew Cuomo must resign. If he does not, the New York State Assembly must begin impeachment proceedings,” they added.

The group cited Cuomo’s own statement from 2013 calling for the resignation of then-Assemblymember Vito Lopez over sexual misconduct allegations, saying there must be a “zero tolerance policy” toward sexual harassment. “We agree,” the members of Congress said.

Senate Majority Leader Andrea Stewart-Cousins reiterated her call for Cuomo’s resignation. “As I said, when these disturbing allegations first came to light, the Governor must resign for the good of the state,” she said. “Now that the investigation is complete and the allegations have been substantiated, it should be clear to everyone that he can no longer serve as Governor.”

Assembly Speaker Carl Heastie, who is in charge of an impeachment probe against the governor, said the findings of the AG’s investigation show someone who is “not fit for office.”

“We have received the Attorney General’s 168 page report containing findings of sexual harassment and misconduct committed by Governor Cuomo,” Heastie said. “The findings contained in the report are disturbing. The details provided by the victims are gut-wrenching. Our hearts go out to all the individuals who have had to endure this horrible experience. The conduct by the Governor outlined in this report would indicate someone who is not fit for office.”

Bill Mahoney contributed to this report.