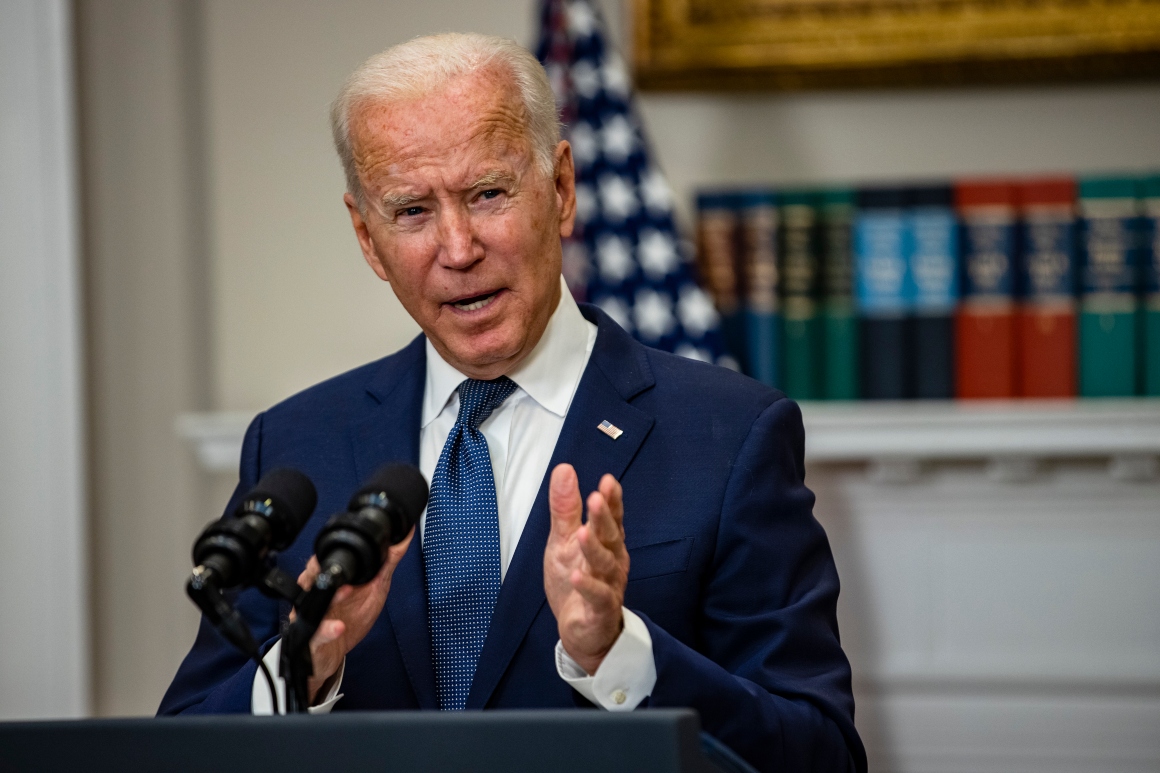 If Joe Biden’s withdrawal plan from Afghanistan has appeared chaotically rushed, it’s a product of his own making.

The White House has been clear for weeks that there wouldn’t be a “mission accomplished moment” to end America’s longest war. But after initially pushing back the timeline to pull out of the country, the president had been adamant about marking the war’s end by a date certain: Aug. 31. And it quickly became the latest example of how the White House’s devotion to deadlines can backfire.

“Deadlines serve a purpose. They are motivational. They bring focus,” said David Axelrod, a senior strategist for former President Barack Obama. “They also can be treacherous and hard to keep, especially in complex situations. And that can come back to bite you.”

Until last week, Biden’s Afghanistan policy had been defined as a rigid adherence to his withdrawal deadline. And that insistence opened him up to a wave of criticism for being both shortsighted and politically motivated — the withdrawal was timed to mark the 20th anniversary of the Sept. 11 attacks that effectively triggered the war.

Biden’s resolve seemed to recede a bit on Sunday night when, in response to two consecutive questions about his Aug. 31 deadline, he said his “hope” was to “not have to extend” it.

“But,” he added, “there are going to be discussions, I suspect about how far along we are in the process.” Administration officials point to the thousands of evacuations that have taken place in the past few days as an example of their agility.

It wouldn’t be the first time in recent months that the White House has blown through a major deadline of its own creation: the administration missed its July 4 benchmark to vaccinate 70 percent of American adults against Covid-19 with at least one shot. That miss has since come to symbolize the larger problems the administration has faced in containing Covid.

The president’s setbacks in Afghanistan and in corralling the coronavirus were due, in part, to intelligence failures and unanticipated variables. The rapid pace with which the Taliban took control of Afghanistan defied many of the predictions from top Biden officials. And the surging cases of the Delta variant — alongside entrenched vaccine hesitancy of a large swath of the public — similarly took hold much faster, and with more force, than officials anticipated.

Yet in close succession, they represent threats to Biden’s reputation as a steady hand with institutional wisdom that helps him to see around corners. And they have complicated his carefully planned agenda and forced him to answer for having come up short.

For days, the White House sought to contain the fallout over Afghanistan, with administration officials saying that they are intensely focused on extracting Americans and vulnerable Afghans from the country. On Sunday, Biden said the U.S. military has extended access around the international airport in Kabul, and took a somewhat softer tone as he acknowledged the humanitarian consequences of the U.S. pullout. “There is no way to evacuate this many people without pain and loss, of heartbreaking images you see on television,” he said. “It’s just a fact. My heart aches for those people you see.”

Biden’s aides have complained the news media is sensationalizing the problems in Afghanistan and too focused on the process — including fixating on dates. They have said some of the coverage is out-of-step with most Americans, who support a pullout from the 20-year-long war.

A new NBC poll, however, complicates that argument. In the survey, the majority of those asked did say they supported leaving Afghanistan. But only 25 percent approved of Biden’s handling of the withdrawal. It’s yet another ominous sign politically for the president, whose approval had slipped below 50 percent before the Afghanistan turmoil erupted.

Biden’s deadlines have become a hallmark of his tenure in office and his campaign. Having spent more than three decades on Capitol Hill, where deadlines — more than any other motivator — determine the action, an explicit emphasis on the calendar is ingrained in nearly everything the president does.

A White House official said the July timeframe was used to speed vaccinations, helping achieve a marked increase in the number of shots in arms. The official added that Biden had previously articulated the need for the Afghanistan timeframe. The thinking was that if the U.S. had not set that deadline, the Taliban would have begun another offensive, necessitating a surge of thousands of more American troops into harm’s way.

In the end, the United States had to surge troops anyway, to help provide security for a rushed evacuation the administration had not envisioned. And they may still be there for an undetermined amount of time after Aug. 31.

The Biden White House had a much different experience with the first major deadline of his presidency, which Biden set even before he was sworn in — promising that under his administration 100 million vaccinations would be administered in his first 100 days in office. He met that and then some, by March announcing a new benchmark — doubling it to 200 million — which the administration again met before they even reached the 100-day mark.

“Today, we hit 200 million shots on the 92nd day in office,” a triumphant Biden declared on April 21. “Two hundred million shots in 100 days — in under 100 days, actually. It’s an incredible achievement for the nation.”

That bravado set expectations for his next major deadline — getting at least one shot in the arms of 70 percent of adults 18 and older by the Fourth of July. As the date loomed, it was clear the pace of vaccinations would not keep up and he’d fall short of the goal. While the administration made significant progress — reaching 67 percent of adults — their inability to hit their own goal portended a dark turn for the pandemic and gave critics an opening.

“This administration’s attitude was, ‘We’ve got this. We’ll have the vaccinations done by July 4. Everything’s going to be normal,’” said Karl Rove, the veteran Republican strategist who worked for George W. Bush. “That was a grave mistake. In reality, nobody knows whether or not that could happen, but the fact he said it would caused people to raise their expectations.”

Indeed, Biden just last month had trumpeted the country “emerging from one of the darkest years in our nation’s history into a summer of hope and joy.” But then he added, “Hopefully,” allowing that his words were more reflective of his optimism than hard fact.

Now the delta variant’s rapid spread is throwing into doubt another of his big goals: Having schools open for 100 percent in-person instruction this fall.

Blown deadlines aren’t always so harmful, particularly when the stakes are less severe. During the vice presidential sweepstakes, Biden breezed past at least two major deadlines before choosing his running mate. He allowed so much time to pass that close allies of several of the women were able to circulate negative tidbits designed to dent the image of their rivals, creating the precise public pageant that Biden had been trying to avoid.

Biden urged Congress to pass police reform by May 25, the anniversary of George Floyd’s murder by police in Minnesota. That deadline came and went. He missed the deadline to impose requisite sanctions on Russia for the poisoning of opposition leader Alexei Navalny. There also were lapsed deadlines on climate, commissions and mask standards. And he reset the May 1 target to pull out of Afghanistan to Sept. 11, before ultimately moving it to Aug. 31, acknowledging in July 8 remarks on the planned drawdown of U.S. forces that the Taliban was at its strongest since 2001.

“The worst deadline you can set is ‘as soon as possible,’” said Christopher Cox, the author of “The Deadline Effect,” a new book on the power of deadlines. “Because that is the one that gets pushed the most. It sounds very urgent, but actually has the effect of making things so abstract that you don’t make concrete progress towards your goals.”

Cox, who has been tracking Biden’s biggest deadlines, said it’s far wiser for the president to “keep setting goals and deadlines that they miss then to keep things more open-ended and fall even further behind.”

White House deadlines designed to spur progress on Capitol Hill on infrastructure negotiations ultimately helped forge a breakthrough on a massive bipartisan package. The urgent push called for Biden pivoting from the first group of Republican senators to a second to secure the deal.

In other areas, Biden’s own deadlines have run up against other branches of government or his own bureaucracy, impeding his ability to meet them. Indeed, administration officials in areas involving the Department of Justice and public health point to his promises to let subject-matter experts determine the best course of action as the reason for slower action.

The president’s desire to issue public expiration dates is a contrast to his predecessor, President Donald Trump, who didn’t so much set deadlines as offer arbitrary dates and then bluster his way straight through them. Trump’s “Infrastructure Week” quickly became a running joke; he repeatedly promised a Republican health care plan to replace Obamacare and a GOP middle-class tax cut ahead of the 2018 midterm elections that never materialized. Even when he did give a timeline, such as for decisions on the Paris climate accord, infrastructure, and a plan to confront ISIS, Trump resorted to a throwaway line: “I would say over the next two or three weeks.” And, as Biden’s advisers repeatedly note, it was Trump’s own deadline on Afghanistan that set in motion the rocky pullout that’s now occurring under Biden’s watch.

Defenders of Biden’s Afghanistan policy insist he was put in a nearly impossible position and they don’t fault him for trying to keep to his timeline, despite the dawning reality that aspects of the mission will take longer.

“We probably lost that war 15 years ago. And yet, nobody was willing to make the hard choice to actually withdraw the troops. He could have extended the deadline to 2050 and you would have seen, I think, the same collapse and chaos,” said Paul Begala, the Democratic strategist and White House veteran. “I know I’m in a distinct minority here of pundits, but I think I’m in the solid majority of Americans who think he’s doing exactly the right thing in getting us the heck out.”

But numerous Democrats stress that equating support for a full withdrawal of troops in Afghanistan and wanting to avoid the dangerous scenario that’s playing out on the ground today essentially obscures the issue.

“This isn’t about the actual deadlines, per se. It’s about getting out and doing the job well. And the chaos that everybody has witnessed has shown anything but doing a good job,” said Mary Anne Marsh, a Democratic strategist. “So the deadline shouldn’t drive what Biden is doing — how he’s doing it should drive the deadline. Whatever he needs to do to get the job done in terms of timing, he should take it — but get the job done and do it well. Everyone supports that.”