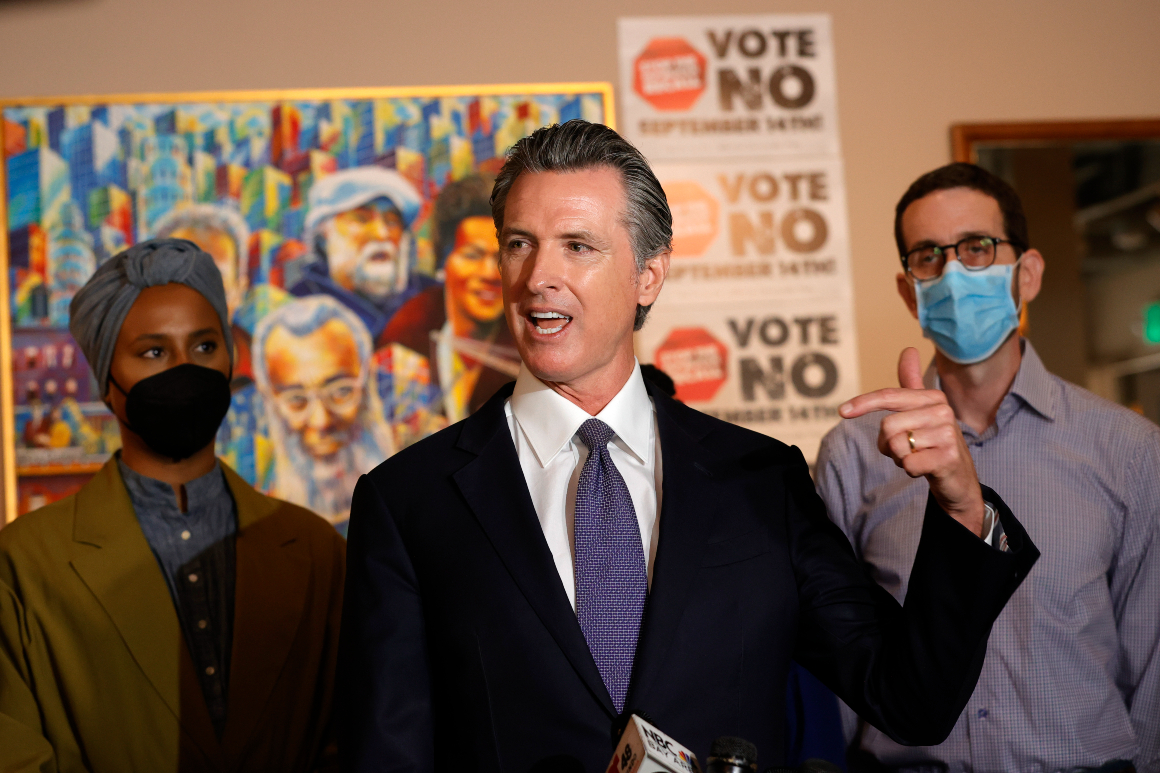 OAKLAND — Democratic activists working to save Gov. Gavin Newsom from being thrown out of office by California voters next month are seizing on an issue better known for energizing voters on the right: abortion access.

Fearful of widespread voter apathy, Democrats and their allies are hammering the message that a GOP governor could veto abortion-rights laws, cut funding for clinics and appoint anti-abortion agency officials, judges and senators in a state that’s long been at the forefront of making it accessible to terminate a pregnancy.

Abortion rights groups like Planned Parenthood and NARAL, as well as the newly formed Women Against the Recall, are phone banking, knocking on doors, posting digital ads and social media messages and holding events with Newsom and other lawmakers as ballots are mailed to voters over the next few weeks ahead of the Sept. 14 recall election.

“As much as people in California support these rights, you can see by the polls that we’ve become a little complacent about what that actually means,” Jodi Hicks, president and CEO of Planned Parenthood Affiliates of California, said in a livestreamed conversation Wednesday night that was part of the organization’s anti-recall campaign.

Conservatives have historically had more success in firing up their base on the issue of abortion — and using it in particular to turn out disengaged voters in off-year elections.

Deep-pocketed anti-abortion groups like Susan B. Anthony List that threw their weight behind Donald Trump in 2016 and 2020 are already in the field in Georgia and Arizona, working to unseat vulnerable Democratic senators in next year’s midterms to flip control of the upper chamber.

Abortion rights organizations have also invested millions in get-out-the-vote work, but Democrats have split in recent years. Some insist the party should avoid focusing on abortion over fears of alienating moderates and feeding into GOP attempts to brand them as “baby killers,” while others have been urging candidates to lean into the issue.

The California recall may well flip that pattern.

Newsom himself is highlighting the stakes of the election for abortion rights on the campaign trail. He appeared with Planned Parenthood Wednesday night to tout his record on protecting reproductive rights and warn of how an anti-abortion governor could reverse it.

“The governor has the line-item veto,” he said. “You can literally draw a line and cut these issues out. You have the power of appointments. I mean think of how you can weaponize that.”

In particular, Newsom stressed that his leading opponent, conservative talk show host Larry Elder, “doesn’t believe in Roe.” Elder said in a July radio interview with San Francisco-based KQED that Roe “one of the worst decisions that the Supreme Court ever handed down.”

Planned Parenthood, NARAL and other groups, which have long been supportive of Newsom, are working overtime to amplify this message. Planned Parenthood has contributed more than $12,000 so far, with NARAL chipping in $10,000 to thwart the recall, according to campaign donations filed with the secretary of state. The group “Women Against the Recall” is mobilizing as well, citing abortion rights as one of the primary reasons to keep Newsom in office.

“This is all hands on deck,” said Rep. Barbara Lee (D-Calif.), a co-leader of the group and of Congress’ Pro-Choice Caucus. “California is a progressive state, but only if people turn out.”

Anti-abortion organizations have been quieter in the leadup to the election. Newsom’s opponents and GOP-supporting groups are largely skirting the issue, instead choosing to hammer the governor on his handling of the economy and Covid-19. One of the leading Republican candidates, former San Diego Mayor Kevin Faulconer, supports abortion rights but has not made that a prominent feature of his campaign.

GOP strategist Rob Stutzman, who advised former Gov. Arnold Schwarzenegger in the state’s 2003 recall election, said it’s in Republicans’ interest to make the race about the pandemic response, crime, homelessness and other quality-of-life issues — not abortion.

“Pro-life voters, I think at this point, are fairly resigned to the fact there’s really not much that could be done in a state like California with a Republican governor, given the Legislature,” Stutzman said, referring to the state’s Democratic supermajority. “If they thought they could find an advantage there, I think they’d be talking about it.”

A Republican governor’s powers over abortion in California would be limited, considering the makeup of the Legislature and the state’s statutory and constitutional protections for reproductive rights. But a governor could still cut state funding to clinics that provide abortion, or veto legislative proposals to expand access, said Laurie Sobel, an attorney and associate director of women’s health policy for the Kaiser Family Foundation.

“It’s more of these issues around funding that the governor could have power over, rather than the fundamental right to abortion,” she said.

The governor’s role is critical, said state Sen. Sydney Kamlager (D-Los Angeles), who has authored legislation to expand abortion access. “You can have a two-thirds majority in both of those houses, but if you have a governor who doesn’t care about your body, your womb or your choice, then none of that makes a difference,” she said.

When Planned Parenthood and other clinics faced federal funding cuts from the Trump administration’s changes to the Title X family planning program, Newsom in 2019 doubled state budget investments in reproductive health services. He also signed legislation requiring California’s public university campuses to offer medication abortion at student health centers by 2023 and issued a “proclamation on reproductive freedom” in 2019 that encouraged people in states with more restrictive abortion laws to travel to California for the procedure.

Essential Access Health, the network of clinics providing family planning and reproductive health services in the state, is not engaging in the recall campaign, but it is analyzing what its outcome might mean for the thousands of patients who come to them for abortions, contraception, STD screenings and other services.

“If there’s a shift at the highest level of leadership, we could anticipate that at the bare minimum, the gains we have made over the last several years could be stalled, if not reversed,” said Amy Moy, the chief external affairs officer for the organization, pointing in particular to the budget blueprints governors release and the power to appoint agency officials. “We saw during the Trump administration an exodus of career civil servants with institutional knowledge. If the recall is successful, we could see a similar situation in California.”

Two more factors are upping the ante. One is the possibility that the state’s 88-year-old senator Dianne Feinstein could step down or retire before the end of her term, putting Democratic control of the now 50-50 Senate in jeopardy. The other is the Supreme Court’s decision to revisit Roe v. Wade this fall and potentially overturn it next year, which is expected to dramatically increase the already sizeable number of people who travel from more conservative states to California for an abortion.

In a press briefing earlier this month, abortion rights advocates worked to drive that message home.

“The reality is if we have a Republican in the governor’s mansion and something, God forbid, were to happen to our sitting state senator, Dianne Feinstein, and we were to have a governor then appoint that position, it could be Georgia who helped us win the U.S. Senate and California somehow that helps us lose the U.S. Senate,” warned Shannon Olivieri Hovis, the director of NARAL Pro Choice California. “We need to not take anything for granted as it relates to California’s leadership and the impact that California has across this nation.”

Should the emphasis on abortion rights to mobilize Democratic voters prove successful in defending Newsom, groups are hoping to replicate it in other races, and are urging candidates not to be afraid of the issue.

“Abortion access and reproductive freedom is a real mobilizer,” said Andrea Miller, president of the National Institute of Reproductive Health.

Miller and other advocates argue that it’s a winning playbook even outside the progressive California bubble, and are looking particularly at Virginia, where former Democratic Gov. Terry McAuliffe will face off for his old seat with Trump-endorsed Republican Glenn Youngkin later this fall.

“We’re anticipating that Youngkin’s opposition to abortion will be a millstone around his neck,” she said.