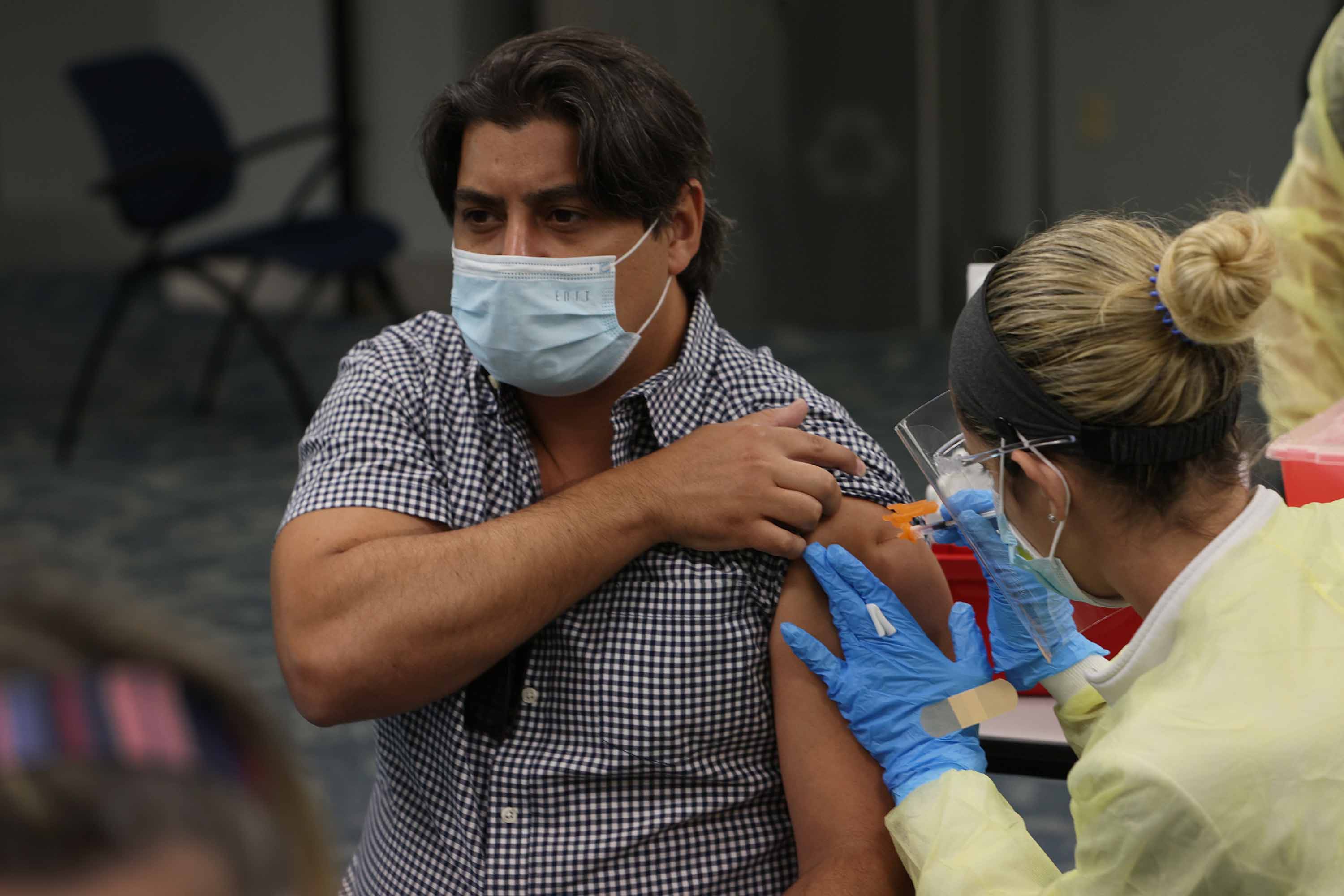 The Food and Drug Administration has approved Pfizer and BioNTech’s Covid-19 vaccine for people 16 and older — making it the first to be fully licensed for use in the United States.

FDA’s decision to fully approve the shot will make it easier for universities, hospitals and other workplaces to require vaccination against the coronavirus, and it is a crucial step toward enabling the Biden administration’s plan to offer booster shots for adults beginning in September. Public health experts also hope the approval will convince a significant number of vaccine holdouts to get the shot, boosting the country’s vaccination rate as it battles the highly contagious Delta variant.

Within hours of the announcement Monday, the Pentagon said it would accelerate plans to mandate vaccination for active-duty troops, and New York City said it would require vaccination for all teachers ahead of the new school year. Several companies and universities have announced plans for mandates that would be triggered by FDA’s full approval of Covid shots.

“The FDA’s approval of this vaccine is a milestone as we continue to battle the COVID-19 pandemic,” acting FDA Commissioner Janet Woodcock said in a statement. “While millions of people have already safely received COVID-19 vaccines, we recognize that for some, the FDA approval of a vaccine may now instill additional confidence to get vaccinated.”

Pfizer CEO Albert Bourla also expressed hope that the full licensure would increase confidence in the shot. More than 204 million doses of the shot have been administered to people in the United States since it received emergency authorization late last year, and the vaccine is in wide use globally.

“Today’s approval for those aged 16 and over affirms the efficacy and safety profile of our vaccine at a time when it is urgently needed,” Bourla said in a statement. “I am hopeful this approval will help increase confidence in our vaccine, as vaccination remains the best tool we have to help protect lives and achieve herd immunity.”

From a scientific standpoint, the approval is virtually meaningless given that the shot has been given to hundreds of millions of people worldwide, said Paul Offit, a vaccine expert at the University of Pennsylvania and a member of the FDA’s vaccine advisory panel.

“The full approval is not a giant leap from the emergency-use authorization for the simple reason that we have an enormous amount of information on this vaccine that has been given to half of the American public,” he said. “You know it’s safe, you know it’s effective, you know that it’s manufacturing consistently.”

But John Moore, a virologist at Weill Cornell Medicine, said that he expects the Pfizer-BioNTech approval will motivate some people who had been hesitant to get vaccinated to seek out shots.

“I think a substantial number of people will be stepping up and taking the vaccine now that there’s full approval,” he said. “Employers, a significant number of them, are going to have more legal and moral confidence in putting in vaccine mandates, and that may turn out to be the bigger issue than the individuals.”

It’s not clear how large any vaccination bump will be. Recent polling from the Kaiser Family Foundation found that about 30 percent of unvaccinated people said they would be more likely to get a fully approved vaccine than one with emergency authorization.

“Fifteen percent of Americans are in the QAnon mode, and they’re just not going to pay any attention to any of this stuff,” Moore said. “That’s around 50 million adults ballpark. But it’s the soft refusers, the hesitant — and there are maybe 10, 20, 30, 40 million of those who could now be convinced.”

Others will face mandates that could force the issue. The Pentagon said Monday that it will now mandate Covid-19 vaccinations for all 1.4 million active-duty troops, citing the Pfizer approval. Defense Secretary Lloyd Austin earlier this month announced that he would seek to make the Covid-19 shots mandatory for the armed forces by mid-September. Only about 30 percent of active-duty troops had been vaccinated as of early August.

Pentagon officials are still working out the details about which vaccines will be mandated and by when, according to a defense official. Austin is considering asking the president for a waiver to mandate the vaccines from Moderna and Pfizer, which FDA has authorized but not fully approved, the official said. A national security law requires a presidential waiver to mandate a vaccine for troops that is under emergency-use authorization.

In addition to full approval for those 16 and older, the vaccine is authorized for emergency use in teens 12 to 15. Pfizer and BioNtech are studying the shot’s safety and efficacy in younger children and infants. If all goes well, they are expected to seek emergency authorization for 5-to-11-year-olds this fall.

Another vaccine maker, Moderna, is not far behind. It applied to FDA in June for full approval of its Covid-19 shot, which the agency authorized for people 18 and older late last year. The company is also seeking emergency authorization to use the vaccine in teens 12 to 17, and it is running clinical trials of its vaccine in kids as young as six months.

“Full FDA approval of the Pfizer vaccine is another step forward – to convince more people to get vaccinated, to facilitate mandates, and to save more lives,” tweeted Tom Frieden, who led the Centers for Disease Control and Prevention during the Obama administration. “Moderna’s full approval shouldn’t be far behind – just a matter of timing and paperwork.”

Johnson & Johnson, the third company with a Covid-19 shot in use in the U.S., has said it will seek full approval later this year.

The Pfizer-BioNTech shot is the first based on mRNA technology to be fully licensed by FDA for any disease. It uses snippets of mRNA, a type of genetic material, to instruct human cells to pump out harmless copies of the coronavirus’s spike protein. The body’s immune system reacts by making antibodies to the spike protein that protect against infection by the virus.

The U.S. government has purchased 500 million doses of the Pfizer vaccine for use at home, and another 500 million that it plans to donate to countries in need.

FDA earlier this month authorized third doses of the Pfizer and Moderna vaccines for people with compromised immune systems, including recipients of solid-organ transplants. The Biden administration plans to offer booster doses starting Sept. 20 to adults who received either of the two mRNA vaccines at least eight months ago. The CDC’s vaccine advisory committee is expected to meet this week to discuss the booster plan.

The FDA’s decision to fully license the vaccine could see some physicians and patients circumvent that plan, however. Like other fully approved drugs and vaccines, the Pfizer-BioNTech shot can be prescribed “off label” for unapproved uses — which at the moment include boosters for people who are not immunocompromised, or initial vaccination for children under 12.

In a statement Monday, the American Academy of Pediatrics said it “strongly discourages” off-label Covid shots for kids 11 and younger, in part because the adult dose is much higher than dose now being tested in pediatric clinical trials. The results of those studies are expected as early as next month.

In a call with reporters, Woodcock said that the vaccine is “being distributed under a provider agreement with the CDC and so providers agree to conform to certain conditions,” suggesting that could limit off-label use. She referred questions on the matter to CDC.

The initial two-dose regimen of the Pfizer-BioNtech vaccine was 95 percent effective in a late-stage clinical trial. The two companies recently released a study that showed that the vaccine’s effectiveness decreased to about 84 percent within 4-6 months after the second dose. But recent real-world studies have suggested that the standard two-shot regimen is less protective against the Delta variant than it was against earlier versions of the virus, prompting the call for boosters in the U.S. and other countries.

Side effects are generally mild. Federal regulators in June began investigating reports of heart inflammation among vaccine recipients. The Centers for Disease Control and Prevention’s vaccine safety panel ultimately determined there was a “likely association” between the vaccine and the heart issues, which have generally been rare and short-lived.

As part of its approval decision, the FDA is requiring Pfizer and BioNTech to conduct post-marketing safety studies further examining the risks of heart inflammation in vaccine recipients. The companies have also said they will undertake a post-marketing study to track outcomes in people who get the vaccine during pregnancy, and their resulting babies.