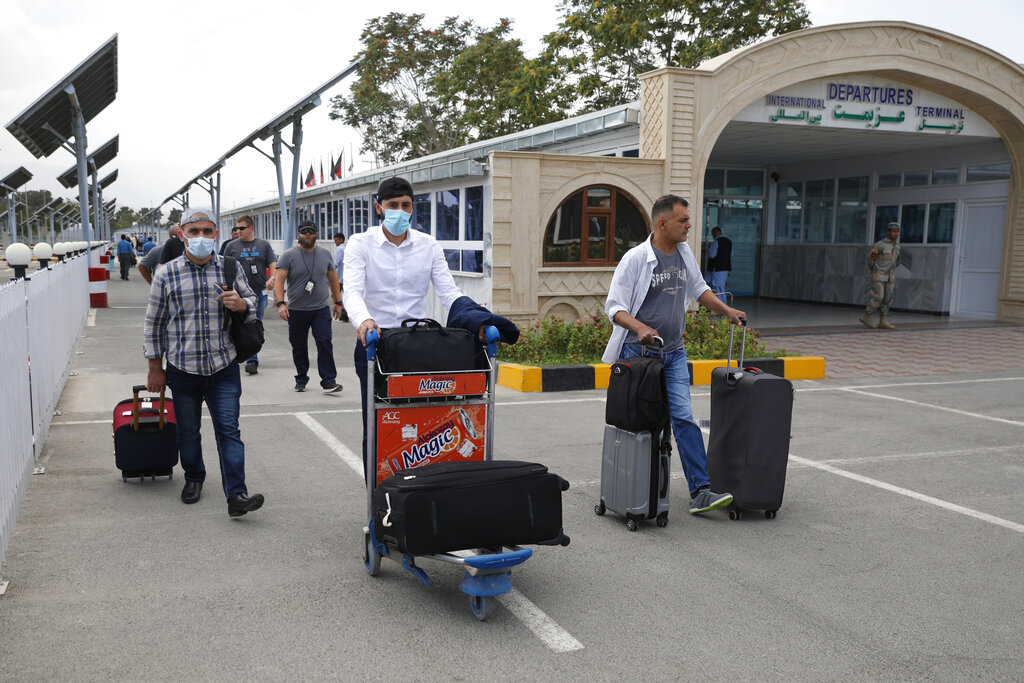 As U.S. troops evacuate diplomats from Kabul this weekend, a frantic effort is also underway behind the scenes to rescue Afghan interpreters and other local partners and their families before they are executed or otherwise punished as collaborators by the Taliban.

In a flurry of texts, phone calls and emails to members of Congress, Pentagon and State Department colleagues — and anyone in their network who may have contacts who can help — military and diplomatic veterans are pulling out all the stops to try to save Afghan friends and colleagues either awaiting evacuation by the State Department or whose applications for a special immigrant visa remain in bureaucratic limbo.

“The situation is extremely desperate,” said Mariah Smith, a retired U.S. Army officer who did three tours in Afghanistan. “I am heartbroken over the ones we can’t help.”

Smith is rushing to buy up seats on the few commercial airlines still flying out of Kabul International Airport on behalf of No One Left Behind, a non-profit dedicated to assisting Afghan and Iraq interpreters.

”If Kabul falls, we need to get more aircraft with seats into Kabul airport,” she said. “We are struggling, too, with people whose visas are not quite ready. If we could just get them somewhere to safety for a few weeks, I think we could financially find the way to support them for a little bit until we sorted out immigration or refugee status.”

In the past two weeks the organization has been able to spirit 40 Afghans and their families, or about 200 people, out of Kabul on commercial flights.

But they’re running out of time. President Joe Biden on Saturday dispatched an additional 1,000 soldiers from the 82nd Airborne Division to Kabul to help evacuate American diplomats via the airport. In all, 5,000 American troops have been assigned to the evacuation since Thursday — both in the country and on standby in the region.

“We need the administration to step up and evacuate the thousands of Afghans that are waiting to a safe third country,” Smith said.

The efforts come as the State Department on Saturday urgently requested assistance from humanitarian groups to help identify Afghans who assisted the U.S. and other foreign nations during the war who need to be evacuated. The names of vulnerable Afghans, as well as journalists and human rights activists, will be added to a list compiled by a government-wide coordination cell. Reuters first reported the State Department request.

The request has aid groups harried. “Everything’s in overdrive, it’s nonstop,” said Kim Staffieri, executive director of the Association of Wartime Allies, one of the organizations that received the request. “It’s utter chaos and we should’ve started three months ago.”

Staffieri and leaders of other groups POLITICO spoke with wondered why the administration isn’t sending evacuated Afghans to Guam, the U.S. territory whose leadership agreed to host evacuees.

Humanitarians demand more. The Biden administration “shouldn’t need a list” of Afghan special visa applicants, said Adam Bates, the policy counsel for the International Refugee Assistance Project. “The government already knows who they are and they should all be evacuated to safety immediately.” He and others expressed dismay at how long it took the administration to take this matter seriously.

The Kabul embassy’s consular section also wants information on American citizens trying to flee Afghanistan. “The U.S. Embassy is exploring options for U.S. citizens who want to depart and who have not been able to find a seat on commercial flights,” according to a “sensitive but unclassified” email obtained by POLITICO. “Embassy is soliciting information from U.S. citizens who may wish to utilize such options.”

With the Taliban advancing on the capital, the situation is growing more dire by the hour for Afghan allies who worked as interpreters or in other support roles, who fear they could be targeted by the Taliban as U.S. and NATO forces pull out.

But many working feverishly to get their contacts out of Afghanistan have little hope their efforts will succeed.

A former Marine in direct contact with those seeking refuge said that “it’s very apparent” that the planning to extract vulnerable Afghans “was all done last minute.”

He is telling those trying to get out now that Kabul is unsafe, and their best bet is to try to flee to a neighboring country. In the U.S., he said, “it’s the bureaucracy that seems unresponsive and that seems dysfunctional.”

Others said the situation is so dire they are seeking ways to bypass the bureaucracy, even as Kabul embassy staff brave the danger and continue to process applications.

Phil Caruso, a former Air Force officer and military adviser to the State Department who is also a board member of No One Left Behind, said at this late stage the only viable option is “getting hundreds of aircraft into Kabul and flying out anyone with a U.S. connection over the next 72 hours.”

A former State Department official who said he has also been fielding requests for help this weekend expressed frustration at the limited options. “There’s nothing I can do,” he said in an email.

He said he has considered trying to reach U.S. military officers in Kabul participating in the evacuation of U.S. personnel, or “people who fly the planes and can cram an extra few people onto existing flights.”

That, he added, “will be more productive and faster” than trying to get President Joe Biden “to sign something and get it to the bureaucracy via FLASH channels,” referring to an urgent presidential order that would still not likely be carried out swiftly enough.

Another former U.S. official who has also been working through the weekend trying to help extract Afghan partners expressed hope that something can still be done quickly.

“We now have a sizable presence on the ground,” the former official said. “This is an opportunity we should take advantage of. Maintain the makeshift embassy at Kabul International Airport to process as many visas as possible. Call for volunteers. It’s not too late to save as many people as possible.”