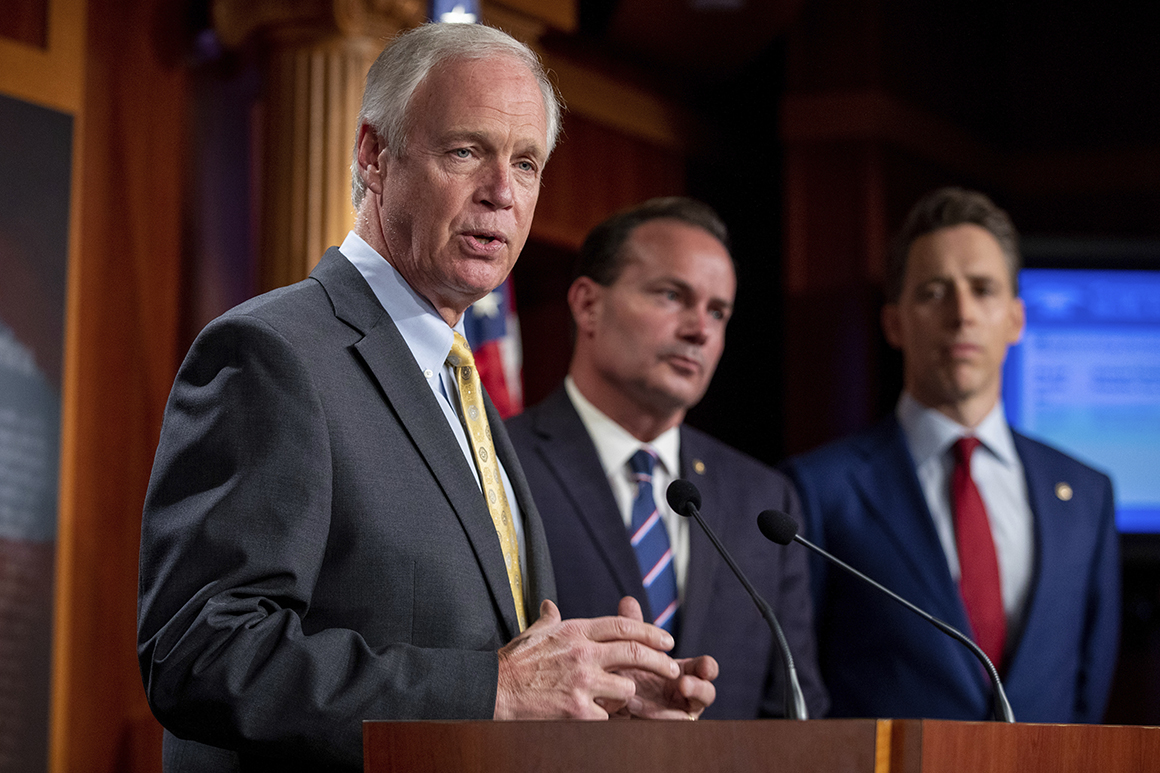 Ron Johnson’s got a piece of advice for Republicans who want him to run for reelection: Don’t work with Democrats on “crap” like the bipartisan infrastructure bill.

“I’m dead serious. This is not helpful. If you want to retain a U.S. Senate seat in Republican hands in Wisconsin, you don’t participate in passing Part One of the Green New Deal,” Johnson said in a recent interview. Summing up his mood as he mulls a third term, he added, “I’m not happy.”

Johnson’s decision, in a critical swing state won by President Joe Biden, is one of several inflection points that could reshape the battle for the Senate majority in 2022. In total, five senators haven’t yet made up their minds on whether to retire: four Republicans and just one Democrat, Patrick Leahy of Vermont.

The GOP is already defending five Senate seats opened up by retirements — two in the battlegrounds of Pennsylvania and North Carolina and three in GOP strongholds Ohio, Alabama and Missouri. Although Republicans are increasingly favored to win the House next year, further retirements would undoubtedly complicate their path back to power in the Senate.

Democrats say the hesitation will hurt Republicans next November.

“I would think that they would make a decision before this time. Because it takes time to put a campaign together. It’s unusual,” said Michigan Sen. Gary Peters, who chairs the Democrats’ campaign arm and just won a competitive reelection bid himself. “These are big races, and they’re going to be intense for everyone who is running. And delay usually puts you at a disadvantage.”

Johnson reiterated that he’s in no rush to decide as the Senate heads into a monthlong recess. And though he raised $1.2 million in the most recent fundraising quarter, he said that’s no sign of his intentions: “I didn’t lift a finger to fundraise … you can’t read anything into that.”

While Johnson’s state is the most competitive, the retirement of GOP Sen. Chuck Grassley would instantly make Iowa a tighter 2022 race. And if Sen. Lisa Murkowski (R-Alaska) bows out of a fourth term, some strategists privately worry that her state’s new election system could help Democrats compete in a reliably red area.

Then there’s Senate Minority Whip John Thune (R-S.D.), who has been targeted by former President Donald Trump and is in position to compete for eventually succeeding Mitch McConnell as GOP leader. Thune put his timeline this way: “I’m not in any rush.” Trump has threatened to primary him and attacked the Senate infrastructure bill; Thune voted against it this week.

Grassley has laid out the firmest timeline, saying in a recent interview that he’d decide by mid-October. The other four incumbents all replied that modern campaigns are too long and they are loath to start their reelection bids 15 months before Election Day.

National Republican Senatorial Committee Chair Rick Scott (R-Fla.) said he felt confident about retaining all four of his undecided incumbents: “I’ll be surprised if any of them retire.” Other Republicans say that by virtue of math it seems likely someone else heads for the exits.

“The indication from what most do here is: They’ll run again,” said Sen. Mike Braun (R-Ind.). “I would guess that three out of the four [Republicans] would end up running, including Johnson.”

Braun added that Grassley is a special case, considering his age of 87 years: “I know what I’d be doing. I’d be back on the farm picking weeds at least. Doing something. I would not be here.”

Grassley and Johnson have already drawn challengers back home, with a crowded primary field brewing on the Democratic side in Wisconsin. Former Rep. Abby Finkenauer (D-Iowa) is running for Grassley’s seat in Iowa, which has trended red in recent elections.

“I can only think about what my job is,” Grassley said. “I don’t pay any attention to what other people are doing.”

In Alaska, Trump is coming after Murkowski by endorsing conservative opponent Kelly Tshibaka. Some of the ex-president’s former advisers are helping the onetime Alaska Department of Administration commissioner in her bid to defeat Murkowski, who was a key negotiator on the bipartisan infrastructure bill Trump hates.

The state’s new top-four primary, followed by a ranked-choice general election, insulates Murkowski from a repeat of her 2010 primary loss thanks to resistance from hardcore partisans (she ended up winning the race as a write-in). But it also offers plenty of uncertainty, as former Republican Gov. Sarah Palin flirts with a Senate bid and Democrats search for a candidate who could consolidate their vote amid a split GOP.

“I believe that if I run, I will win. I don’t see that playing out any other way,” Murkowski said in an interview, shrugging off the choice ahead of her.

Vermont is as blue as it gets in congressional races, but even so there’s plenty of intrigue as Leahy makes up his mind. For one, Leahy could break the all-time record for Senate service if he wins another six-year term. He’s also in the line of succession now as president pro tempore, a post held by the most senior senator in the majority party. Combined with his Appropriations Committee chairmanship, Leahy’s seniority has helped him rack up some of the most coveted real estate in the Capitol, a security detail and a large staff.

Some Republicans hope that if Leahy bows out, popular Vermont GOP Gov. Phil Scott would consider running for the seat. Though the state votes Democratic in federal races, Scott has romped to a series of impressive wins in the Green Mountain State’s gubernatorial contests.

“Phil Scott has endorsed me. And the latest polls showed me ahead of everybody in the state,” Leahy said, reiterating he and his wife will make a decision on his political future while snowshoeing in Vermont this winter.