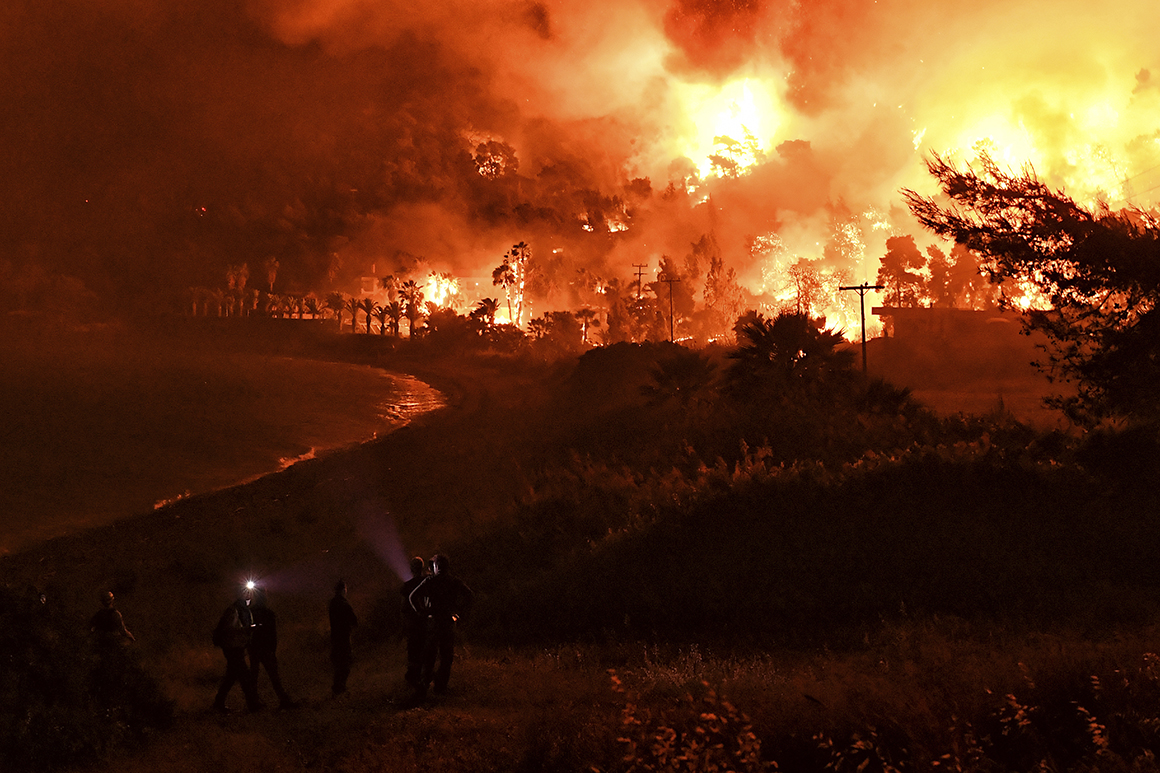 The long-feared era of disastrous climate change has arrived.

For the first time, the planet’s top scientists said in a monumental report released on Monday they have definitively linked greenhouse gas emissions to the type of disasters driven by a warmer climate that have touched every corner of the globe this year: extreme rainfall in Germany and China, brutal droughts in the western U.S., a record cyclone in the Philippines and compound events like the wildfires and heat waves from the Pacific Northwest to Siberia to Greece and Turkey.

This is the world as it exists today, with an atmosphere 1.1 degrees Celsius hotter than it was in the pre-industrial era. Even grimmer: There is no scenario in the new analysis by the United Nations’ Intergovernmental Panel on Climate Change in which the world avoids breaching the threshold of 1.5 degrees Celsius that the U.S., EU and several other countries have set as a target. Even the weaker 2-degree target that major polluters China and India have set as guideposts will be eclipsed unless greenhouse gas emissions peak by mid-century.

Those numbers have real-world consequences for billions of people, with cascading impacts on agriculture, human migrations and even wars, numerous studies in recent decades have warned.

An extreme heat wave that once would have occurred only twice a century would instead hit about every six years at the 1.5-degree threshold, the IPCC says. With 2 degrees of warming, you can expect them every four years.

“Human-induced climate change is already affecting many weather and climate extremes in every region across the globe,” the IPCC authors concluded in the summary to the report that brought 234 authors across 66 countries together to analyze more than 14,000 studies. “Evidence of observed changes in extremes such as heatwaves, heavy precipitation, droughts, and tropical cyclones, and, in particular, their attribution to human influence, has strengthened since” the last report released in 2013. 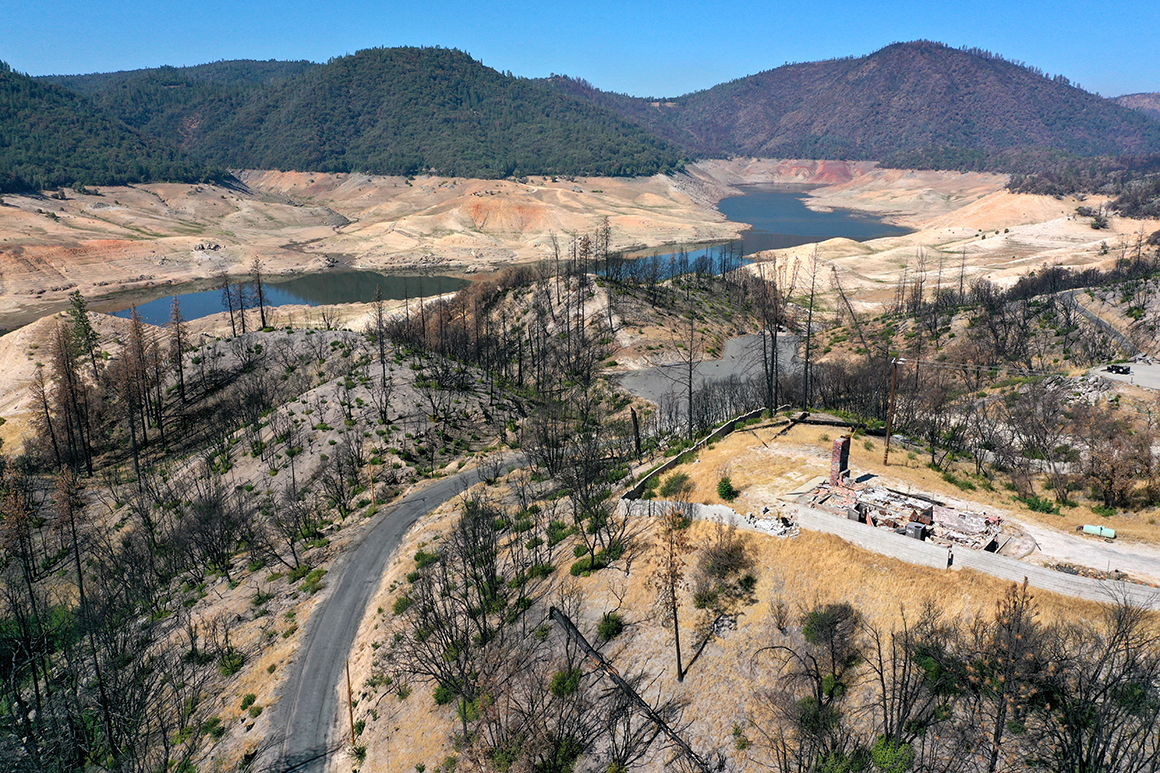 The latest climate report, which forms the first of three parts of the sixth assessment issued by the scientific body since 1990, comes as world leaders grapple with policies to wring carbon dioxide and methane emissions from their economies — and as the Senate moves forward on an infrastructure plan with $550 billion in new spending that takes only modest steps toward addressing climate change.

Nations’ goals for reducing fossil fuels have grown far more ambitious in recent years — particularly in the European Union since the adoption of the 2015 Paris Climate Agreement, and more recently in the United States and China. But governments now face the need to cut their climate-altering pollution even as they face the type of weather-related catastrophes that once seemed off in the distant future.

And the message from those scientists about those disasters is stark: Get used to them. The research shows nations must start playing defense to withstand the weather disasters that will only grow worse unless emissions from fossil fuels are eliminated.

“I think people are more and more starting to get scared,” said Jim Kossin, senior scientist with climate risk firm The Climate Service who was among the IPCC authors for the chapter on extremes. “I think that’ll help to change people’s attitudes. And hopefully that’ll affect the way they vote.”

What’s become virtually certain to scientists is that heat waves are hotter, longer-lasting and more frequent. Oceans are overheating, locking in further warming. Glaciers and ice shelves will continue to melt for decades — regardless of new action by governments — pushing tides higher to flood cities and propel storm surges further inland.

Extreme, rare events are happening in such quick succession that scientists barely have enough time to recalibrate their models. Those calamities are buckling societal institutions and physical infrastructure. And as scientists’ ability to project those events improves, it’s making them even more nervous. 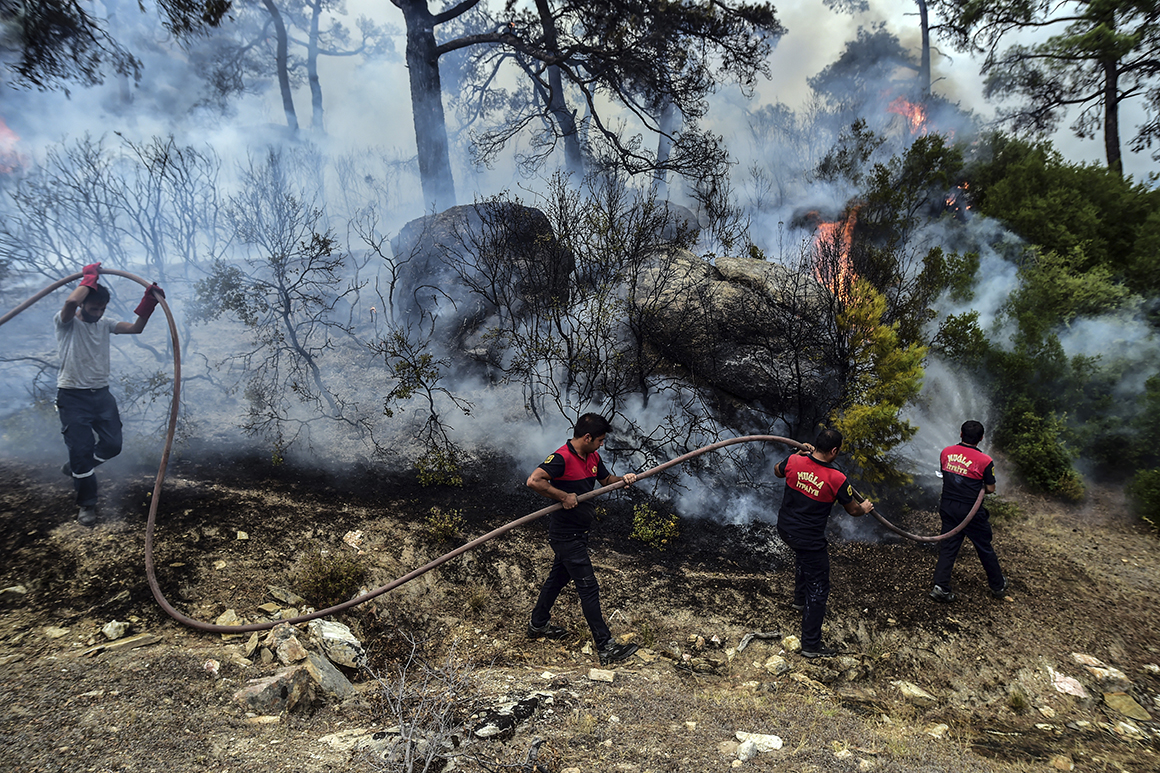 “They’re really the first kind of signs of this new climate condition,” Alexander Ruane, a research physical scientist at the NASA Goddard Institute for Space Studies and a report author, said in an interview. “And I wish I could say that there is a new normal that is a decade away, but of course, it will be continuing to change until some kind of climate policy disrupts the emissions.”

While critics have for decades complained that the climate warnings lacked details about how to prepare for catastrophic change, the new report highlights the increased precision, particularly in scientists’ understanding of the behavior of clouds, that allows them to narrow considerably the range of possible futures, said Piers Forster, a climate physics professor at the University of Leeds. That means gambling on future warming being lower than expected “can be ruled out.”

But the good news, Forster said, is that researchers have “much stronger confidence” that rapidly lowering greenhouse gas emissions would mean “temperature rise can still be limited to 1.5C.”

The scientists are also slightly more optimistic about whether the emissions that have been accumulating in the atmosphere since the Industrial Revolution have already triggered a runaway chain of events that would release even more carbon or methane, such as thawing permafrost or giant fires. That offers hope that countries can still avert such a scenario, although Forster said there were still dynamics that weren’t fully understood. “There are still risks,” he said.

In the run-up to the IPCC report release, the scientists who combed through the research and the politicians who approved the crucial recommendations for policymakers clashed over how best to present the urgent need for action, according to two people familiar with the discussions, who sought anonymity to describe private discussions.

To scientists, it was clear: The world will surpass 1.5 degrees Celsius under the most likely pathways it studied, although the most aggressive climate-fighting scenario eventually slotted the increase at 1.4 degrees — if carbon-storing forests were dramatically increased and technology that can draw carbon from the air was developed. But politicians argued for a more optimistic take: How sharply must emissions be cut before maxing out the global carbon budget, a term that conveys how much headroom for emissions the planet has before crossing 1.5 degrees Celsius.

Political leaders, in essence, wanted to inspire hope that concerted action can avert the looming catastrophes, the people familiar with deliberations said.

Additions to the report not found in previous assessments were included in response to political demands as climate change-driven extreme weather events battered towns, torched crops and upended livelihoods. That included new research in the analyses using cutting-edge scientific methods to compare the intensity of specific weather events with and without human-caused emissions, as well as modeling the predictions on regional climate effects.

The additions reflect both the advancement of the science and the political urgency of the moment, authors said.

“Societally, who cares about a very deep explanation of a process that produces this other phenomenon?” said Claudia Tebaldi, an Earth scientist at the Pacific Northwest National Laboratory and an IPCC author for the regional effects chapter. “[We] look at what the quantities that those people see connected to the impact. What is important for human health in a heat wave? What is the minimum temperature, the maximum temperature? Is it three days, is it five days?” 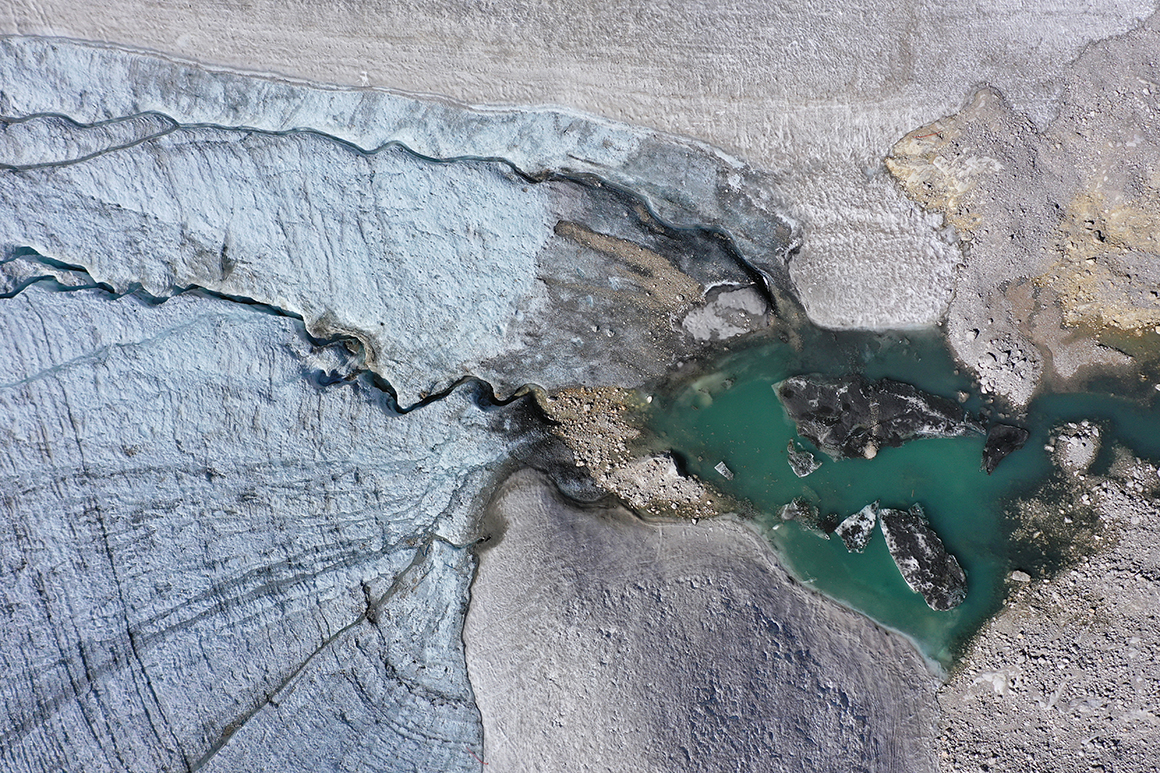 Advanced computing improvements have enabled those types of precision forecasts, said Paul Durack, a research scientist at Lawrence Livermore National Laboratory in California and an IPCC author on the science methods chapter. Scientists can now run powerful simulations accounting for numerous variables that are getting ever-more complex, such as modeling what happens with greenhouse gas emissions from land-use change like deforestation or the thawing of methane-holding Arctic permafrost.

Some of those advances clarified that the world had already warmed 0.1 degree Celsius more than previously thought, the report said.

Scientists have also made “substantial progress” in offering far more detailed projections, examining climate impacts on a geographical grid down to blocks of four kilometers, compared to 100 kilometer grid blocks previously, said William Gutowski, an atmospheric scientist at Iowa State University who helped write the regional effects chapter. That allowed the IPCC report to break down climate impacts and trends into regions for the first time, enabling, for example, the U.S. to be parceled into Western, Central and Eastern portions.

François Gemenne, who reviewed sections of Monday’s IPCC report and authored a section for a follow-up report due next year, said greater confidence on climate science had enabled researchers to move “from projections to forecasting.” That means making more specific statements about the regularity of certain extreme events in a given place.

“The problem is that if we want policy decisions to be made, we need actual forecasting rather than just projections, because projections are too vague for policymakers to actually take them into account,” he said.

This summer has had no shortage of storylines across the world. The report notes recent hot extremes would have been “extremely unlikely” without human influence. Monsoon and cyclone precipitation will increase, likely due to human activity. Extreme sea level rise and rainfall events will increase flooding. Rarer extreme events will become more frequent. 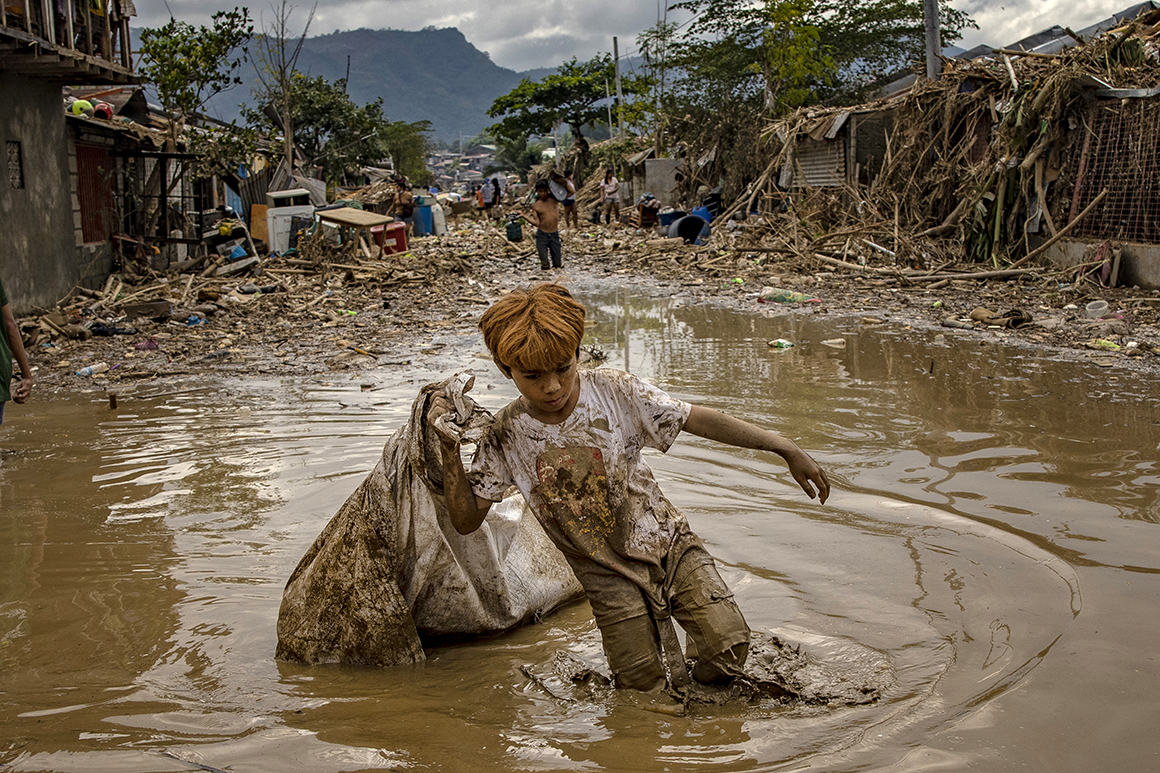 To put it in context: The IPCC said that a once-in-a-decade drought would instead occur every five years under the 1.5-degree scenario, and every four years under the 2-degree rise.

Even now, with global average temperatures up more than 1 degree Celsius from the 1850-1900 average, the chance of a once-per-50-years drought has become likely every decade, while the once-a-decade drought occurs about every six years.

“It’s worse than a lot of the rather dire statements that people like me have made in the past,” said Michael Wehner, a senior scientist at the Lawrence Berkeley National Laboratory and a report author who worked on the extremes chapter.

In past years, scientists were reluctant to link any single event with climate change — they would say events of that sort were in line with the impacts that models had predicted. That wooliness created a communications problem for scientists, journalists and policymakers as they grappled with how to explain to the public what the future held.

But the IPCC report said even that reality has changed with the advent of so-called attribution science. The emerging field is propelled by improved computing power that runs model ensembles with human-caused emissions against a world without those emissions to tease out the human fingerprint in those events. That science has shown human activity has made disasters ranging from Hurricane Harvey’s rainfall in Texas in 2017 or the Pacific Northwest heat wave in June more intense.

“When climate change first came onto the agenda, people thought of it as something that was far in the future — maybe that it was going to affect their grandkids. But I think that that kind of debate has been shifting, partly because of these event attribution studies and the extremes that we’re observing,” said Nathan Gillett, a research scientist at Environment and Climate Change Canada who led the chapter on science methods.

For Belgian climatologist Gemenne, that shift from conceptual to concrete has also been a traumatic homecoming. In July, the flooded River Ourthe smashed through Liège, the city where he grew up and now runs a research center at the local university. The floods killed more than 200 across Belgium and in Germany, where Chancellor Angela Merkel described the damage as “terrifying.”

“As a researcher who has worked on events like this all around the world, it’s really difficult to see it happen in your place,” said Gemenne. Next month, his university team will start a research project unpicking the response to the floods. “That will be a very strange situation, in a way to study yourself,” he said. “You realize that the frontline is now home.”