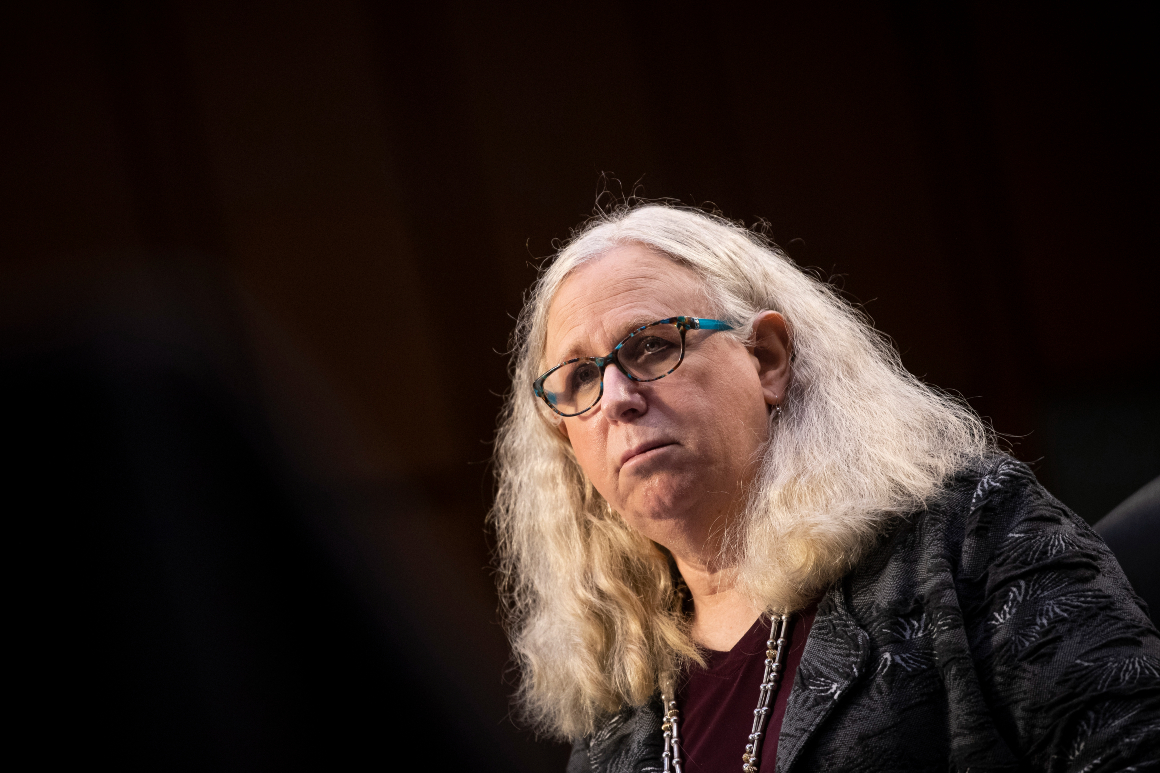 A rash of bills introduced in at least 20 states would limit trans youth’s access to gender-affirming care — and opponents say they echo some of the arguments anti-abortion groups put forth about women’s safety as they attempted to shut down clinics.

Like abortion restrictions, the trans bills would expand states’ power over highly personal medical decisions. Backers of these bills, and groups that have initiated some court cases related to trans health, also make claims about the treatment’s risks — although leading medical associations say that gender-affirming treatment is safe, and that delaying or blocking it can create harm.

“It’s the same cast of characters,” Elizabeth Nash, a policy expert at the Guttmacher Institute, which studies reproductive health and rights. “Religious groups, conservative think tanks, a host of organizations … they are seeking to limit human rights and bodily autonomy.”

HHS Assistant Secretary for Health Rachel Levine, the nation’s highest-ranking openly trans public official and a pediatrician who specializes in adolescent medicine, said in an interview that the bills are not grounded in science but are “politically based.”

“It’s egregious,” Levine said, adding that medical groups had scrupulously crafted guidelines and that much of the gender-affirming treatment was provided in leading children’s hospitals. Organizations including the American Academy of Pediatrics and the American Psychiatric Association oppose the state bills.

The tensions over trans rights — from bathrooms, to sports, to health care — have intensified even as the courts and society have grown generally more accepting of gay rights. Most of the bills stalled this year, but supporters plan to reintroduce many of them in 2022 — a year when the conservative Supreme Court will decide a landmark Mississippi abortion case that could overturn or curtail Roe v Wade and when the November congressional elections will determine whether President Joe Biden will retain a Democratic majority in Congress.

“I would expect next year state legislatures to be full of these bills,” said Louise Melling, director of the ACLU’s Center for Liberty which includes programs on reproductive rights and LGBTQ programs. “The same kinds of bills are proposed, and with new variations, in efforts to see what will stick.”

So far, only Tennessee and Arkansas have passed trans legislation — and a federal court has temporarily blocked the more sweeping Arkansas measure, pending a full ruling on the merits of the legal challenge brought by the ACLU.

Other bills, including a proposal in Alabama that made it through the state Senate but too late in the year for the House to act, would have imprisoned doctors for providing such care.

“The primary concern here is the health and well-being of Alabama’s children,” the bill’s sponsor, Shay Shelnutt, told local reporters when the legislation passed the state Senate. “We must protect vulnerable minors who do not have the mental capacity to make life-altering decisions of this caliber.”

Katherine Kraschel, executive director of the Solomon Center for Health Law and Policy at Yale University, said that criminalizing doctors who follow established medical protocols and guidelines is “an extreme position.”

Most of the bills aim to stop doctors from prescribing puberty blockers, which prevent the patient from undergoing physical changes that don’t fit with the individual’s gender identity. Levine and other physicians versed in gender-affirming care say the drugs are only given to youths approaching the onset of puberty, after appropriate mental health counseling, and often at specialized clinics or children’s hospitals.

Cross-sex hormones can be initiated later in the teen years. No treatment, other than counseling or therapy, is given to young children. No surgery is performed before age 18 — if then.

“Puberty blockers are the conservative approach — with a small c,” said Joshua Safer, executive director of the Mount Sinai Center for Transgender Medicine and Surgery and a co-author of the Endocrine Society guidelines for medical care of transgender patients.

“You can turn it off, basically,” he added, explaining that the drugs delay puberty but if the medication is stopped, the physical changes that are part of puberty resume, corresponding to the sex assigned at birth.

But conservative lawmakers and policy groups backing the bills argue that the treatment is risky, with possible ill effects including infertility, osteoporosis and elevated cancer risk. They argue that if states can decide when a teen gets a driver’s license or a tattoo, they have an obligation to protect kids from what could be serious, possibly irreversible medical harm.

“We are talking about children under age 18. State governments have always protected the health and safety of children under 18,” said Emilie Kao, director of the Richard and Helen DeVos Center for Religion and Civil Society at The Heritage Foundation.

And it’s that argument that draws the parallels with the anti-abortion-rights movement, which in recent years has used safety arguments to try to force clinic closures.

For instance, several states sought to shut abortion clinics if doctors didn’t have admitting privileges at a nearby hospital — even though emergencies after an abortion are rare and any patient can be treated at any hospital with or without an affiliated doctor. In fact, there’s a federal law guaranteeing no one is turned away from emergency care, for any condition.

The Supreme Court rejected the admissions requirements twice, in cases from Texas and Louisiana. Courts have also rebuffed some states that tried to impose physical requirements — like corridors of a certain width — which would have been impossible for some clinics to adopt, leading to closure.

The court has upheld waiting periods and similar pre-abortion requirements. Trans advocates also see a parallel there, an assumption that people seeking treatment, whether terminating a pregnancy or taking hormones, haven’t thought it through or aren’t capable of understanding the ramifications.

Stopping a teen from getting hormonal treatment, Kraschel said, is like a multi-year waiting period. And once someone has gone through puberty and has developed physical traits, such as breasts or a typically male-contoured chest, gender-affirming treatment can be even more complicated.

“What health problems are they trying to solve?” asked Alphonso David, a civil rights lawyer who is president of the Human Rights Campaign. “They are looking to devalue and demonize trans people. They are shifting strategies from the bathroom issues to sports and medical issues.”

The trans community, as well as medical specialty societies that have developed treatment guidelines for gender-affirming care, counter that there’s ample research showing that medications, including drugs that can delay puberty, are safe, appropriate, and often necessary.

Young people struggling between their gender identity and their sex at birth are at high risk for depression and suicide. One study found that 40 percent of transgender adults reported a suicide attempt, usually before age 25.

Neither side denies that some youths do end up deciding that they aren’t trans or nonbinary after all — although there’s no agreement on how often that happens. Heritage’s Kao said 20 states don’t “protect the right to receive counseling to help them accept their bodies,” meaning accepting their sex assigned at birth. An American Civil Liberties Union spokesperson said that’s an overstatement; state bans don’t block counselors from identity exploration and development.

The Arkansas statute, if allowed to go into effect, would be sweeping. However, Tennessee’s law, which bans hormonal treatment of pre-pubescent children, may not actually impact clinical care since kids don’t get treated until they do reach puberty — although some trans advocates say the measure may still deter care.

Not all conservatives agree with the restrictive approach. Arkansas Gov. Asa Hutchinson, a Republican, vetoed his state’s bill, although the legislature overrode it. “It creates new standards of legislative interference with physicians and parents as they deal with some of the most complex and sensitive matters concerning our youths,” Hutchinson wrote in a Washington Post op-ed. 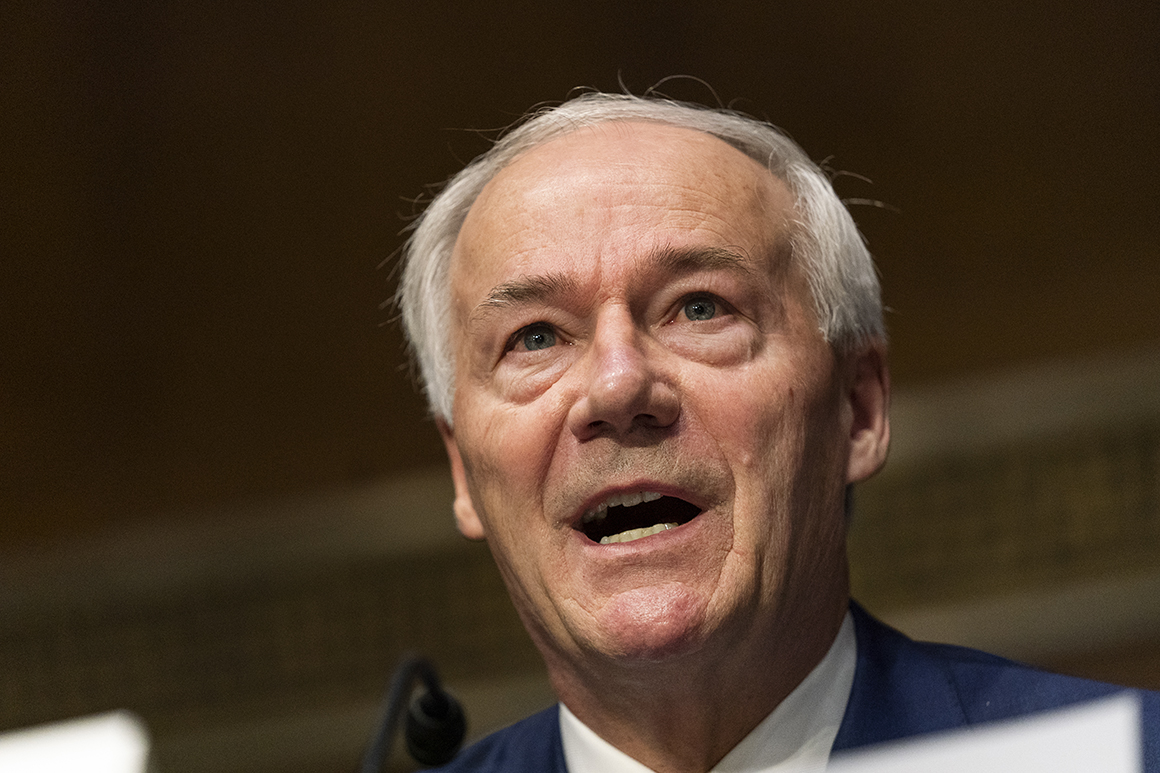 The Endocrine Society has established practice standards and says the drugs — which have other medical uses unrelated to trans kids — are safe and reversible, typically used for a year or two. “It’s a very conservative thing to do from a medical perspective,” Safer said. “I keep coming back to the word conservative — ironic.”

Older teens, who have undergone treatment and counseling, may start on cross-sex hormones, which do create sex-linked physical traits. But they don’t get surgery as minors. Safer has patients “in their 20s who are still figuring it out, and we don’t do anything irreversible until things are clear and stable.”

A related set of legal battles is playing out in North Dakota and Texas, part of a multi-year fight against a portion of the Affordable Care Act called Section 1557 that bans discrimination in medical care, including based on sex. The suits involve doctors and health systems that don’t want to perform gender-affirming care because they believe it’s harmful, said Luke Goodrich, vice president and senior counsel of the Becket Fund for Religious Liberty, which is representing the groups bringing the cases. So far, rulings have generally favored Becket’s arguments but appeals are ongoing.

Doctors are unlikely to be forced to perform certain complex reconstructive surgeries involved with gender transition to avoid a discrimination case — those operations require special training for surgeons who seek it out. But more common procedures like mastectomy or hysterectomy are part of these legal disputes. A doctor who removes a uterus for a cancer patient but not for a trans patient can face discrimination suits, and could be cut off from payments from government programs like Medicare and Medicaid, said Goodrich, adding that it’s about both conscience and medical judgment.

“A doctor who does a mastectomy with breast cancer might have concerns about removing perfectly healthy breasts from young girl with gender dysphoria,” he said. “It’s bad medicine.” He said this doesn’t mean doctors shun trans patients for other care ranging from “cancer to the common cold.” (Some trans individuals do report that is not their experience, but Goodrich says the legal fight is focused on gender-affirming care.)

Guttmacher’s Nash says these opt-outs for practitioners are another echo of the fights against abortion rights. “That sounds very much in the vein of what we’ve seen in nearly 50 years of abortion refusal,” she said. “I see the parallel very strongly that this is promoting misinformation around the services that are being provided by people who want to provide them, are trained to provide them, and see them as ensuring that people have the full range of medical care that they need.”

HHS’s Levine said the challenges are not only cultural but also medical and legal. The country has gone through rapid social changes about gay men and lesbians; there’s a lot less knowledge, familiarity and acceptance of trans people.

“One of my goals, by being very out and very visible, is to educate people and have people, you know, become more familiar with transgender individuals,” she said, adding it’s part of her role in public health and public service.