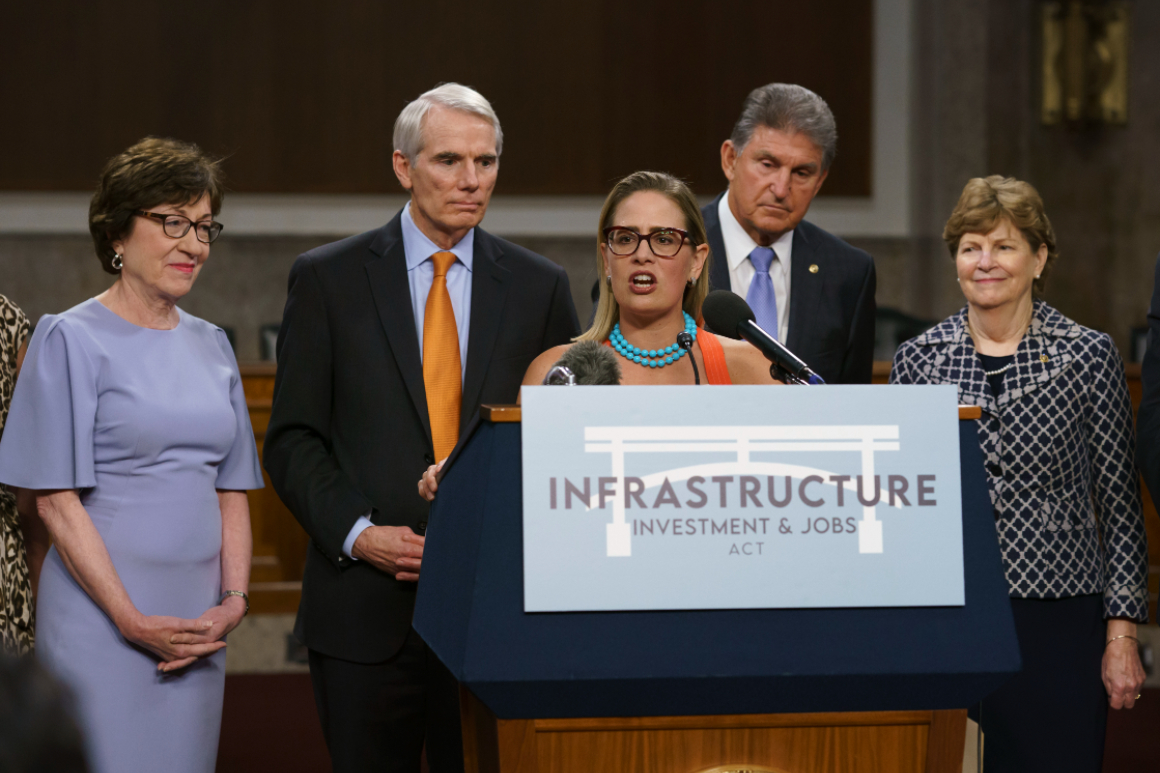 Senate Republicans can’t stop Democrats from spending as much as $3.5 trillion more on social priorities like climate change in the coming months. Joe Manchin and Kyrsten Sinema can, though, and the GOP lobbying effort is already underway.

After 19 GOP senators boosted a bipartisan infrastructure plan past a filibuster and onto the House, Republicans are yearning for results from their cooperation with Manchin and Sinema’s effort. Namely, they’re hoping to persuade the senior Democratic senators from West Virginia and Arizona to buck their party and shave down the social spending bill by holding out their votes.

Republicans who speak frequently to the duo are realistic about their chances, acknowledging it’s highly unlikely Sinema and Manchin would end up blocking their party’s biggest priorities altogether. But Sinema is publicly uncomfortable with spending $3.5 trillion and Manchin is noncommittal — so the GOP senses an opportunity.

Sen. Susan Collins (R-Maine), who is close to both senators and is trying not to overtly pressure them, said “each of them is fiscally responsible and are people of courage. And so I hope they will break on this enormous expansion of government.”

“I know, from talking to both of them, there are concerns about the size and about the various tax increases,” said Senate Minority Whip John Thune (R-S.D.). “Their vote is the whole enchilada. If they want to stop this thing, they can. And I hope they will use that power.”

In an evenly divided Senate, each Democrat has the power to shape the massive spending bill the party began teeing up this week using the filibuster protections of the budget process. That’s because, in the end, Senate Majority Leader Chuck Schumer needs every one of his 50 Democrats to vote together to get anything done.

Schumer’s success on the budget resolution that sets up that spending bill is a sign that he has everyone “chugging along,” as he put it in a brief interview on Tuesday. But it’s lost on no one that Manchin and Sinema are the Democrats’ toughest votes to nail down.

Manchin held out for hours in March over unemployment benefits on Democrats’ Covid relief bill, eventually slashing the aid boost after negotiating with Sen. Rob Portman (R-Ohio), who is close to both moderate Democrats. Republicans say privately they think Sinema is even more concerned about the spending bill and its tax increases than Manchin is at the moment.

Sinema sided with the Republicans — and against Manchin — on Tuesday to help defeat a symbolic budget amendment to protect farms and ranches “while ensuring the wealthy pay their fair share.”

“What we’ve tried to do is be as fair as possible with them through the bipartisan infrastructure bill. And I think we have. And, secondly, to be open to their reactions and suggestions when it comes to the budget resolution,” said Senate Majority Whip Dick Durbin (D-Ill.). He admitted that orienting the bill too much in Manchin and Sinema’s direction could be problematic with liberals: “It’s a delicate balance.”

Montana Sen. Jon Tester, another moderate, was quicker to vow support for Democrats’ budget resolution setting up the spending bill than Sinema or Manchin. But like them, he says his vote for a budget by no means locks in his support for the final product.

“I’ve heard [Manchin and Sinema’s] concerns, and we’ve got to sit down and make the case as to why shirking on some of the commitments in the budget are going to be hurtful to the country,” said Sen. Chris Murphy (D-Conn.).

The House also still has to pass the bipartisan infrastructure bill that cleared the Senate on Tuesday. More than one-third of the Republican conference supported that measure in part to take pressure off of Manchin and Sinema to change the Senate’s rules or go big on reconciliation.

After working closely with Sinema and Manchin for months on the bipartisan bill, Sen. Bill Cassidy (R-La.) signaled the shift among where Republicans like him are putting their energy: “I want that reconciliation bill to fail.”

Senate Minority Leader Mitch McConnell even supported the infrastructure bill, praising Sinema all the while for standing against her party’s plans to spend as much as $3.5 trillion. But members of both parties are debating how objectionable that number really is to her.

She and Manchin have thus far talked publicly about the party-line spending bill only in generalities. Sen. Mike Braun (R-Ind.) said the lack of specificity from her “worries me, that she might be for $2.5 trillion or $3 trillion or something.”