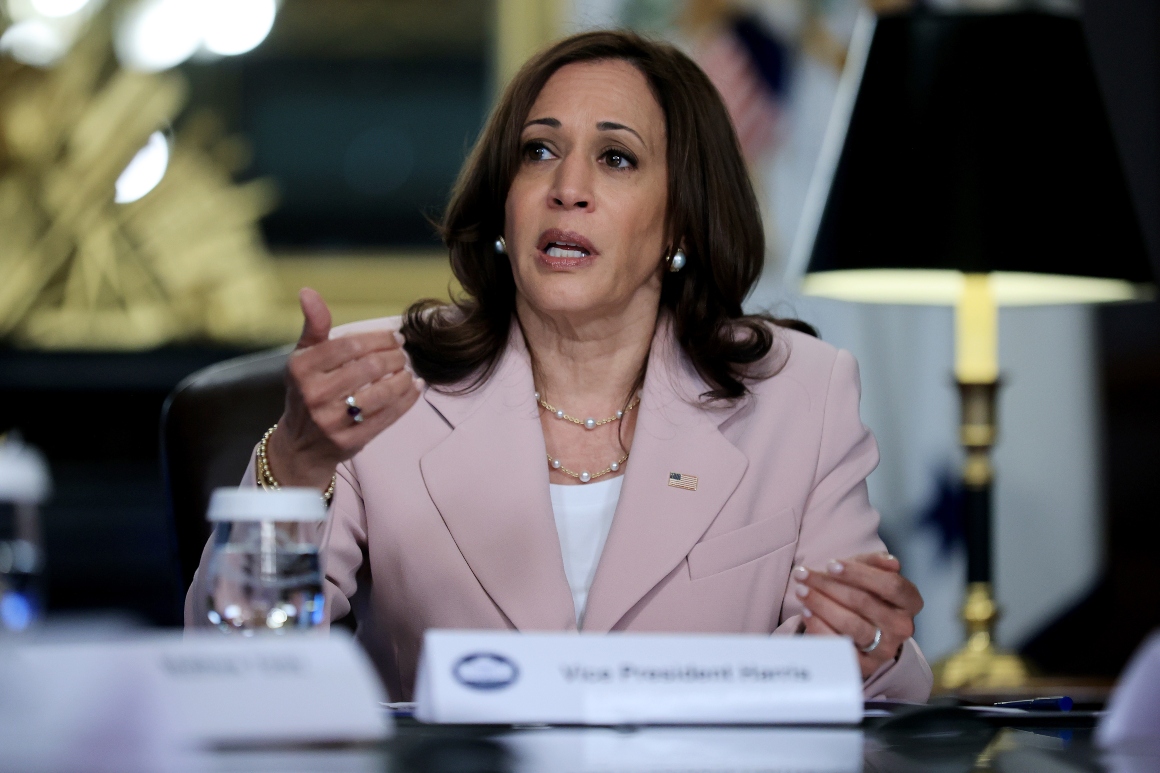 Kamala Harris took out her notebook and pen, put her elbows on the long shiny table and looked at the women surrounding her.

“Tell me what you got,” she said, according to one of the meeting’s attendees. It was a group of women labor leaders and women entrepreneurs there to discuss the pandemic recovery and getting women back to work.

The vice president was in her ceremonial office in the Eisenhower Executive Office Building. A bust of Frederick Douglass, on loan from her alma mater Howard University, always sits over her shoulder. She will often call attention to it as a reminder to attendees of the stakes and importance of their work.

Since 1980, vice presidents have used this space as a secondary office (the one in the West Wing is closer to the president and serves as the primary work space). Harris has used it to swear in Cabinet members, do interviews and to give remarks alongside the South Korean president.

But for the seven months since she was sworn in herself, Harris has mostly used the office to build a network of allies and associates that can serve two purposes: strengthen the administration’s connections with key power players and groups while building an unofficial political operation in waiting — one she could activate for a future presidential bid.

The two-for-one approach gives Harris a chance to raise her profile both within the administration and for whatever comes after, as she seeks to find her footing as vice president, in a Beltway environment she is still learning to navigate. Adding to her challenges is a policy portfolio laden with politically combustible issues like immigration and voting rights, which has made her a favorite target for conservatives. Some longtime supporters told POLITICO in June they were concerned Harris had stepped too far back from politics. Now even some of her closest allies have recognized she needs help fending off the incoming fire.

Veteran Democratic strategist James Carville said building a national network is a smart move for Harris — or anyone with presidential ambitions. “Any prospective candidate would be doing the same. [Whoever’s] idea it was: Her, somebody on the staff or a consultant, I think it’s a good idea,” Carville added. “If I was one of her advisers, I’d vote for it.”

But Harris is not just any prospective candidate, serving under a president in Joe Biden whose advanced age has left many Democrats privately wondering if he’s up to another run in 2024. That dynamic makes her wary of any moves that could be perceived as undermining the boss.

Almost once a week, the fiercely loyal VP meets with advocates, activists, industry leaders and members of Congress to address her ever growing duties, which her staff calls her “Ceremonial Conversations” series. And her staff then continues to communicate and coordinate with the individuals and groups that have attended her meetings long after they leave the EEOB.

The topics of the meetings have ranged across the entire Harris portfolio: slowing migration from the Northern Triangle region of Central America to the U.S. southern border; pushing back against Republican efforts to curtail voting access; encouraging Americans to get the Covid-19 vaccine; and promoting women in the workforce. While Biden has been cloistered in the White House or consumed by one crisis or another, Harris has met with dozens of interfaith leaders, advocates, members of Congress, civil rights leaders and women leaders — making her a high-level community organizer of sorts for the Biden agenda.

The leaders she meets with, meanwhile, have become Harris’ eyes and ears among key Democratic constituencies. “She’s followed up with us. Our staffs work together. We continue to feed her stories,” Mary Kay Henry, the international president of the SEIU, told POLITICO.

Henry was in the group of women leaders who met with the vice president in March. She and others say the gathering prompted further meetings and coordination between their organizations.

“I think the vice president, bringing us together, reminded us that we needed to be in more regular communication on all of these issues, especially on the economic recovery efforts,” said Ai-jen Poo, the director of the National Director’s Workers Alliance, who was in that same meeting.

While the ceremonial office meetings create a roster of contacts and relationships for Harris as she eyes another national campaign, they also give these groups an opportunity to build a relationship with President Joe Biden’s heir apparent.

Donna Brazile, who met with Harris and Black women civil rights leaders about voting rights, insists Harris’ networking is not connected to any future political ambitions. “I’ll be the first to say when she’s making moves, this is not her making moves,” she said.

But unlike Biden, Harris doesn’t have decades of connections in Washington and with national allies, a fact that hampered her 2020 primary bid. She struggled to gain traction with core Democratic constituencies like national labor unions, who largely lined up behind Biden and another longtime senator, Bernie Sanders of Vermont.

Carville sees the network building as vital for Harris to avoid the same pitfall in her next campaign, saying she and her team clearly learned the lessons of her first run at the presidency. “There’s not a greater education than the second kick of the mule. She doesn’t want to get kicked again,” Carville said.

At the same time, the relationship building helps achieve any VP’s first objective: being a good number two. As the administration continues to try to push through the most ambitious agenda in a generation with the slimmest of majorities, Harris aides know they can call on these groups to bring pressure from the outside as they work to sell their goals to the American people.

It’s also a way to keep key constituencies on the administration’s side, building goodwill and making it more likely they’ll turn to the VP’s team when issues arise, rather than attacking the administration on social media or through reporters.

“You set up an organization to listen to people who disagree with you as well as those who do and you try to turn them into allies. And if you can’t, you continue to show respect for their positions,” Roy Neel, former chief of staff for Vice President Al Gore said.

The needle Harris and her team need to continue to thread, Neel says, is the follow through and constant communication from Harris and her team. “It can’t just appear to be just giving lip service or trying to exploit a group for a photo op or something, it has to feel real to these people,” he added.

Biden has done meetings of the same sort, many with Harris sitting next to him — but Harris is doing much of the convening. Aides say that’s how she likes to operate, but some Democrats think Harris’ background can make her a better ambassador to some groups than Biden or other administration officials.

“She does have an unusually important iconic relationship with the public and Democratic groups in particular,” Neel said. “So she can reach out to a wide spectrum of people who say, ‘Yes, I’ll meet with Vice President Harris, whereas, you know, maybe they didn’t want to meet with Dick Cheney or Pence.”

Allies say the unconventionality of the networking approach makes sense for a White House in uncharted territory: with a woman at the head of these tables for the first time in history. And they suggest Harris might be creating a blueprint for other powerful women in politics to emulate.

“I think women really do see power and value where others don’t,” Poo said. “We really try to leverage every form of power available to us to be able to achieve our goals and make change as leaders, partly out of necessity. Our political environment is generally not one that is conducive to women being powerful in our politics. It’s a form of democracy.”