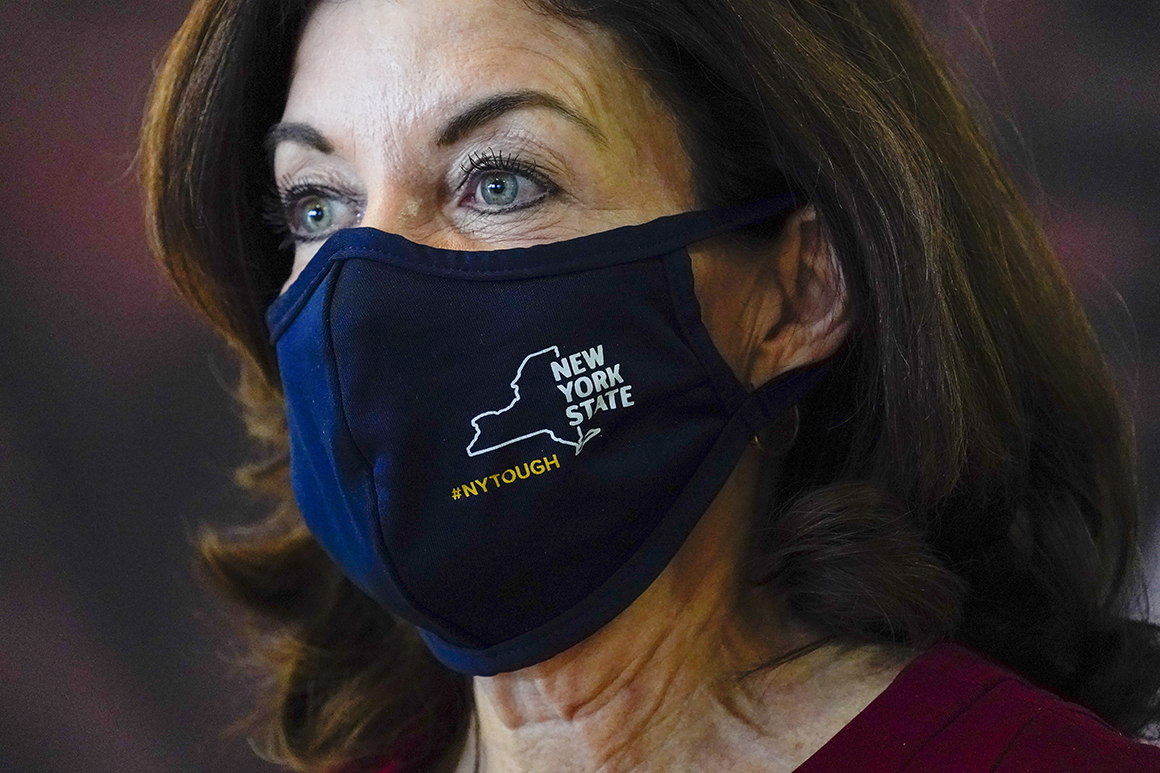 ALBANY, N.Y. — Kathy Hochul has her work cut out for her.

For more than a year, Gov. Andrew Cuomo led New York’s coronavirus response with a vice-like grip that put him — and a small circle of trusted advisers — at the center of nearly all of the state’s public health decisions. But as he became engulfed in scandal, Cuomo lost much of his authority and increasingly abdicated decisions to local leaders.

Now, as Hochul prepares to take charge of state government in less than two weeks, the lieutenant governor is facing a potentially career-defining leadership moment: shepherding New Yorkers through a resurgence in the Covid-19 pandemic, just as millions of school children head back to the classroom — some for the first time in more than a year. How she manages the pandemic over the next two months could make or break her political future.

Local leaders and education officials are already looking ahead to a Hochul administration as a welcome change — both from the last six months of scandal, and the last ten years of the Cuomo regime.

“I have a great deal of respect for the lieutenant governor. Above all, she is somebody who cares about governance, and is not a sociopath,” state Sen. Gustavo Rivera, a Bronx Democrat and long-time Cuomo foe, said in an interview. “But there’s no question this is going to be difficult.”

Cuomo became known for his micromanager-in-chief approach on Covid and nearly all other aspects of state government. His folksy and philosophical press conferences, combined with assertive action to consolidate his emergency powers, helped make him a household name and a symbol for how to lead through a pandemic.

But Hochul — who was largely relegated to ceremonial duties in her tenure as lieutenant governor, attending ribbon cuttings and fairs as she crisscrossed the state every year — remains a largely unknown entity as she prepares to take over as New York’s first woman governor.

And she’s already sought to put to rest any speculation that she’s not up for the job.

“As someone who has served at all levels of government and is next in the line of succession, I am prepared to lead as New York State’s 57th Governor,” Hochul said in a statement issued shortly after Cuomo announced his resignation on Tuesday.

Hochul’s team did not immediately respond to questions about her planned pandemic response, though the governor had only resigned hours earlier. She will address the public and hold a press briefing in Albany on Wednesday.

It remains to be seen how heavily she will depart or align with Cuomo’s warlike strategy from the early days of the Covid crisis. That domineering approach helped cement Cuomo’s status as an authoritative figure on Covid-19. And while it earned him early acclaim, it also hastened his political downfall as questions arose over the state’s handling of the coronavirus in nursing homes.

But even as Cuomo’s pandemic halo faded, the governor repeatedly pointed to his successes in leading the state through the worst of the viral outbreak as a reason he should remain at New York’s political helm. He stuck by that playbook Tuesday even as he announced his plan to step down.

“Government really needs to function today. Government needs to perform. It is a matter of life and death,” he said in livestreamed remarks. “Wasting energy on distractions is the last thing that state government should be doing. And I cannot be the cause of that.”

Hochul, Cuomo said, “can come up to speed quickly.”

“This transition must be seamless: we have a lot going on,” he said. “I’m very worried about the Delta variant — and so should you be.”

The state Department of Health, for its part, “remains focused on our mission to protect the health and safety of all New Yorkers, and we continue to manage the public health response to the ongoing and unprecedented global pandemic,” spokesperson Jeffrey Hammond said in an email.

It is unclear what role state Health Commissioner Howard Zucker, who often sat at the table with Cuomo during his briefings last year, will play in the new administration. Hammond did not respond to requests seeking clarification on whether Zucker had been in contact with Hochul following Tuesday’s announcement.

The commissioner said in a late-afternoon statement that he respected Cuomo’s decision to step down and hoped “we do not forget the notable achievements of his tenure that forever improved the lives of New Yorkers.”

Local health officials from across the state had discussed taking a vote of no confidence in Cuomo’s health commissioner prior to the governor’s resignation announcement, according to Stephen Acquario, the executive director of the New York State Association of Counties. Acquario said on Tuesday those local officials spoke with Hochul last week in preparation for any transition in executive power.

“There have been assurances that there will be engagement on a high level immediately with her office and, as necessary, all state agencies,” Acquario said in an interview. “We did not limit the discussion to Covid. … There’s a tremendous amount of public policy that is connected through, and by, and with the county governments who operate mirror state agencies.”

An outstanding public health question for Hochul is whether she will stick with the Cuomo administration’s decision to issue no guidance to schools reopening this fall, a move that drew swift and vocal criticism from county leaders and across the education world.

School guidance had been promised to superintendents and school administrators for months, and top state education officials urged Zucker to “consider DOH’s statutory responsibilities as the state agency devoted to protecting the public health.”

To Cuomo’s critics, the move represented a larger abdication of duty as Covid-19 cases rose at an alarming pace across the nation. The lack of authority from the governor’s office on Covid — an issue it once dominated — sparked questions in Albany and across the state about who is now leading its response against the deadly virus.

“I would assume the governor is,” Assembly Speaker Carl Heastie (D-Bronx) told reporters Monday when asked.

State Education Commissioner Betty Rosa, in a memo released Tuesday morning, said her department would be providing guidance to schools reopening this fall, “in light of the continued absence of health-related school opening direction and assistance from the Governor’s Office and the State Department of Health.”

A spokesperson for the education department did not immediately provide comment on whether Rosa had spoken with Hochul since Cuomo’s resignation, or say if the lieutenant governor had discussed plans with her regarding school guidance.

“The short answer, really, is yes we want guidance,” said Bob Lowry of the New York State Council of School Superintendents. “We’d prefer that it’d be sooner rather than later, but the reality is she does not become governor for 14 days. On some issues, I don’t think we can wait that long.”