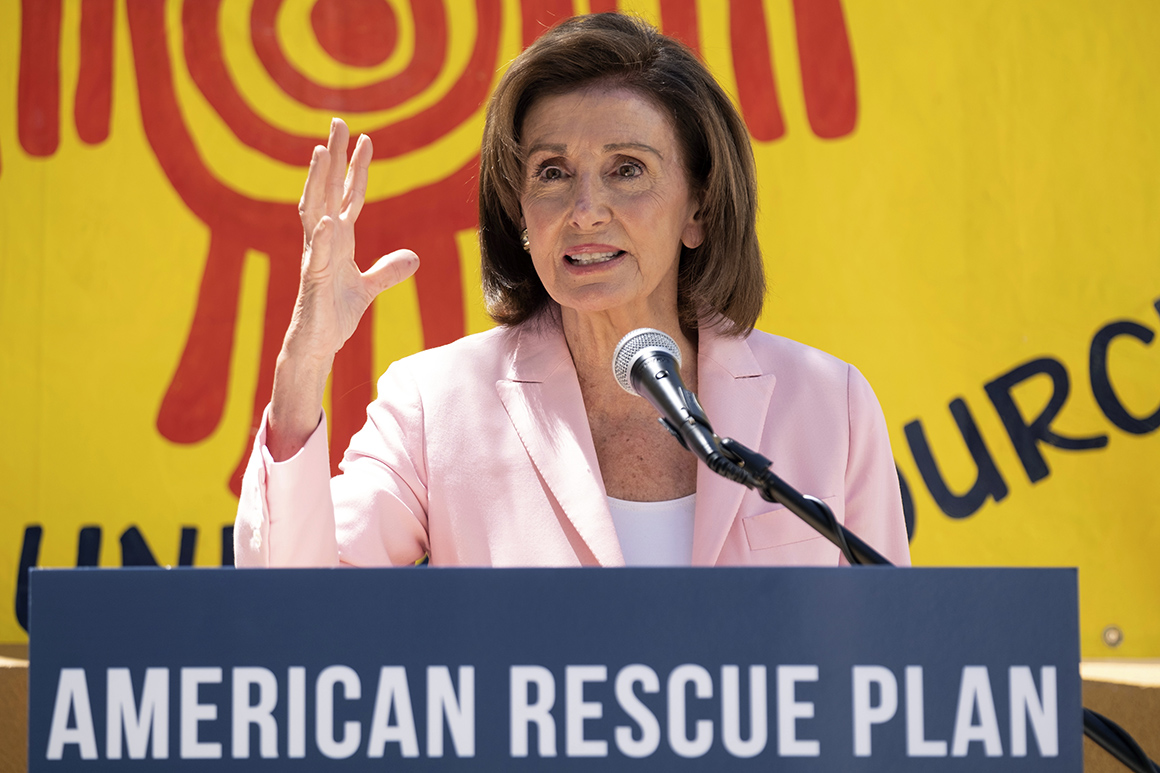 Speaker Nancy Pelosi told her caucus Wednesday she would not waver from her two-pronged strategy to deliver President Joe Biden’s main domestic priorities, bringing the House closer to a standoff between Democrats’ leadership and their most vulnerable members.

The California Democrat reiterated in no uncertain terms during a call with members that she would only bring the Senate’s bipartisan infrastructure deal to the floor after the upper chamber finishes the party’s $3.5 trillion social spending package. Her approach shrugs off a growing pressure campaign from moderates, who are urging Pelosi to take up the Senate infrastructure bill more quickly so that they can sell it to voters back home.

But without a separate party-line measure containing the rest of the party’s priorities, Pelosi told Democrats, she wouldn’t have the votes to pass either bill.

“I’m not freelancing. This is the consensus of the caucus,” Pelosi told her members on the call, according to several people listening. “The votes in the House and Senate depend on us having both bills.”

Those remarks — delivered in the caucus’ first gathering since the Senate passed its infrastructure bill — boosted the confidence of progressives, who have long insisted that Pelosi would keep her vow to hold onto the Senate’s bipartisan bill in order to force the completion of a broader party-line bill. But Pelosi’s timetable hasn’t assuaged a small group of frustrated Democratic moderates who are plotting ways to convince her and her team to change course.

At least six of those centrists say privately they are willing to block consideration of the Democrats’ budget blueprint as a last-ditch move to stall the $3.5 trillion bill, according to two people familiar with the discussions. None of those Democrats would speak publicly about their plans, though they argue their influence is only growing with their party five seats away from losing the House.

Democratic fears of the majority slipping away heightened this week after a respected centrist, Rep. Ron Kind (D-Wis.), announced his retirement. Several of his fellow moderate Democrats held a strategy call on Wednesday afternoon to discuss how best to use Pelosi’s razor-thin vote margin to their advantage.

The clashing approaches from the dueling factions of Pelosi’s caucus have burst out into the open after weeks of whispers, and with just a three-vote margin in the House, each side is predicting the other will buckle after a sweltering season of battle over Biden’s next big legislative priority.

“At some point, it’s going to become a ‘this or nothing’ kind of question for everybody,” said Rep. Dan Kildee (D-Mich.), a member of the Democrats’ vote-counting operation. “What I’ve discovered over the brief number of years that I’ve been here is that people do use the leverage they have until they can’t anymore.”

Those long-simmering tensions are more real for House Democrats now that the Senate has passed its bipartisan physical infrastructure plan and voted to tee up the broader budget bill. The House is slated to return in less than two weeks to take the same step on the budget blueprint.

But while House Republican majorities have stumbled thanks to conservative rabble-rousers who were happy to upend their leadership’s plans and tank legislation, Democrats don’t usually operate the same way — even after they threaten to do so.

A senior Democratic aide said it was still too early to know how serious to take the warnings coming from a handful of moderates but that one thing is certain: If Pelosi puts the Senate’s infrastructure bill to a vote this month, it would fail due to overwhelming progressive opposition.

While some moderates believe their hand is strengthened by the dozens of Republicans who are expected to back the Senate’s bipartisan plan, other Democrats insist their party cannot count on GOP votes. House Minority Leader Kevin McCarthy (R-Calif.) has not said whether he will discourage his members from supporting the Senate-passed infrastructure bill.

As she ended the caucus call Wednesday, Pelosi issued a subtle alert of her own, telling lawmakers that this month’s upcoming budget resolution vote isn’t controversial and the House should be able to move forward “without drama,” according to multiple Democrats listening.

Pelosi and her leadership team also told members Tuesday they are looking to finish both bills as quickly as possible. House committees have been given a Sept. 15 deadline to submit their pieces of the social spending plan that’s set to pass using the filibuster protections of the budget reconciliation process.

Under the current plan, the House would vote first on that completed reconciliation package, House Budget Chair John Yarmuth (D-Ky.) told Democrats on the Tuesday call, according to people listening. And if the Senate makes changes, the bill could bounce back to the House for a final vote.

Some senior Democrats and White House officials have suggested they want to pass both bills by Sept. 30, the same day a slew of transportation programs and current government funding are set to expire.

But for many House centrists, that’s too late. Moderates have publicly and privately warned that Biden’s bipartisan infrastructure victory could be long forgotten by the fall — and so, too, could their ability to tout it soon to their voters.

“I believe we need to take an immediate vote on the infrastructure legislation that we have in front of us,” said Rep. Stephanie Murphy (D-Fla.), a co-leader of the centrist Blue Dog Coalition, adding that the House should not “hold the infrastructure bill hostage to the yet-developed reconciliation bill.”

“If it’s good enough for Bernie, why isn’t it good enough for House progressives? Why are some of them blocking this historic win?” added Rep. Josh Gottheimer (D-N.J.), a co-chair of the bipartisan Problem Solvers Caucus that has endorsed the Senate-passed bill.

House liberals, however, argue that Democrats shouldn’t simply cram their bills into an abbreviated timeline with potentially historic legislation at stake. Democrats are eying sweeping expansions of the U.S. safety net in their proposed $3.5 trillion bill, from child care to universal pre-K to assistance for the elderly.

And at least 60 percent of the 100-member Congressional Progressive Caucus has said they would oppose the Senate’s bipartisan bill without that reconciliation bill.

“Our focus now is delivering this all the way to the President’s desk — which is why we will continue to stay focused on ensuring the passage of this bill before we can vote for the smaller bipartisan package sent over by the Senate,” Rep.Pramila Jayapal (D-Wash.), who leads the CPC, wrote in a statement Wednesday heralding the Senate’s key step on its party-line spending bill.

But in a sign of just how tenuous Democratic leaders’ control will be in the coming weeks, centrist Sen. Joe Manchin (D-W.Va.) issued a statement of his own Wednesday. Manchin raised “serious concerns” with the cost of the social spending plan given rising inflation rates.