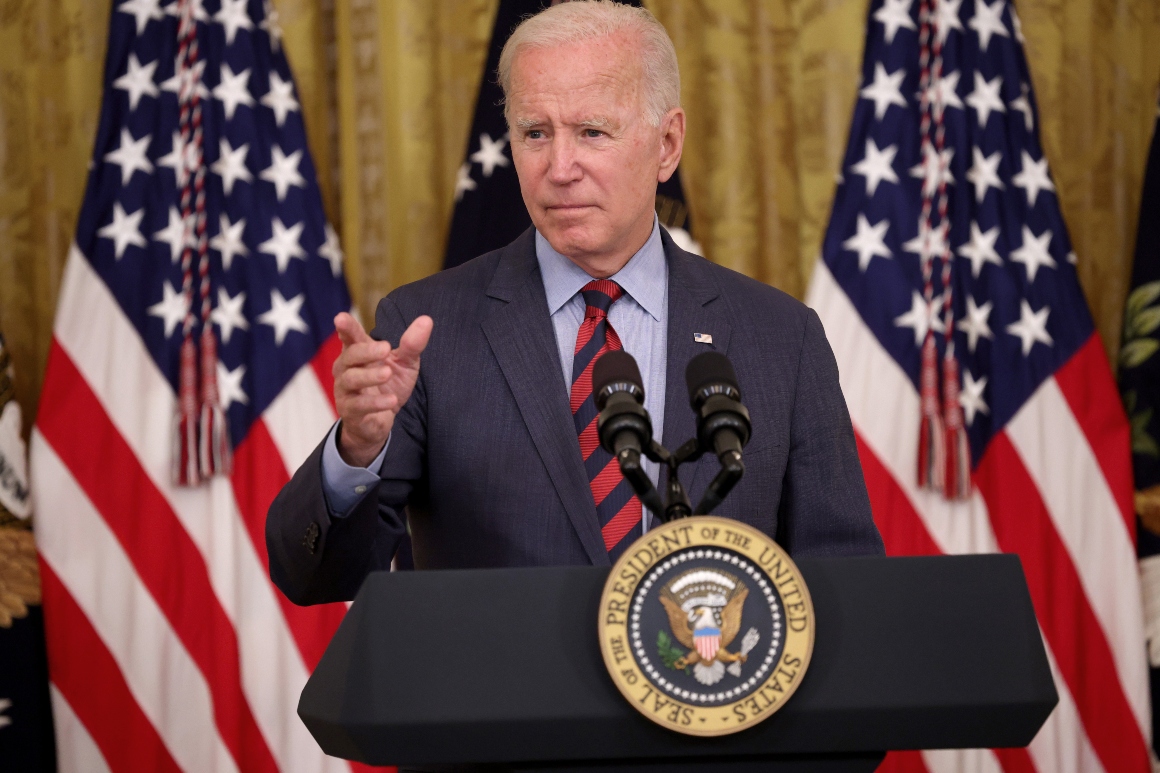 President Joe Biden’s audacious move to assuage liberals by extending a pandemic-related moratorium on evictions puts him in a position he has so far avoided: inviting a high-profile showdown with the Supreme Court.

If the court — as expected — shoots down the policy following a legal challenge by Alabama and Georgia Realtors’ groups, it could also wind up fueling the progressive drive for Supreme Court reform that Biden has been so lukewarm about.

“It will be a powerful addition to the progressive bill of particulars against this court and it could well accelerate the demands for court-packing and other muscular steps,” said Jeff Shesol, a historian and former speechwriter for President Bill Clinton.

Under intense pressure from liberal Democratic lawmakers and activists, Biden announced Tuesday that a revamped version of the eviction ban that expired on July 31 would be re-imposed by the Centers for Disease Control and Prevention as a pandemic mitigation measure. His reversal came after senior administration officials had said for a week that such a move would be fruitless and perhaps unlawful as a result of a Supreme Court ruling in June.

“The bulk of the constitutional scholarship says that it’s not likely to pass constitutional muster,” the president told reporters, before adding: “But there are several key scholars who think that it may and it’s worth the effort.”

On Tuesday, White House Press Secretary Jen Psaki insisted that the president felt perfectly comfortable with the legality of the new moratorium. But her comments defied the clear impression Biden had left — an impression he might come to regret.

“It’s a very rare example of a president outright acknowledging that the step he’s about to take might not pass constitutional muster, but he has to try it anyway,” Shesol said. “Typically when presidents have some sense of legal uncertainty about an action they’re taking, they’re unlikely to acknowledge that publicly at the time.”

There is some precedent for Biden here. In the lead up to the launch of the Deferred Action for Childhood Arrivals program, President Barack Obama repeatedly declared publicly that congressional action was needed to help so-called Dreamers and his power to act without Congress was sharply limited.

“There’s a limit to the discretion that I can show because I am obliged to execute the law,” Obama said in an interview with Spanish-language TV outlet Univision in October 2010. “I can’t just make the laws up by myself. So, the most important thing that we can do is focus on changing the underlying laws.”

When U.S. District Court Judge Andrew Hanen declared that DACA program invalid in a ruling last month, some nine years after Obama unveiled it, he effectively threw Obama’s words back at him.

“President Obama, before DACA was implemented, agreed with this underlying premise,” the judge wrote, before quoting Obama’s remarks.

Whether Biden will suffer a similar rebuke will become clear in time. But should the high court reverse the CDC’s revised eviction moratorium, it would do so amid growing liberal criticism of the conservative-majority court — as well as angst over the fate of Justice Stephen Breyer, who has thus far ignored calls to resign to make way for a younger Biden appointee. Breyer, 82, recently tapped a full slate of clerks and has a book coming out in September arguing that the court must steer clear of politics.

Some legal activists welcomed Biden’s move on the eviction ban, but sounded uncertain as to whether liberals would embrace the court-related battle with as much enthusiasm as their successful pressure campaign aimed at the president.

“I hope that progressives will put as much attention on the inevitable Supreme Court ruling swatting this down as they did on Biden the last few days,” said Brian Fallon of Demand Justice, a former Obama Justice Department spokesperson who advocates for enlarging the court. “I hope that all the energy and compassion for people who stand to suffer if the moratorium was not continued will remain when the Supreme Court becomes the villain instead of Joe Biden.”

Fallon said that “ideally” Biden would “castigate” the court if it torpedoes the eviction ban, but declined to predict that the president will do so.

Biden has publicly opposed plans to increase the number of justices on the court, but agreed to launch a presidential commission to study that and other reforms.

A high court ruling blocking the new Biden eviction policy could come in the lead-up to the release of the commission’s report, expected in November.

The grim legal outlook for the eviction moratorium stems from an emergency June 29 Supreme Court ruling in which the justices split, 5-4, to allow an earlier version of the CDC eviction ban to run through the end of July.

Only one member of the court, Justice Brett Kavanaugh, explained his or her vote. Kavanaugh joined the court’s liberals and Chief Justice John Roberts in the narrow majority allowing the ban to continue for another month, but Kavanaugh made clear he would have voted differently if the Biden administration sought to extend the policy by fiat without a blessing from Congress. 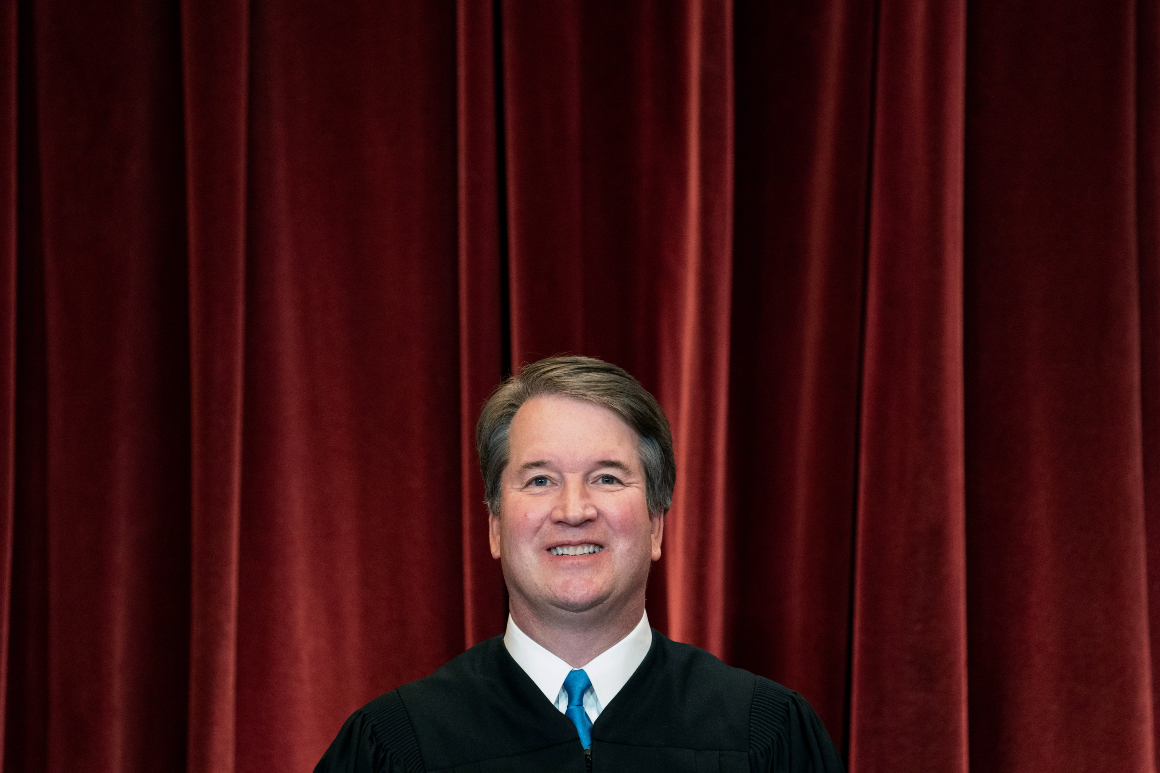 “In my view, clear and specific congressional authorization (via new legislation) would be necessary for the CDC to extend the moratorium past July 31,” Kavanaugh wrote.

Although numerous presidents have embarked on policies that faced peril at the court, few — if any — have made a policy move in such tension with a Supreme Court ruling so soon after that ruling was issued.

In a filing Wednesday night with a federal district court judge in Washington, lawyers for the Realtors argued that the June decision from the justices means Biden’s latest move is illegal and should be immediately blocked. “The Supreme Court’s ruling was hardly ambiguous. Indeed, the White House clearly acknowledged that the Supreme Court had ruled that the CDC lacked authority to extend the moratorium—and that the CDC was blocked from extending the moratorium,” they wrote.

Most of the early examples of presidents defying the court involved individual justices, when those justices did much of the work now done by appeals courts.

In 1808, President Thomas Jefferson erupted in anger after Justice William Johnson Jr. blocked an export embargo Jefferson imposed as part of a standoff with Great Britain. Jefferson told customs officials to ignore the ruling. They did.

And in the early days of the Civil War, President Abraham Lincoln was deeply aggrieved by a decision from Justice Roger Taney rebuking Lincoln for suspending habeas corpus in areas of hostilities against Union troops. Lincoln denounced the ruling in front of Congress and essentially ignored it until he managed to get lawmakers to suspend the writ two years later.

While even Biden suggested the new incarnation of the eviction ban won’t survive the high court’s scrutiny, at least one prominent legal scholar has been in close touch with the White House in recent days contends the latest policy has a fighting chance of surviving a constitutional challenge.

“I think the odds are greater this time around,” Harvard Law Professor Laurence Tribe said in an interview.

Tribe pointed to two changes that could affect the Supreme Court’s take: one in the new policy and another in the state of the pandemic.

While the earlier eviction ban applied nationwide — something Kavanaugh pointedly noted in his brief opinion in June — the new one applies only in areas of substantial or widespread Covid-19 transmission. “The initial moratorium was nationwide and not targeted in health-specific terms that are of a sort that fit the mandate of the CDC,” Tribe said.

The new pandemic development is the recent surge in cases, powered by the more transmissible Delta variant. “It’s a question of whether the CDC can act in response to the concern about the Delta variant and target its actions,” Tribe added.

The administration says the new ban will still cover about 90 percent of the U.S., including most major urban areas, and that it will last until Oct. 3. Tribe said he thinks those modifications might be enough to persuade the justices. “In a very large country, that leaves out a substantial part,” he said.

The Realtors’ attorneys disputed that in Wednesday night’s submission. “The CDC’s semantic recasting of the latest extension — which covers 90% of renters across the country, while leaving intact its ability to ratchet up to 100% — is a distinction without a difference because it has no bearing on the CDC’s legal authority,” they wrote.

At a minimum, the revisions and the new dangers may get the justices to leave the ban in place until billions in already appropriated rental assistance money is teed up to dole out or until Congress takes further action. Biden hinted as much in Tuesday’s remarks, saying he hoped the revived moratorium could give renters a few months of relief while legal challenges were heard in the courts.

“To make that impossible because of something of a legal cloud over what the administration opted to do would be quite irresponsible,” added Tribe, who acknowledged his conversations with the White House but said he wasn’t sure whether he’d have any ongoing involvement in crafting a defense of the policy.

For now, it appears that role will fall primarily to the administration’s top lawyer at the Supreme Court: Acting Solicitor General Elizabeth Prelogar.

Veterans of that office have long expected Prelogar to be nominated to the job on a permanent basis, but six months after Biden’s swearing-in, no nominee for the prestigious post has been announced. That makes it the highest-ranking vacancy in Justice Department leadership that remains without a nominee.

Courtwatchers, meanwhile, are bracing for a showdown in the weeks ahead.

“Biden’s move here definitely puts him on a collision course with the Supreme Court,” said Fallon.