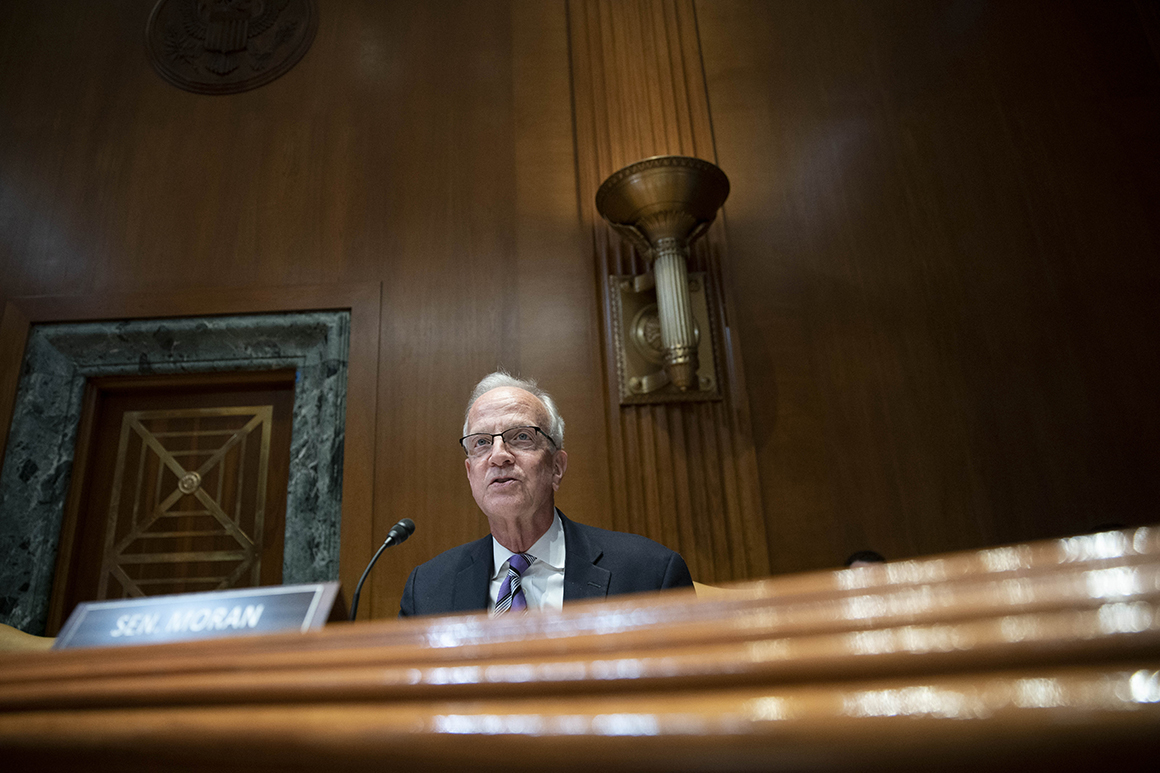 As the Senate’s bipartisan infrastructure gang sticks together on the floor this week, Jerry Moran is conspicuously on the outs.

Among the group of more than 20 senators who weeks ago pledged to support a $550 billion deal on new infrastructure spending, Moran is the only one who voted against moving forward — twice. And now, as the bill nears the finish line, colleagues in both parties are wondering where the affable two-term Kansas senator will come down.

Moran’s support isn’t crucial to passing the bill, but the microscope on him reflects the ongoing push-and-pull between Senate Minority Leader Mitch McConnell’s methodical, straightforward Republican Party and the chaotic, confrontational style of former President Donald Trump. Trump has endorsed Moran’s bid for a third term next year, though the former president also warned he will try to oust any Republican who supports the infrastructure bill. McConnell, on the other hand, has made the jaw-dropping decision to so far support one of President Joe Biden’s top priorities.

No stranger to the spotlight of intra-GOP controversy, Moran is giving few clues how he will vote on the infrastructure deal even as his colleagues privately offer competing predictions. Moran and other Republicans wanted to see bill text and a detailing of the measure’s finances, neither of which were available before two key votes to advance the bill.

“I’m still very interested in seeing a result on a bipartisan infrastructure bill, and hope to be able to be a yes,” Moran said in an interview. “I’m going to talk to my colleagues, finish the analysis, and make a decision as to whether I believe overall this is better for the country to have it.”

Like other Republicans, Moran got spooked when Biden said in June that he wouldn’t sign the bipartisan bill until it was accompanied by a $3.5 trillion Democratic-only spending bill. He’s criticized a similar position from House Speaker Nancy Pelosi and stayed hopeful that moderate Democrats will tank the bigger plan, saying his constituents have a hard time separating the two spending bills.

Moran has also taken hits from former Trump aides this summer for his role in the bipartisan infrastructure bill, with the Coalition to Protect American Workers running ads against him asking him to “stop Biden’s radical plan” to increase IRS enforcement to pay for the proposal. The laid-back senator came back from a recess and complained about the beefed-up IRS provisions in the bill, but even after they were removed he still has not supported it on the floor.

Sen. Jon Tester (D-Mont.), who runs the Veterans Affairs Committee with Moran, said: “I’m sure it got his attention. And he said, ‘Do I really need to fight this fight?’” Moran said the ads didn’t have “much of a consequence. Most people were confused as to what the point was.”

Tester called Marc Short, a former top aide to Trump and former Vice President Mike Pence who founded the CPAW group, a “prick” (the two tangled in 2018 over Trump’s Veterans Affairs nominee). In a statement, Short said his group is “grateful for Senator Moran’s efforts to remove $40 billion to hire additional enforcement agents at the IRS.”

Moran is far from the only senator up in 2022 who could come under scrutiny for his vote on the infrastructure package. Of the Republicans who will face voters next year, only five have supported advancing the legislation: Sens. John Hoeven of North Dakota, Todd Young of Indiana, Chuck Grassley of Iowa, Mike Crapo of Idaho and Lisa Murkowski of Alaska, who was a principal negotiator.

A former GOP campaign chief himself, Young declined to comment on Trump’s vow to back primary challenges to those who supported the bill. And other Republicans up for reelection, like Sen. Marco Rubio (R-Fla.), said the former president’s vocal opposition was not a deciding factor. Trump’s statement came just before the first crucial vote to overcome a filibuster last week.

Moran said he was dining with Sen. Kyrsten Sinema (D-Ariz.) and other senators afterwards when he learned of Trump’s latest threat.

“I didn’t even know he had said that,” Moran said.

Though Moran is neither a Sunday show fixture nor a household name, he’s an integral part of today’s GOP and is an apt test case for the party’s shifting terrain as Republicans consider supporting a bill Biden badly wants. A longtime House member, Moran defeated a colleague in the 2010 Senate primary and then four years later helped win the majority for the GOP as National Republican Senatorial Committee chair.

Then, as he sought reelection, Moran suggested in 2016 he’d meet with former President Barack Obama’s Supreme Court nominee. He immediately faced threats of a primary challenge and backed off, joining the party’s blockade of Merrick Garland. A year later, he and Sen. Mike Lee (R-Utah) torpedoed Republicans’ Obamacare replacement plan, though both ultimately backed a hastily constructed repeal bill that failed on the Senate floor.

“Jerry’s not the most solid decider in the world. Never has been,” said one GOP senator. This same Republican then predicted Moran would ultimately support the infrastructure bill.

Still, colleagues said Moran is thoughtful about his votes on big issues, talking them through with fellow senators and Kansans before coming down. He also generally holds town halls ahead of making big decisions — including recent events during the infrastructure debate.

Sen. Kevin Cramer (R-N.D.), who replaced Moran in the larger group of senators pushing the infrastructure bill, expressed sympathy for his position given Biden’s comments and Pelosi’s pledge to hold the bipartisan bill until she gets the $3.5 trillion social spending package.

“It did violate a trust that’s been I think difficult for Jerry to overcome. And so he’s just becoming a harder person to rebuild the trust with than some of the others,” Cramer said.

While Cramer and other supporters of the package emphasize it’s a separate effort from Democrats’ big social spending bill, that’s not convincing many members of the conference. Current chair of the Senate’s campaign arm Rick Scott (R-Fla.) is a vocal opponent of the infrastructure deal. And some Senate Republicans are warning their colleagues that they could face political consequences for backing the legislation.

“It’s a big mistake for Republicans to support this,” said Sen. Josh Hawley (R-Mo.). “Those who do are going to have to explain why they’re in favor of massive deficit spending … and why they are supporting the Biden agenda, because that’s what this is.”

From the get-go, Moran’s support for the infrastructure bill has been unusual — he was accidentally omitted from the original press release announcing the support of 21 senators. But in Washington, infrastructure is not considered as ideological as issues like immigration, health care or gun safety, which potentially shelters GOP supporters from internal criticism. Moran said his most recent town hall didn’t even include a question about infrastructure.

Still, other members of the bipartisan group have taken notice of Moran’s increased skepticism about its work. And getting Moran back on board is a big priority for the Senate’s latest bipartisan gang when the bill comes to a final vote in the coming days.

“Sen. Moran is in the same place that many of our colleagues are,” said Murkowski. “So my hope is he and his team have taken these past couple of days really scouring it, and sees the benefit for the people of Kansas.”