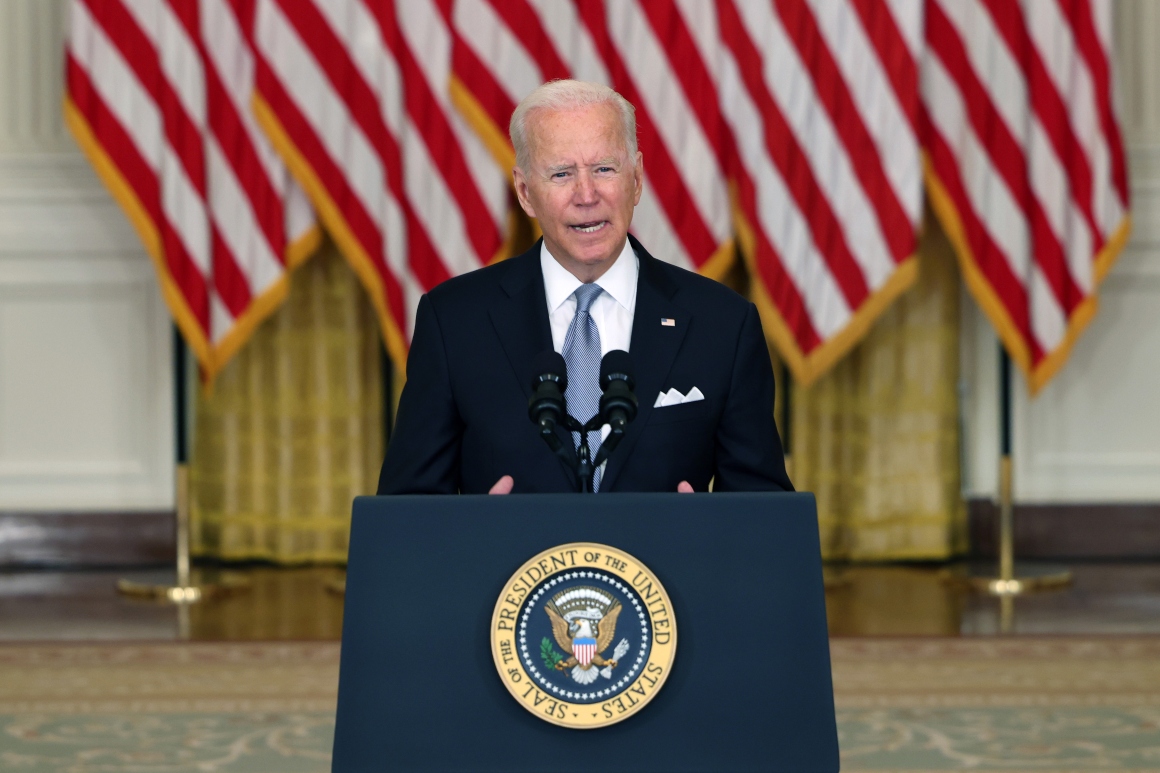 A defiant President Joe Biden on Monday said he did not regret his decision to withdraw American forces from Afghanistan, while acknowledging that the country’s collapse to the Taliban came much sooner than U.S. officials had anticipated.

“I stand squarely behind my decision,” he said from the White House. “The truth is this did unfold more quickly than we had anticipated.”

Biden cast blame on his predecessor, former President Donald Trump, arguing that his administration’s hands were tied by the plan Trump set in motion last year.

He also repeatedly excoriated Afghanistan’s elected leaders and military for not putting up more of a fight against the Taliban. He said that they in essence squandered the time and money America spent to build up its security forces.

Biden even said that it was “wrong” to put Americans in harm’s way to do a job that Afghanistan wouldn’t do itself, and positioned himself as being a leader who was willing to make the difficult call to leave Afghanistan that a generation of Washington officials were incapable of doing. He added that the United States will continue to provide humanitarian assistance and try to exert soft-power influence to improve the conditions on the ground.

“I’ve been clear that human rights must be the center of our foreign policy, not the periphery,” he said. “But the way to do it is not through endless military deployments. It’s with our diplomacy, our economic tools, and rallying the world to join us.”

Biden’s speech comes after a brief trip to Camp David that he cut short due to the disintegrating situation in Afghanistan. However, Biden planned to return to the presidential retreat after the remarks.

The United States on Monday had to temporarily halt all flights out of Hamid Karzai International Airport in Kabul in order to “reestablish security” after a crush of desperate Afghans swarmed around planes there.

There are approximately 2,500 U.S. troops stationed at the airport, a number that will swell to 3,000 in the next few hours and up to 6,000 later this week, Pentagon spokesperson John Kirby said Monday. Biden said those forces are working to secure the airport so that civilian and military flights can resume.

The Biden administration is facing immense pressure from lawmakers and humanitarian groups over the pace at which it was getting people out of the country — in particular Afghan interpreters and other asylum-seekers concerned they will be targeted by the Taliban.

Many of these same people had tried to raise similar concerns for months, prior to the events of the past week, and the rapidly deteriorating situation has only exacerbated their frustration with the White House.

In his speech, Biden said the U.S. is stepping up its efforts to evacuate Afghan allies and their families, while waving off the criticism his administration has received on the matter.

“I know there are concerns about why we did not begin evacuating Afghan civilians sooner,” he said. “Part of the answer is some of the Afghans did not want to leave earlier, still hopeful for their country. And part of it is because the Afghan government, and its supporters, discouraged us from organizing a mass exodus to avoid triggering, as they said, a crisis of confidence.”

Afghan president Ashraf Ghani fled the country over the weekend as the Taliban seized the capital city. In June Ghani met with Biden at the White House and said the country was staring at a pivotal moment in Afghanistan’s history, not unlike the Civil War era in the U.S.

Biden referenced the White House meeting, saying that Ghani failed to deliver what was necessary to prepare Afghanistan after the U.S. and its allies began its exit.

“We had very frank conversations,” he said. “We talked about how Afghanistan should prepare to fight their civil wars after the U.S. military departed, to clean up the corruption in government so that government could function for the Afghan people. We talked extensively about the need for Afghan leaders to unite politically. They failed to do any of that.”

Republicans have seized on the turmoil and characterized it as a calamitous decision by the Biden administration, with some going so far as to call into question the president’s fitness for office.

The president’s team has tried to avert the specter of a so-called “Saigon moment,” one of the most visceral memories of the failures of the Vietnam War, though those comparisons have intensified as scenes of the chaos in Afghanistan unfold.