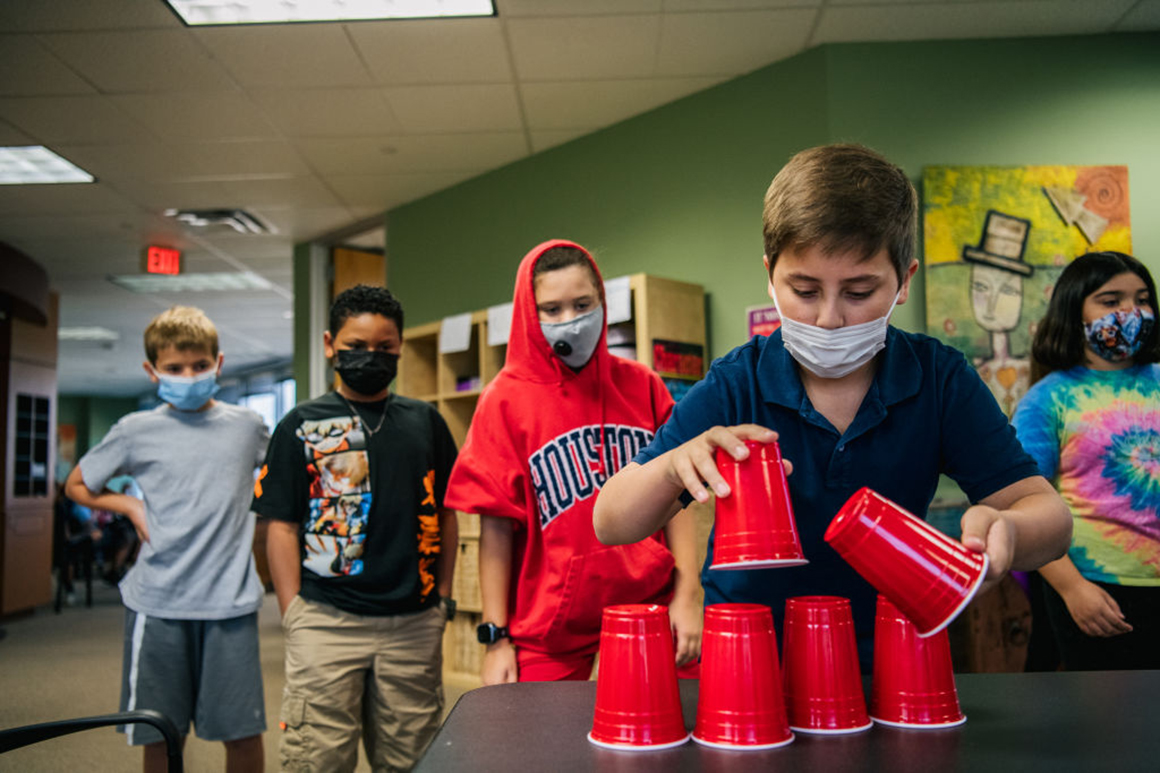 A turf war between Republican governors and the White House over masking in schools is testing the limits of local control.

Arizona Gov. Doug Ducey is offering vouchers and federal money to schools and parents that reject face coverings. Florida Gov. Ron DeSantis is threatening the salaries of school officials who mandate masks. And Texas Gov. Greg Abbott is fighting both mask and vaccine mandates in court.

Now President Joe Biden has stepped into the fray.

The White House is facing two currents of public opinion as Biden prepares to address school reopening with Education Secretary Miguel Cardona in the coming days. Majorities of adults tend to favor mask and vaccine mandates for students and teachers, but polls show hard partisan divides continue to color how the public prefers to keep kids safe.

Governors’ varied approaches to Covid-19 safety protocols this school year reflect those same fractures over what it means to trust the science. Republican state executives increasingly see the fight against masking kids as one of their best chances to show off their political power — and beat Biden on the national stage.

The aggressive tactics and the promise of federal intervention have made for a rocky back-to-school season, as Covid-19 cases among children continue to surge.

“My biggest concern is this is just escalating,” said Chip Slaven, the interim executive director and CEO of the National School Boards Association. “The president is weighing in and trying to support local schools, but it’s yet another tension point. Now you have the federal government, now you have your state government, and now you have the local school boards scratching their heads and saying ‘What do we do?’”

While many Republicans have tied the decision of wearing a mask to personal freedom, some Democratic governors, like California’s Gavin Newsom, are doubling down on requiring face coverings, even when it’s at the chagrin of local officials. Most states — red and blue alike — are supporting local control over statewide mandates.

The president, impatient with states that won’t comply with school masking recommendations from the American Academy of Pediatrics and the Centers for Disease Control and Prevention, has started to use federal power to goad them along. Biden’s administration has threatened federal scrutiny against states that ban mandatory masks for school staff and students, and it’s pledged to backfill money governors cut from defiant local school officials. It’s too early to say if the president’s actions will be enough to get resistant governors on board.

South Carolina Gov. Henry McMaster, a Republican, tweeted that Biden is “more concerned about Republican governors than he is with the Taliban,” after Cardona warned McMaster about blocking school districts from “voluntarily adopting science-based strategies” to limit Covid-19’s spread.

More than 1,000 Covid-19 cases have been reported among South Carolina students and school employees so far this school year.

“We like having our own personal choice, and I think that’s what this whole thing boils down to,” said Debbie Epling, chair of the Aiken County Republican Party in South Carolina. “It goes back to the thing the Democrats say: My body, my choice.”

Close to 60 percent of adults believe students and teachers should be required to wear masks while in school, according to poll results released Monday from the Associated Press-NORC Center for Public Affairs Research. Majorities also support Covid-19 vaccine mandates for teachers and students age 12 and older.

But less than 40 percent of Republicans favor mask or vaccine requirements for students and teachers, compared with roughly 80 percent of Democrats. Those numbers are playing into messaging from Biden and his opponents.

In Arizona, Ducey launched a $163 million federally-funded grant program for qualifying schools that stay open and comply with a state law that outlaws mask mandates and vaccine requirements. A separate $10 million program that low-income families can use for private school tuition, online tutoring or child care carries similar restrictions.

“Safety recommendations are welcomed and encouraged — mandates that place more stress on students and families aren’t,” Ducey said last week in a statement.

After Biden targeted Republican governors this month by directing the Education Department to “use all available tools” for local governments that are trying to ban classroom face coverings, Cardona said local school districts have discretion to use American Rescue Plan funds to implement indoor masking policies and other tactics.

But federal funding may not change the attitude of parents and local school officials who believe mask mandates infringe on each family’s choice for how to protect their kids.

“There are some folks who really feel like they should be able to choose whether they wear a mask or not,” said Hemi Tewarson, executive director of the National Academy for State Health Policy.

“I’m very concerned about the potential uptick in [pediatric cases],” Tewarson said. “I think you’ll see further pushes at the local level to impose masking in schools in order to stay open.”

In Mississippi, where the hospital system is collapsing and nearly 29,000 students are now quarantined because of exposure to Covid-19, Republican Gov. Tate Reeves has refused to enact a mandate for schools. But — still years from facing reelection — he also refuses to ban mask mandates.

“What we say, what we write on the page, what we do doesn’t matter a flip,” Reeves said during a press conference earlier this month. “What matters is how individuals act.”

Republicans governors in Florida, Tennessee and Texas have taken a more hardline approach.

DeSantis, the fiery Florida governor considered a top presidential contender in 2024, has offered parents vouchers to send their children to private schools or a different school district if they object to masks, while Sarasota, Miami-Dade and Broward counties, among others, openly defy his rules.

Tennessee Gov. Bill Lee signed an executive order this month that gives parents the ability to opt their child out of a local mask mandate enacted by a school or health board.

Ken Paxton, the attorney general in Texas, sued San Antonio’s school district to block a recently-enacted vaccine requirement for its employees. The Texas Legislature made Abbott — not county judges, city mayors or superintendents — the leader of the state’s response to statewide emergencies, Paxton argued.

Dallas, Bexar, Harris and Travis counties, home to some of Texas’ biggest cities, filed lawsuits this month to protect face covering requirements for students, faculty and staff at K-12 schools.

“I think he’s trying his best to get to the right of [primary challengers], but I don’t know that he can do that,” said Wolff, who challenged Abbott’s ban on mask mandates in court.

Some governors imposing mask mandates are also fighting parents and school districts within their states that are demanding kids be mask free.

Louisiana’s Gov. John Bel Edwards, a Democrat, is standing by a statewide mask mandate for schools despite pushback from angry families and school board members.

In Oregon, where some school boards have passed resolutions opposing the state’s K-12 mask mandate, Democratic Gov. Kate Brown sent a warning to superintendents and school trustees reminding them that there is “no ambiguity” in the law, and that it can be enforced by the state’s Occupational Safety and Health Administration.

“Flouting mask requirements will put everything we have worked towards in the last year at risk,” Brown said in a letter to school officials.

In California, where all educators and school staff must be vaccinated or tested, Newsom imposed a universal mask mandate for schools in July even before the CDC’s recommendation. The recall-threatened governor has faced some backlash for the decision from red pockets of the state that see it as an authoritarian overstep. Parent groups and the Orange County Board of Education have filed lawsuits over the matter, though similar efforts have failed in the past.

The disconnect leaves Biden to confront what’s become “a very heterogeneous and very disjointed approach to getting kids back to school,” said Yvonne Maldonado, a professor of epidemiology at Stanford University and the chair of the committee on infectious disease for the American Academy of Pediatrics.

“In the meantime, there’s really nothing that can be done at the federal level,” she said.
“There are some things, but really only Band-Aid approaches.”