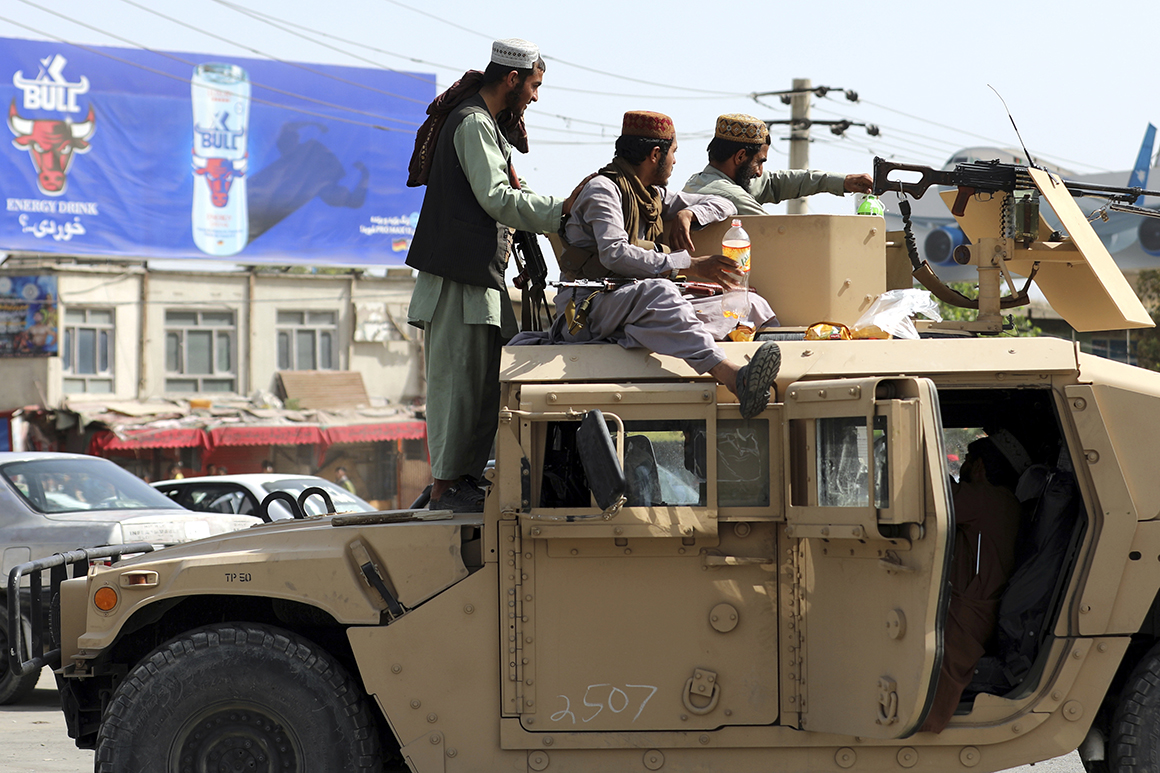 Military planners sounding the alarm about Afghanistan’s imminent collapse failed to predict the speed with which the Taliban would overrun the country, leaving the Biden administration scrambling to evacuate thousands of American citizens, embassy staffers and vulnerable Afghans from Kabul’s international airport.

Though officials warned repeatedly over the past few weeks that the Afghan government could fall far sooner than previous estimates — weeks or months after the last American troops depart the country — they overestimated the capability and will of the Afghan security forces to fight back as the Taliban seized city after city in recent days, defense officials, speaking on condition of anonymity to discuss sensitive planning, told POLITICO.

In fact, DoD officials briefed lawmakers last month on the intelligence assessment that the combination of Afghan special commandos, air force and local militias could hold off the Taliban long enough for a political settlement, according to a senior Democratic aide with knowledge of the briefings.

The intelligence was “overstated,” the person said.

“The Taliban not only was planning this offensive, but was working the tribal/ethnic divisions to be able to secure control quickly for a long time,” the person said.

That miscalculation reached the very highest levels of the administration, Jake Sullivan, the national security adviser, acknowledged during a TV interview on Monday morning.

“The president didn’t think it was inevitable the Taliban would take control. He thought the Afghan forces could fight,” Sullivan said on ABC’s “Good Morning America.” “We spent 20 years, tens of billions of dollars training them, giving them equipment, giving them support of U.S. forces for 20 years. When push came to shove, they decided to not fight for their country.”

The Taliban have been seizing territory across Afghanistan since President Joe Biden announced in April that all U.S. troops would depart the country by Sept. 11, a deadline he later revised to Aug. 31. But officials initially expressed optimism that the Afghan security forces could hold out against the group’s advance by consolidating around the country’s urban population centers.

“The Afghan Security Forces have the capacity to sufficiently fight and defend their country,” said Gen. Mark Milley, chair of the Joint Chiefs of Staff, in July. “I don’t think the end game is yet written.”

However, he warned that the American withdrawal and Taliban advance would be “a test now of the will and leadership of the Afghan people, the Afghan Security Forces and the government of Afghanistan.”

That warning proved prophetic — although the end came much faster than military planners expected. The Taliban gained significant momentum in recent days, seizing control of 12 of Afghanistan’s 34 provinces and 14 of its provincial capitals in the weeklong period that ended Friday as Afghan security forces laid down their weapons and fled without a fight. By Sunday, Afghan President Ashraf Ghani had left the capital.

“They didn’t so much fall as fail to fight,” one defense official told POLITICO. “You can train and resource and support, which we did, but you can’t buy will.”

Kabul erupted in chaos over the weekend as the Taliban swept into the city. The Pentagon scrambled to send military helicopters to evacuate diplomats and staffers from the U.S. Embassy to Hamid Karzai International Airport, one of the last remaining hubs of American presence after the rapid drawdown. At least three people were killed by gunfire on Monday morning at the airport, where thousands of desperate Afghans are begging for flights out of the country to escape the Taliban.

In the end, intelligence assessments from earlier this year estimating that the Afghan government could hold out for six to 18 months after the U.S. withdrawal proved spectacularly wrong. Planners underestimated the effectiveness of the Taliban’s strategy and believed — incorrectly, it turned out — that the Afghans would fight to hold territory as American forces departed.

Experts blamed both the Trump and Biden administrations’ precipitous withdrawals for the disaster that unfolded across the country last week.

“The combination of these four factors: a weak peace deal tilted in the Taliban’s favor and that undermined the Ghani government; disunity of the Afghan political elite; an abrupt withdrawal of U.S. forces and contractors; and the Taliban’s Pakistani safe haven all contributed to the rapid Taliban victory we just witnessed,” said Lisa Curtis, who served as the top National Security Council official overseeing South and Central Asia under the Trump administration.

For months, senior Pentagon officials have warned both Trump and Biden that a premature, unconditional withdrawal from Afghanistan would likely end in a Taliban takeover. Former Defense Secretary Mark Esper, who Trump fired in part due to his opposition to a hasty withdrawal from Afghanistan, recommended the administration suspend its departure until the Taliban started meeting the conditions of the peace deal, he wrote on Twitter on Sunday night.

“This outcome was not inevitable,” Esper wrote. “By pressing for a precipitous withdrawal of U.S. forces, rather than leveraging that military muscle to compel Taliban compliance with the 2020 peace agreement, both presidents hastened the Afghan government’s collapse.”

After Biden took office, Defense Secretary Lloyd Austin and top generals urged the president to leave a small force of roughly 3,000 troops to continue counterterrorism operations and as leverage to force the Taliban to negotiate a power-sharing agreement with the Afghan government, POLITICO reported.

Biden listened to their advice, but in the end decided to end America’s longest war. Asked in July whether a Taliban takeover was inevitable, he responded: “The Afghan troops have 300,000 well-equipped [soldiers] — as well-equipped as any army in the world — and an air force against something like 75,000 Taliban. It is not inevitable.”

Since then, military and intelligence officials revised the initial assessments as the Taliban overran huge swaths of the country, said one senior defense official familiar with the discussions. Still, officials predicted the Ghani government would last weeks or months — not days.

“There was not consensus among the intel community, and things were moving fast,” the first defense official said.

Alexander Ward contributed to this report.