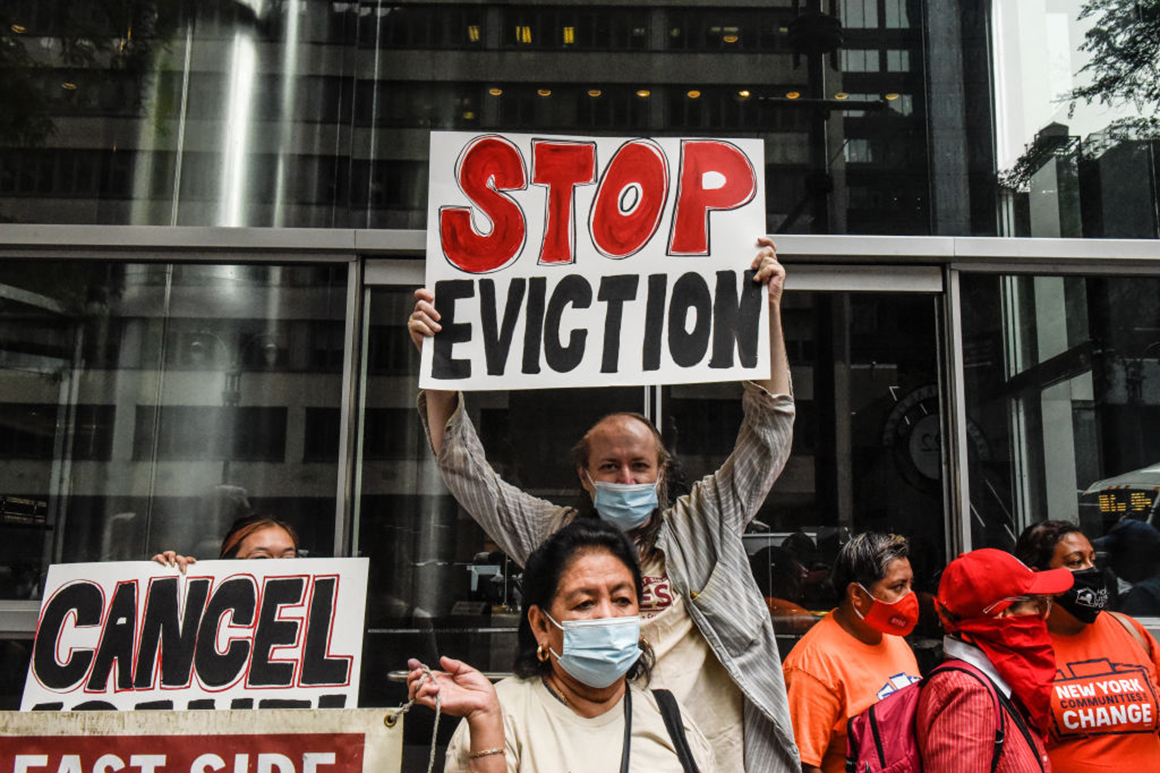 Trade groups representing property owners are planning to sue to block a new federal eviction moratorium that President Joe Biden himself warned this week was on shaky legal ground, according to two sources familiar with the matter.

The Alabama and Georgia chapters of the National Association of Realtors are expected to file a motion in federal court seeking to halt the ban that the Centers for Disease Control and Prevention ordered Tuesday, the sources briefed on the plans said. The groups also led a legal challenge against the prior federal eviction moratorium that expired Saturday — a lawsuit that prompted the Supreme Court to cast doubt on the CDC’s authority.

Landlords are poised to take on the Biden administration again after warning that they lost billions of dollars each month under the earlier ban, which the CDC first implemented in September. The revamped moratorium the agency imposed this week is targeted at areas with high levels of Covid-19, currently about 80 percent of counties.

A coalition of 11 housing industry groups — including the Mortgage Bankers Association and the National Association of Home Builders — said in a statement Wednesday evening that they opposed the new ban and that “the administration itself noted it lacks the legal authority for a more targeted eviction moratorium.”

“About half of all housing providers are mom-and-pop operators,” National Association of Realtors President Charlie Oppler said. “Without rental income, they cannot pay their own bills or maintain their properties.”

The new legal challenge will fuel further chaos around the federal government’s safety net for renters still struggling to pay bills during the pandemic. It will likely set off a race against time for policymakers to find ways to accelerate the release of $46.5 billion in rental aid, which was designed to backstop renters and make landlords whole but has faced severe state and local bottlenecks.

“NAR has always advocated the best solution for all parties was rental assistance paid directly to housing providers to cover the rent and utilities of any vulnerable tenants during the pandemic,” Oppler said. “No housing provider wants to evict a tenant and considers it only as a last resort.”

Biden allowed an earlier iteration of the eviction moratorium to expire Saturday because of a Supreme Court warning that the CDC exceeded its authority. But the White House reversed course this week and enacted a more targeted ban in response to a major backlash from Democrats who warned millions of Americans were at risk of losing their homes.

The administration initially tried to put the responsibility on Congress to extend the moratorium, but House Democrats could not muster the votes to pass an extension before leaving for August recess. The legislation was also expected to be blocked by Senate Republicans.

The new eviction ban the CDC announced Tuesday is scheduled to last until Oct. 3 and applies to counties experiencing high levels of community transmission of Covid-19. The Biden administration scaled back the scope of the ban as it scrambled to come up with a new safeguard for renters.

But the revamped moratorium still left landlords “irate,” said National Apartment Association President and CEO Bob Pinnegar. Property owners were livid over the about-face after the CDC said in June that an eviction ban renewal through July was intended to be the final extension.

Biden said Tuesday that “any call for a moratorium based on the Supreme Court’s recent decision is likely to face obstacles.” But White House press secretary Jen Psaki on Wednesday said that “the president would not have supported moving forward if he did not support the legal justification.”

The White House did not respond to a request for comment on the anticipated legal challenge Wednesday.

“We were really just a pawn in this process,” Pinnegar said of landlords’ reaction to the back-and-forth. “Looking back at it, it appears to me that this was more about keeping together the Democratic caucus in the House for the upcoming infrastructure bill than anything else. And so definitely, there’s a lot of frustration on the part of the industry.”

The industry groups’ new legal motion is expected to go before U.S. District Judge Dabney Friedrich in Washington, D.C. She gave landlords a win in May when she ruled in an earlier lawsuit that the CDC had overstepped its authority in imposing the first ban. That case is still on appeal. Friedrich granted a stay of her own decision while it was pending, prompting the housing industry groups to petition the Supreme Court in June in a bid to end the moratorium.

In response to a request for emergency intervention from the trade associations, the Supreme Court in a 5-4 decision on June 29 allowed the moratorium to continue until its expiration last Saturday. But Justice Brett Kavanaugh — who had joined the liberals on the court to uphold the ban — warned in his concurring opinion that the CDC had gone beyond its legal power and that the imminent expiration was what motivated him to let it stand temporarily.

“In my view, clear and specific congressional authorization (via new legislation) would be necessary for the CDC to extend the moratorium past July 31,” Kavanaugh wrote.

After lawmakers were unable to pass legislation to revive the ban last week, Speaker Nancy Pelosi (D-Calif.), Rep. Cori Bush (D-Mo.) and other Democrats pressed the administration to reverse course. The White House stood its ground for a few days, with senior adviser Gene Sperling telling reporters Monday that the administration had “double, triple, quadruple checked” its options but that the CDC could not find the legal authority.

Psaki told reporters Wednesday before the lawsuit was filed that Biden’s comments about legal obstacles should not be understood to mean the ban was vulnerable to court challenges.

“This is a narrow, targeted moratorium that is different from the national moratorium,“ Psaki said. “This is not an extension of that.”