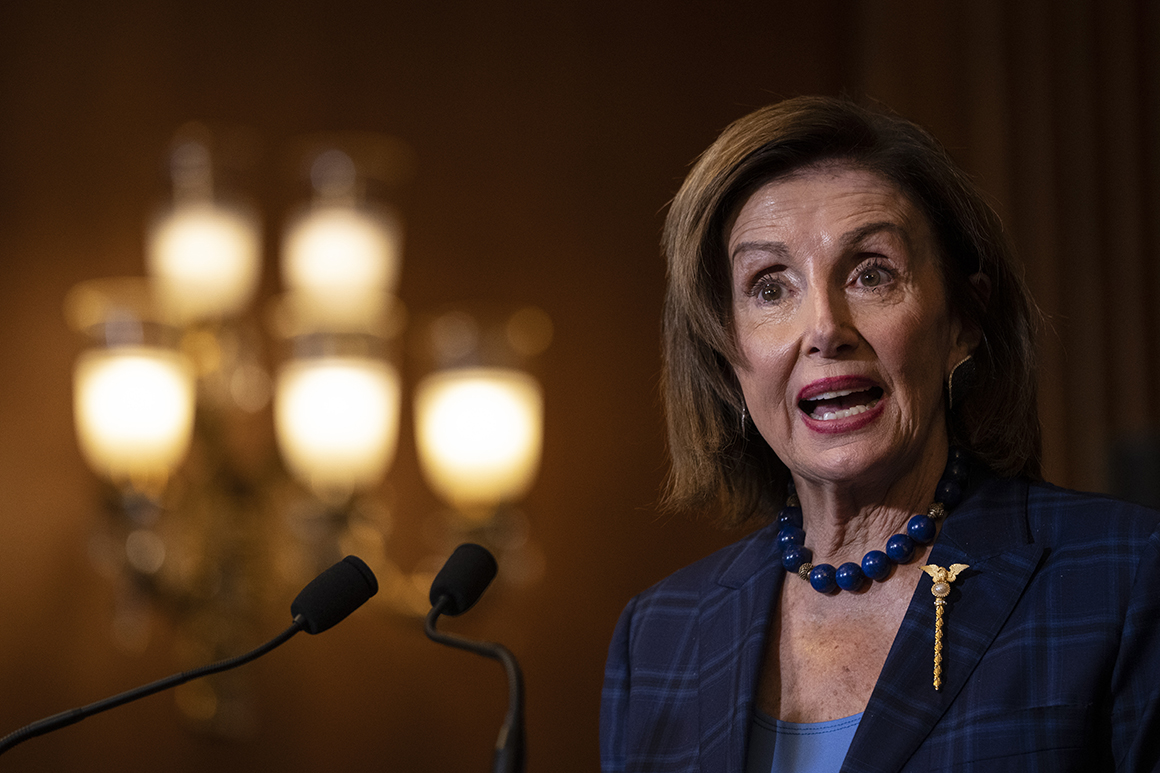 Speaker Nancy Pelosi and the leader of a group of 10 centrist defectors white-knuckled their way through last-minute deal-making on Monday night as both sides searched for a deal that would end their stalemate and clear the way for passage of a $3.5 trillion budget framework.

Rep. Josh Gottheimer (D-N.J.), the de facto leader of the moderate opposition to Pelosi’s strategy, met with the top three House Democratic leaders for more than an hour on Monday evening to discuss a deal the speaker offered that would commit to House passage of a bipartisan infrastructure bill by Oct. 1. But some in Gottheimer’s group quickly balked at the plan, leaving Pelosi and her team to gauge their appetite for a potential floor fight on President Joe Biden’s domestic agenda.

As the group of moderates met to debate the offer, Pelosi and other top Democrats made a forceful pitch to the rest of the caucus about why they should support the upcoming vote.

“We cannot squander this majority and this Democratic White House by not passing what we need to do,” Pelosi told Democrats in a private caucus meeting Monday. “Right now, we have an opportunity to pass something so substantial for our country, so transformative we haven’t seen anything like it.”

Gottheimer told reporters he was “still working” on it as he hopped onto the floor for votes Monday evening. While Gottheimer was open to the offer floated by Pelosi, some other members of his group were opposed after he presented the contours of Pelosi’s deal to his handful of fellow holdouts, according to Democrats familiar with the conversations.

Pelosi’s proposal would fast-track passage of the budget resolution that unlocks a massive social spending plan with a price tag as high as $3.5 trillion, coupled with a vow to approve the Senate’s bipartisan infrastructure bill by the time current surface transportation programs expire.

Until now, the centrists have vowed to tank the spending framework unless they get an immediate, standalone vote on the infrastructure bill.

But several of the moderates were particularly incensed by a wonky maneuver that would wrap consideration of the ground rules of debate and the budget resolution itself into one vote, rather than the original plan that required two votes to advance the spending bill. After a few of them balked at Pelosi’s initial offer, Gottheimer returned for his second round of meetings with leadership and then shuttled back to his fellow centrists.

Frustrated members were told to linger as the clock ticked closer to midnight Monday but received little else in the way of updates about a potential vote.

The pushback also grew in size Monday, as Rep. Stephanie Murphy (D-Fla.) announced her opposition to moving ahead on the budget framework without first passing the infrastructure bill. Murphy’s opposition was not a surprise to leadership as she had been quietly trying to hammer out a deal for several days in tandem with Gottheimer’s public effort.

As the group of moderates debated what to do, Pelosi and her leadership team made an aggressive pitch for Democratic unity in a caucus meeting that ran high with emotions.

House Majority Leader Steny Hoyer followed her, telling Democrats they needed to “come to grips” with the situation and band together or else nothing would get accomplished.

“We need to trust one another … this is mutually assured destruction,” Hoyer said.

“You all have to vote for the goddamn rule,” House Rules Chair Jim McGovern (D-Mass.) added, to cheers and applause in the room. “Why wouldn’t we begin this process? Whether we pass it today or on Oct. 1, none of the money can be spent until Oct. 1.”

Rep. Susan Wild (D-Pa.), a frontliner who is supportive of leadership’s plan, spoke up in the meeting to urge more Democrats in tough districts to also get on board. Wild said without the social spending plan, the number one issue to her district — lowering prescription drug prices — is “dead in the water.”

“I am not running for Congress to just take safe votes,” she said, according to Democrats in the room.

Other rank-and-file Democrats then stood up to speak, with each member “angrier” than the last, according to sources in the room, as frustrations with the small faction of moderates boiled over.

One Democratic member could even be heard just off mic called the group “fucking assholes.”
The caucus meeting was temporarily paused as members went to the floor to vote on unrelated legislation. Pelosi and her leadership team huddled while others including Beatty, House Majority Whip Jim Clyburn (D-S.C.) and Rep. Henry Cuellar (D-Texas), another one of the centrist holdouts, spoke with Gottheimer.

The caucus meeting was set to reconvene after the first series of votes Monday evening, teeing up a potentially long night in the House as Pelosi and other top Democrats debated whether to force the vote on the budget resolution later, essentially daring the centrists to vote no on the floor.

The tense discussions Monday come after a weeks-long standoff between Pelosi and the group of moderates. Pelosi — not one to respond well to rank-and-file demands — has for weeks refused to divert from her plan to first pass the Biden-blessed $3.5 trillion bill that’s set for passage through the filibuster-proof maneuver known as budget reconciliation, a process expected to take weeks or even months.

Pelosi released a letter over the weekend meant to appease the centrist group in some ways. The speaker laid out a timeline for passing both the infrastructure bill and reconciliation package by Oct. 1. She also vowed that while the budget framework would be written to the agreed-upon $3.5 trillion top line, the resulting spending bill also would be “paid for” — as lawmakers privately say that the latter promise effectively negates the former spending target.

But the group of moderates remained in close communication over the weekend, affirming to each other that they all remain opposed to supporting the party’s budget on the floor even as speculation rose that some might cave. They privately said Pelosi’s letter did little to quell their fears about a delayed infrastructure vote — or of the caucus’ left wing holding the Senate deal hostage to secure their own demands for the bigger spending package.

Sinema and Sen. Joe Manchin (D-W.Va.) both supported the budget resolution setting up a spending bill as large as $3.5 trillion but have declined to commit to supporting that final top-line number when it’s turned into formal legislation.

Manchin on Monday urged the House to “put politics aside” and vote on infrastructure “swiftly.”

Anthony Adragna and Burgess Everett contributed to this report.