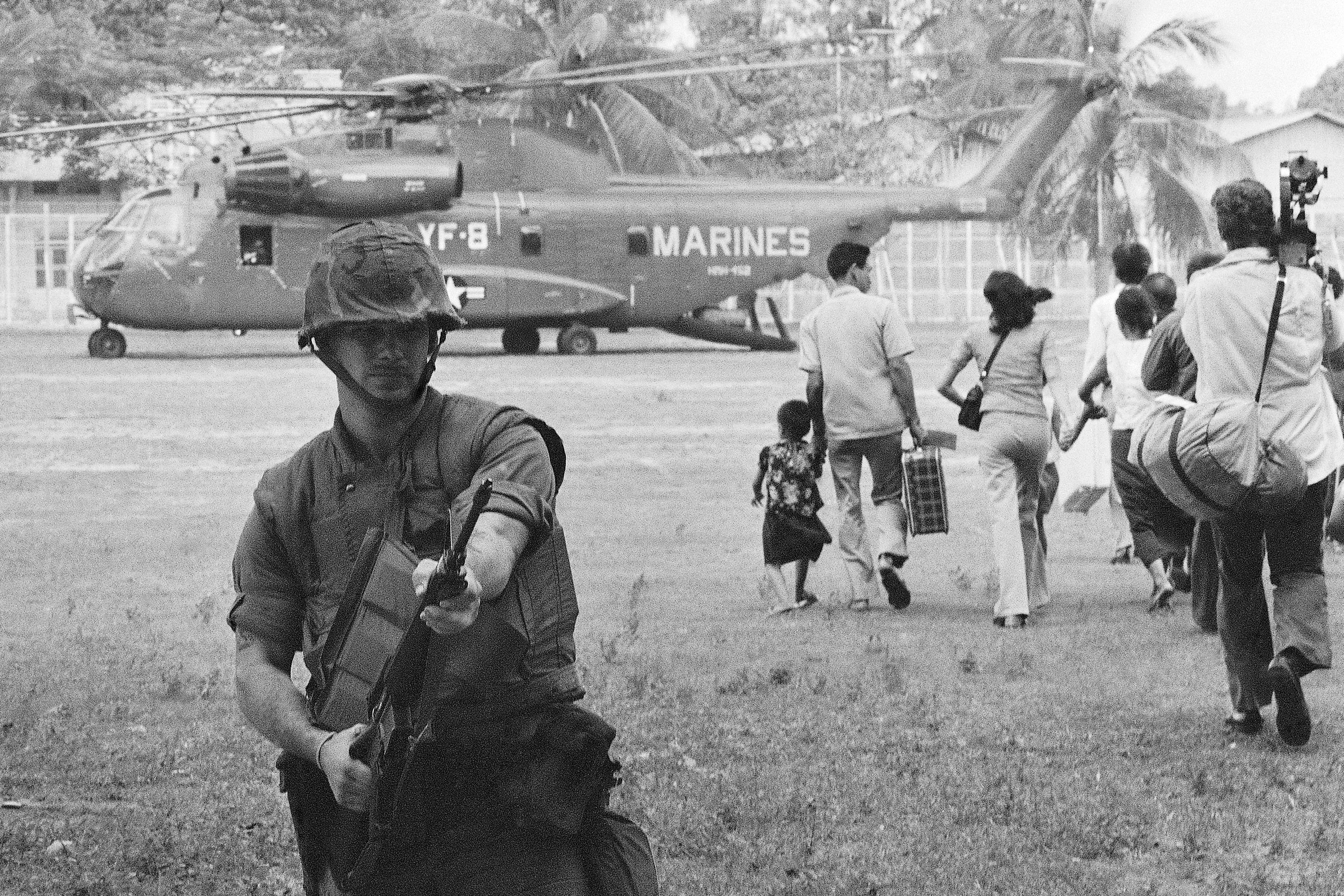 My mother called on Monday to ask if I was watching the news.

“It’s so scary,” she said, her voice specked with sadness. “All the Afghan people fleeing, running this way and that way. Everyone so desperate to escape. That was us.”

Kabul had fallen and the images that vibrated from my mother’s television screen thrust her backwards into the past. Even though it hurt to watch, she couldn’t look away: scenes of Afghans so desperate to escape the certain brutality of reinvigorated Taliban rulers that they clung to the landing gear of an American military plane, as hundreds of others raced down the runway, shalwar kameezes flapping in the draft as the plane took off, canting skyward away from war and the ruins of another bungled American nation-building project.

As we watch the tragedy of Afghanistan continue to unfold, thousands of Cambodian refugees in America and across the globe are freshly triggered by scenes of Taliban fighters toting AK-47s in truck beds, victorious smiles etched on their faces, and of over 800 terrified Afghans crouching elbow-to-elbow in an American C-17 meant to transport less than a quarter of that number.

The events in Afghanistan over the past week have evoked comparisons to the U.S. war in Vietnam—perhaps most poignantly, the infamous scramble to evacuate the embassy in Saigon in 1975. But just a few weeks prior to that, the U.S. also evacuated its embassy personnel from Cambodia’s capital city of Phnom Penh, just 140 miles to west, as Communist Khmer Rouge soldiers closed in, preparing to take power.

Those refugees who were able to escape with American colleagues on April 12, 1975, as well as those like my family who fled by sea five days later, saw history repeating itself this week. The echoes can be heard not just in the years of failed U.S. intervention and the mad dash to get out, but also in the new lives that many refugees, scarred both by what they saw and what they will not be able to witness unfolding back home, are about to begin.

For the Afghans who are lucky enough to leave, if their experience turns out like mine, what will follow them out of their burning country is survivor’s guilt and the kind of trauma that will live not only in their minds and hearts, but in their bodies. They will need to make a new life in a country where some will welcome them with open arms and others will treat them as outsiders. I know. It happened to me and my family.

On April 17, 1975, it was my family jostling to find space aboard an overcrowded Cambodian naval ship when the U.S.-backed Lon Nol government capitulated to the Khmer Rouge. Because my father worked as an accountant in the Cambodian Navy, our family was allowed one of the coveted spots on the U.S.-made vessel. Then-President Richard Nixon, with Henry Kissinger as his secretary of state, had illegally extended the Vietnam War into neighboring Cambodia, bombing villages along my home country’s border in an effort to rout Vietcong and Khmer Rouge soldiers. But the American pilots often missed, obliterating villages and killing hundreds at a time; as many as 500,000 Cambodians had died in America’s secret bombing campaign by 1974.

I was a baby when I was severed from my homeland. Growing up in the safety and beauty of a small town in Oregon, where strangers filled our apartment refrigerator with food and volunteered to help my parents and relatives find jobs, and enroll us kids into school, I nonetheless felt the weight of my family’s escape from war. I felt it in the way my mother’s whole body heaved with grief when news arrived in the 1980s of relatives who had died in the genocide. (The Khmer Rouge killed about 2 million Cambodians between 1975 and 1979.) I felt it in my father’s absence from our lives as he dedicated all of his energy and evenings to filling out immigration forms to bring survivors of the genocide to America. I felt it in my mother’s sense of indebtedness to the United States—a complicated debt toward a country that bombed ours, but then allowed us asylum so we could start new lives.

In America, my parents’ trauma became mine, passed down like inheritance. My mother keeps three freezers full of discount meat, rationalizing that we must always be prepared—but I know it’s because hunger hunted her for the 23 days we spent at sea. I do the same, relentlessly anxious there will not be enough food. My father and I both flinch when we hear a sunglass case slam shut, simple, everyday sounds that come into our ears too much like the pop of shots going off. Trauma rivets itself to both memory and muscle. When my mother called on Monday, I felt the fear that had lodged somewhere deep inside her all those years ago when she, like the Afghan women she saw on the news, was clutching a baby and a bag and sprinting for safety.

That trauma—and a relentless need to tell the story of war—was one of the reasons I became a journalist. That’s how I found myself in Kabul in 2008. I worked with media professionals in a training program focused on building investigative reporting skills. After class, the female students nervously approached me and whispered into my ear: the Taliban left another night letter, threatening their lives for doing “the job of a man.” They kept coming to my trainings and writing their stories anyway.

Over the past week, my mother and I have lost sleep for different reasons—her, because the memories of fleeing Cambodia have raced back, crystal clear; me, because I worry about her and how she is being triggered, and about the female journalists I worked with in Afghanistan, who showed me a deeper kind of courage, who are now among the Taliban’s top targets.

Soon, the news cycle will shift, the images of a crumbling Afghanistan replaced by the next natural disaster, the next pandemic, the next war. For Americans who have never had to flee their homes, whose hearts do not reverberate with the thud of bombs and staccato of gunfire, this day, these images are easy enough to forget. For refugees, like me and my family, it is one more reminder of the elongated limbs of war, how it reaches greedily across the years, contaminating subsequent generations with trauma.

I think about the disorientation and dislocation the Afghan refugees may feel, and worry about the discrimination they may face as they begin to settle in communities across the U.S., particularly when our nation remains so polarized over issues of immigration. I fear that as they begin new lives in America, they will one day learn of the human catastrophe unfolding back home and weep helplessly, as my mother did.

I grew up in a culture that gave my parents, and by extension me, no outlet to convey the stress and strain of starting over in a foreign country and the homesickness that comes with being a refugee. I grew up in a family that lacked both the vocabulary and license to speak of topics like depression and PTSD, even though I eventually found my way to these words that described the chaos and conflict inside of me. In bigger cities, like Seattle, culturally sensitive support groups were set up to help Cambodian refugee women process their emotions and experiences of war. But where I grew up, such programs did not exist.

I hope for Afghan refugees who arrive in America, there will be a place or a person to help them process the pain of being torn from their country and loved ones.

I’m buoyed when I hear from a friend there is already a sign-up to volunteer to help Afghan refugees who have arrived in recent days in Washington State. I sign up and spread the word.

“You must go,” my mother says. “People helped and welcomed us.”

Let it be this way then, that we do all that we can to help and welcome the Afghans who must make new lives in our midst, far from home. It is the least we can, and the thing we must, do.