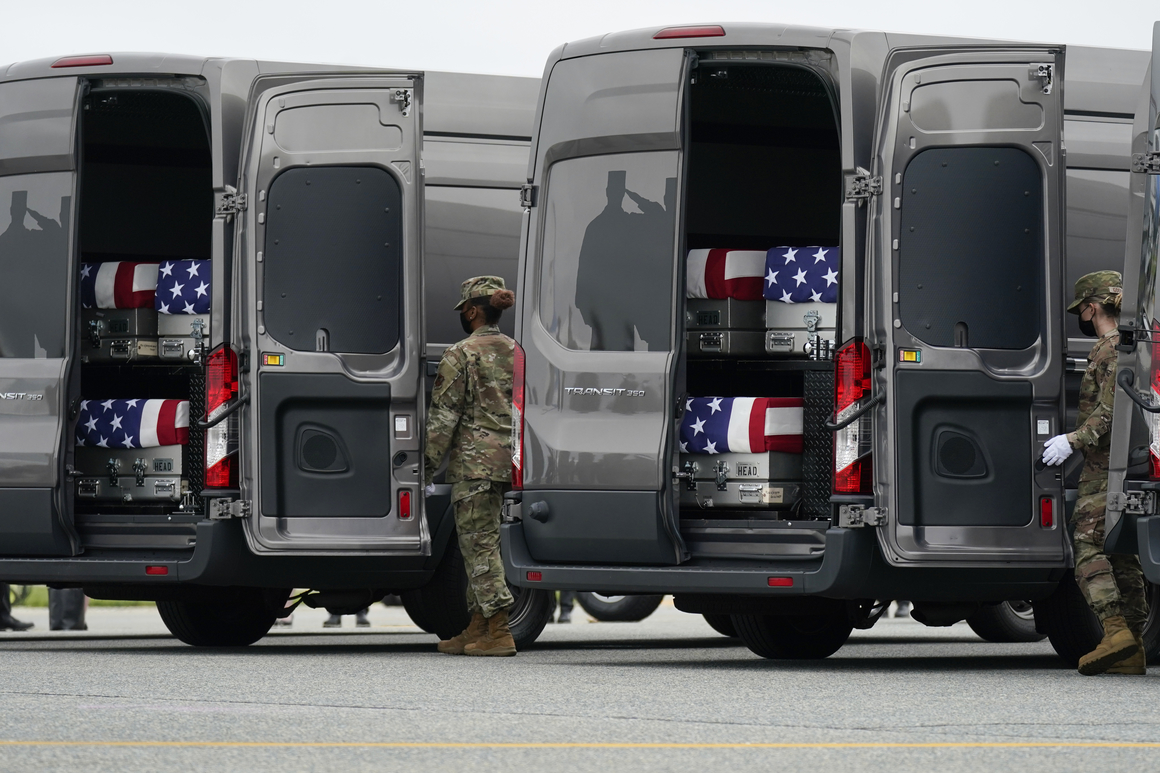 Just 24 hours before a suicide bomber detonated an explosive outside Hamid Karzai International Airport, senior military leaders gathered for the Pentagon’s daily morning update on the deteriorating situation in Afghanistan.

Speaking from a secure video conference room on the third floor of the Pentagon at 8 a.m. Wednesday — or 4:30 p.m. in Kabul — Defense Secretary Lloyd Austin instructed more than a dozen of the department’s top leaders around the world to make preparations for an imminent “mass casualty event,” according to classified detailed notes of the gathering shared with POLITICO.

During the meeting, Gen. Mark Milley, the chair of the Joint Chiefs of Staff, warned of “significant” intelligence indicating that the Islamic State’s Afghanistan affiliate, ISIS-K, was planning a “complex attack,” the notes quoted him as saying.

Commanders calling in from Kabul relayed that the Abbey Gate, where American citizens had been told to gather in order to gain entrance to the airport, was “highest risk,” and detailed their plans to protect the airport.

“I don’t believe people get the incredible amount of risk on the ground,” Austin said, according to the classified notes.

On a separate call at 4 that afternoon, or 12:30 a.m. on Thursday in Kabul, the commanders detailed a plan to close Abbey Gate by Thursday afternoon Kabul time. But the Americans decided to keep the gate open longer than they wanted in order to allow their British allies, who had accelerated their withdrawal timeline, to continue evacuating their personnel, based at the nearby Baron Hotel.

American troops were still processing entrants to the airport at Abbey Gate at roughly 6 p.m. in Kabul on Thursday when a suicide bomber detonated his explosive vest there, killing nearly 200 people, including 13 U.S. service members.

In the week before the attack, President Joe Biden and top administration officials repeatedly spoke in public about the general threat ISIS posed to the airport. Biden even cited that threat as a reason not to extend the military mission beyond Aug. 31. The president warned this weekend that an additional ISIS attack was “highly likely.”

This account of the internal conversations among top Pentagon leaders in the hours leading up to Thursday’s attack at the airport is based on classified notes from three separate calls provided to POLITICO and interviews with two defense officials with direct knowledge of the calls. POLITICO is withholding information from the Pentagon readouts that could affect ongoing military operations at Kabul airport.

The transcript of these three conference calls, authenticated by a defense official, details conversations among the highest levels of Pentagon leadership. It makes clear that top officials were raising alarm bells and preparing for a potential attack that they had narrowed down to a handful of possible targets and a 24-48 hour time frame — projections that ended up being deadly accurate.

“This story is based on the unlawful disclosure of classified information and internal deliberations of a sensitive nature,” Pentagon spokesperson John Kirby said in a statement. “As soon as we became aware of the material divulged to the reporter, we engaged Politico at the highest levels to prevent the publication of information that would put our troops and our operations at the airport at greater risk.”

“We condemn the unlawful disclosure of classified information and oppose the publication of a story based on it while a dangerous operation is ongoing,” he continued.

The intelligence about the security threat at Kabul airport detailed on the calls was relayed up and down the chain of command, according to a second defense official, speaking on condition of anonymity to discuss top-secret conversations. The White House took the threats seriously and supported the commanders taking action as they deemed fit, the official said, adding, “There was no micromanagement from Washington of the effort to try to prevent this [attack].”

Measures to avert an imminent attack included closing two airport gates permanently, notifying Taliban checkpoints of the potential threat and asking them to account for it in their screening procedures, limiting foot and vehicle traffic through a number of gates, and issuing alerts to American citizens warning them of specific threats at specific locations, the official said.

But ultimately, there was no way to “eliminate the threat completely,” the person said.

“U.S. forces at HKIA were aware of and accounting for a variety of threats, and exercising extreme vigilance,” the official said, using an acronym for the Kabul airport. “We took numerous actions to protect our forces and the evacuees, but no amount of effort will completely eliminate the threat of a determined enemy.”

Frustration with the Taliban

Austin kicked off Wednesday’s discussion by saying the threats would increase in the next 24-48 hours, and instructed his team to remain “laser-focused” on evacuating American citizens from the city. The day before, U.S. and coalition forces had flown a total of 19,000 people from Kabul in military and commercial aircraft, the Pentagon said.

Rear Adm. Peter Vasely, the commander of American forces in Afghanistan, and Maj. Gen. Christopher Donahue, the commanding general of the 82nd Airborne Division, called in from the Kabul airport to detail threats to three airport gates, where U.S. troops were moving in Americans and Afghans slated for evacuation. Along with Abbey Gate, the South and West Gates were also under threat, they said, according to the written notes of the call, which did not identify which of the two was speaking.

According to the notes, Vasely and Donahue discussed how the Taliban were undertaking additional security measures and pushing back the crowds outside the airport due to the threat. Throughout the evacuation effort, the Taliban have instituted curfews and expanded the security perimeter around the airport in an effort to help the Americans increase security, the defense official said.

But the military leaders on the call expressed frustration with the Taliban’s persistent lack of cooperation, noting that militants were turning potential evacuees away at the gates.

Since the American military team in Kabul last engaged directly with Abdul Ghani Baradar, the leader of the Taliban, “it takes more bandwidth to get things moving,” Vasely and Donahue said, according to the written notes of the call.

“If a person wants to leave but they get turned away by [the Taliban] at [the Ministry of Interior meetup] location, we have instructed them to call us 24/7,” they said, according to the notes of the meeting.

The team had “frequent and constant communications with the Taliban” multiple times a day to try to resolve issues as they cropped up, the defense official told POLITICO. “Many times they were successful, but that doesn’t mean that in subsequent hours or days we wouldn’t have a similar problem pop up again.”

‘We probably ought to listen’

After the early Wednesday morning meeting ended, a smaller group including Austin, Central Command chief Gen. Frank McKenzie, and Colin Kahl, the Pentagon’s top policy official, convened at 9 a.m. to continue the conversation, with McKenzie calling in from his Tampa headquarters. Austin once again expressed his alarm about the imminent attack.

“We probably ought to listen when you have a former [Joint Special Operations Command] and SEAL commander on the ground saying it’s high risk,” Austin said, referring to Vasely. Vasely and Donahue were not described as being on the call.

According to the classified call notes, McKenzie made clear the Americans did not have much of a choice in relying on the Taliban for securing the evacuees. And he predicted the militants would be less willing to help the U.S. military effort the longer they stayed in Kabul, even as the threat from ISIS-K increased. The Taliban and ISIS-K are sworn enemies and defense officials have repeatedly said they have no reason to believe the two groups are collaborating.

“The ability of [the Taliban] to protect us and assist in pursuing [American citizens] and other groups — that willingness will decay, and we’re seeing leading edge indicators of that today,” McKenzie said on the Wednesday morning call. “We do need the agreement of the [Taliban] to pursue our principal objectives of getting out [American citizens] and other priority groups.”

McKenzie then offered a grave prediction about the success of the evacuation effort.

“We’re not going to get everyone out. We’ll get 90-95 percent,” McKenzie said. The call notes did not specify if he was talking about American citizens, or everyone who wanted to evacuate.

“History will judge us by those final images,” Kahl warned, according to the call notes.

After the morning update, the team at the airport sprang into action, closing several of the gates, working with the Taliban to move through additional evacuees, and developing intelligence targets related to ISIS-K.

At 4 p.m. on Wednesday, or 12:30 a.m. on Thursday in Kabul, Austin’s team at the Pentagon, Central Command headquarters and Kabul convened once more to prepare for the secretary’s evening update. At least nine officials were on the call.

According to the call notes, Vasely said he was looking to shut down Abbey Gate. At that point, the team had permanently closed two of the airport gates, North Gate and East Gate, but left South Gate and West Gate open, he said.

Leaders had already discussed with the Taliban additional security measures outside the gates, Vasely said, and planned to have Abbey Gate closed by Thursday afternoon, Kabul time.

But Abbey Gate was not closed on schedule. British forces had accelerated their drawdown from the Baron Hotel just a few hundred yards away, their main hub for evacuating U.K. personnel, and the Americans had to keep the gate open to allow the U.K. evacuees into the airport, Vasely said.

British officials couldn’t be reached for comment before publication.

The U.K. evacuees had not yet arrived when the attack occurred, the defense official told POLITICO. The bomb claimed no British casualties.

On the call, Vasely also described how NATO allies were having problems with the Taliban obstructing an earlier convoy, including Swedes, Danes, Dutch and other personnel.

Despite the tensions, the military continued relaying to the militants precise details about timelines for the withdrawal and the processes for getting American citizens through the gates, Vasely said, according to the call notes. They also allowed the Taliban to operate buses picking up people for evacuation, he added.

A senior military intelligence official not identified by name in the call notes reiterated that they were continuing to see indications of ISIS-K planning a major attack, and noted his team was in the midst of “developing targets,” he said, referring to ISIS-K. It would be “helpful” to close Abbey Gate, he said.

It was all too late. The bombing, at 6 p.m. Kabul time, came as Austin and Milley were in the White House conferring with the president. The blast ripped through the crowd of civilians and U.S. military personnel at Abbey Gate, killing roughly 200 — including 13 U.S. service members, whose remains were repatriated at a solemn ceremony Sunday at Dover Air Force Base attended by Biden, Austin, Milley and other officials.

Following the attack, Biden gave the Pentagon the green light to take out anyone who might have been involved. The military said it killed two ISIS-K terrorists and wounded another in a drone strike on Saturday, and thwarted another imminent attack on the airport on Sunday.

Biden vowed on Saturday to keep striking the extremist group amid the continuing threat to the airport.

“This strike was not the last,” Biden said in a statement. “We will continue to hunt down any person involved in that heinous attack and make them pay.”