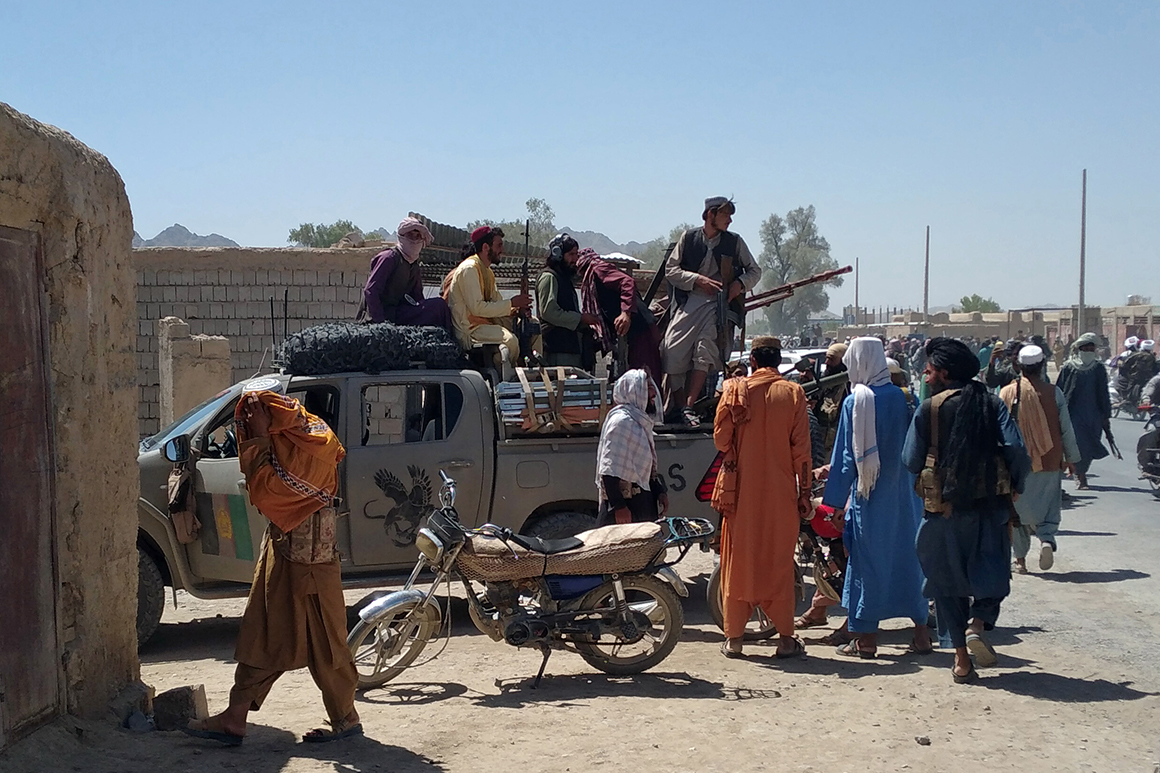 The U.S. is sending thousands of troops to help evacuate a number of civilians from the American Embassy in Kabul, the State Department confirmed on Thursday, a move that comes as the Taliban are marching across Afghanistan and capturing key cities at surprising speed.

Although U.S. officials insisted that the embassy remained open and that the move did not amount to an abandonment of the country, it was an ominous sign of how quickly Afghanistan appears to be unraveling in the wake of President Joe Biden’s withdrawal of combat troops and amid flailing peace negotiations.

The Defense Department confirmed it is sending two Marine and one Army infantry battalions to aid the operation at the airport in the Afghan capital. That’s roughly 3,000 troops.

“We expect to draw down to a core diplomatic presence in Afghanistan in the coming weeks,” State Department spokesperson Ned Price told reporters at a news briefing on Thursday afternoon. “In order to facilitate this reduction, the Department of Defense will temporarily deploy additional personnel to Hamid Karzai International Airport.”

Price did not immediately give specific numbers of people being evacuated or say what figure would constitute a “core diplomatic presence.” He also dismissed questions about whether the U.S. was being caught flat-footed, insisting that the move was the result of regular, ongoing contingency planning by the administration.

As of early July, roughly 4,000 people worked at the embassy, including Afghan employees, diplomats and contractors. Around 1,400 are Americans, a senior U.S. Embassy official in Kabul said at the time. Those numbers reflected an ordered departure in April of some workers whose on-site presence was deemed unnecessary.

“Let me be very clear about this: The embassy remains open, and we plan to continue our diplomatic work in Afghanistan,” Price said.

“The United States will continue to support consular services, and that includes the processing and operations of the Special Immigrant Visa program,” he continued. “And we’ll continue to engage in diplomacy with the Afghan government and the Afghan people. Additionally, we will continue our focus on counterterrorism.”

Although Price stressed that the embassy would remain open, he did not answer whether the mission would stay operating in its current location.

“We are always reviewing the environment and especially complex operating environments, and of course that includes Kabul,” he said.

Pressed further on the physical location of the embassy, including its potential relocation to the airport, Price revealed that the embassy evacuation “was a contingency, in fact, that we had planned for. So I’m not going to entertain hypotheticals. I’m not going to go into what additional contingencies may arise.”

In a later exchange, Price also said the U.S. had “engaged in planning exercises to prepare us for an eventuality like the one we’re talking about today.”

Amid the embassy evacuation, Price said, the U.S. will intensify its efforts to more quickly transport out of the country the interpreters and other Afghans who aided the two-decade American war effort and are being processed through the U.S. SIV program.

“Our efforts to relocate interested and qualified afghan SIV applicants will continue to ramp up,” Price said, reporting that more than 1,200 Afghans had been brought to the U.S. via Operation Allies Refuge.

“Additional flights will begin landing daily, and you’re going to see the total number grow very quickly in the coming days and the coming weeks,” he said.

Before the announcement, a “sensitive but unclassified” cable by the top U.S. diplomat in Afghanistan and obtained by POLITICO previewed the mission’s problems. Ambassador Ross Wilson wrote that Afghans who served alongside the U.S. during the 20-year war weren’t able to leave the country as the Taliban advanced. He encouraged the State Department to consider a larger group of Afghans for evacuation from the country.

“Embassy employees and close contacts that are under threat because of their work with the U.S. government must leave Afghanistan to begin processing their refugee claims but cannot get out,” Wilson wrote in the cable first reported by CNN. “Afghanistan’s neighbors have largely closed their doors to fleeing Afghans, and the Taliban control most land crossings.”

There are now serious calls from Capitol Hill for Biden to change course in Afghanistan.

“I still don’t think it is too late … for Biden to admit that this was a strategic mistake and to shift course very quickly,” Rep. Mike Waltz (R-Fla.), the first Green Beret in Congress and a House Armed Services Committee member, said about the withdrawal decision. The Taliban, he added, “understand leverage and they understand, not to be too crass here, but bombs on foreheads.” Waltz also called for the architect of the U.S. role as broker of an Afghan peace deal, Zalmay Khalilzad, to resign or for Biden to fire him.

The U.S. has experience operating embassies in dangerous places, though sometimes on skeletal staffs. It has kept a massive embassy in Baghdad open despite many years of intense violence and threats against the mission in Iraq.

At the same time, in light of the 2012 attacks on the U.S. diplomatic facilities in Benghazi, Libya, the State Department has been exceptionally cautious about the safety of its staff. Diplomats are often highly restricted in their movements.

As the evacuation plans were being prepped this week, U.S. and international officials have been urging the Taliban to cease their offensive and not take Afghanistan by force. The militants have captured several provincial capitals in recent days, with the latest reports indicating that the major cities of Herat and Kandahar were almost in their grip.

Foreign leaders have warned the Taliban that if they try to take Afghanistan by force, they will be an isolated regime and that Afghanistan as a result will lose, among other things, international aid funding. It’s unclear, however, how concerned the Islamist militia is about these threats.

The Taliban ruled Afghanistan in the late 1990s despite little international recognition. Their rule was marked by severe repression, especially of women. Already, thousands of Afghans have been leaving the country in anticipation of an all-out civil war or a Taliban victory.

There were reports on Thursday that the Afghan government had offered a power-sharing deal to the Taliban, but that could not immediately be confirmed. The two sides have been meeting in Qatar, but the talks have made little progress during the recent Taliban advances.

Erin Banco contributed to this report.