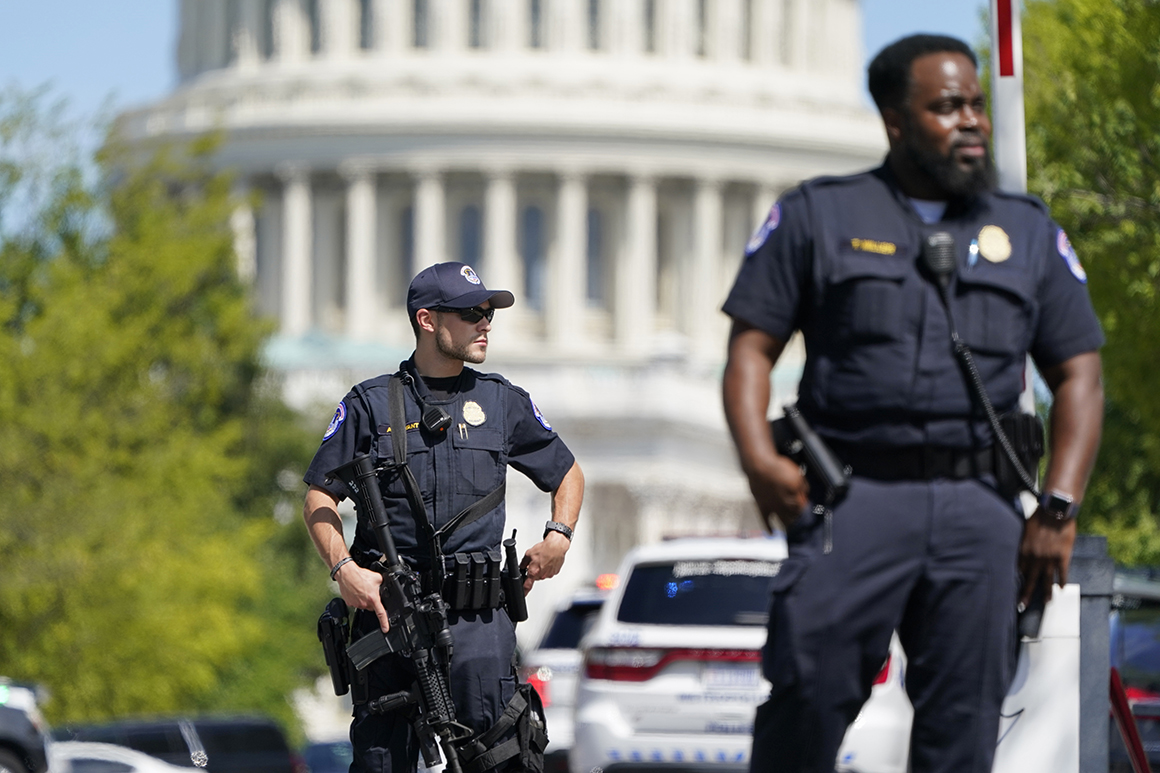 Capitol Police arrested a man Thursday who claimed to have explosives in his truck after a tense five-hour standoff, ending the immediate threat to a Capitol campus that is still reeling from the deadly insurrection earlier this year.

The suspect, who was identified as Floyd Ray Roseberry of North Carolina, was “taken into custody without incident,” according to U.S. Capitol Police Chief Tom Manger. Police officials later said that a bomb was not found in the vehicle, “but possible bomb making materials were collected from the truck.“

The lengthy standoff began Thursday morning when Roseberry allegedly drove his pickup truck onto the sidewalk in front of the Library of Congress, claiming to have bombs in the vehicle.

It wasn’t immediately clear whether Roseberry’s vehicle did in fact contain explosive devices. Manger said the area would remain active for several hours as officials investigate whether the truck had explosive devices or other deadly weapons.

“We don’t know if there are any explosives in the vehicle. It’s still an active scene,” Manger told reporters Thursday afternoon. “We still have to search the vehicle and render the vehicle safe.”

Authorities gave the all clear at Cannon House Office Building around 4:45 p.m.

Manger said there is no indication Roseberry was acting with others and law enforcement officials do not have reason to believe there are other explosive devices in the city. The police chief’s assertions come after Roseberry said on social media earlier in the day there were “four” additional explosive devices in the surrounding area without providing additional details.

There was “nothing that serious” in Roseberry’s criminal background, according to Manger, who said law enforcement officials were still trying to identify a motive.

“We do know that Mr. Roseberry has had some losses in his family,” Manger said. “I believe his mother recently passed away, and we spoke with members of his family, and there were other issues that he was dealing with. There’ll be more on that at a later time.”

Roseberry’s surrender followed five tense hours of negotiations between him and law enforcement officials including the Capitol Police, D.C. Metropolitan Police Department, the FBI and the Bureau of Alcohol, Tobacco, Firearms and Explosives.

“Over the course of time we tried to negotiate with Mr. Roseberry. We first started doing that with a whiteboard, just writing messages back and forth. We used a robot to get a telephone down to him, but he would not use the telephone,” Manger detailed to reporters in an update Thursday afternoon.

“But shortly after we had delivered the telephone he got out of the vehicle and surrendered, and the tactical units that were close by took him into custody without incident.”

As police were trying to negotiate with Roseberry, he uploaded multiple videos to social media from his truck viewed by POLITICO in which he espoused anti-government views, blamed Democrats for the fallout in Afghanistan and demanded to speak to President Joe Biden before he would consider standing down. Roseberry was a registered Republican, according to North Carolina voter records.

Facebook eventually removed Roseberry’s profile from the social media site but only after he was allowed to livestream for several hours from his truck, holding what he claimed to be an explosive device in his lap.

The threat had been a test of Manger’s leadership in his first few weeks on the job. The chief took charge of a force rattled by the Jan. 6 insurrection and multiple incidents since then. Dozens of officers have left the force and many others have grappled with the fallout of the deadly attack — one officer died in the days after Jan. 6 and another died by suicide. One other officer died in April when a man tried to use a vehicle to attack the Capitol.

Manger had pledged to turn the page and said it was his priority to retain officers and hold more briefings with the press. He and other law enforcement officials briefed the media twice during the bomb threat and sent out information through social media — a change from the aftermath of Jan. 6, when details from law enforcement leadership about the attack were scarce.

“The immense gratitude of the Congress is with all law enforcement officers who today and all days sacrifice to keep the Capitol Complex and those within it safe,” she said in a statement.

During the standoff, police evacuated several buildings on and around the Capitol complex out of an abundance of caution. Most, if any, lawmakers are not in the building, with the House not scheduled to return for votes until next Monday.

For many Hill staffers, the emergency alerts renewed a sense of anxiety for those who had been in the building for the Jan. 6 riots, with some campus-wide security questions still unanswered. Pipe bombs were found at both the RNC and DNC on Jan. 6 — the campaign headquarters for both parties, located near Capitol Hill — but the perpetrator was never caught.

Some Capitol Hill staff and Library of Congress personnel were working on-site Thursday when the evacuations began, though it’s unclear how many staffers were in the building, with many offices allowing their staff to work from home. Some congressional offices that had been working in person opted to send their employees home by Thursday afternoon, amid the police investigation.

Capitol Police first alerted staffers to the suspicious vehicle threat shortly after 9:30 a.m. Eastern. The call to evacuate the Cannon House Office Building on Thursday went out just after 10:00 a.m as staff were told to “remain calm and relocate.”

Staffers in the Cannon and Jefferson buildings were told to use underground tunnels to move to other locations, and those in several other buildings were instructed to stay away from external doors and windows. Staff in the Madison building, which is an extension of the Library of Congress, were also ordered to evacuate.

Metro trains bypassed the Capitol South stop as the investigation continued. Capitol Police relocated press to the opposite side of the Capitol while they dealt with the threat. Officers waved drivers away from the avenues leading up Capitol Hill, and some of the surrounding blocks were barricaded with dump trucks to prevent cars from driving through.

Earlier in the week on Tuesday, Capitol police addressed a suspicious package near the Library of Congress but the road closures and investigation were ended in just under an hour.

Katherine Tully-McManus contributed to this report